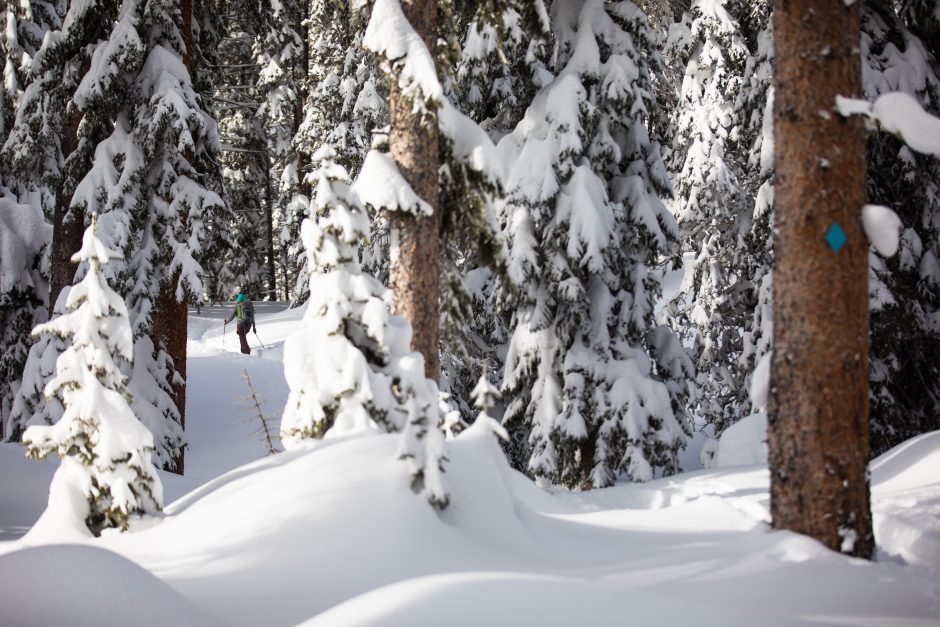 One of my favorite things about Colorado ski resorts is what you don’t know; in particular, I’m in love with the long list of powder ghost towns dotting the mountainsides.

You see, not all of the Colorado ski resorts come from well-known names like Vail Mountain, Breckenridge, or Aspen. While all of those inbounds ski hills are awesome, Will and I are falling in love with the exploration involved with a different type of Colorado ski resort: the abandoned resort.

Unbeknownst to me until the past few years, Colorado is covered with ski hills that couldn’t quite hack it, eventually closing their doors. But while lift operations ceased and parking lots turned to rubble, those ski runs are still lining the hill, waiting to be discovered once again. Sure, a few errant baby pine trees sprout up in the center of the ski runs, but if you know what you’re looking for–and have the endurance to get there!–you can explore some perfectly safe ski runs full of powder but without the crowds of people. 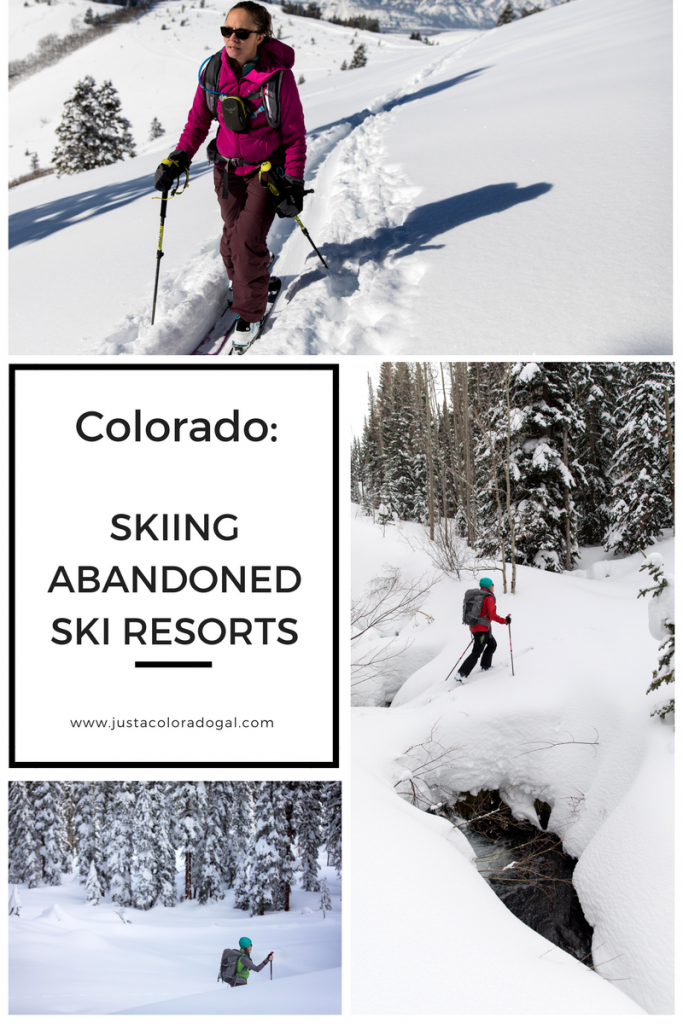 Last year was our first foray into these Colorado ski resorts {or powder ghost towns!}, exploring both Geneva Basin {an abandoned resort} and Seven Utes {a resort that fizzled before it ever happened}. Knowing how much fun both those adventures were, Will and I set our sights on Mesa Creek, also known as the Old Powderhorn Ski Resort.

You see, these days, there is a “new” Powderhorn Ski Resort, a small ski hill on the Grand Mesa in western Colorado. But before the existing Powderhorn ski area was in existence, locals used the Mesa Creek ski area, lovingly referring to it as Old P.

Founded in the 1940s by the Grand Junction Ski Club, Mesa Creek soon had a permit from the Forest Service. By 1950, the Colorado ski resort had two rope tows and two ski runs. Two Poma lifts eventually followed and thousands of skiers enjoyed Mesa Creek–until the glitzier, newer Powderhorn Ski Resort down the hill usurped it. Eventually, all the ski traffic moved to Powderhorn and Mesa Creek closed its doors.

But those ski runs still remain! 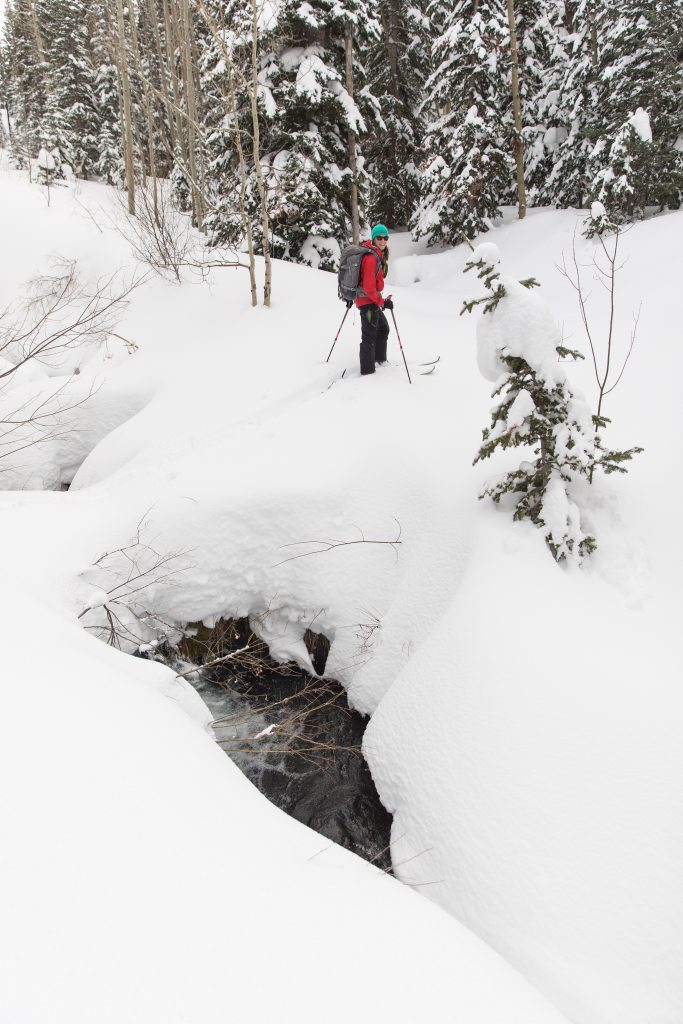 These days, the base of Mesa Creek sits on the side of Highway 65 as the road curves its way up the north side of the Grand Mesa. Dozens and dozens of locals use the base of the ski runs for a kick-ass sledding spot. Even more locals forgo the cost of a lift ticket at nearby Powderhorn and catch a ride up Highway 65 to get dropped on the east side of Mesa Creek. You see, all of the east side of Mesa Creek is accessible by road, so skiers who don’t have backcountry gear can easily drop in without the sweat equity of hiking their own way up.

But naturally, that’s not how Will and I roll. We loaded up our backcountry gear and headed up the hill, determined to go as far west as we could in the resort. It took us merely 10 minutes of skinning before we left the crowds of sledders behind; we never saw a soul for the remainder of the day.

We were searching for an elusive bridge, a tiny structure that we had read was the only place to cross Mesa Creek to access the western terrain. But after two hours of skinning upwards along the east side of the creek, we realized we likely missed the bridge…or it didn’t exist. 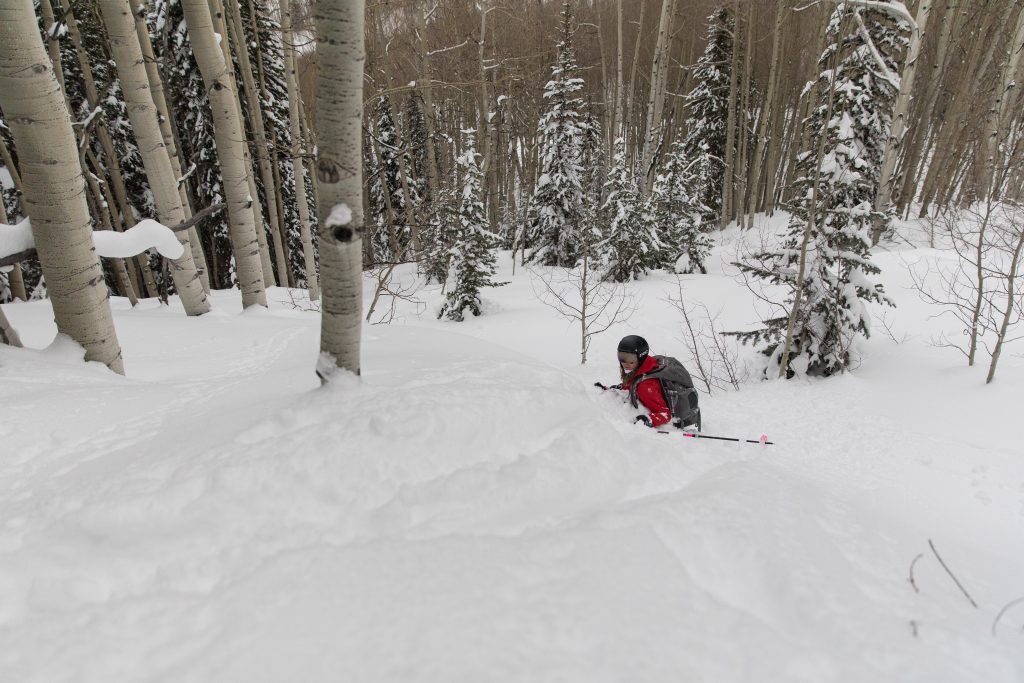 You know, that’s a funny thing: we knew there was theoretically a bridge somewhere but everything kinda looks the same when it’s buried in snow. And that’s the other thing about all of these abandoned resorts: it’s easy enough to learn about them and where they are, but the majority of the info stops there. Exploring a powder ghost town is a choose-your-own adventure of sorts– just how I like it!

We eventually gave up on the elusive bridge, chalking it up to an online rumor. Instead, after two hours of Will breaking trail in thigh-deep snow {bless my husband!}, we began scouring the small stream for a safe natural crossing. Finally, we saw a perfect spot: a moose led the way! 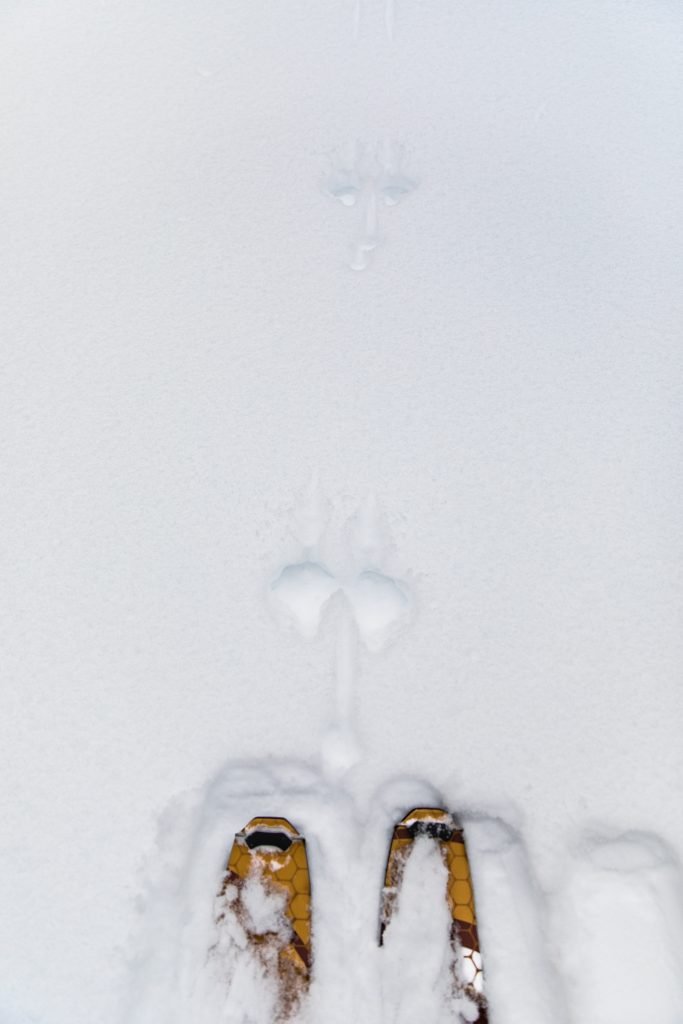 Will had spotted a set of moose tracks traipsing uphill. Those lanky legs carried that moose to a perfect natural bridge that was still intact. We studied it carefully, making sure the snow wouldn’t collapse as soon as we put our body weight on it. It was solid! Besides, I figured if the bridge could hold a moose, it could certainly hold me! {Well…..I like to think so anyway!} 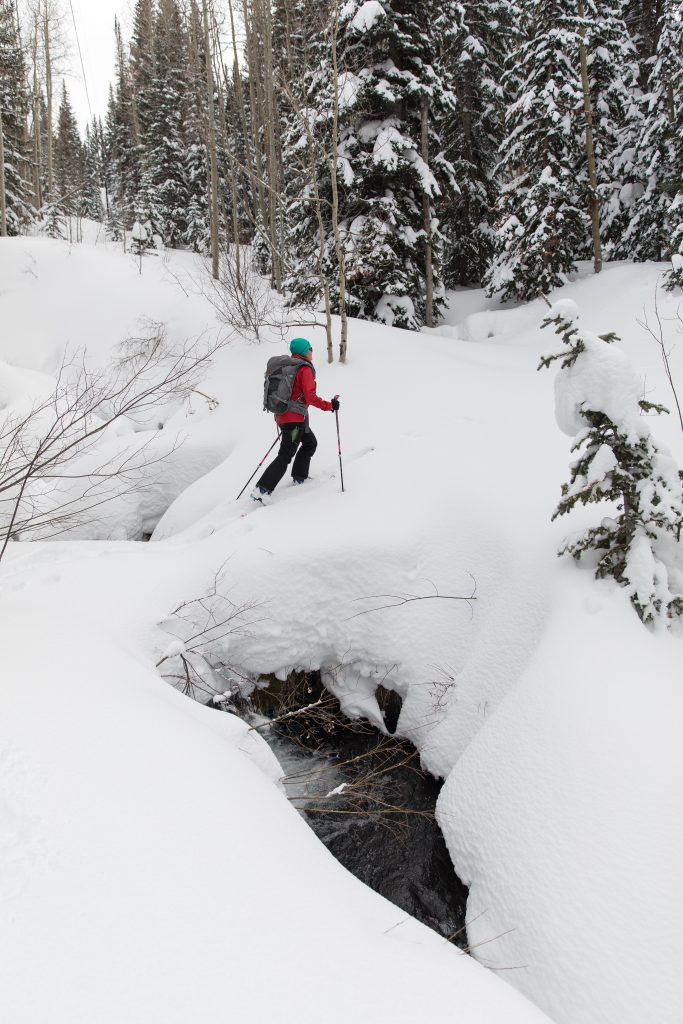 From there, we had options. We stared at the hill, eyeballing a few former runs that were pristine and untracked. Thanks to our uphill foray on the wrong side of the creek, darkness was setting somewhat soon so we didn’t have as much time as hoped to traverse west. Instead, we eyeballed a snowy knoll in the distance and headed that way. Time to ski!

The run we stumbled on was nothing crazy or steep. I’d suspect that it was a beginner-intermediate run back in the day. That said, it held months of untracked powder and nary a soul had ducked into the trees. We hooted ‘n hollered all the way down, splashing each other with face shots and zipping in between the trees. That’s the thing about backcountry skiing: for me, it doesn’t matter how difficult the terrain is because the fun of it comes with the company and the environment. 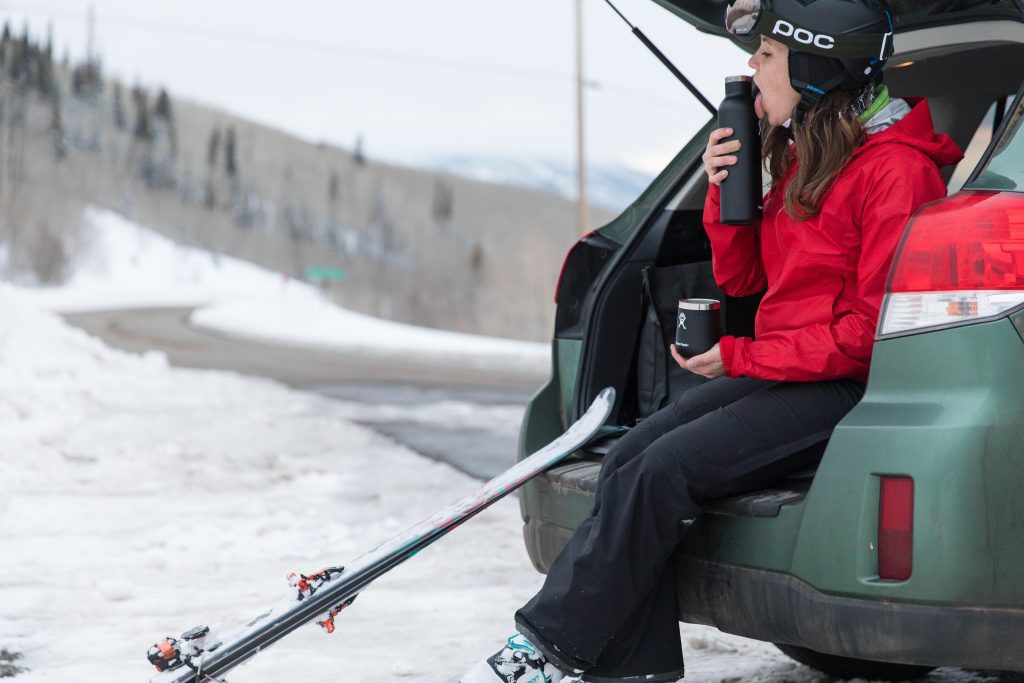 It doesn’t matter which of the Colorado ski resorts you find yourself at: apres wine in the car is always a good idea!

The single run was all we had time for but our smiles stretched from ear to ear as we slowed near the base of the run. As luck would have it, we had stopped right in front of the damn bridge! Sure enough, there it was in all of its bridge glory. It was much closer to the base than we had originally thought, so we had skinned right by it without a second glance. Goes to show you that everything looks different in winter!