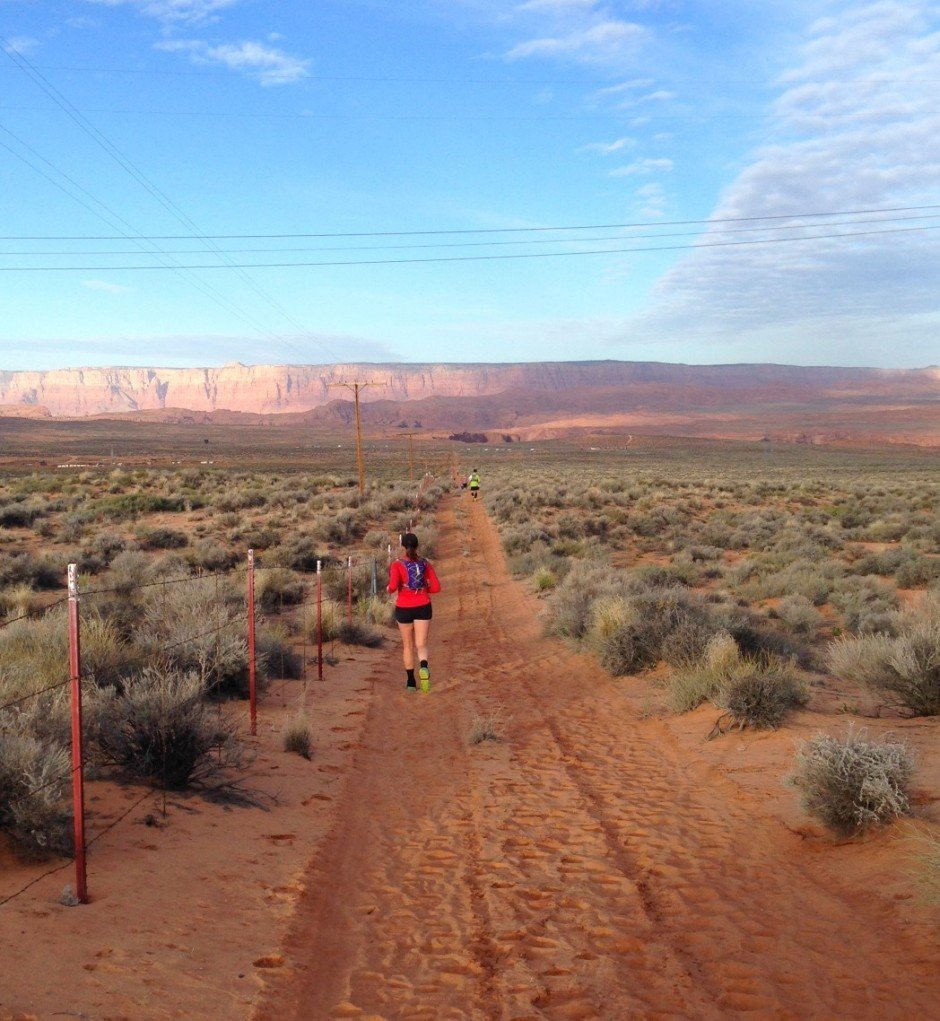 If I learned anything from running 34 miles, it is this: it takes a whole lotta prep work! And, if you know me, you’ll likely know that organization isn’t my strong suit. I have my own system, of course, but it’s fairly unrecognizable to the rest of the world!

That said, I really tried to put thought and effort into my fuel and gear prior to running the ultra. Not only would it be farther than I had ever run, but it was also copious amounts of sand. In short, I was dealing with two variables that I had never experienced.

In the end, I’m pretty happy with both my gear and my fueling. Since runners tend to like the details, I thought I would share.

I’ve written about my food issues ad nauseum over the past few months, so I won’t go into the details again. I will say that it was a bit of a stresser knowing that I shouldn’t touch any of the food at the aid stations. The volunteers were so friendly! And did I mention they even had BIRTHDAY CAKE at the Horseshoe AS to celebrate recent and upcoming birthdays? And that my birthday was a mere seven days later?!

Truly, it was tragic. 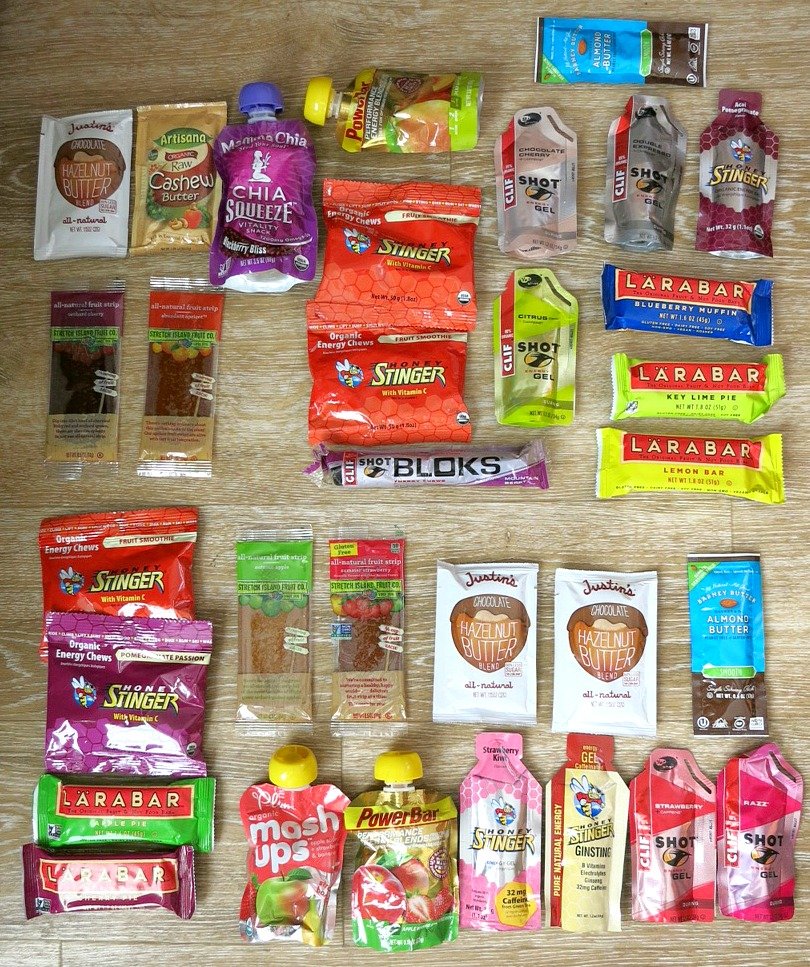 However, it would be far more tragic if my lungs seized up on the course, so I played it safe and only ate what I brought. In no particular order, this included: Honey Stinger Organic Chews, Justin’s Hazelnut Butters, Honey Stinger Energy Gels, Lara Bars, fruit leather, Power Bar Performance Energy Blend Pouches, and Clif Shot Energy Gels with the 2x caffeine. I could only find the double caffeine in an espresso flavor that I hated, but I liked the energy enough to suffer through the taste. I also used Tailwind in my bladder, which was convenient since it was the sponsor of the race and available at all of the aid stations.

The downside to my lung/food situation is that I had to pack in a ton of food. My vest was jam-packed with various fuel sources and I even left half of them in my drop bag at mile 21. It actually made my pack heavy! In the end though, it worked for me. At one point, my stomach began rumbling and I told Heidi that she may see me disappear behind some desert shrubs! Fortunately, I was just hungry and after cramming an entire Lara Bar in my mouth, the grumbles went away.

Another trick I relied on was mixing the double caffeinated gel in with some water and sipping on it while I ran. I saw Heidi do this when she ran Run Rabbit Run 100 and it seemed logical. My Jenny vest has two 10-oz bottles attached to the front, so I would dump a gel in there with the water. I swear, it gave me wings! 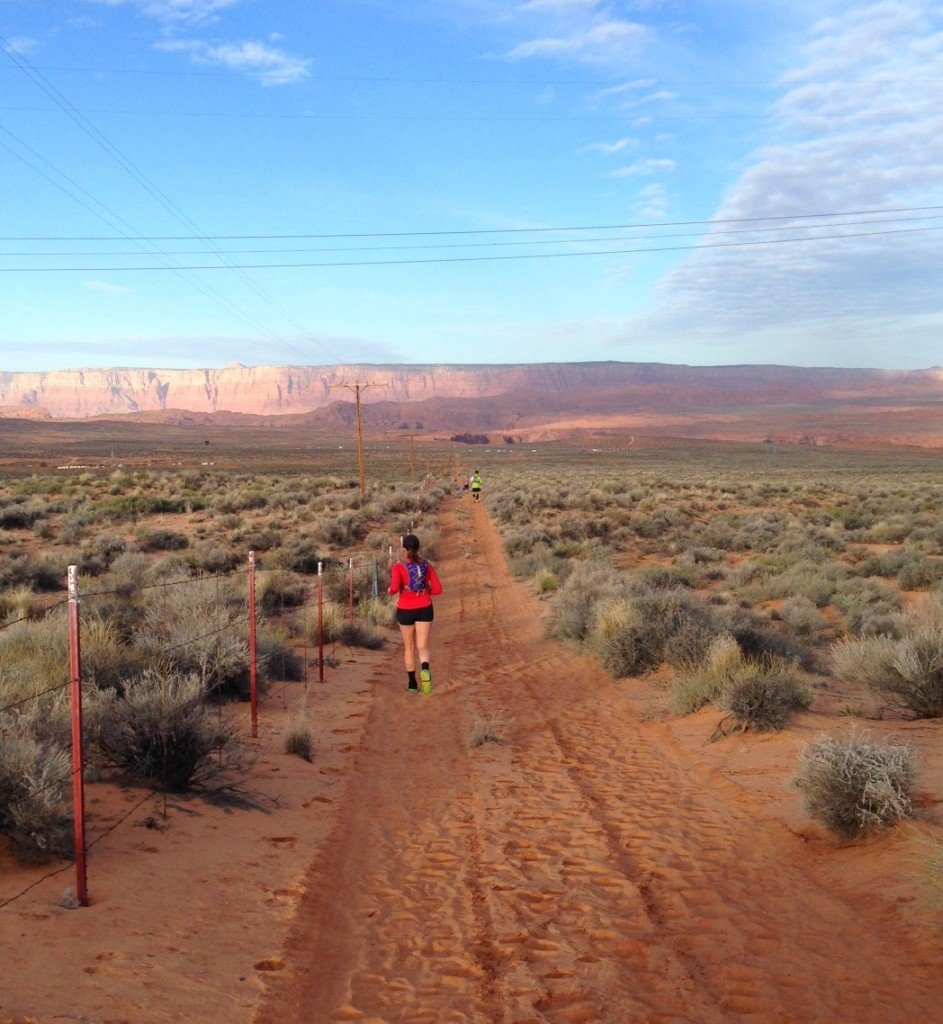 From here on out, all photos are from Heidi’s iPhone

The final piece of the fuel puzzle was salt tabs. Marissa  told me a story of her first ultra where she grew sleepy. Someone at an AS finally gave her a salt tab and she was able to bounce back. Heidi and I both realized that salt tabs are controversial, but personally, they helped a ton. I only took three throughout the day and made sure to take each tab with at least eight ounces of water. I really felt the energy return to my body within 30 minutes of the tab going down, so I’m a believer.

The race began at 7am so the sun was just beginning to crest the horizon. It was still chilly, but fortunately Arizona temps meant it was warm enough for me to shed my coat before the start. In the end, I found myself lining up at the start decked out entirely in New Balance apparel. 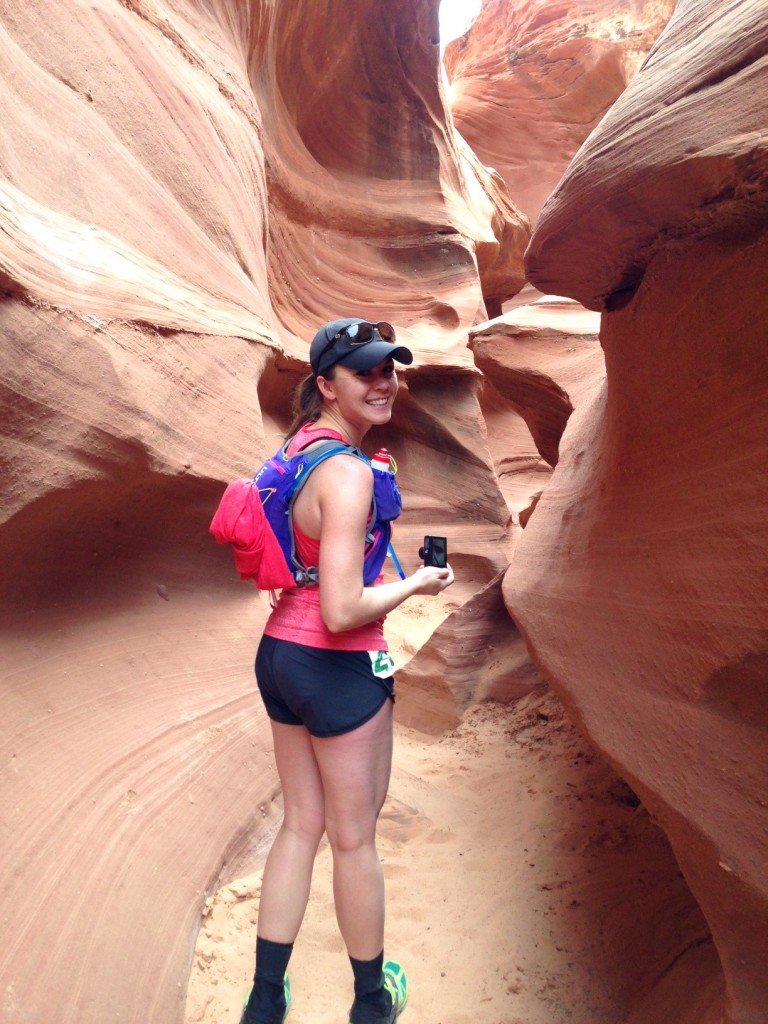 I had waivered between shorts and capris but finally settled on my faves: the New Balance Impact Shorts. I love these shorts and own them in at least four colors, so I knew that I would be comfy. With predicted temps in the mid-50s, I threw on both the New Balance Seamless Tank and their Merino Wool Half Zip {neither of which are available in stores til Fall, 2015.} I’ve been testing both pieces out since Winter OR show and I’m madly in love with them. The tank doesn’t ride up or chafe, and the Merino Wool Half Zip kept me pleasantly warm while wicking away sweat. I removed the long sleeved around mile 9, but it was nice to have on my pack…just in case!

{Side note: Heidi didn’t think the temps were quite as cozy as me! Ms. Arizona wore capris and {I think} three tops? How she ran the entire day in a long sleeved shirt is beyond me!}

My gaiters were a huge help and I’m thankful that Heidi cued me into them. We don’t deal with a ton of sand in Colorado so it never occurred to me that I would need a pair for running! Fortunately, I already owned a pair by Icebug so I brought them to Arizona, and wore them–for the first time ever– on race day. Yes, I know that’s a major no-no but it happened and it worked; I was sand-free for 34 miles!

I used my Ultimate Direction Jenny Vest which has quickly rocketed to the top of my “favorites” pile. I had this vest crammed to capacity but it still sat comfortable, didn’t jostle, and never chafed. Honestly, it’s the only vest or pack I’ve worn that doesn’t rub underneath my arms!

I stuck with my tried ‘n true Injinji toe socks, as well as my beloved Hoka Mafate Speeds. Per usual, I threw on my old Columbia hat that needs a deserved retirement! 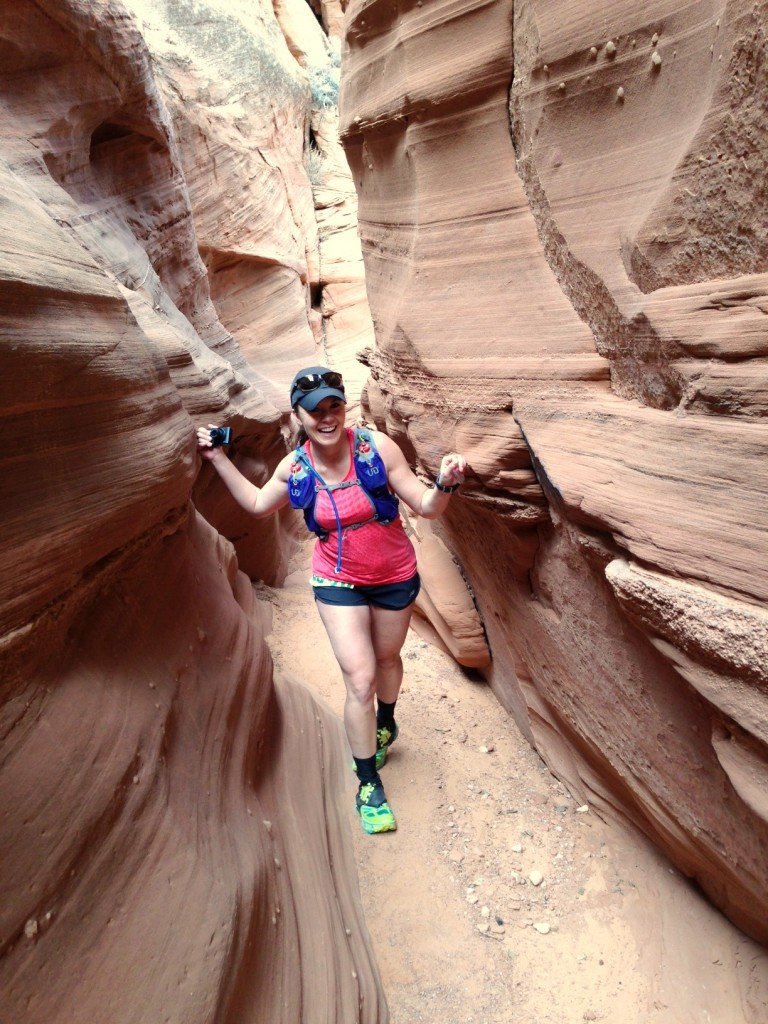 This was definitely an interesting experiment in terms of CrossFit and ultra running. Throughout the entire “training cycle,” I CrossFitted three times per week and ran three times per week. I made sure to never miss a long run, but I also never did a single run longer than 16 miles {which, ironically, was my PDR before this race.} I did a few back-to-back runs, but more frequent were back-to-back CrossFit/running combos. For example, I’d do a heavy leg day at the gym with squats, and then I’d do my long run the next morning on tired legs. Or, as was the case with my final 16 miler, I skied the next day.

Basically, I tried to stay moving but I didn’t let running take over my life. I’m not a runner who can only run and be content with that. I’d get bored, and truthfully, my body would fall apart. But, I’m also not out there setting speed records and I suspect my training program would need some updating should I decide to become more serious.

I do believe that CrossFit helped a ton since my legs really didn’t ever fatigue. I also think all of my outdoor activities gave me some cross-training assistance. Sure, I hadn’t run back-to-back days, but I had done plenty multi-day backcountry ski touring trips. It’s not running, but it’s still time on my feet, day after day. Besides, a hydration pack weighs a lot less than a backpack for an overnight trip!

I’m not here to say my way works best, but I am happy with how the two sports blended together for me. 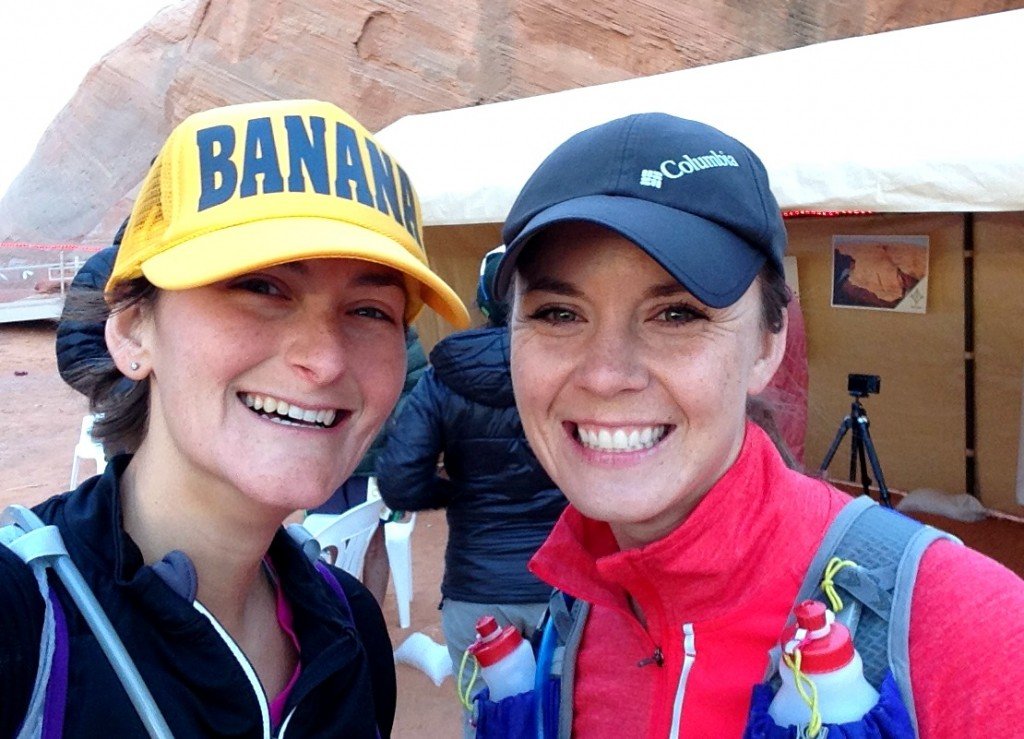 Who knows! I was originally thinking of attempting a CrossFit comp to balance things out, but the one I was eyeballing is full. Le sigh. Naturally, I immediately starting scrawling through UltraSignup when I got back from Arizona, but Will quickly reminded me that we have a wedding to plan. {Haha, oh yeah!} Of course, that doesn’t mean that I can’t register for a race AFTER the big day in September, right?!

Why All Women Should Road Trip Solo