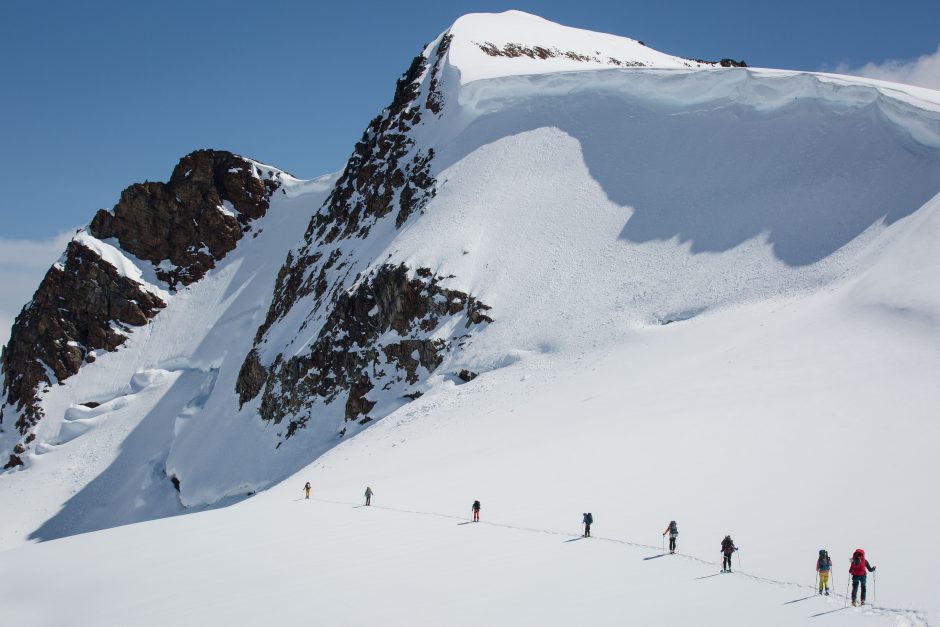 It all began in December, 2012 when Will and I celebrated our first Christmas together. As a ridiculously generous Christmas present, he gifted me my very first backcountry ski setup: skis, bindings, boots and skins. Neither of us realized it at the time, but it was the beginning of our love for backcountry skiing.

Since then, I’ve written about many of our backcountry skiing adventures. {For some of my favorites, read about Nokhu Hut, skiing Quandary Peak, visiting the Lower Montgomery Yurts, or traipsing to an abandoned Geneva Basin.} There is something absolutely peaceful about touring through the Rockies during the winter. Maybe it’s the silence, maybe it’s the utter stillness, maybe it’s the beautiful blanket of sparkling white snow. Either way, we both love it. 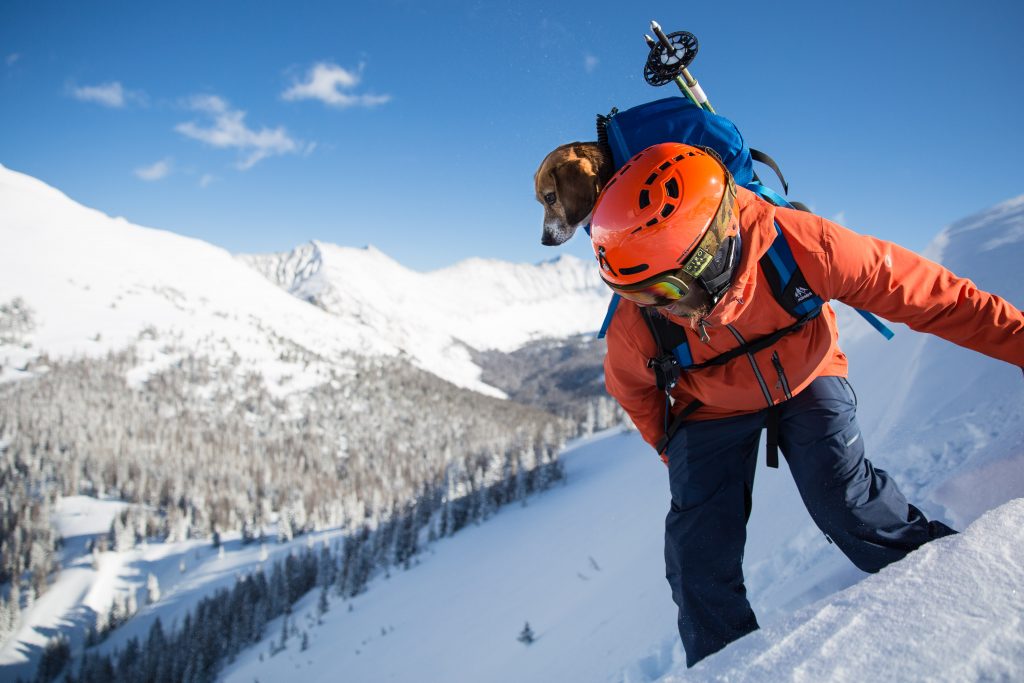 That said, getting into backcountry skiing is not easy and quite a few of you have emailed me and commented on various posts, asking for tips on how to start. Happy to oblige! Today is the first in a two-part series detailing my thoughts on backcountry skiing for beginners. Enjoy!

What is backcountry skiing? 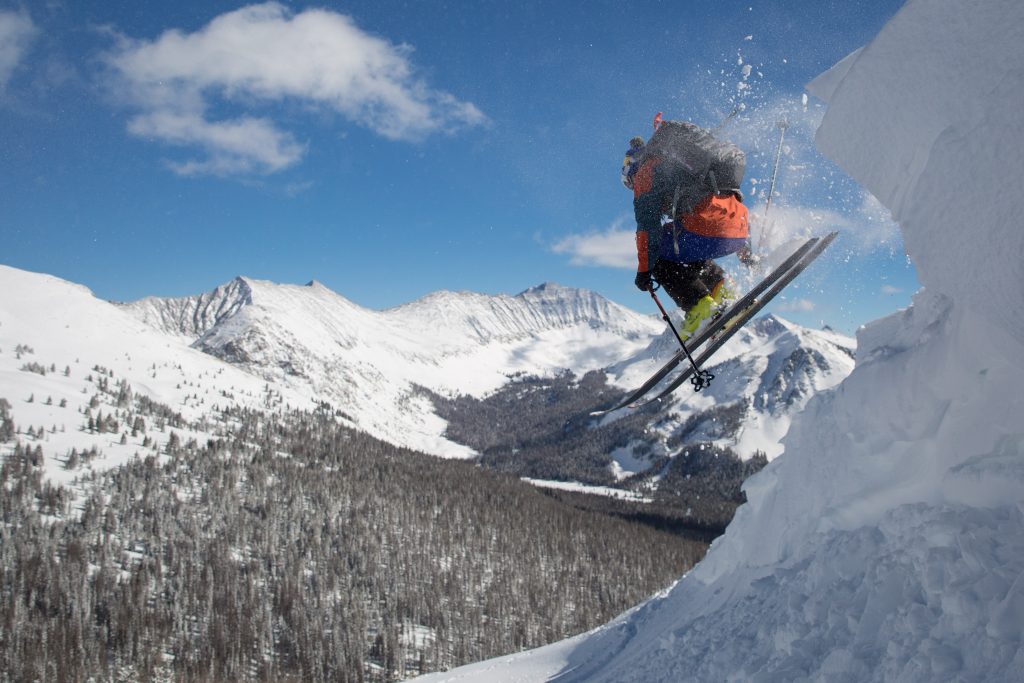 For awhile, the term sidecountry was widely used to indicate terrain that sits next to a ski resort. For many, this is an easy way to get into backcountry skiing: catch the lift to the top of the resort, traverse out of bounds, and then ski the fresh terrain. However, the outdoor industry avoids the term sidecountry now because people realized that many individuals considered sidecountry less dangerous than backcountry.

Y’all, the snow slides just as easily regardless of whether you access the terrain via a lift, a car or your own two feet. It doesn’t matter how you access it: all backcountry snow is dangerous and needs to be treated with respect. {Nowadays, this type of terrain is simply referred to as lift-accessed backcountry.} 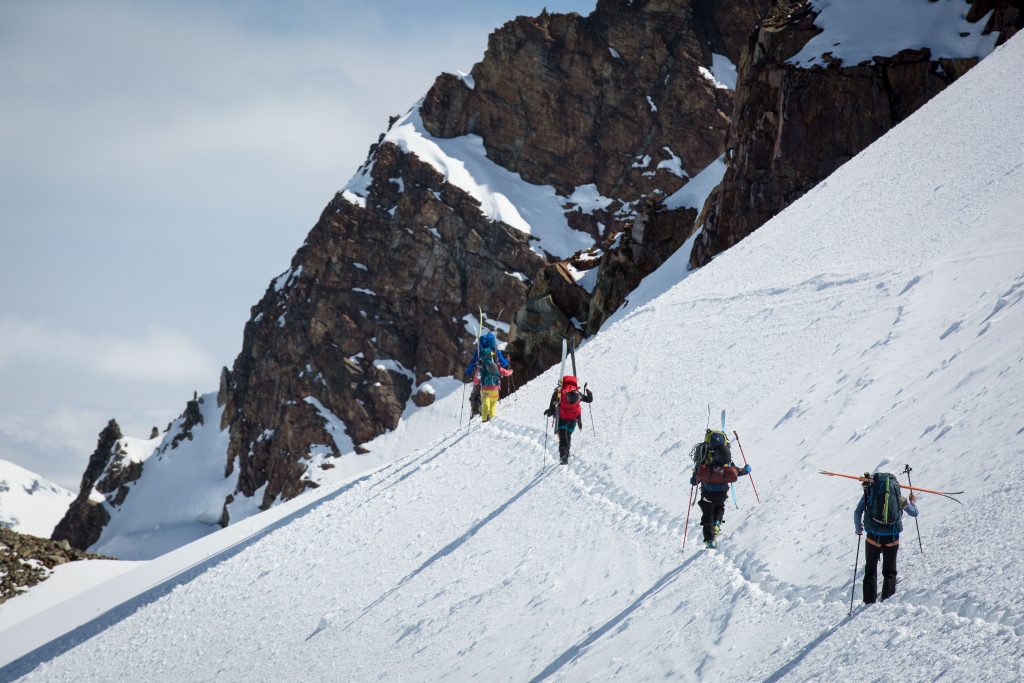 For “regular” backcountry skiing that does not involve a chairlift or car, you will be using your own two legs to climb to the top of a peak. This is done by using the proper gear {namely skins and a different type of ski binding}, but I’ll chat about that in the part two.

How Do You Know When You are Ready for Backcountry Skiing?

Maybe you clock 100 ski days per season and can easily tackle any double black diamond run on the mountain. If that’s you, it’s safe to say that you likely have the ability to handle anything in the backcountry. 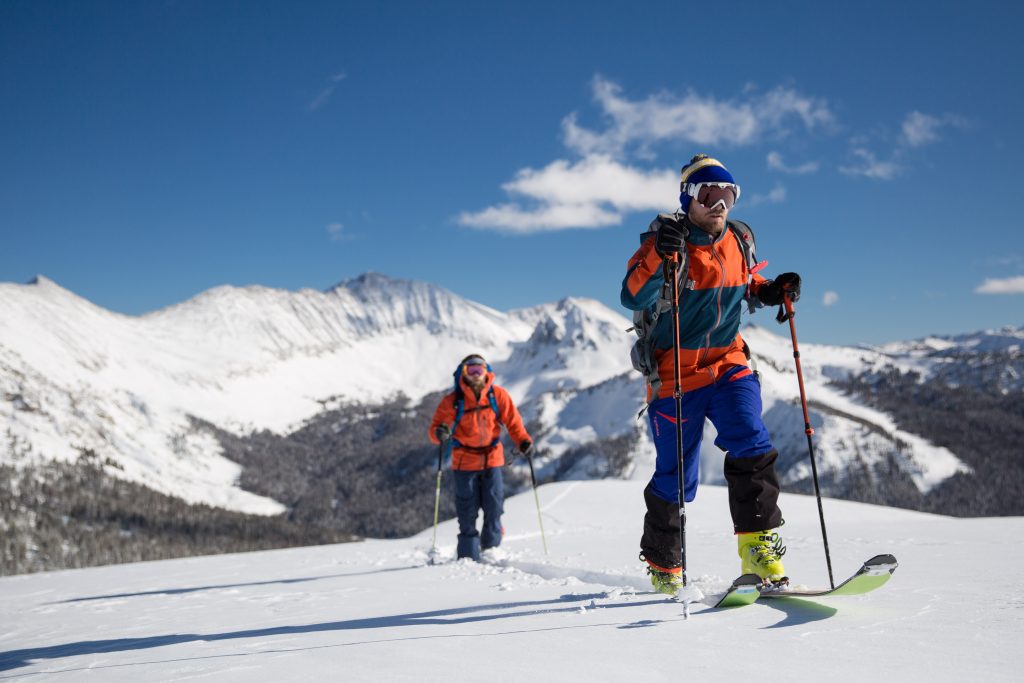 But what if that description isn’t you? That’s okay too. It’s a common misconception that you have to be the top 0.1% of ski talent to consider the backcountry. However, it is best if you are very comfortable on skis and in good physical condition. Not only do you want to ensure you can descend what you climb, but there is always the potential of an avalanche where it *could* come down to your ski abilities saving the life of a friend.

If you are just starting out, consider tackling lift-accessed backcountry first to get a feel for the sport. Once you know you can handle the challenges of skiing in the “wild” and ungroomed terrain, move on to beginner, low-angle slopes. Of course, there is one massive step that comes before anything in the backcountry…

How Do You Prepare for Backcountry Skiing? 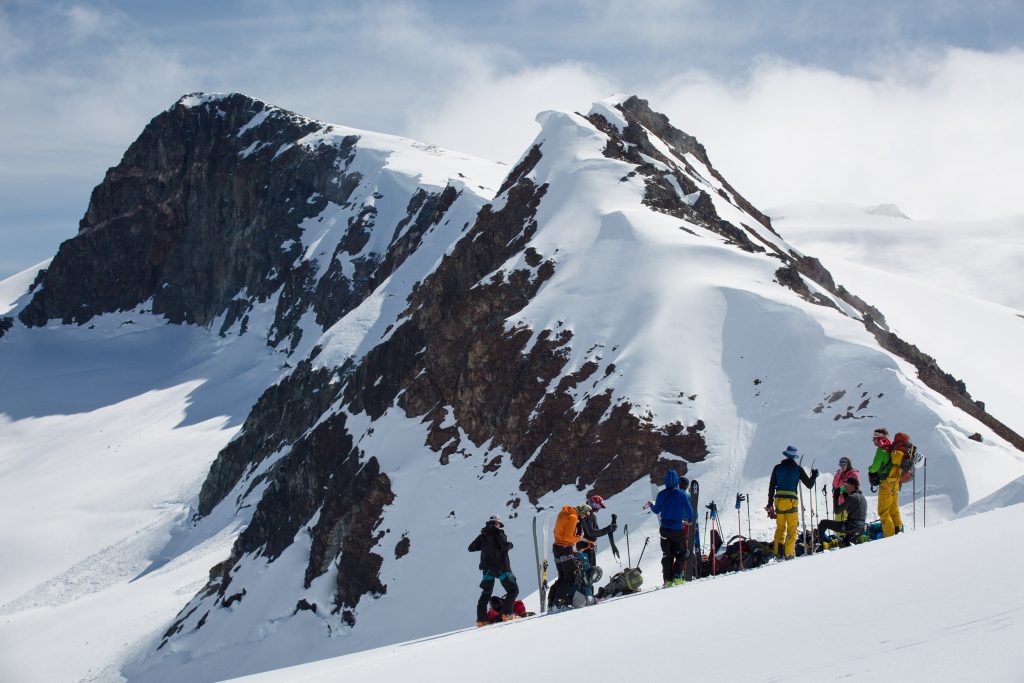 After purchasing your gear, my opinion is that your next step should be taking an avalanche safety course.  Will and I took our AIARE Level I course back in March, 2013, and it was incredibly eye opening. Our class was a two-day session in Rocky Mountain National Park. The first day was devoted to snow science: what does “bad” snow mean, how slides are caused, and what types of tests skiers can perform to examine the snow’s safety levels. The second day was more sobering as we focused on search and rescue: how to work your beacon and probe and how to handle single and multi-body burials.

Guys, I know many people that go into the backcountry without taking an avalanche safety course, frequently citing the cost as the reason. Naturally, this is an individual decision for everyone and I can’t force anyone to do anything. However, this course was invaluable for me {We are hoping to take our Level II someday soon!} It was a lot of good information even though I know I didn’t retain everything. But at minimum, it opened my eyes to the world of snow science and made me realize how much I don’t know. This awareness has made me extra vigilant in the backcountry simply because I now realize how much I may be missing and as such, I’m more cautious in my choices. 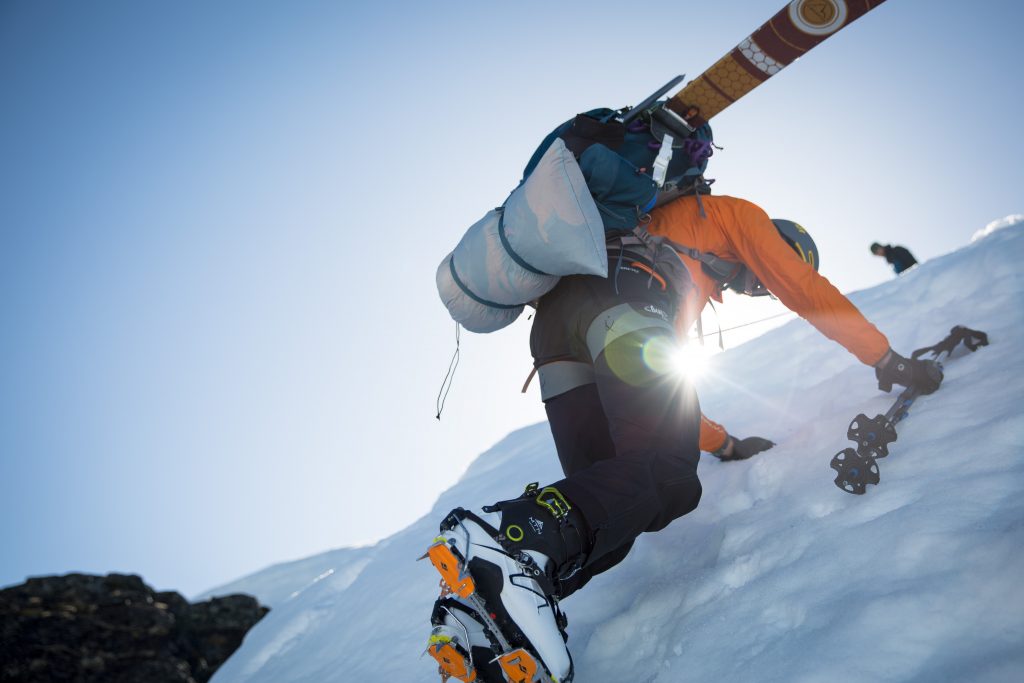 In addition to taking an avalanche course, familiarize yourself with the Colorado Avalanche Information Center {or whatever your state uses.} This site has a wealth of information, including forecasts and safety ratings for any particular area of the state {ratings vary from 1 = low avalanche danger/green light to 5 = extreme avalanche danger/black light.} It’s a great source to examine before any potential trip so you can evaluate whether your chosen terrain is safe or whether you should be looking elsewhere. It also details accident reports from various reported slides around the state. The reports are super informative if you’re looking to piece together more information on what type of conditions caused a particular type of slide. Will and I regularly look at these and have learned a lot. 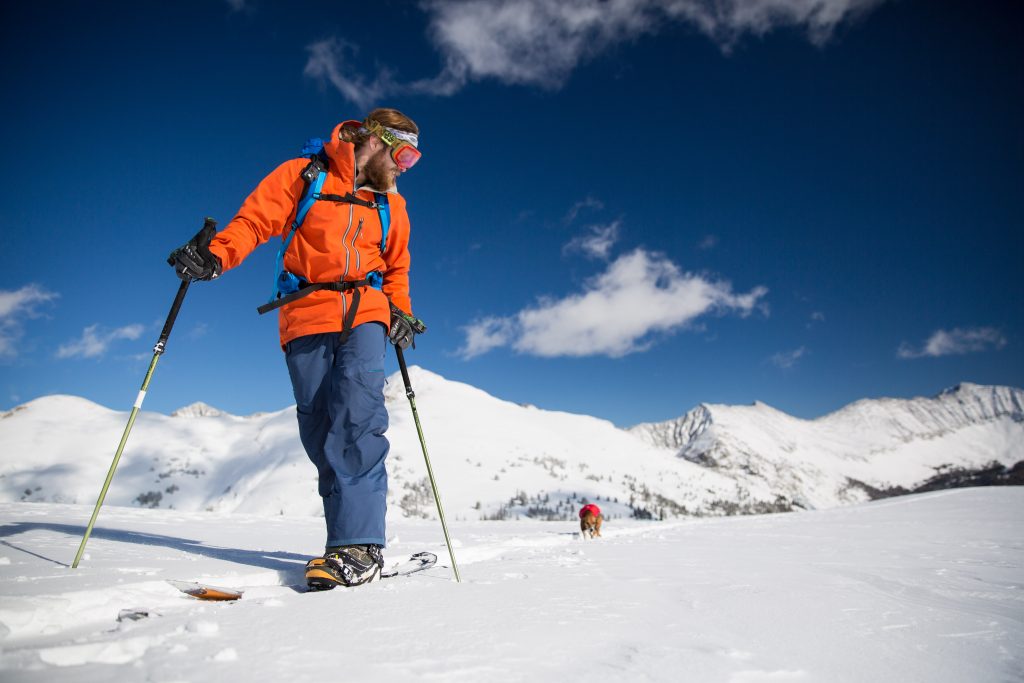 Lastly, read up so that you can understand all the lingo associated with backcountry skiing. Reading a slide report won’t make much sense if you don’t know what “faceted snow” or a “terrain trap” mean!

Do You Understand the Potential Consequences?

Backcountry skiing is inherently dangerous and the potential consequences are severe. I don’t say this to scare people away from the sport, but I truly want everyone to understand what they are considering when they head into the backcountry. Colorado in particular has notoriously sketchy snowpack; in fact, it is easily considered the most volatile in the country, thanks to our constant pattern of freezing and thawing. {This is why spring ski mountaineering is so popular. The snow is heavier and has largely settled, eliminating a huge percentage of risk.} 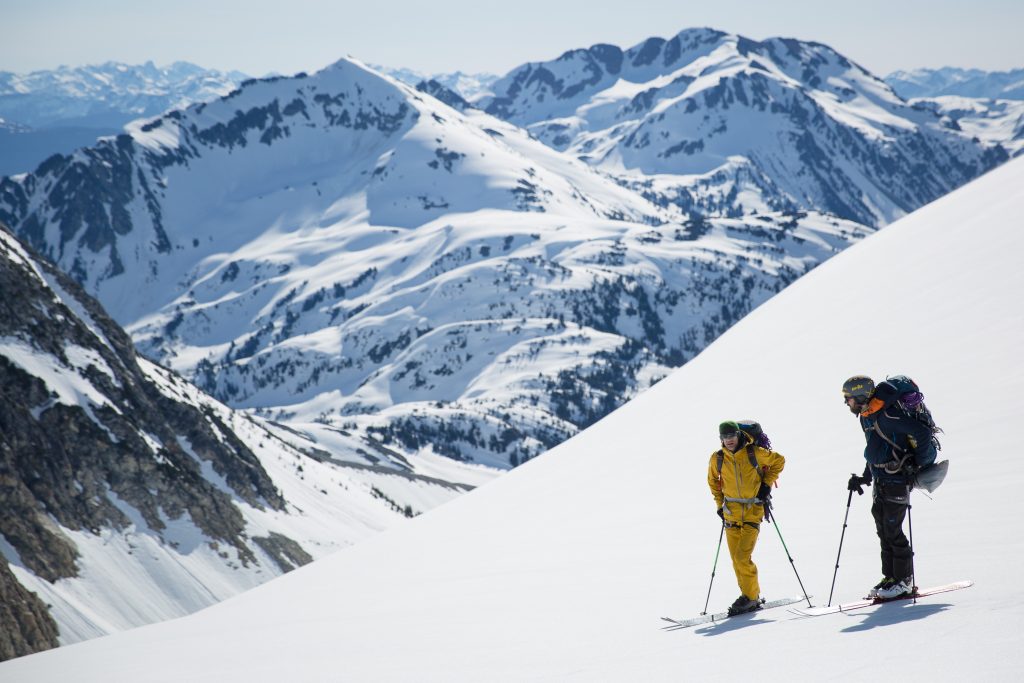 People die every year while exploring the backcountry in the winter, and it’s not always skiers; these rules apply to snowshoers and snowmobilers too.  That said, many of the avalanche deaths come from individuals being unprepared or unaware of the intensity of their situation. Preparation and education can easily save lives.

Case in point: there was a terrible incident this past February near Wolf Creek Pass in southern Colorado. Four snowmobilers were out riding when they triggered a slide. One rider was partially buried while a second was completely buried. Unfortunately, the three surviving snowmobilers were unprepared: they didn’t have a single shovel in the group. As a result, they had to leave the scene of the avalanche and ride until they had cell service to call 911. By the time they returned to their buried friend, he had long since expired.

Every single backcountry skier has a different level of acceptance for what they consider “safe conditions.” Will and I make a great pair because neither of us is willing to push it for a ski run; we are both content skiing low-angle, super safe terrain if it means there is next-to-no danger of triggering slides. We have other friends that are willing to push the limits to snag a burly couloir. Again, it all comes down to identifying what you are comfortable with and standing your ground. Snow science and education will make it easier for you to make your own decisions. 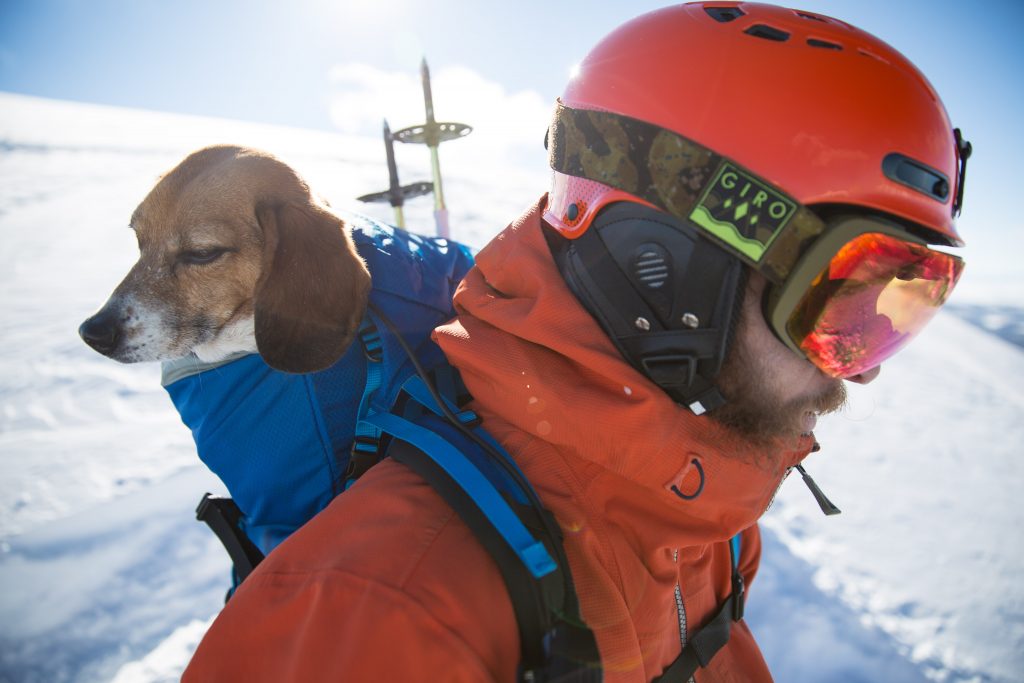 All this is not to tell you to stay out of the backcountry. Backcountry skiing is a beautiful and fun way to explore the mountains while enjoying time with friends. Simply educate yourself and understand the snow and you are sure to have more memorable moments than you will ever remember from an inbounds ski resort!

Backcountry Skiing for Beginners: The Gear