The Best Powder Day of My Life: Crested Butte 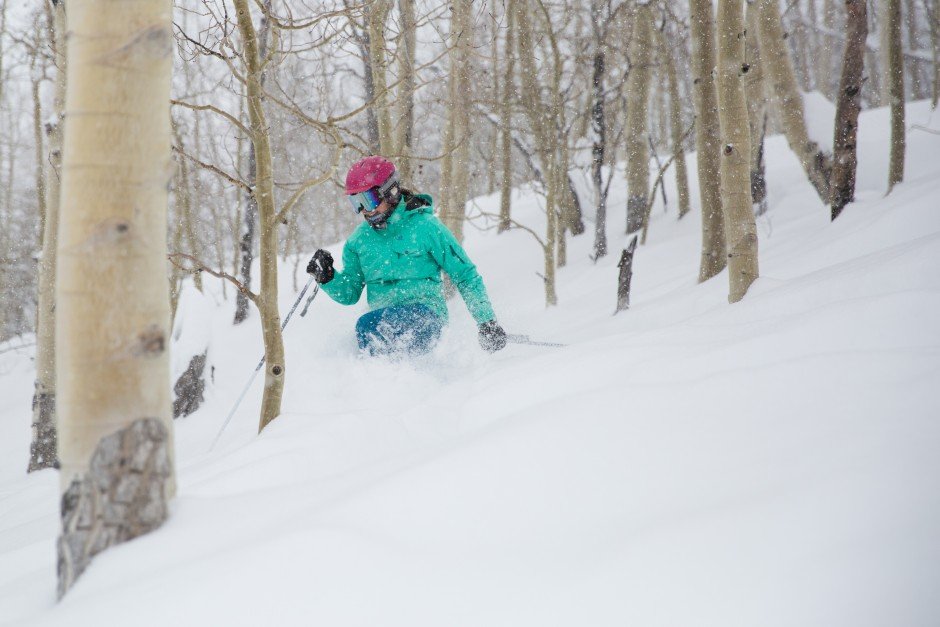 I’ve been a skier for a long time. When I was four years old, my mom plopped me in ski lessons so I could practice my pizza turns while she skied the mountain for some solo mom time. {#ProductiveBabysitting}. And I’ve skied some amazing powder over the past 30-ish years of shredding.

But never, never in my life have I skied as much snow as we found on our first road trip stop in Crested Butte! 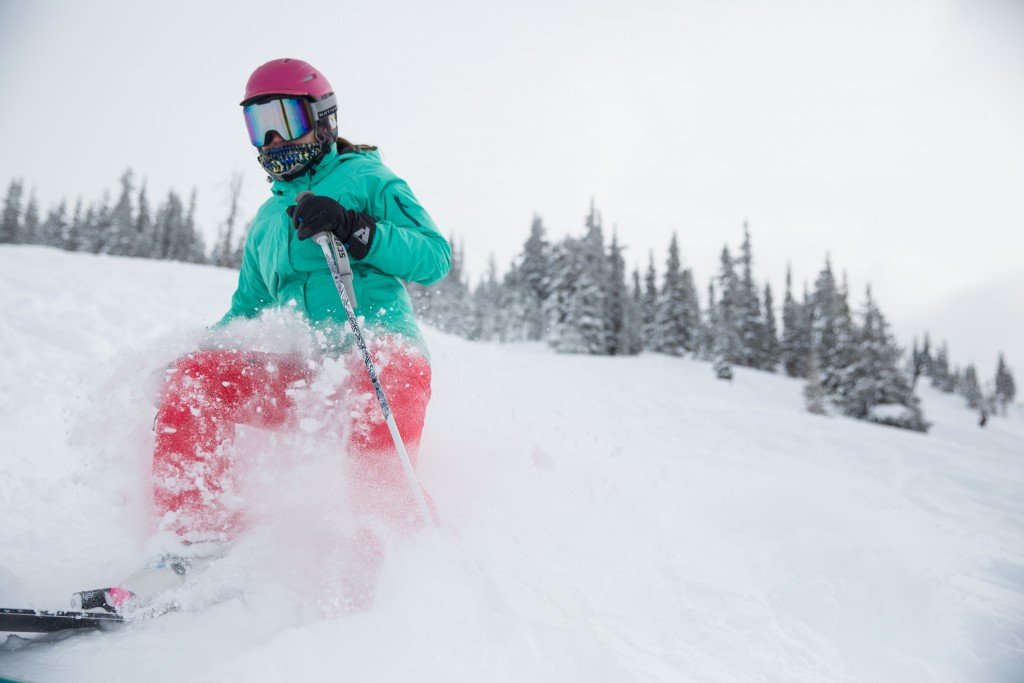 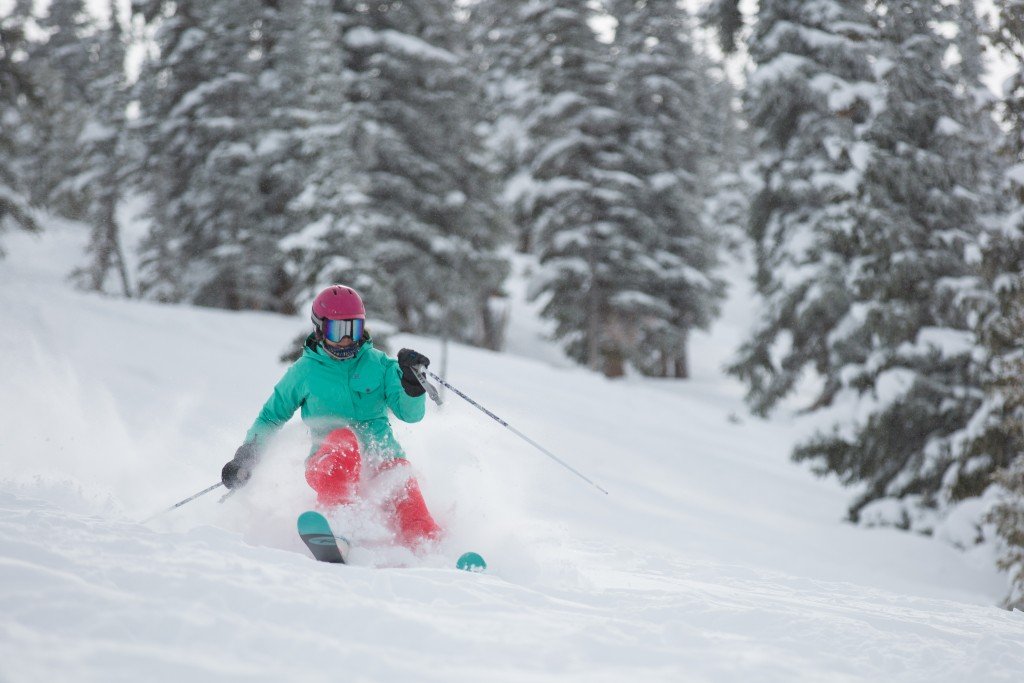 Will knows that CB holds a special place in my heart so he scheduled the snowy mountain village as our first stop of the trip. And as we pointed our trusty Outback towards the Gunnison Valley, we realized that he couldn’t have asked for better luck: Crested Butte was in for the storm of a lifetime, and I don’t say that lightly. In three days, the mountain received 30 inches of snow, and we arrived just in time to enjoy the fresh stuff!

We spent Monday afternoon exploring the mountain and slashing into any meadow of powder we could find. Skiing in true powder feels like floating, but this was on another level. There was so much snow that I could barely believe it. Black diamond runs turned into double blacks as we sought steeper and steeper terrain. Why? There was so much snow that you needed a steep mountain to even move! {Trust me, you didn’t want to get stuck in hip-deep snow!} 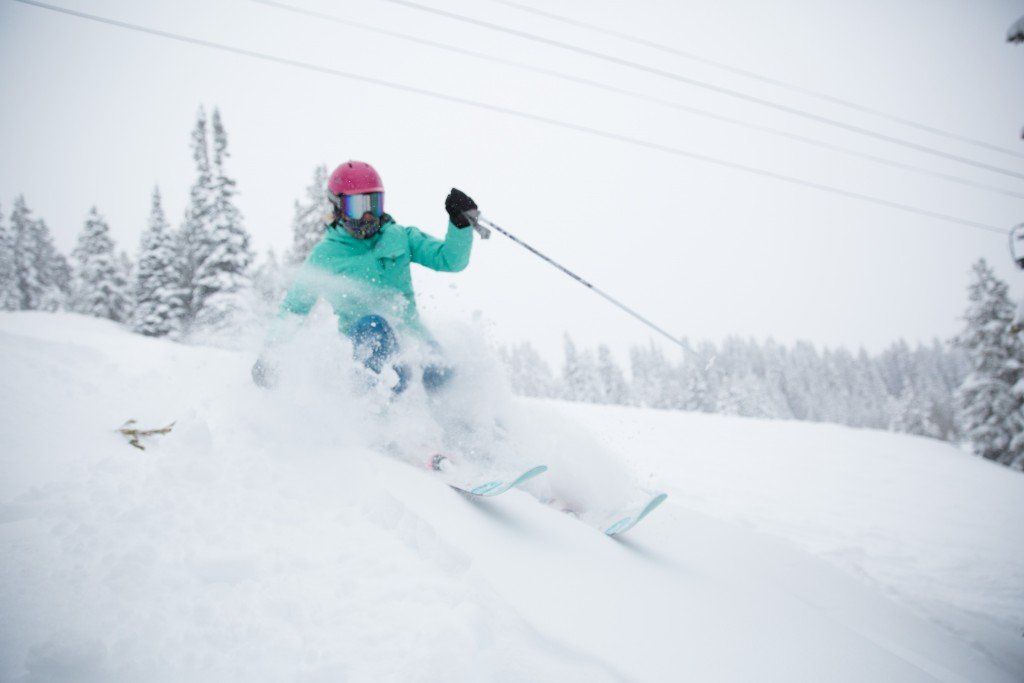 Will hates this snap because it ended up blurry, but I like it because it makes me look like I know what I’m doing!

My quads burned from the effort and my cheeks stung from the bitter cold, but we retired to the Old Town Inn {compliments of the tourism board} with happy hearts. After inhaling a dozen of the chocolate chip cookies in the lobby, we crashed for the evening. Maybe we are old or maybe the snow exhausted us, but we wanted to get a good night’s sleep before Tuesday’s full day of powder!

The snow petered out over Monday evening, leaving a mountain of fresh snow with minimal people. Crested Butte is rarely crowded to begin with, but on a Tuesday? Most of the locals had exhausted their “miss-work-to-go-skiing” days so we had the place to ourselves!

We exploded through tree glades with snow flying into my face and drenching my hair. Will tried to grab a shot of me and laughed as I nearly dropped out of the frame; he hadn’t been prepared for that much snow! 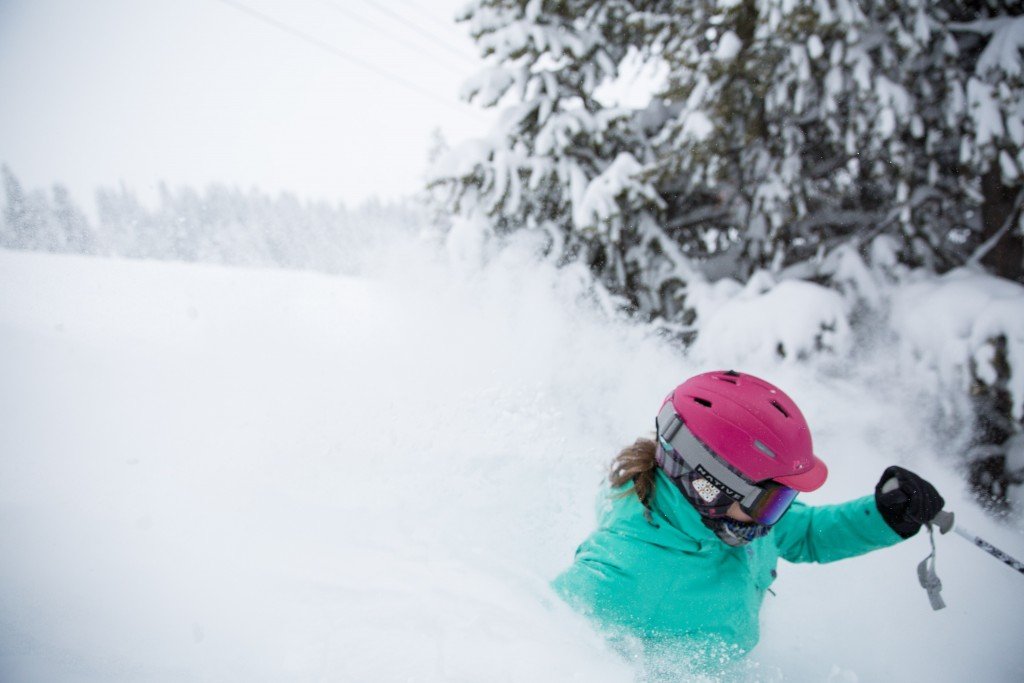 Dropped right out of the frame!

After playing for a few hours, we were ready to try some tougher areas. Mt. Crested Butte is known for its “extreme skiing” in the higher reaches of the mountain, but I’d never skied there. In the past, those areas have always been closed or super icy when we visit, and I’m not about rag dolling my way down the hillside! But with 30 inches of fresh snow, we figured anything was fair game. Due to avy blasting, the majority of the “extremes” were closed, but Headwall was open. We caught The High Lift up and checked out the view. 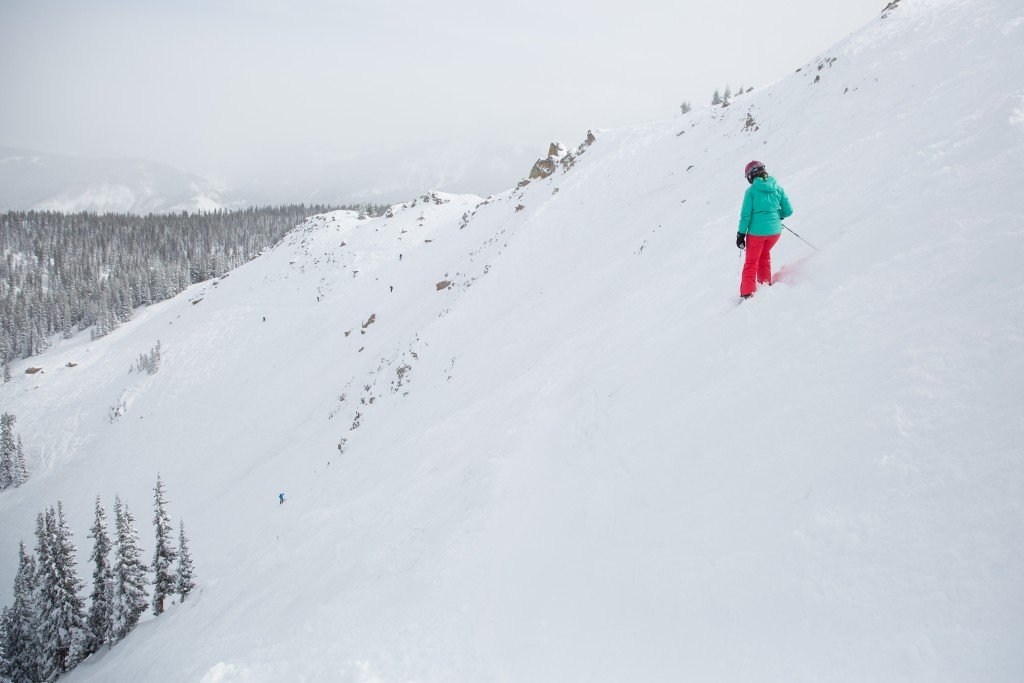 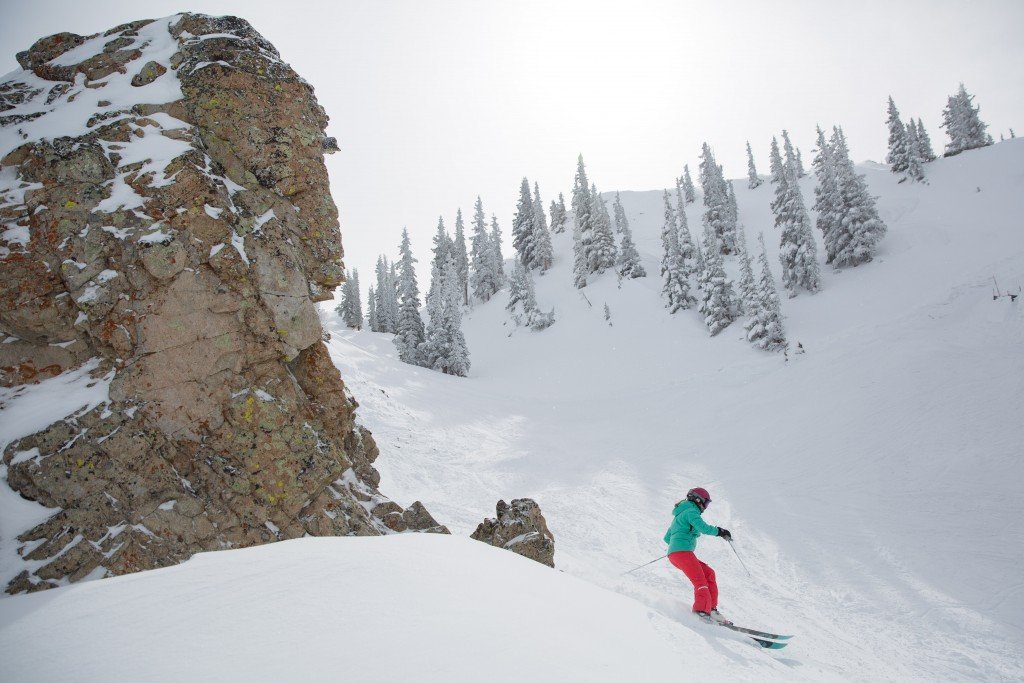 Crested Butte’s extreme skiing is no joke, and I don’t say that in a condescending manner. It’s very rocky with lots of pillow drops and tight trees at a slope of ~45 degrees. If you plan on heading up there, please be sure to stay in control and understand your abilities. It would be very easy to turn a good day into a no-good-very-bad-day in a minute! 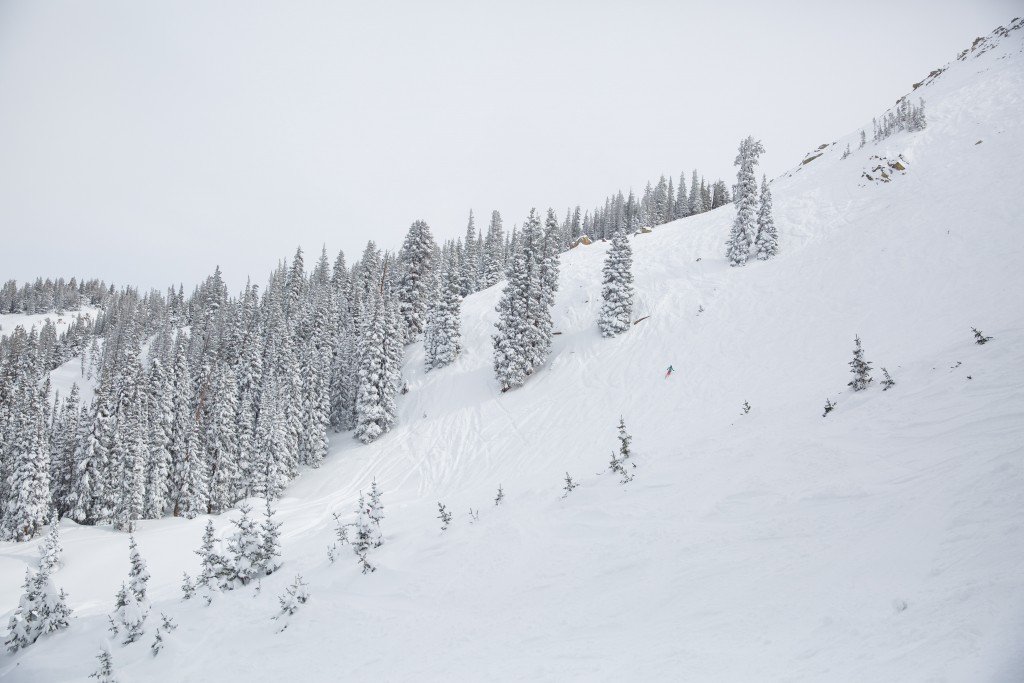 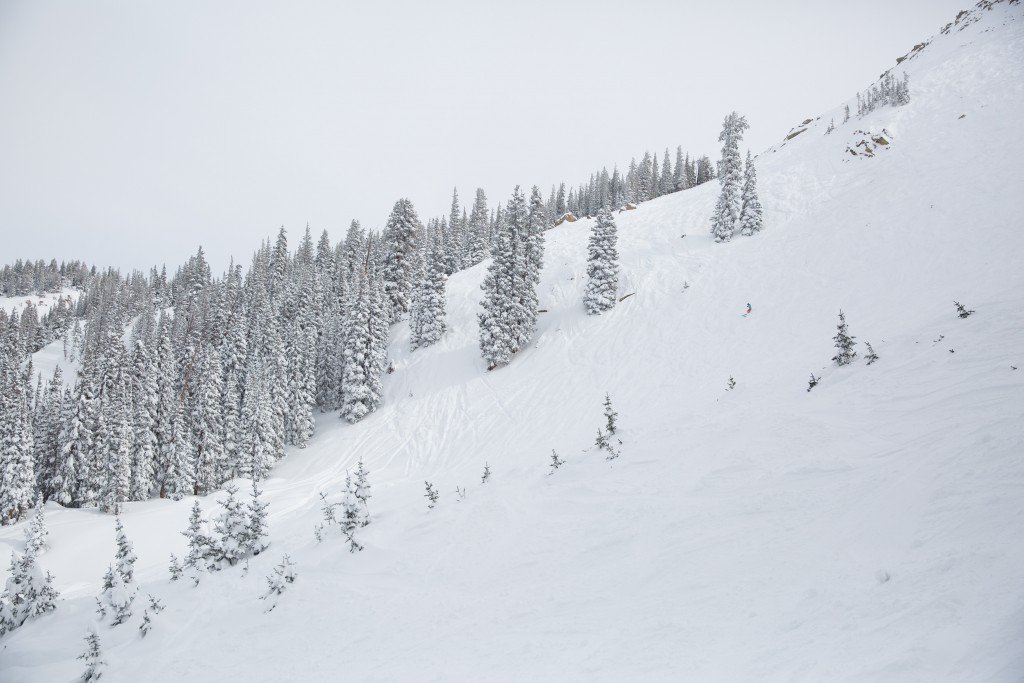 Can you spot me?

After completing the traverse into the Headwall zone, I turned around to realize that I lost Will. He had taken a turn somewhere and accidentally dropped into the trees around the Big Chute area. I didn’t know this at the time, so I spent a solid five minutes panicking that he had wrecked himself on the mountain. Once I realized he was likely waiting at the bottom. I found a good line and dropped in. Yowza! The steeps at CB are no joke! Hands down, this was the steepest I’ve skied in years and the rocks scattered around the mountain face kept me on my toes. Thankfully, the fresh snow covered the wicked terrain and I was able to keep my jump-turns at a minimum.

Y’all, this was the best day of skiing that I’ve ever experienced in my life! We talked with some locals and we all agreed that none of us could remember skiing this much snow ever; and that’s saying a lot. It was a magnificent kickoff to our month of travels!