I pulled the #1 blogger fail this weekend and didn’t bring my camera to the event on Saturday….so I’m apologizing ahead of time for the lack of photos. Sorry y’all!

Big Horn puts together two in-house competitions each year: the Big Horn WOD Bash in December and this Bring-A-Friend competition in May. In essence, ten teams are allowed to compete with each team consisting of one BH member and one non-member. Teams can be all female, all male, or coed, so naturally, I decided to drag Will along as my partner. 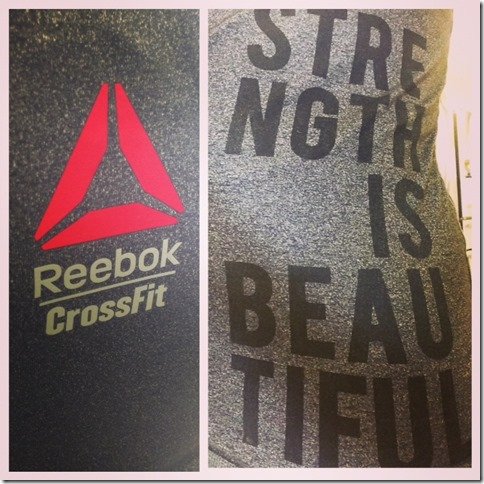 Wore my “Strength is Beautiful” Reebok tank to the comp

Because half of the competitors aren’t current CrossFitters, I knew the WODs wouldn’t be based on actual weights and Olympic moves. Instead, I was planning on lots of body weight movements combined with major running. Turns out, I was half right! The first WOD was the most cardio-driven of the group, and if I had to choose, I would say that it was the toughest for me. 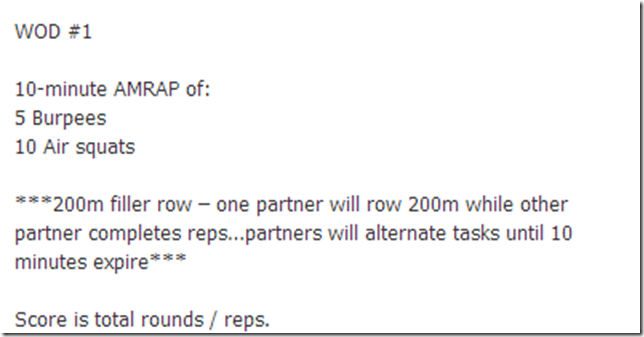 Will and I were in the third heat of the day, so we got a chance to watch the first two groups go before us. There wasn’t a ton of strategy involved with this one other than don’t die, so I like to think we accomplished our goal! I do remember laughing my face off while rowing because I heard Will getting “no repped” by the judge behind me. In short, an air squat rep won’t count if your butt isn’t at least parallel with your knees. It’s super frustrating and annoying to get no repped (although very necessary to ensure consistency among all affiliates) because you put the energy into the movement without gaining the reward. 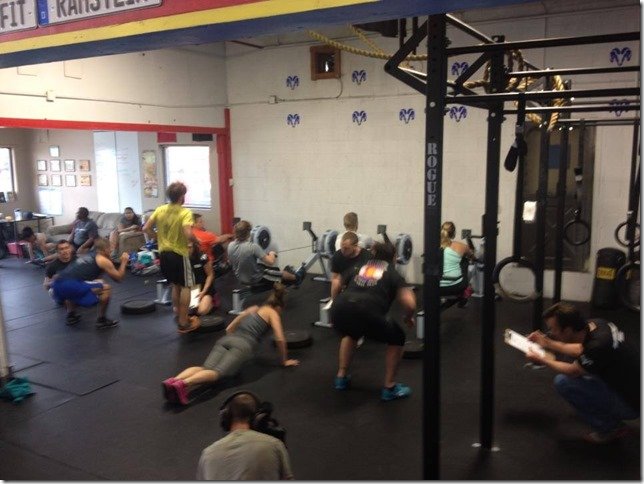 Our heat during WOD #1. That’s me with the pink Nanos, mid-burpee. Will is on the rower in front of me

Will does dozens of these all the time, so I have no idea what he was doing back there, but he definitely experienced a string of no reps. Am I a bad girlfriend because I found it funny?!  In the end, we knocked out 16 + 2 rounds, but I’m sure we could’ve at least hit 17 if it wasn’t for the no reps. Sigh. Next time! 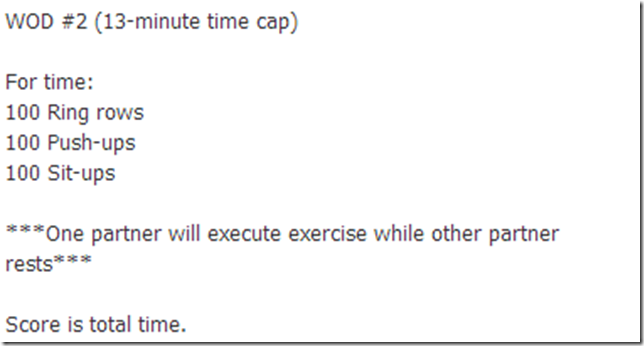 Of the three WODs, the second one was the easiest for me if only because Will took on a lot of it! The numbers above had to be completed by both teammates, in whatever fashion they chose was the most efficient. Will hopped on the ring rows first and was able to punch them out in sets of 25, so I think I only did 40-ish myself. The same thing happened with the push-ups, which made me quite the happy camper because those things are still my nemesis! I think we evenly split the sit-ups between the two of us, so at least I was able to carry my weight on that exercise. I don’t exactly remember our time, but I think we finished WOD #2 in 7:19 (or 7:29? 7:39? I feel that there was a 9 in there somewhere!) 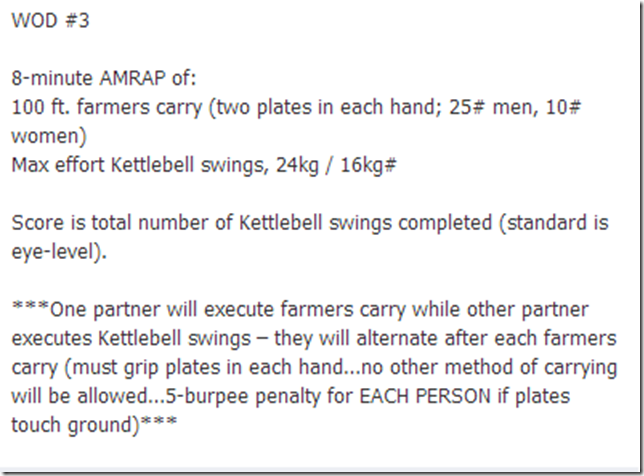 The last WOD was the most concerning for me just because I was worried about Will’s back. He had practiced a few kettlebell swings prior to the start of the comp, and his back had been acting all wonky. (The man has broken/torn/disturbed almost every body part, but that’s a story for another day). He insisted that he was only in pain because he needed to warm up, so I gave him a good 30 minutes to complete a solid set of running and calisthenics. After running 2.5 miles and doing lots of stretches, he claimed his back felt great, but I was still worried. In order to combat this during WOD #3, I decided to complete my farmer’s carries as fast as I could so that he would have less time to complete kb swings. It meant that he wouldn’t be able to do as many, but I was okay with it. Survival first!

Luckily, the female weight for the farmer’s carries (two 10# plates) was pretty light for me, so I was able to get down and back easily. I tried to hit 15 kb swings during every one of Will’s farmer’s carries, but the weight started to get a bit heavy for me in the end. However, I was happy with our final score of 200, and even more happy that we both came out of the day intact! 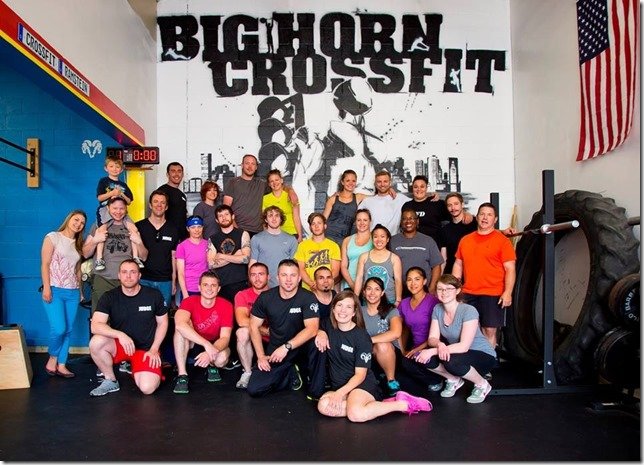 The Big Horn crew at the end of the comp

We didn’t place in the top three, and in all honesty, I have no idea where we did place! I would guess somewhere between fourth and seventh place….how’s that for a general description?! However, we had a blast and the day was totally fun. One of my favorite aspects of Big Horn is the family vibe at the gym. I know people say that frequently, but I truly enjoy all of the people that workout at Big Horn. In fact, Will has only been there a handful of times and he even digs the atmosphere. It’s a fun place to be, and that was no exception on Saturday!

Have you ever participated in a CrossFit competition? Would you ever?

Running with the Boys

Backpacking in the Rawah Wilderness