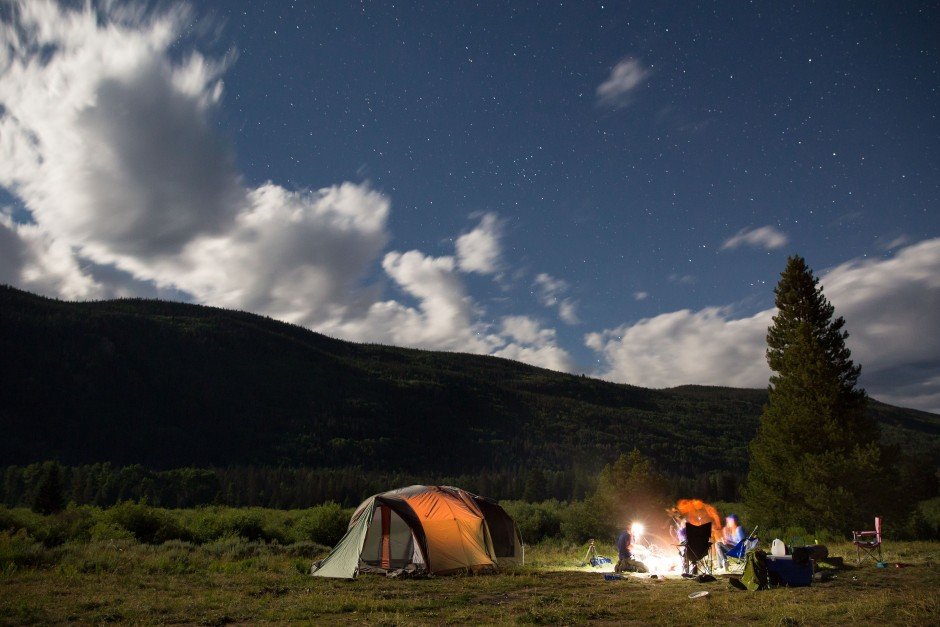 Colorado camping is my favorite. Period.

But it can be tough to remember that *fun* is okay too. With magazines touting the newest ultralight tents and sleeping bags shrinking to the size of a small fruit, it can be hard to remember that the sport is simply about enjoying the outdoors.

And truthfully, I forget sometimes too. Will and I have been pushing the ultralight because my messed up back isn’t loving heavy packs the older I get. It just doesn’t recover as well as it used to! {And yes, I say that as a whopping 33 year old….!} And while I will never discount the peace and serenity you can find in the middle of the backcountry, there is something very appealing about Colorado camping. 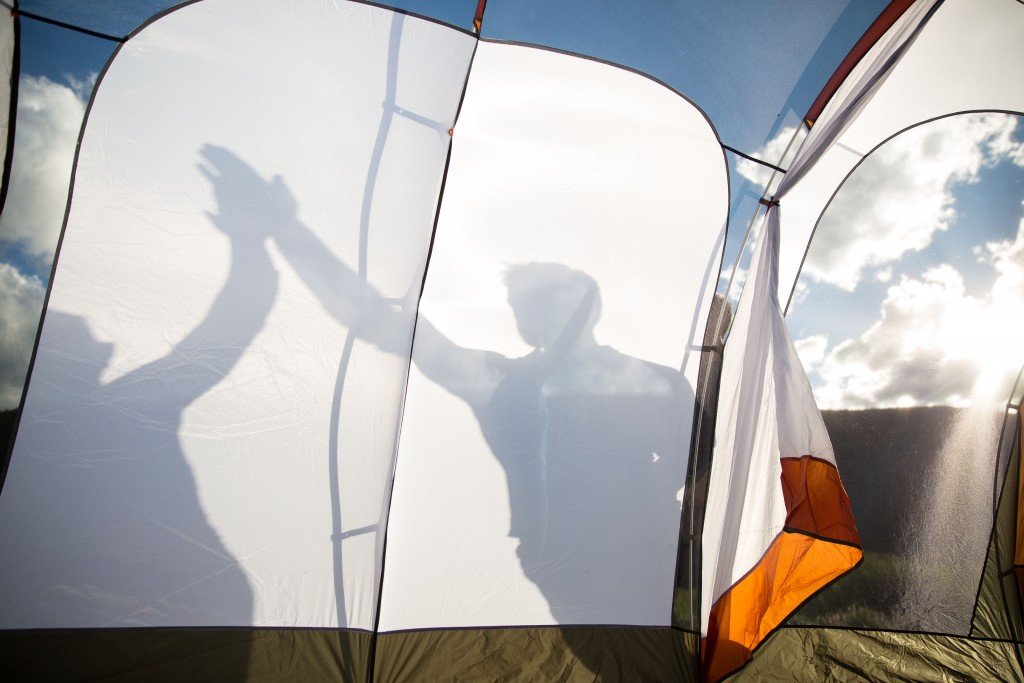 All Photos By Caveman Collective

Spacious tents with such high ceilings that I can stand up while changing.

Even having a campfire in general! 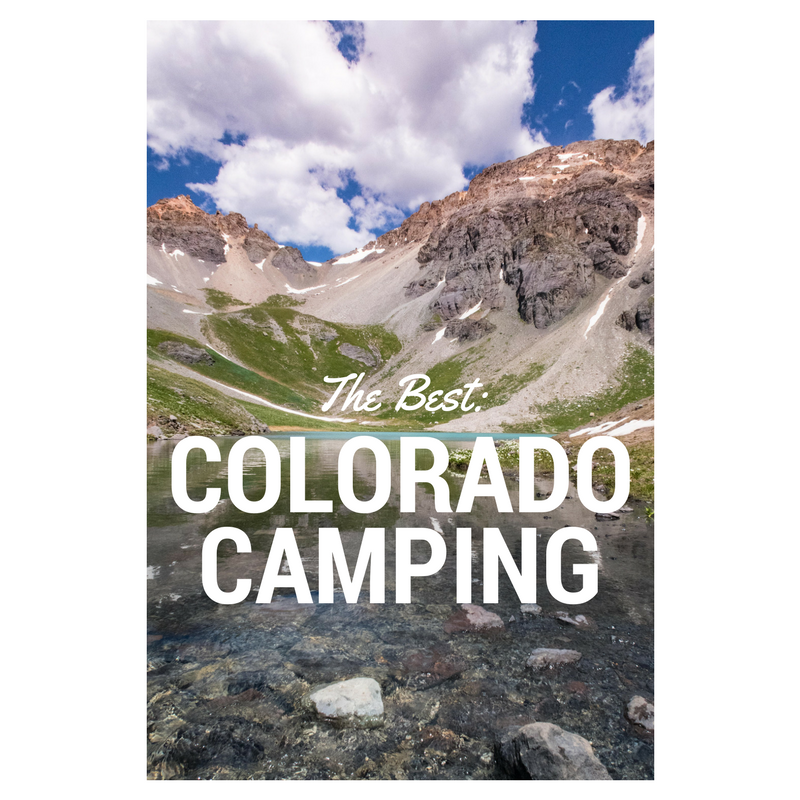 But, all of that aside, the best part about camping is friends. Will and I recently put together a mellow car camping weekend in Northern Colorado, inviting a crew of people that we don’t usually see. We didn’t know where we were going other than “somewhere near Cameron Pass.” We simply loaded up our cars, pointed them north, and began driving. 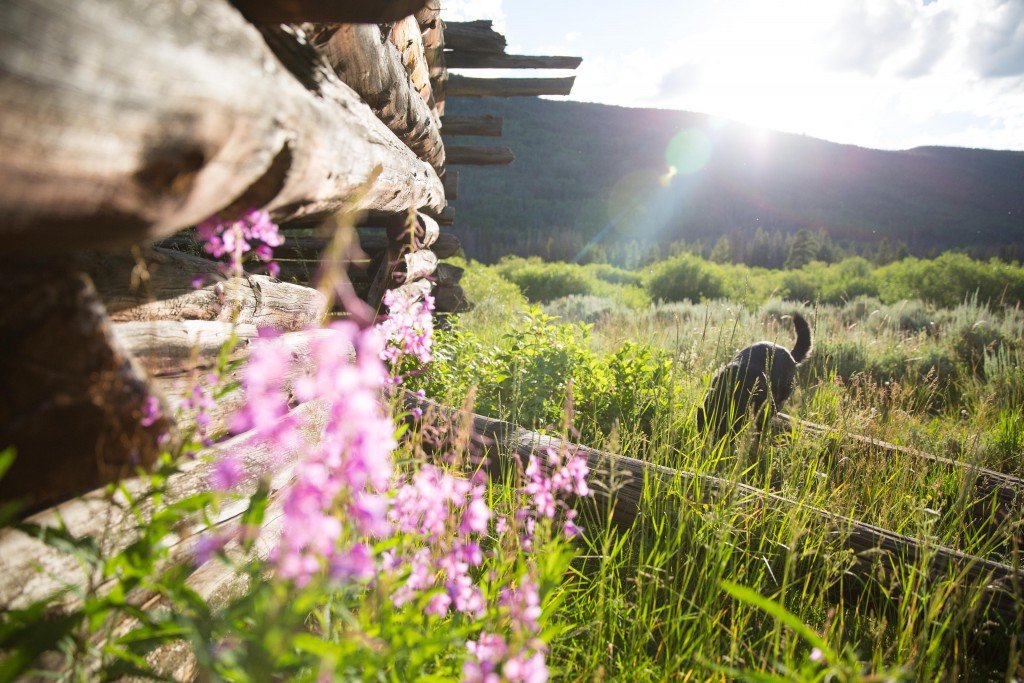 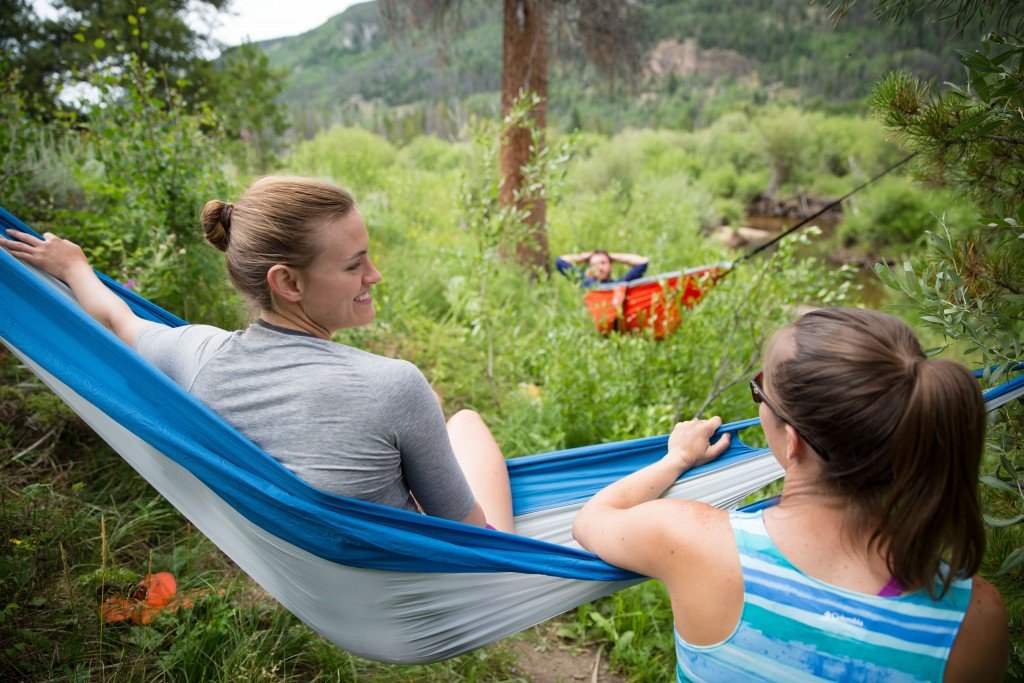 Sure, we spent an extra hour in the car trying to find the perfect spot, but those extra minutes were well worth it. We found a large, flat plot of land, located next to an old dilapidated cabin. Wildflowers bloomed against the eroding structure. While pretty, the ol’ building wasn’t even the best part:

We had our own swimming hole! 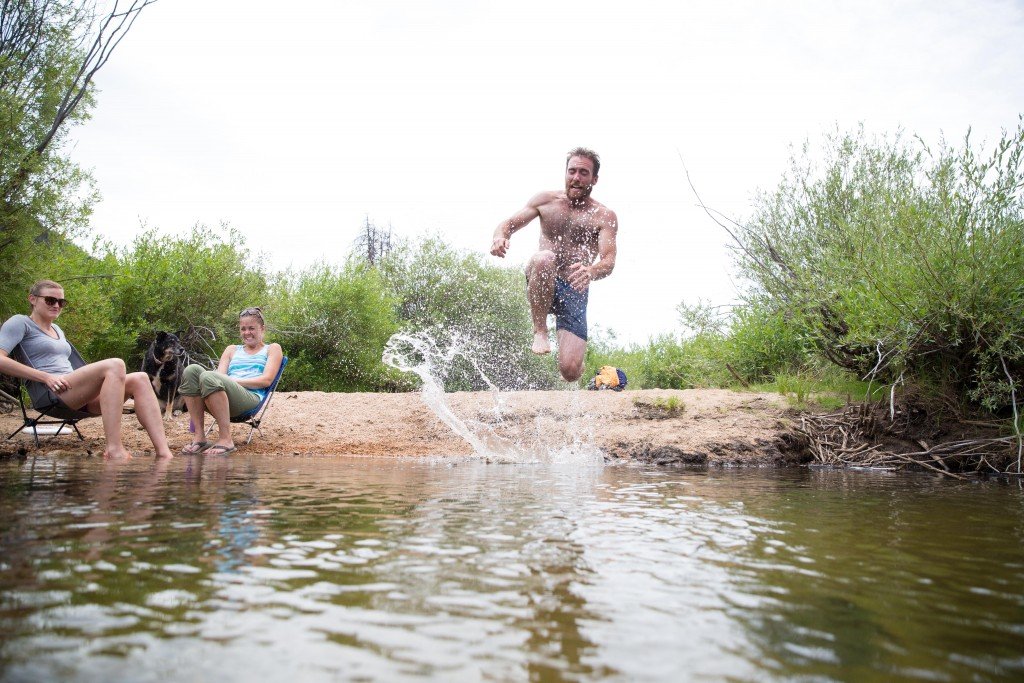 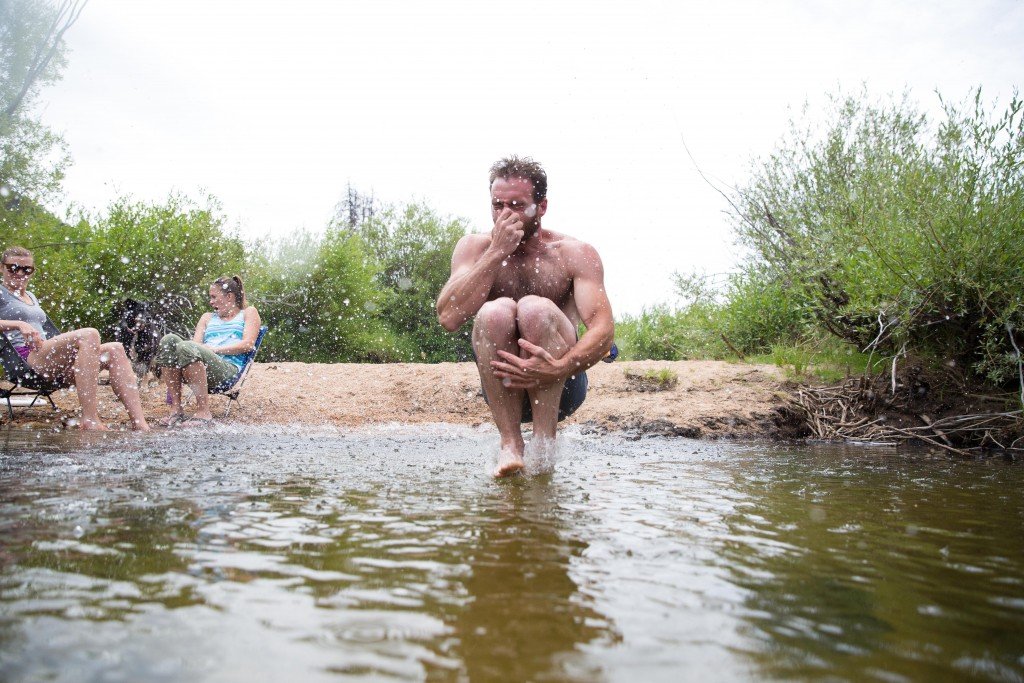 And y’all? It was perfect. Tals specifically enjoyed our swimming hole, using it as an escape from the weekend’s ridiculously hot sunshine. The sandy beach led into the water, abruptly dropping off after six or seven inches. Poor Tals didn’t see the drop off and frolicked into the river excitedly, only to run into the deep end, completely submerging her head under the water! She popped to the surface a second later, eyes wide and confused as she awkwardly paddled her way to shore. She had been expecting a cooldown on her tummy, not a full-blown ice bath! 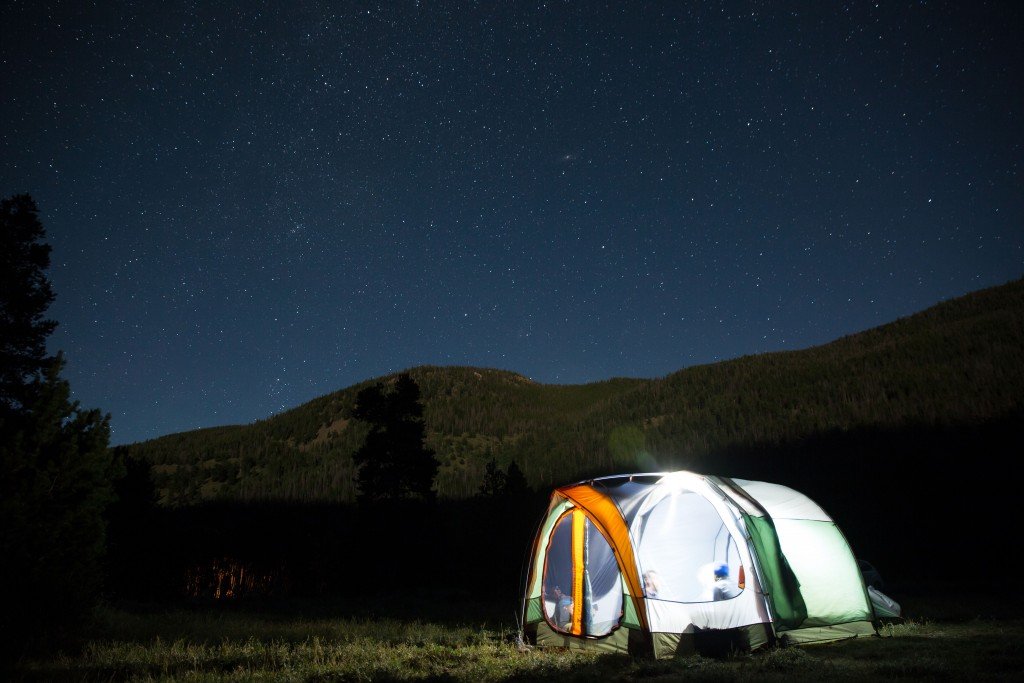 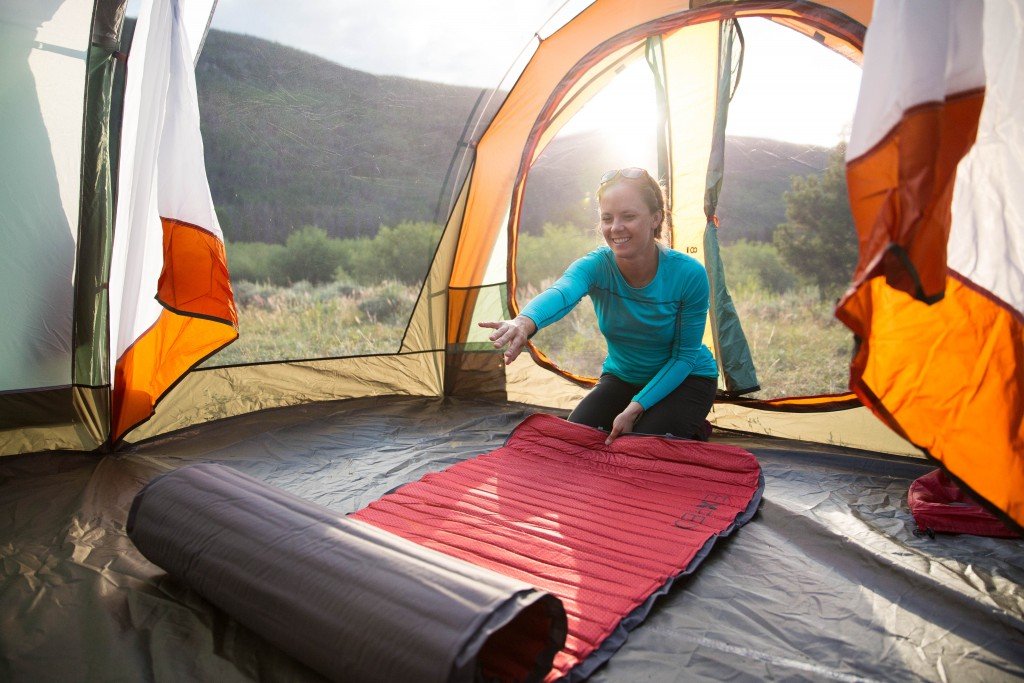 As well as this Exped MegaMat. This sleeping pad is extra deluxe and cushioned; perfect when weight doesn’t matter! 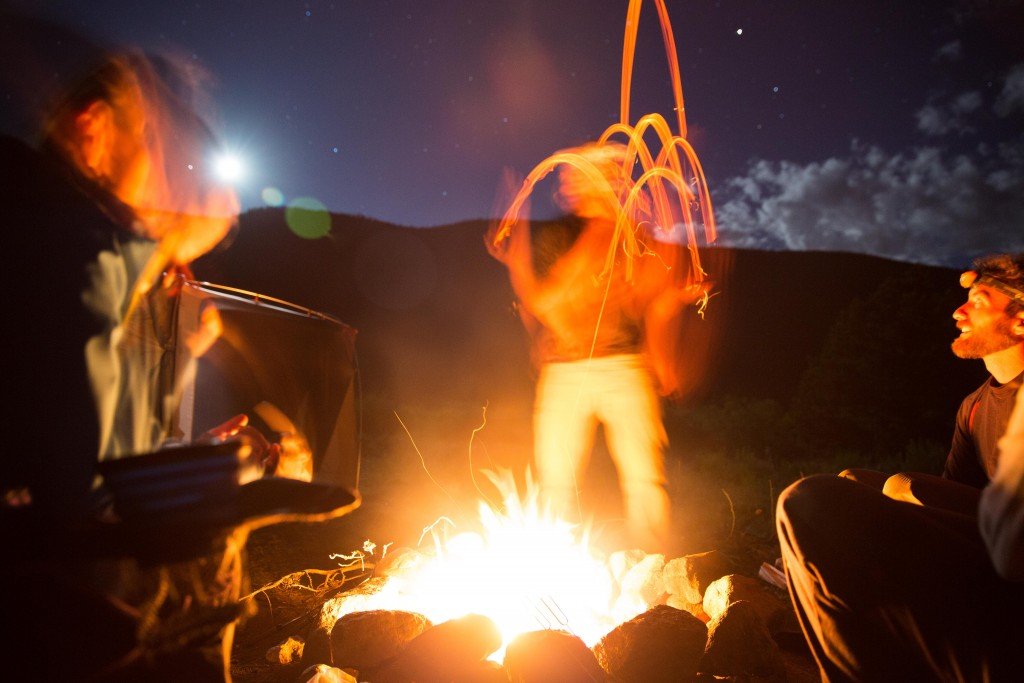 We pitched two gigantic tents, allowing for plenty of space for our small group of five. I brought Tally’s sleeping bag {an old Marmot from the early 2000s} and a foam cell pad, making her a private doggy bed in the corner of our massive tent. We set up camp chairs and drank Chai whiskey from flasks. We even hung two hammocks from trees, facing the small stream behind our site. We splashed in the water, we lounged on our personal sandy beach, and we enjoyed each other’s company. 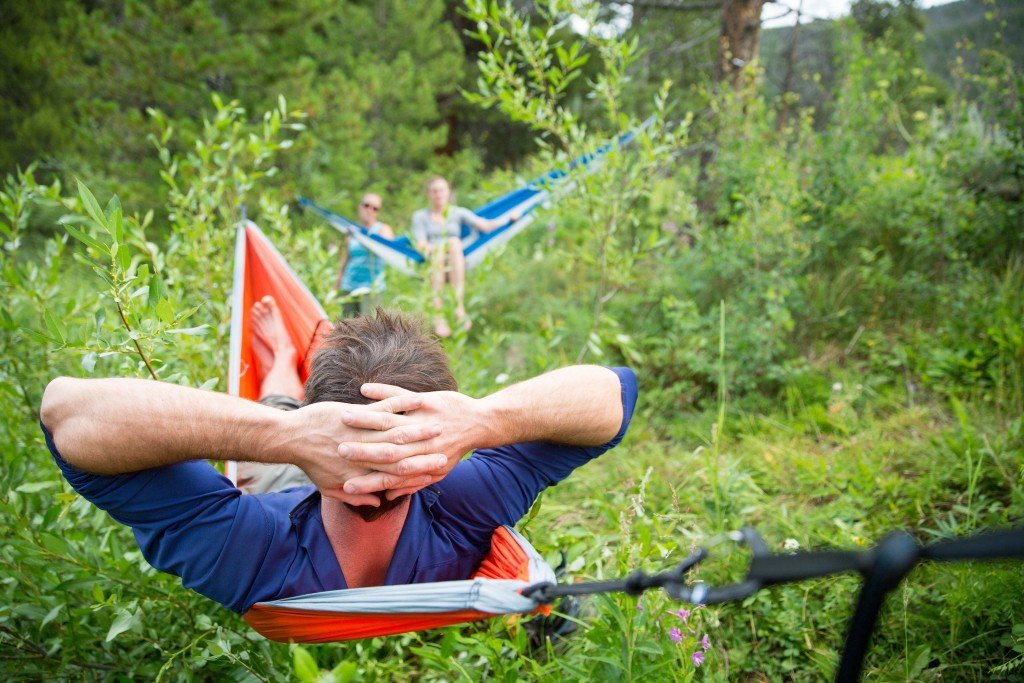 After Colorado camping weekends like that, it’s hard to return to backpacking!

Man vs. Animal: The Yellowstone Bear