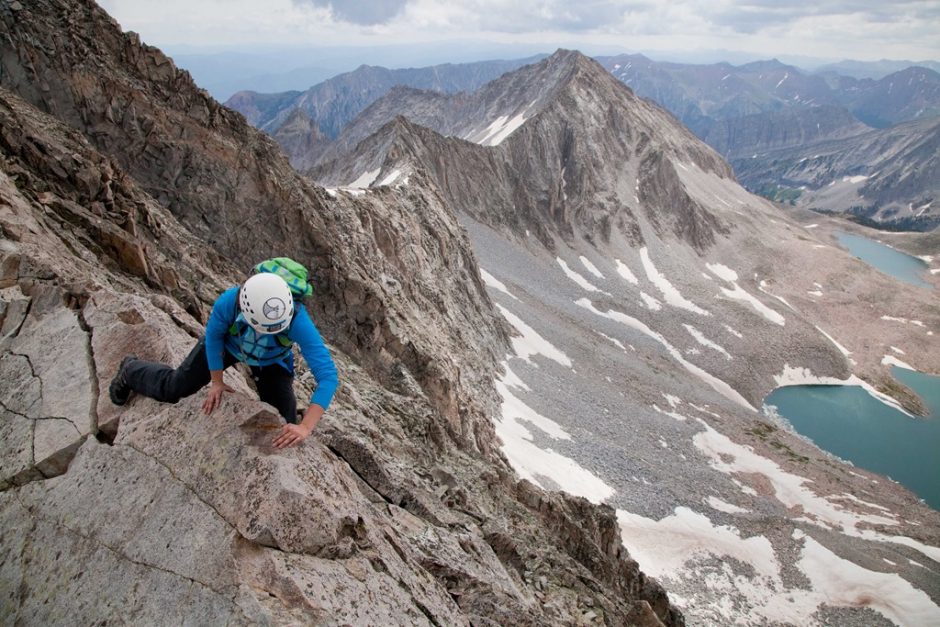 Saturday morning dawned bright and early. We were ready to tackle Capitol Peak!

I’m typically not one for disclaimers on blog posts, but I’ve gotten quite a few emails and tweets regarding our Capitol Peak trip. Yes, a climber died last week on the same peak we tackled over the Fourth of July weekend. Mountaineering is inherently dangerous, no matter the precautions, so please be careful if you decide to head out there! 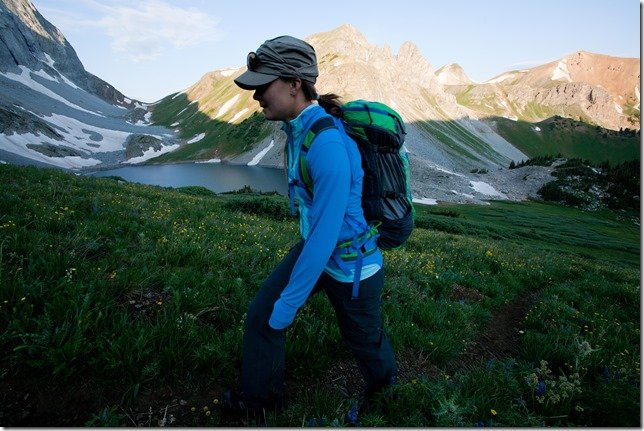 **If you missed reading parts one and two, check ‘em out here or here**

We finally got moving around 6:00 and almost immediately began the steep climb up to the saddle between Capitol Peak and Mt. Daly. Most of our day’s route would take place on the back side of the ridge, so we actually couldn’t see where we were going until we crested the saddle. However, this stretch of trail was a tough way to get started so early in the morning: the switchbacks covered 900 feet of elevation gain in just under one mile! 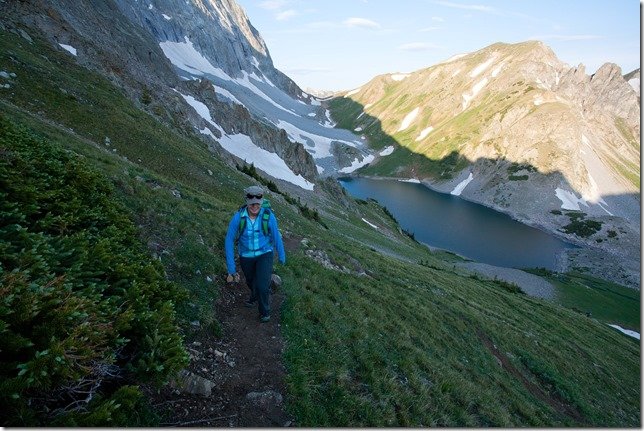 We crested the saddle just as the warm sunshine hit the ridgeline and took in the spectacular view in front of us.

Will and I also decided now was the time to stop and put on our climbing helmets. The remainder of the day would be spent on loose, rocky slopes or snowfields where falling debris is quite common. Since both of us would like our skulls to remain intact, we slapped those suckers on our head and left them there for the rest of the day. 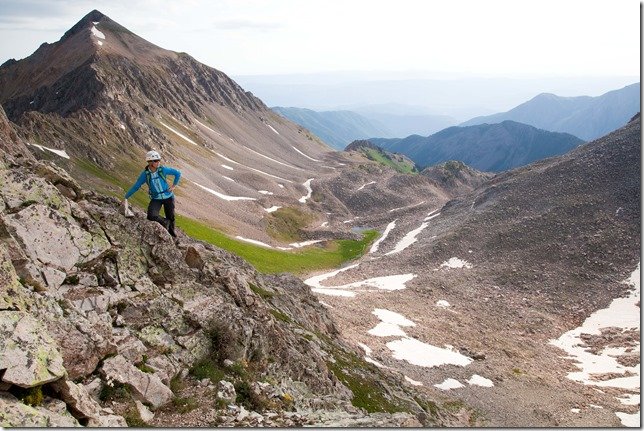 Right off the bat, we made an error in route finding that would haunt us for the rest of the morning. We began to traverse across the ridge but got hung up for a brief moment where the trail seemed to disappear. We pondered our options for a few minutes, but chose the path we had seen a climbing team take in front of us. This trail meant we would continue with class III-IV climbing for most of the morning, which was slow but lots of fun.

However, after 15-20 minutes, our route petered out and we were stuck with some very sketchy and exposed moves. If we had ropes or harnesses, it would’ve been a different situation, but we didn’t. We debated our options and realized we would have to backtrack back to the beginning and find an alternate route. This was easy enough to accomplish, but it meant that we lost at least an hour of valuable climbing time. With storms that roll in before lunch, we didn’t have a surplus of bonus time, so we both knew that our error in judgment would likely cost us the summit later in the morning (foreshadowing!) 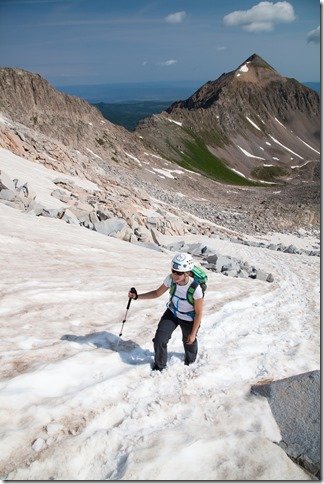 After down climbing the entire rock face, we ended up in the valley on the back side of the ridge. A half dozen snowfields littered the ground, so we set about the somewhat tedious task of crossing the slippery slopes.

The warm morning sun had slightly melted the snow so it was slick, and without crampons, we both had to be extra careful with our steps. Additionally, the beds of snow sat on top of talus fields (large rocks and boulders), so we had to constantly test our foot holds to make sure we wouldn’t fall through and slam our legs on the rocks hiding below. Will fell through one section of snow, garnering a glorious war wound on his shin, complete with the dripping blood to prove it. Since he wasn’t seriously injured, we decided he should flaunt that sucker with pride! 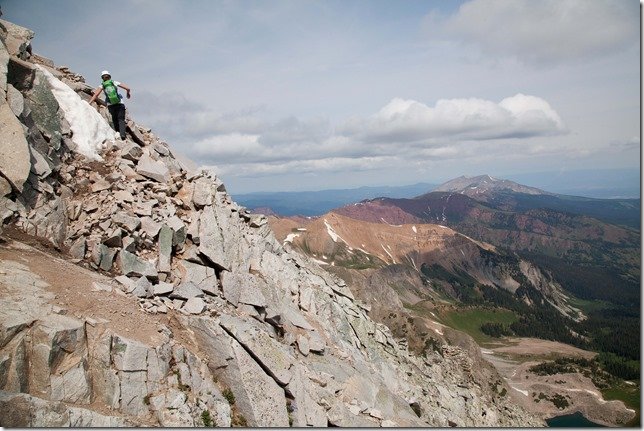 After what seemed like hours, we finally cleared all of the snow fields and made our way out of the valley and back up onto the ridge. I was itching to see the Knife Edge by this point, but first we had to clear K2. Aptly named, K2 is a little bump of rock on the way to summit of Capitol Peak. K2 is known as such because it actually requires some technical climbing skills and some climbers claim that is more difficult than the Knife Edge itself.

Will and I discussed and we both agreed that we wanted to go up and over K2 instead of trying to skirt around it. This was an awesome decision because the few tech moves were a lot of fun and nothing out of our comfort zones. Down climbing the back side to reach the trail was a bit sporting, and I had some difficulty getting down. It was a steep rock face with plenty of grips, but my legs were too short to reach anything! Will ended up climbing down and coming over to spot me, but he was under strict instructions not to help unless it looked like I was going down! 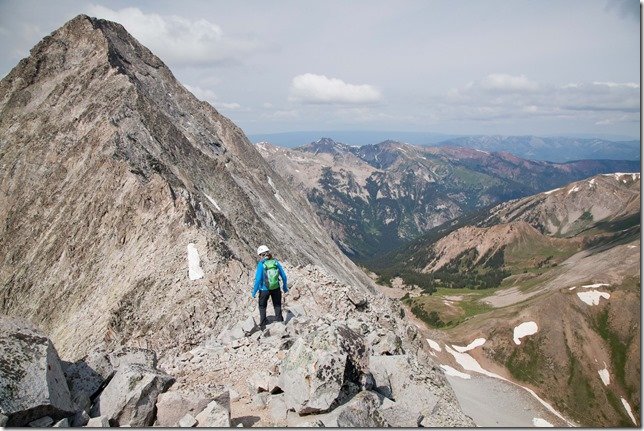 With K2 behind us, we finally laid eyes open the Knife Edge of Capitol Peak! The Knife Edge is a 150 foot jagged rock edge on the way to the summit that scares the living daylights out of climbers.

Both sides of the Edge have a sheer vertical drop with tons of exposure. Many climbers will just grab the top of the ridge and smear their feet below, but even that is a little sketchy: if you miss a hold, you’re looking at a good 2,000 foot drop!

Will was able to cross the ridge using this technique, but I didn’t trust my grip. Instead, I decided to straddle the ridge and scoot across that way. I have zero fear of heights, so I enjoyed being in such a secure position. After all, I could sit smack on the Knife Edge and take in the views! 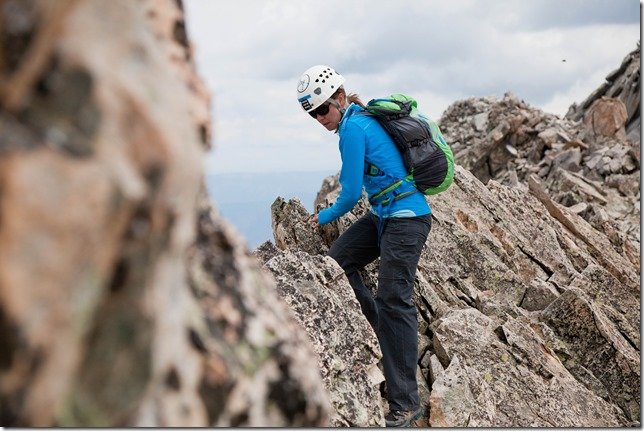 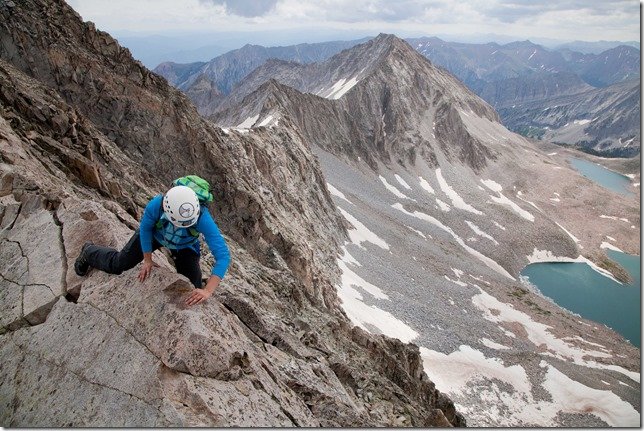 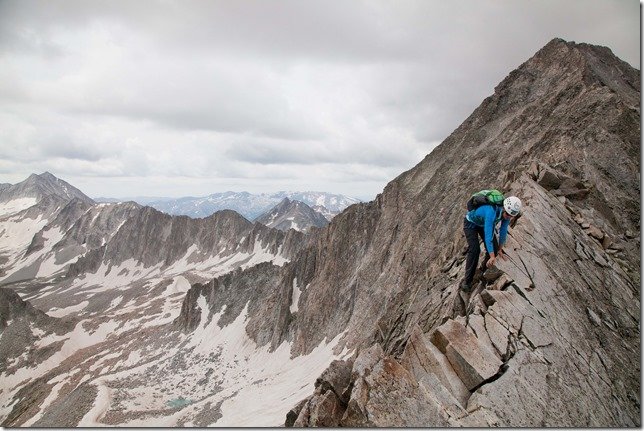 Unfortunately, this was also when I realized that the batteries in both my GoPro *and* Sony Action Cam had died. Seriously, how disappointing! I had lugged both those cameras up Capitol Peak just so I could grab some sweet footage. Alas, the cold night temps had killed the battery juice, so I was stuck with the knowledge that I had packed cameras up a mountain for no good reason. Luckily, I did have my iPhone, so I pulled it out and took this quick video, just to capture what it’s like from up there:

Y’all, I can definitely understand why people freak out crossing the ridge—the exposure is insane!

The rock itself is very solid, but you definitely need to be trusting in the rock and in yourself. Both Will and I were confident and didn’t have any problems crossing the Knife Edge, but not everyone felt the same. We met quite a few climbers that took one look at the ridge, changed their minds, and turned around and hiked back to basecamp. It’s definitely one of those climbing cruxes where you need to decide what is best for yourself. 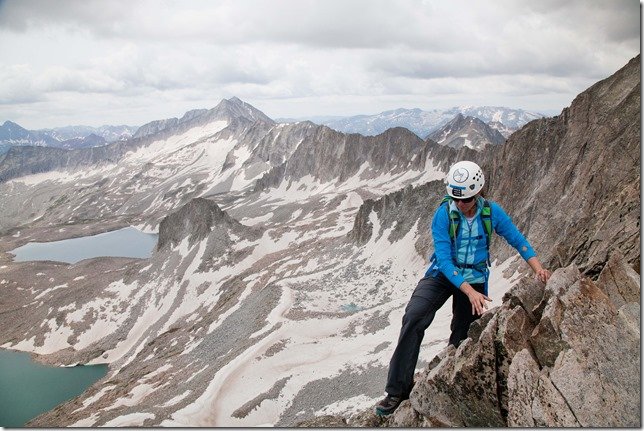 Luckily, Will and I both felt exhilarated on the ridge and loved every second of our crossing! However, we reached the end of the Knife Edge and realized that a massive storm was blowing in towards the summit of Capitol Peak. It hadn’t gotten bad yet, but we could see the black sky developing and the wind gusts were increasing.

We chatted and both agreed that per usual, no mountain is ever worth the risk. There is no quick descent off the Knife Edge, so if you’re up there when a storm blows in, you’re fairly screwed. So, although we were only 45 minutes from the summit, we both agreed without hesitation that it was time to turn around. Granted, I was kicking myself for our route finding error earlier in the morning, but there is no point dwelling on what could have happened, you know? 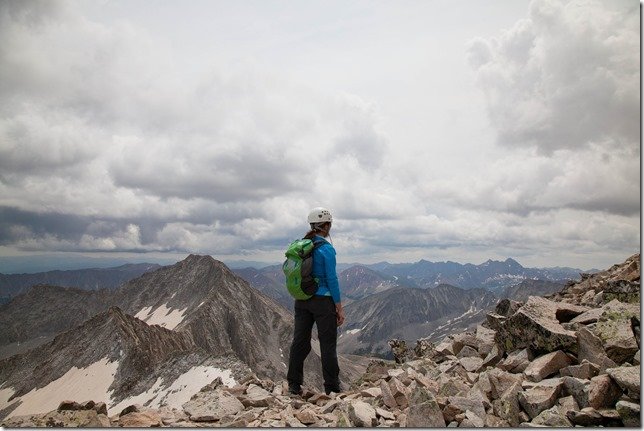 The hike down was relatively uneventful. We crossed the Knife Edge a second time, skirted around the base of K2, and ducked down behind a rock shelter to have a quick lunch before finishing our descent. It wasn’t until we reached the saddle of Mt. Daly that we felt confident in relaxing, knowing that we were only 900 feet away from basecamp and had a shelter to hide in if the rains came. 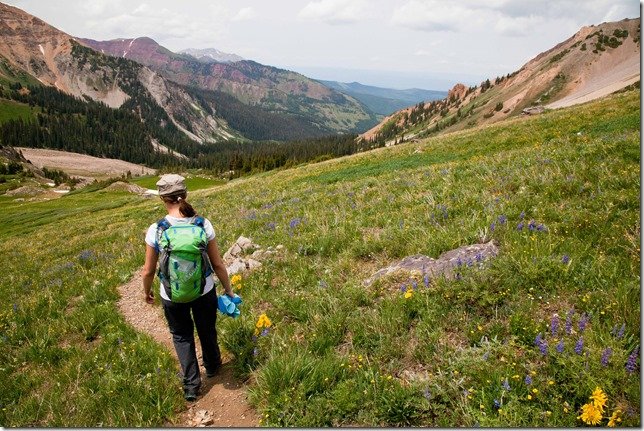 In the end, Capitol Peak was exactly what I was hoping it would be: a physical and mental challenge that pushed me out of my comfort zone but well within the limits of my abilities. Naturally, I’m dying to go back to actually nab the summit, but that day will have to wait. I’m eye balling a couple other adventures in the near future! 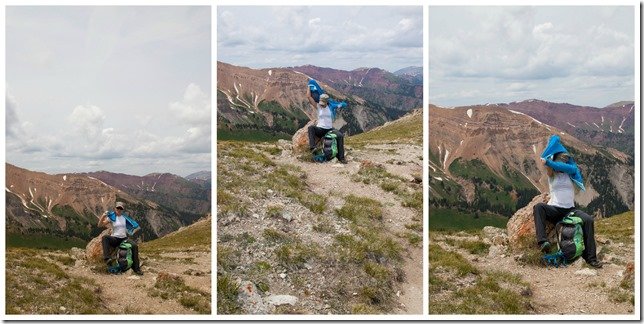 When is the last time you pushed yourself out of your comfort zone?

Welcome to My Shoe Closet