Capitol Peak via the Ditch Trail: Part One

Over the Fourth of July holiday weekend, Will and I decided to tackle Capitol Peak, notorious for being one of the hardest 14ers in the state of Colorado. Not only does it have a very exposed and sketchy ridgeline known as the Knife’s Edge, but it also includes upwards of 17 miles round trip from parking lot to summit and back. Because of this, we chose to spend four days in the Maroon Bells-Snowmass Wilderness Area: one to hike into our basecamp, a summit day, an extra play day, and a final day to hike out. 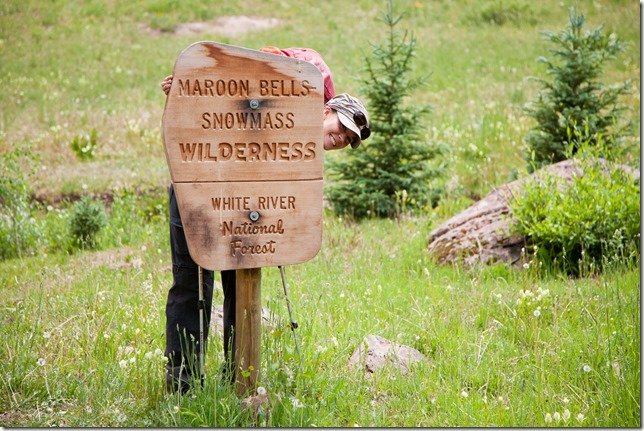 We packed up my Pathfinder on the morning of the Fourth and began the four hour drive to the wilderness outside of Aspen. Sadly, Tals didn’t get to come on this adventure because of the danger on the Knife Edge, so the car ride was fairly uneventful (nothing is quiet with her around!) We followed the instructions given to us by my 14ers.com iPhone app, and they were super easy. We eventually ended up on the 4WD road that easily led us to the parking lot at 9,400 feet. (Side note: you could potentially make it to the parking lot if you didn’t have 4WD but you would definitely need some clearance on your car and a few spots would be sketchy. I’m guessing the road is even worse in early spring!)

Currently, there are two trail options to hike into camp at the base of the peak. Traditionally, the standard route has been the Capitol Creek Trail which immediately drops a good 500 feet from the parking lot and lands you in the valley below. The trail follows the creek as it gradually climbs back out of the valley, but hikers are faced with a deathly steep climb into the parking lot upon their return trip. Because of this, most people have started using what is known as the Ditch Trail, aptly named because it follows a small stream used for watering cattle. The Ditch Trail starts at the west end of the parking lot and avoids the dramatic elevation gain and loss, so most people are all about it….including us! FYI: The Ditch Trail now has a sign labeling it the “Upper Capitol Creek Trail.” Kinda logical, but threw us for a few minutes since we were expecting it to be unmarked! The map identifies this trail as being 4 miles, but I’m highly confident that it is wrong: according to our GPS, it was closer to 6 miles, just like the Capitol Creek Trail. 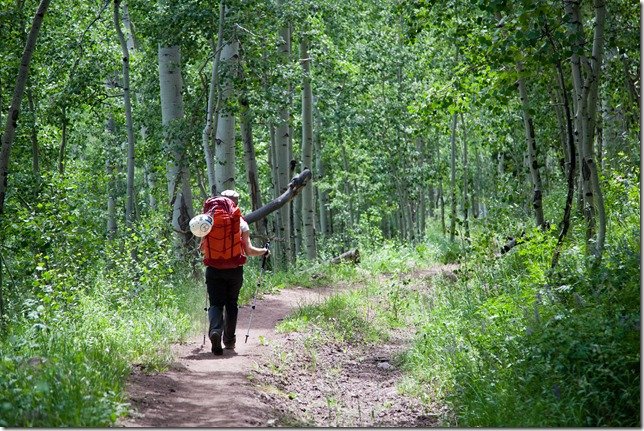 My pack weighed roughly 35-40 pounds and Will’s was significantly more, so we took some deep breaths before strapping the weight onto our backs and heading into the woods around 1pm. I swear, there is nothing like that initial shock when you realize exactly how heavy your backpack is! 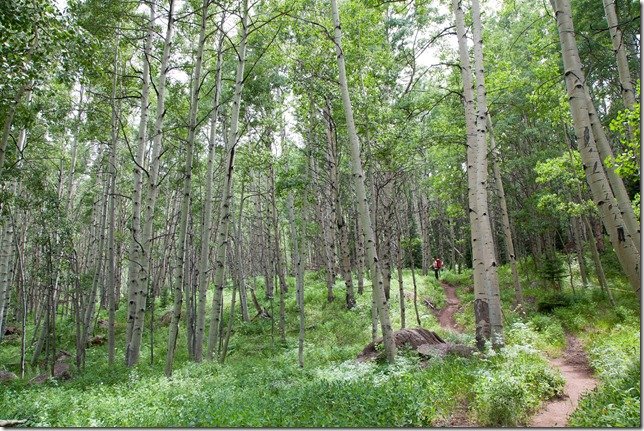 The trail started out very mellow and we took our sweet time strolling through the meadows and enjoying the views. I don’t even want to think about how many times we stopped for photos in the first couple of hours! Everything was so green and lush, and that part of the Rockies was in peak wildflower season so blooms were everywhere! However, we ran into a bit of a snag after a couple hours—our trail just disappeared! As I mentioned, we had been following the Ditch Trail which is supposed to eventually meet back up with the Capitol Creek Trail. Apparently, we had missed the turnoff and followed a random volunteer trail without realizing it…..until our chosen path just faded away in the middle of a field. We spent a good half hour bush whacking it through various meadows and across streams until we finally found our way back to the Capitol Creek Trail. In all honesty, neither of still know where we missed the turn, but at least we were able to find our way back! 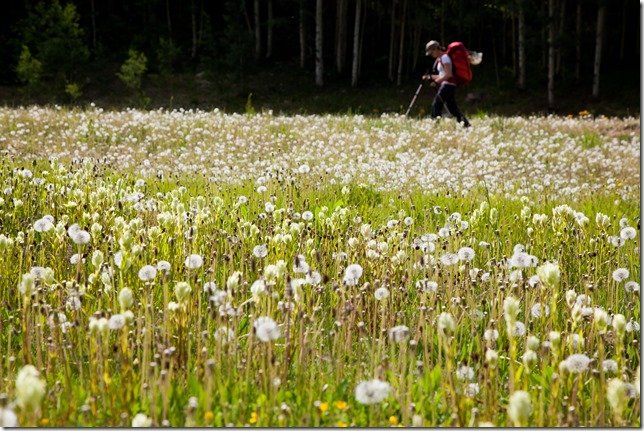 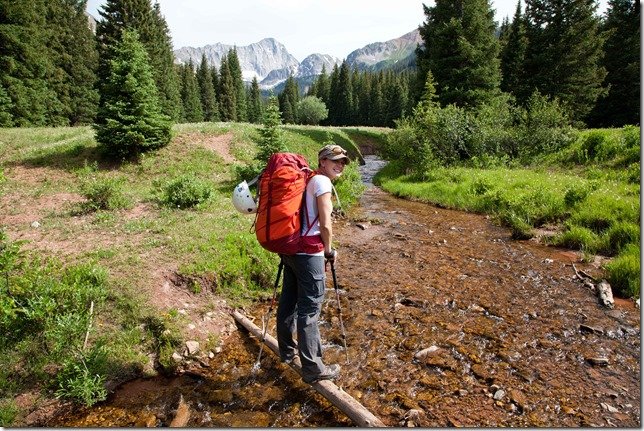 After our little microadventure, we took a look at our map and realized our lackadaisical sauntering had really cost us. It was roughly 5pm and we still had a few miles left. Fortunately, we knew we had an extra day to play with, so neither of us were stressed about it: worst case scenario, we would just camp somewhere along the trail and make our way into basecamp the following day. That’s the beauty of backpacking, right? We both agreed that we would hike to basecamp at Capitol Lake regardless of the time, but it was nice to know that we had an alternate option if we wanted. 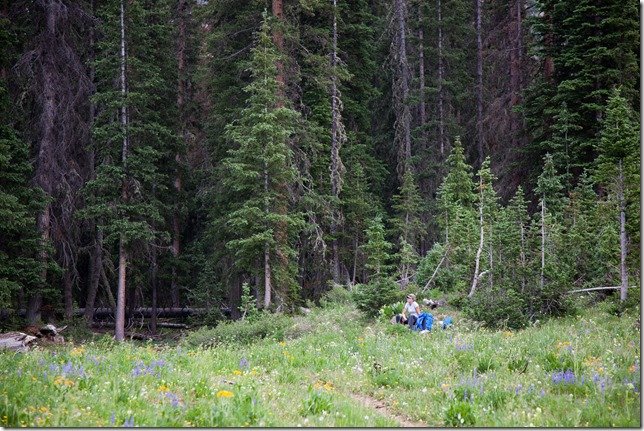 After we made that decision, my stress levels immediately decreased and I really began enjoying the trip. We decided to stop on a rock and eat our dinner while enjoying the warm afternoon sun bouncing off the wildflowers. It was one of those moments where we were both completely at peace with our surroundings, so we weren’t doing much talking; just listening. However, it took me all of 2.3 seconds to grab Will’s arm and dramatically whisper, “Will, there’s a bear!” when I saw a large four-legged creature walk into the meadow 100 meters in front of us! 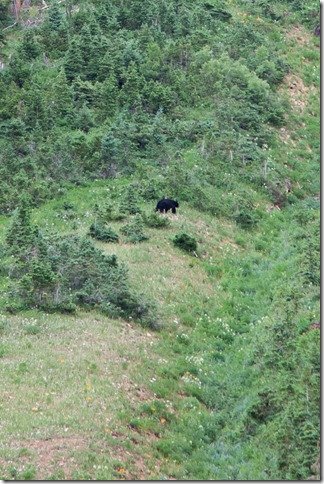 Sure as shit, there was a black bear! We’d been so quiet on the rock that he hadn’t realized we were there (or didn’t care!) and had sauntered out into the field right in front of us. For a split second I was scared, but then I realized that it was just passing on by and didn’t want to start anything. We sat there, mesmerized, and watched the bear stroll across the field in front of us. It eventually disappeared into a small grove of trees, but I knew it would momentarily reappear on the other side. Once again, I started smacking Will and telling him to grab his camera. You see, I’ve never seen a bear while backpacking in my life! I think Tally’s noise usually scares away the wildlife, so this was a new experience for me, and dammit if I didn’t want a photo!

After the bear sighting, I was practically euphoric and in such a good mood. This wave of giddiness carried me for another 30-45 minutes before I realized that poor Will was truly suffering. You see, by this point, we were around 10,500 feet in elevation with another 1000 feet to go before we arrived at basecamp at Capitol Lake. For me, this altitude is fine and if anything, I perform better at higher elevations (it’s weird, I know. I guess I can thank my parents for those genetics, huh?) However, Will has lived at sea level his entire life until he moved here in May, so his blood hasn’t quite acclimatized. He has completed dozens of high altitude backpacking trips in the past, so we already knew that the elevation would negatively affect him—I just hadn’t seen it in person! 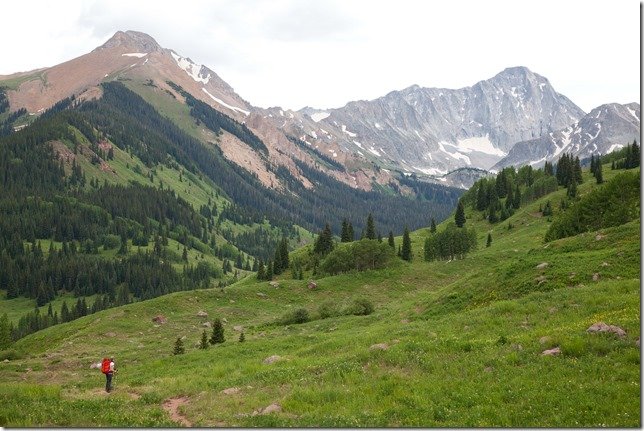 It started when I realized I was leaping ahead of him at a ridiculous rate. I would turn around and he would be 300-400 meters behind me. I wasn’t getting faster; he was getting slower. As we continued to climb up towards the lake, his legs became really heavy and he started stumbling over rocks and roots on the trails. His head was also pounding and his words were becoming slurred. Naturally, I started to get scared because I obviously didn’t want to see my boyfriend suffer through altitude sickness. However, he had his mental wits about him enough to explain that this happens on every trip. He assured me that he just needed to get to camp and sleep through the night; he would wake up and be a new man. I wasn’t convinced but I trust him, so we continued hiking.

We hiked the last mile or two with Will completely suffering. I continued to yap his ear off with questions, forcing him to give me verbal responses so I knew that his mental clarity was intact. However, I was still beyond ecstatic when we reached Capitol Lake and saw a sign that said, “Camping in Designated Areas Only.” We had arrived at basecamp! 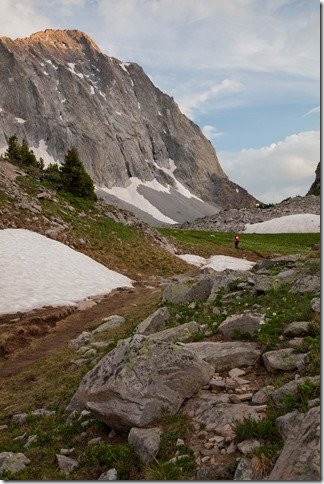 The shelf with all the designated camping sites

Because of their desire to preserve the vegetation, the Colorado Fourteeners Initiative has set up eight various “campsites” around Capitol Lake. Since there are never many people climbing Capitol Peak, I imagine they rarely fill up. However, the Fourteeners Initiative was doing some trail building over the long weekend, so there weren’t any sites left! 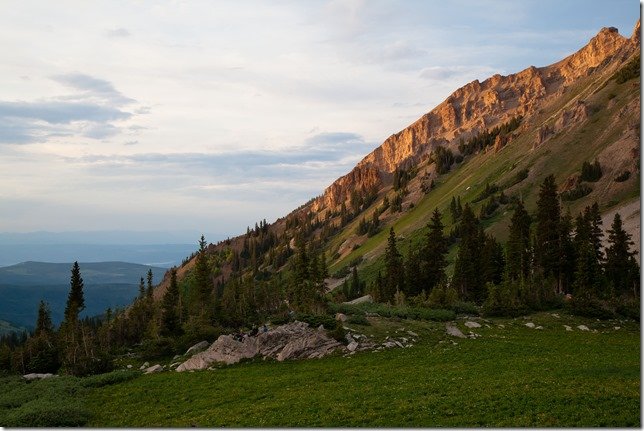 I quickly realized that it was going to take a bit of extra time to find a place to camp, so Will and I both agreed that he would sit on a rock and stay put until I came back for him. After speaking with the Initiative, I realized we had to hike back down the trail to leave the preservation area. Once we left the rocky ledge, we could camp wherever we wanted.

I scampered down as fast as I could, eager to find a place for our tent so that I could get Will in bed. I had noticed a small deer trail about 1/4 mile back, so I (literally) ran down the trail to find it. Sure enough, it wound through some trees and opened up into the most perfectly protected little clearing ever! A few downed trees surrounded the campsite, so we were even guaranteed places to sit- score!

I threw my bag on the ground and turned and ran back up the trail to get Will. The poor guy stumbled his way down to our new home and pretty much sunk onto the ground once he arrived at the site.

Setting up the tent was a treat for me since it was a new one that he had received for testing, and neither of us had ever used it before! Additionally, it was a fancy kind that uses trekking poles instead of tent poles, and I had never assembled anything like it. It took us a few trial and errors, but I finally got it set up enough that he could roll inside and pass out (not without blowing up MY sleeping pad first—he is always such a gentleman!)

Ok, this is long enough: to be continued manana!

Have you ever seen someone suffer from the altitude?

What’s the coolest animal you’ve seen in the wild?