Seriously y’all, I cannot believe this is happening: I am going to Jordan in four days! It hasn’t quite sunk in yet because I’m so busy preparing stuff at work for my absence, but I am beyond excited to explore the Kingdom of Jordan.

More than anything, I keep thinking back to March, 2012, when I received my first box from Columbia. At the time, no one had heard of the OmniTen program and I was completely confused as to why they were sending me a box of gear. Truthfully, I had yet to fully launch myself into gear testing and freelance writing in the outdoor industry: all of that came as a result of the Sedona trip. I played in the dirt, I climbed mountains, and I talked about those topics ad nauseam on social media; why would any company care about that?! {Sidenote: I’m really, really glad they did!}

For longtime readers, you know that our first trip to Sedona was fantastic and I made some lifelong friends in the Grand Canyon. I talk to Heidi, Katie and Katie on a weekly basis and sometimes have to remind myself that we really haven’t spent that much time together in real life. But does it phase us? Not in the slightest!

Flash forward a year and a half and our entire crew was back together again, along with the 30 other peeps from the subsequent seasons. We met up in Park City for the highly-anticipated {and ultra mysterious!} OmniGames where each of us battled each other for the coveted prize: a spot on the fifth season of the OmniTen along with a trip to the Kingdom of Jordan. Yup, you read that right: Columbia was diving into the deep end with a go-big-or-go-home style of trip. No more backpacking in Arizona or white water rafting in Oregon: #TryingStuff was going international!

The best part was that no one competing let the desire to travel get in the way of their humanity and compassion towards their friends. Did every single person want to win? Oh, hell yes! However, that didn’t stop everyone from helping their friends on the tough ropes course or offering up tips on the elusive fire-starting obstacle. We were friends first, competitors second. It was also a great chance for me to get to know my teammate, Caleb. I mean, the man needs no introduction since he comes from GoPro fame with vids such as this:

Who the hell just “does” double front flips on skis?! I’d break my face so fast that I could barely tell what happened. Caleb is legit y’all!

Having said that, Caleb and I were psyched to learn we had finished in second place after all of the OmniGames scores had been tallied. We were going to Jordan!

Since then, Columbia has played their cards very close to the vest and in true #TryingStuff fashion, we are all without a clue! We do know that they are making a movie {or documentary?} of the trip and have even hired a producer. We were all introduced to Mr. Pedro Peraza awhile back and since then, I have been trying to send video snippets of my life his way. You see, Columbia also ensured we were hooked up with a new GoPro Hero 3 camera, so I’ve been channeling my inner Hollywood while carting that sucker everywhere I go. I even took the darn thing to CrossFit and filmed myself while fumbling through 14.4—that’s almost humiliating!

Per usual, we were also astonished to see an absurdly large box of gear arrive at our homes a week or two ago. Sure, Columbia sending packages is not unusual, but they really outdid themselves for this trip: 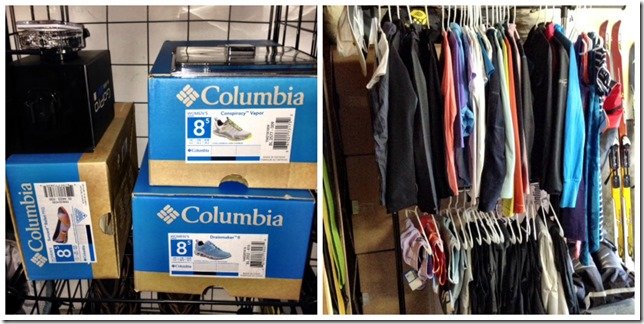 Will literally went out and bought a new gear rack just to hold the massive amount of clothes they sent us for this trip. Bananas.

I mean, since they are making a movie, I realize they want us wearing their gear the entire time, so I get it….but still! I’m pretty psyched to check out some of the lifestyle pieces since that is a relatively new area of gear of me. I’ve worn all of their outdoor stuff, but there are a few dresses and even some ballet flats that I’m looking forward to putting on.

Other than the gear and the movie, we know nothing. Literally, nothing. We heard talk of potentially getting to eat dinner with the King, but I have no idea if that actually panned out. We also have another conference call this week, but I’m willing to bet they won’t divulge a single detail: mystery is more fun after all, right?! {Mysterious trips seem to be my forte as of late!} They did ask for our smart phone preferences {iPhone 5 baby!} so that they could provide us with phones to use in-country. I thought this was incredibly thoughtful since I can now keep up with Will and my family, but I also get the upside for Columbia: that means y’all will get to follow along on Instagram and Twitter! {If you’re interested, check out the #OmniTen and #TryingStuffInJordan hashtags. I suspect they are going to blow up!}

So, what do I know? I am heading out to Chicago this Saturday where I will meet up with everyone so we can catch the same flight to Amman. It will officially be the longest flight of my life {it even beats LA to Tokyo!} and I’m looking forward to every single minute. The rest of the crew will be in country until the 16th, but I’m cutting out a few days early on Sunday, April 13. Why? Because I have a wedding in Bali to get to!

More details on that tomorrow!

Have you ever gone on a surprise trip?


How well do you handle mystery while traveling? Do you like to plan every single minute or do you prefer to go-with-the-flow? I will give you one guess as to which category I fit into