Weird, right?! When Cindy called me last week and asked if I wanted to take a spin class at a yoga studio on Saturday, I was kind of confused. To the best of my knowledge, CorePower and spin class are not synonymous.

Goes to show you that I know nothing.

Long story short, I agreed to the class on Saturday morning. I was already taking Will to the airport at 4am, so a 9:30 class in Denver truly didn’t seem that early. I showed up at 9:15, talked with the lady at the desk, and headed into class.

CorePower Ryder {or CPRyder, as the regulars call it} is something that a few select CorePower locations are testing. Based on my limited research, the LoHi location is the only one in the Denver area that offers the class. And if you’ve ever been to a regular spin class, you’re more-or-less prepared for the CPRyder class. Spin bikes? Check. An instructor at the front of the room? Check. Clipless {SPD} pedals? Check.

At 45 minutes, the CPRyder class is a bit shorter than regular spin classes, and the room is lightly heated to 85 degrees. However, the main difference doesn’t fall within the time spent in the room; check out these bikes! 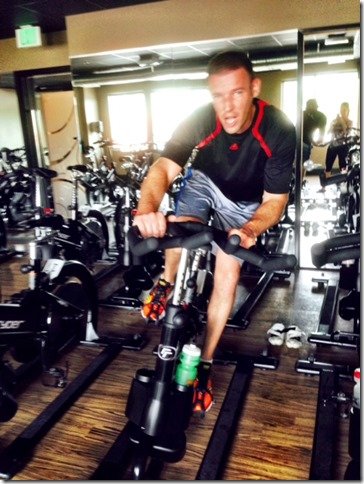 Instead of traditional spin bikes, the CPRyder class uses “RealRyder” bikes. In essence, the main difference is that the bikes have 22 degrees of movement from side to side. Obviously, that doesn’t mean much when I just use words to describe it, so check out this video that I made my friend Craig shoot for me. I decided filming during class was a little over-the-top, so the three of us stuck around after class and Craig acted as my model!

When the class first began, I honestly wasn’t impressed with the bike’s flexibility. Yes, it bent side to side, but I didn’t really notice a difference in the workout. CorePower claims that the side-to-side motion makes the riding feel more like a bike outside, but I don’t know if I really agree with that.

However, as the class progressed, I realized that I was using my core muscles a lot more than I realized. When you stand up out of the saddle, the bike will totally flop around if you don’t use your abs to engage and stabilize the bike. Once I grew tired and wasn’t automatically flexing, the bike began flopping everywhere! Turns out, those abs were getting a workout!

I also managed to get an upper body workout which shocked the hell out of me. Lots of spin classes do “handlebar push-ups” which really don’t do much of anything for me. However, our instructor had us work through an exercise where you “turn” your bike and really lean into the side, cranking down on the handlebars. It took a lot of tricep muscles to turn that damn bike, and my arms were semi-sore afterwards!

In a nutshell, here is my take on the CorePower Ryder classes:

Final takeaway: do I like the class? Yeah, I do! I’d still rather ride outside, but that applies for any spin classes. I mean, spin is really just the treadmill of the cycling world, right?!

Have you ever tried a CPRyder class? What did you think?

The Most Disappointing Series Finale