Almost immediately upon beginning my Crossfit journey in September, 2012, I realized that it is an insanely polarizing sport. Peeps either love it or hate it, and both parties seem to be equally vocal as to their reasons why. 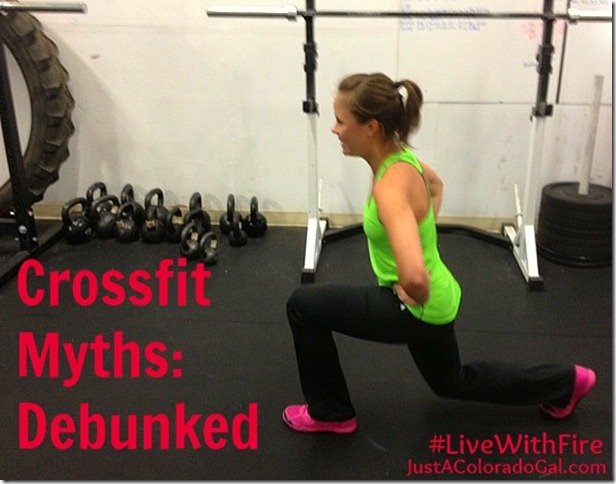 Wearing both my Reebok PWR pants and my fave pink Nanos.

Luckily for me, I fall into the “love it” category and am so glad I started to incorporate the workouts into my weekly rotation. However, I do get very frustrated when I see others unreasonably bashing the sport, making fun of it, or criticizing those who enjoy it. Ain’t nobody got time fo dat! I’ve personally experienced this on some of my social media platforms, and quite honestly, it drives me bonkers. For example, I had an Instagram follower insist my back injury was from Crossfit, even after I told him my doctor said it was congenital and unrelated to any form of exercise. He went on to call me “stupid” because I continued with the sport. First of all, he isn’t medically certified in the least, and second of all, he has never even tried a workout. Lastly, he really pissed me off. Hmm.

The more I think about it, however, I wonder if Crossfit is still a big unknown for many, and that’s why it is so polarizing. So, because of this, I decided to shed some light on a few stereotypes that concerned me before I began working out at Big Horn!

1. The gym is full of rock hard bodies and meathead mentalities. 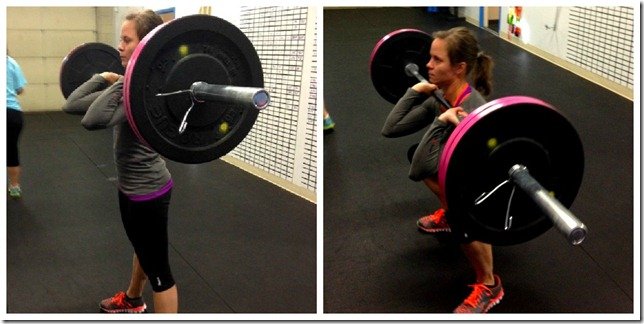 False. Granted, I can only speak for what I’ve experienced at my gym, but this is absolutely not true in the least. Our coach Brian is pretty beastly, but he is far more motivating than intimidating! Maybe it’s because Big Horn is a relatively new box, but most members are trying to get into shape or take their fitness to the next level. The gym has a “goal whiteboard” where everyone can jot down their Crossfit goals, and they range from a shrinking waist line to mastering an unassisted pull-up (Hello, that’s mine!) I see far more “meathead” personas at 24Hour Fitness than I do at Big Horn. Truth.

Debatable, but I’ll call this one false because it depends more on the individual than it does on Crossfit. I don’t have any stats in front of me, but I’ve been continually told that there has been a rise in athletic injuries due to WODs. However, in my opinion, this will only happen if you can’t check your ego at the door. Sure, you’ll hurt yourself if you try to go too big too fast, but isn’t that the case with anything? I’ve had numerous idiotic running injuries from pushing the mileage too high, too quickly. Is there a difference?

3. Everything involves a weird acronym or sexy sounding word. 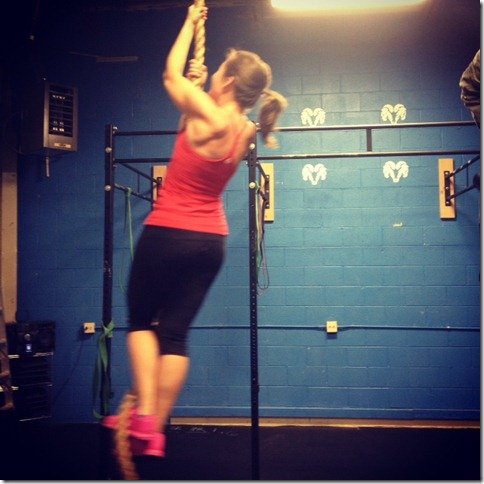 See those skinny straps on my Reebok Crossfit Racer Long Bra Top? I’m convinced they make me look like I have back muscles. Fo realz.

True! I never thought I’d see more acronyms than I did in graduate school for my M.Ed, but Crossfit has proved me wrong. We’ve got EMOTM, AMRAP, RFT, DU, OH, KB, and 1RM to name a few. In addition, we’re talking cleans, jerks, snatches, boxes, and WODs. But you know what? It’s okay to laugh! I was too immature to contain my giggles last week when Brian was explaining a clean and jerk and stated, “You just have to jerk it!” But then he laughed, Will made fun of me, and all was right with the world. The acronyms take some getting used to, but they eventually start to make sense….

4. It’s hard to get a decent workout in less than 30 minutes. 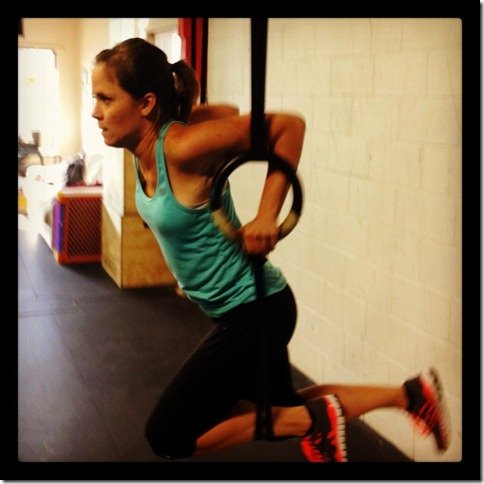 False. I definitely had this same question before starting at Big Horn. After all, I was used to 9 hour high altitude hikes and 2 hour training runs! However, it is possible; it’s just different! When I run for an hour, I burn around 500-600 calories according to my heart rate monitor. During WODs, I’ll typically workout for 30-45 minutes and burn 450-500 calories. At the end of the hour, I’m still burning the same amount of energy; I’m just doing it a lot more quickly during the Crossfit workout!

True. Hell yes it does, although not in the “I just injured my knee” type of way. Typically, the cardio WODs are less than 20 minutes but they push me to limits that were previously unknown. I try my best to be totally spent at the end of the workout, no matter how short it is, so the cardio period is brief but intense. Sweat will literally roll off my face (so much so that we have to clean the floors afterwards!), my throat will burn, and I’ve definitely contemplating puking a few times. However, this insane level of intensity has made other, less elevated cardio activities seem easier in comparison. By default, my running and hiking have improved because of my stronger muscles and because of my higher tolerance for pain. Score!

True. This was my #1 concern with the sport before I began, and while it hasn’t disappeared, I’ve simply found ways to justify it to myself. I typically go to morning classes and quite frequently, it ends up just being Brian and me. In fact, this happens at least 1/3 of the time so it’s almost like I have a personal coach. Additionally, I’ve just decided that I love it enough that I’m willing to spend the money on it. I’m fortunate to have a stable job and enough income that I can afford the additional cost. However, I also don’t have a family or kiddos either! I realize not everyone is in the same position and I don’t mean to minimize that. For me, however, I have just made it work.

Are you a Crossfitter? What other stereotypes can you think of?

If you’re not, how do you feel about Crossfit?