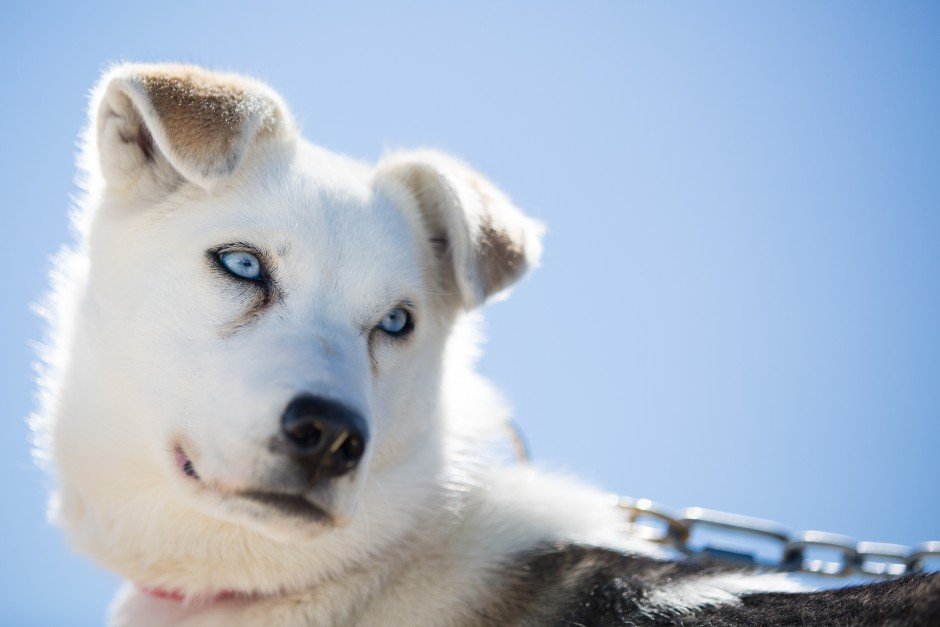 It was pure pandemonium.

Seven Husky sled dogs of various colors are bouncing and yipping, howling and nipping at each other while tied to the sled line. A single metal hook digs into the snow, acting as an anchor: this piece of metal is the only thing holding that entire line of friendly furballs in place. The second that brake is lifted? It’s like a bullet out of gun!

And thus began our weekend of dog sledding at Snow Mountain Ranch!

Will and I were spending the weekend at Snow Mountain Ranch, a YMCA property outside of Winter Park, Colorado. We’d been invited to try out the more adventurous activities and dog sledding was at the top of my list. I’ve spent a fair bit of time with sled dogs, but I really wanted to learn more about the sport. What did they eat? How did they train? Fortunately, our experience began with an entertaining talk by Steve Peterson, the chaplain and sled-dog program director at the YMCA. 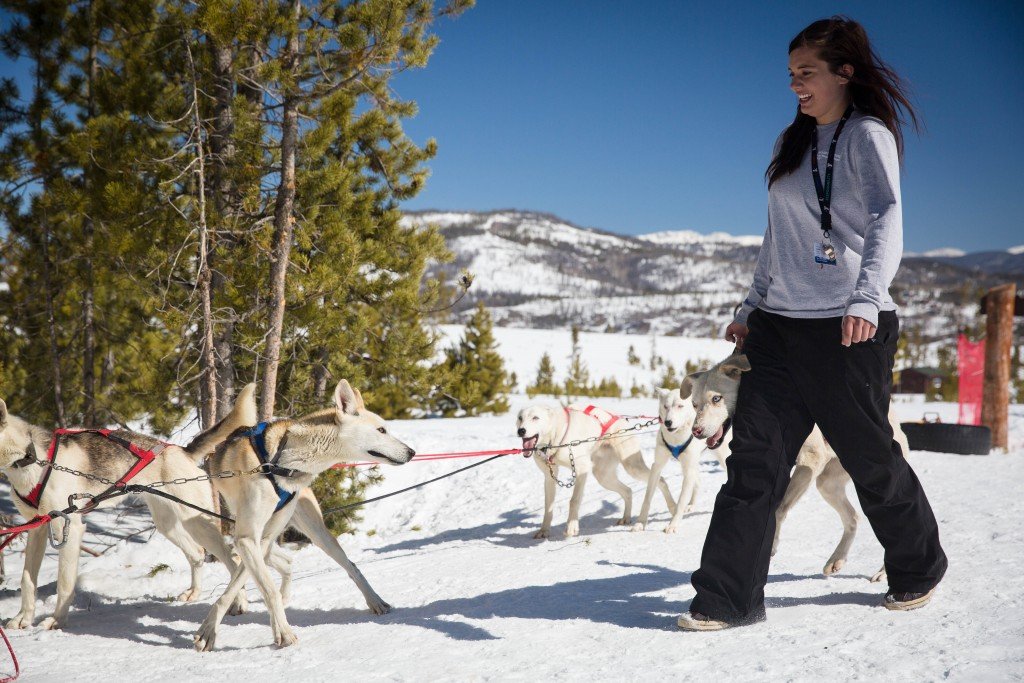 You know how an individual’s face simply lights up when they are passionate about something? That’s how it was listening to Steve. He told us the basics of dog sledding, but he also regaled us with ridiculously entertaining stories from his many years on the snowy trail. I daresay I remember him acting out one terrifying accident where he was stuck holding onto the back of the sled while the out-of-control dogs raced through the woods…while dragging his body!

But more than anything, I realized how much Steve truly loves these animals. He addressed the concern that many have: why are these dogs so darn skinny? Why don’t they look like the fluffy Huskies you see in the movies? 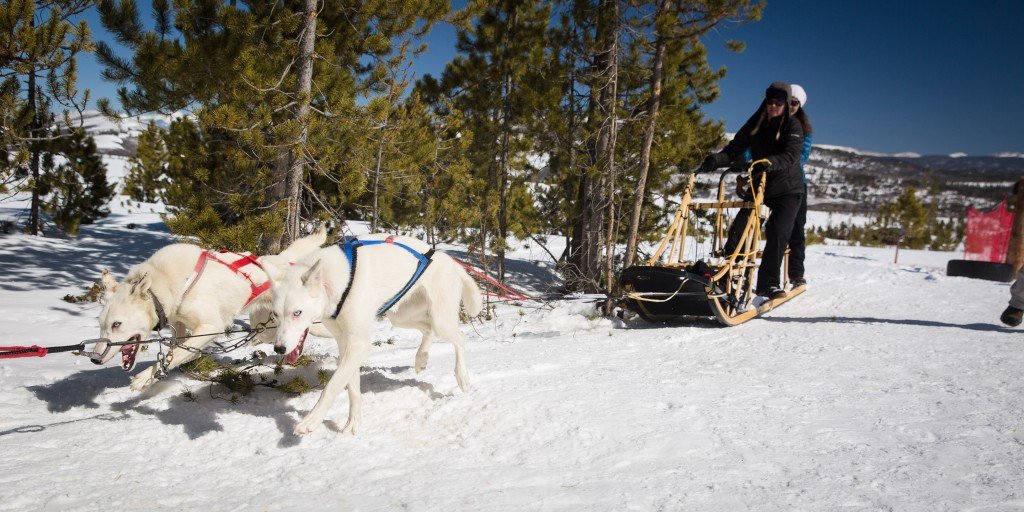 Because they love to run. And just like humans that run dozens of miles every day, they burn through calories. He walked us through their diet and how many thousands of calories the dogs eat daily, and there is no doubt; they are well fed and well loved. I even got teary-eyed when Steve spoke about his beloved Yukon, his favorite lead dog that had passed the year prior. I can’t speak for Steve, but it was clear that he loves all of his dog as if they were his children.

And just like children tend to be, they were flipping bonkers when they realized they got to play! 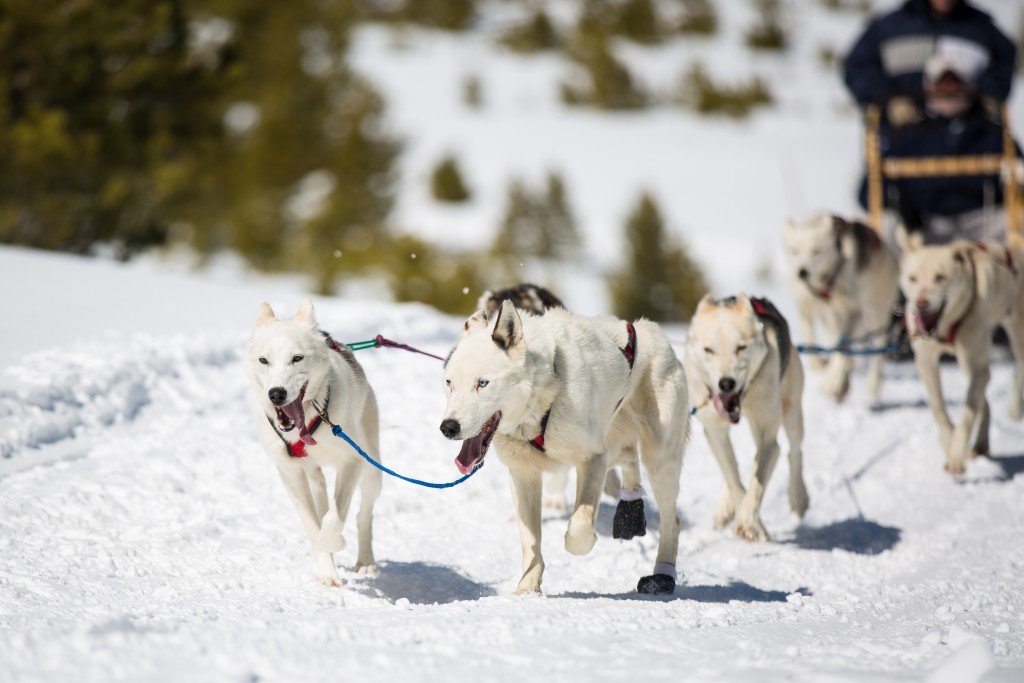 Seven dogs pull the sled with three pairs and a single lead dog. Of course, Steve has dozens of others dogs that sub out at regular intervals. While waiting for our turn to ride the sled, I spent a lot of time at the “rest” truck with the dogs who were not running. Each had his own patch of straw to lounge in, and most were basking in the sunshine. A few pups came along for the ride, and their exuberance was the cutest thing in recent memory! They were too young to pull a sled, but they were learning the sled dog behaviors. Of course, they didn’t have the maturity to simply accept the love and attention like this older dog: 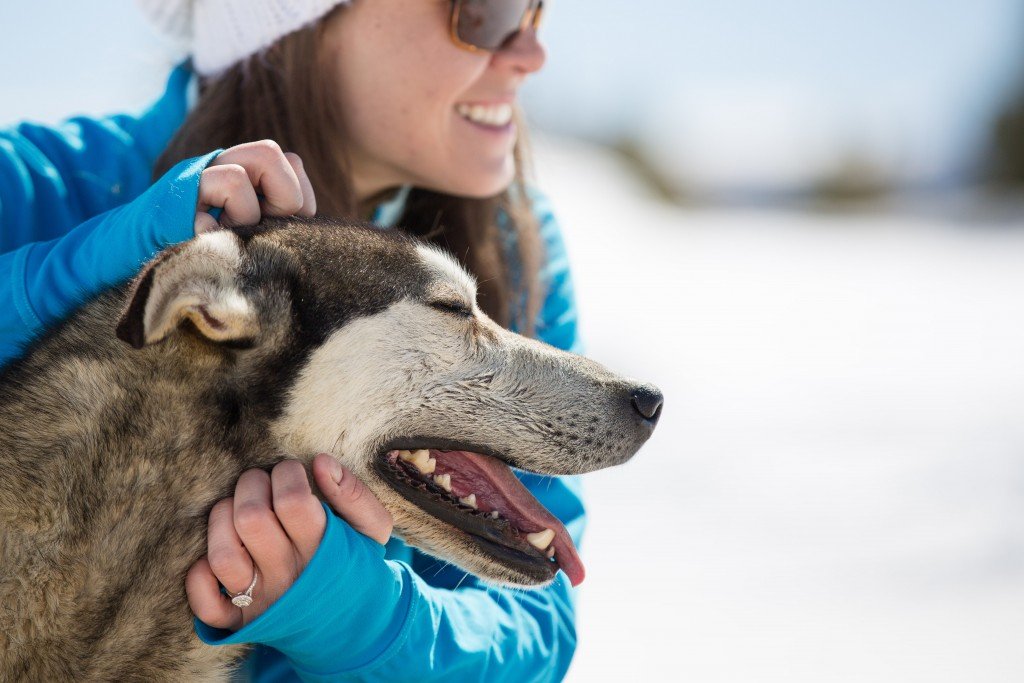 Instead, the puppies lost their minds anytime I approached. Jumping, yipping, licking my face, climbing my legs, it didn’t matter. They were excited about life and I couldn’t help but smile as we cuddled. 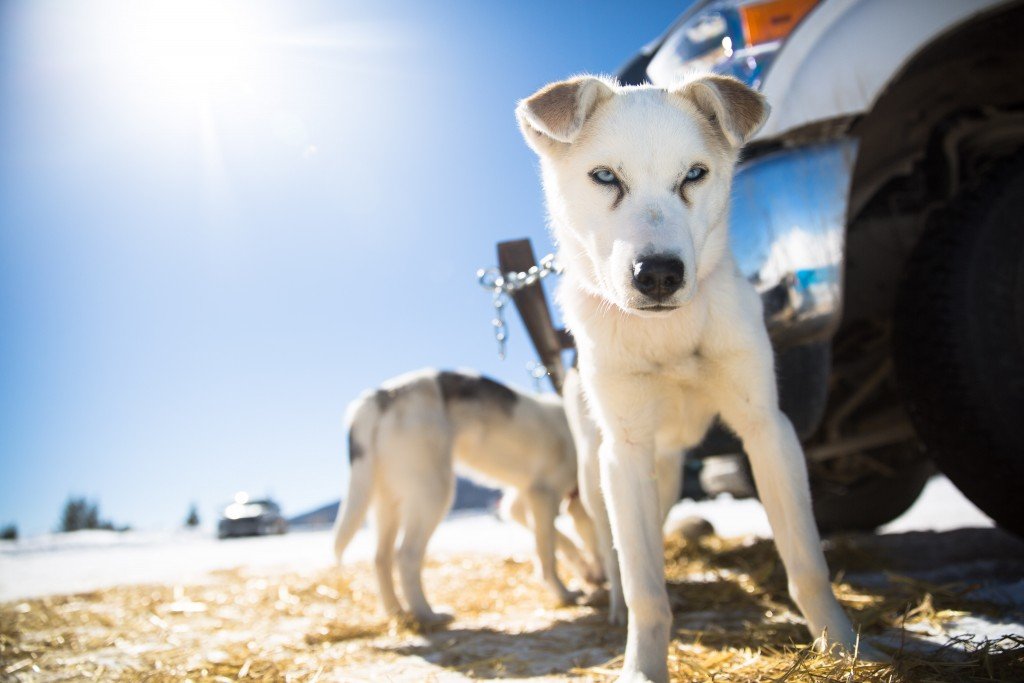 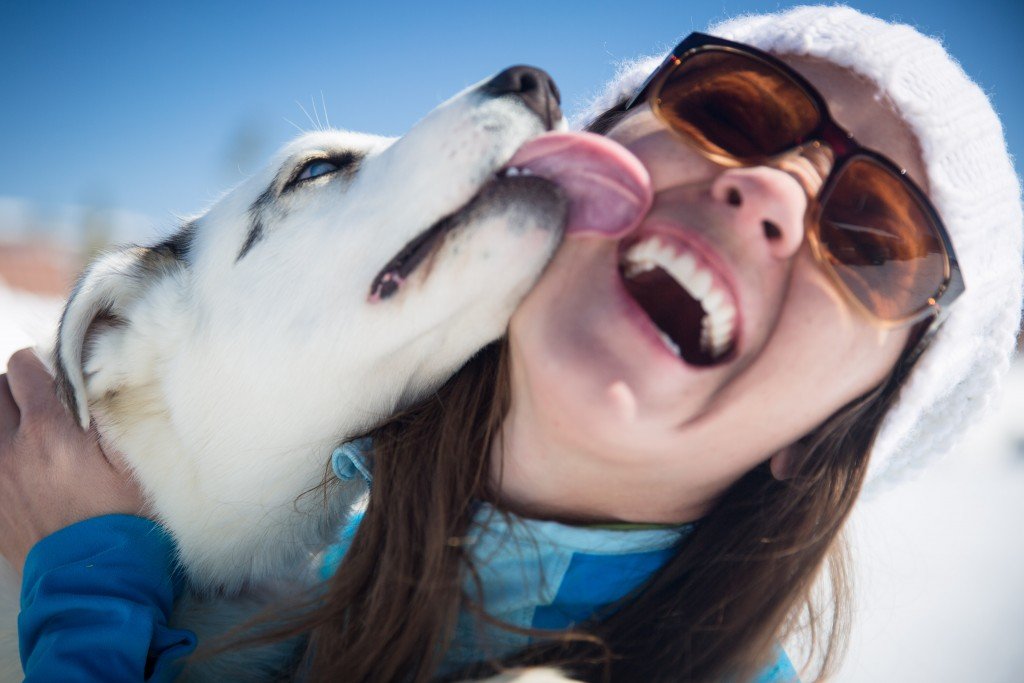 {Will was so close to finding three puppies in the back of our car!}

As for the sled ride itself? Incredible. My musher was Martha Sortland, a talented athlete who competed in the 103-mile John Beargrease last January. She clearly knew what she was doing, so I took her advice when she suggested {for the fourth time} to, “Hold on tight!} And just like that, she pulled the anchor out of the snow, and our dog team took off!

For dogs that look so small, it’s amazing how much power they have! They pulled our weight effortlessly and even had leftover energy to nip and squabble amongst themselves– while running. I initially found myself wanting to jump off at every hill, afraid that my body weight was too much for the dogs. But I quickly remembered Steve’s story about the dogs taking the sled and running like crazy; probably not my best idea! 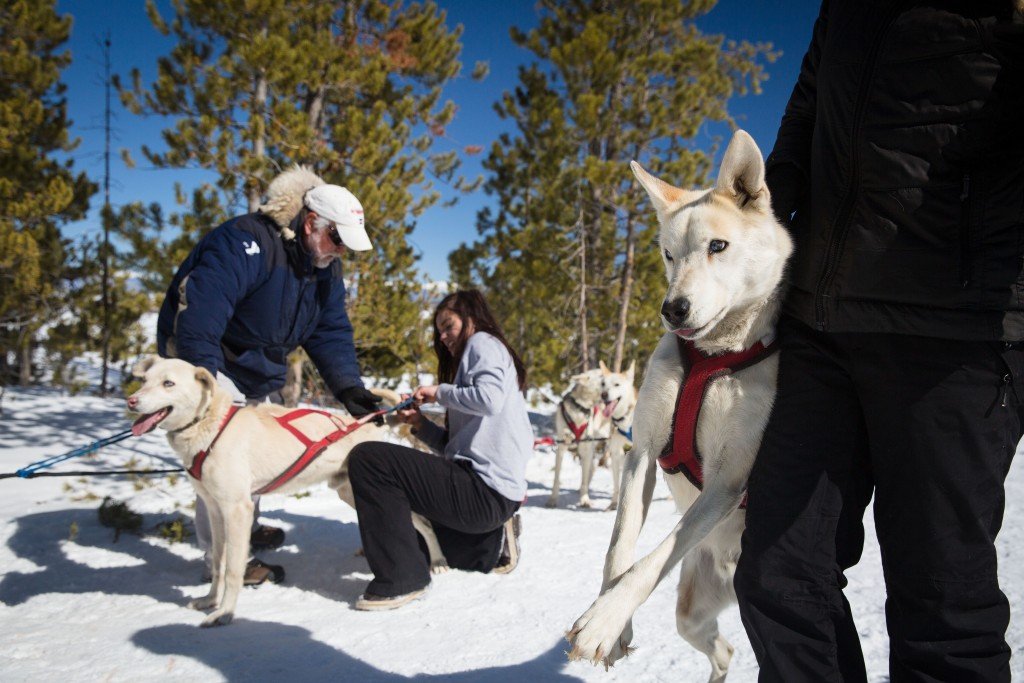 Instead, I held on tight as instructed and marveled at the beautiful dogs running. I watched their doggie smiles as they tore through the snow, happy and content to be doing what they loved. And as the sun shone down on my face and the wind stung my cheeks, I realized that we could all stand to learn a lesson from those dogs. 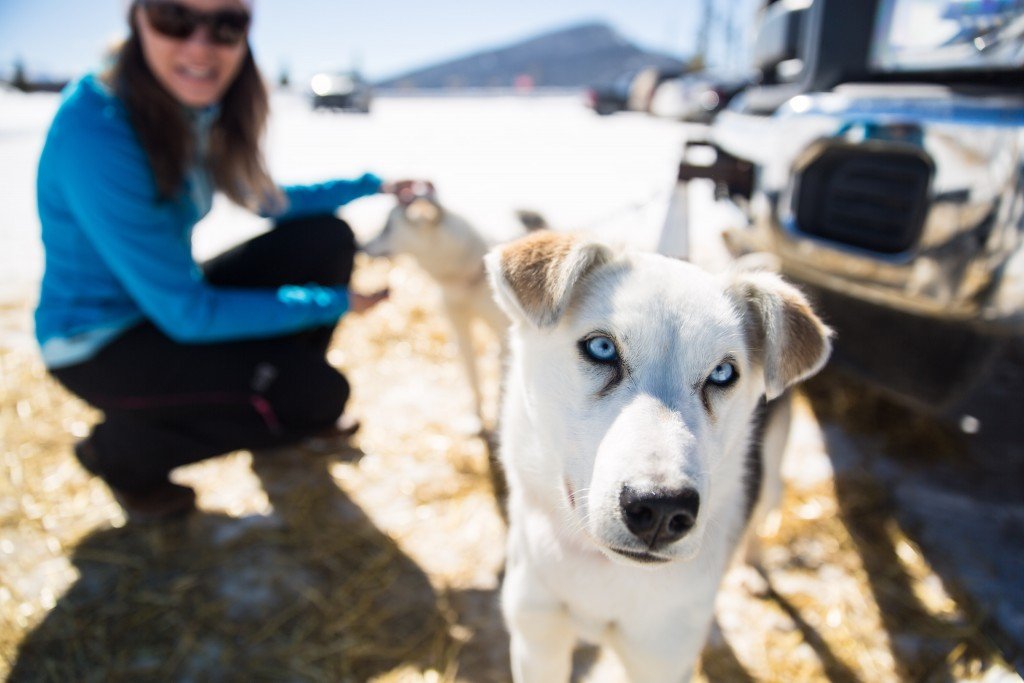 If You Go Dog Sledding at Snow Mountain Ranch:

Standard Ride: These run every Monday and Saturday morning. The presentation begins at 8:30 and the rides begin around 9:15. The presentation is free and open to anyone. The standard ride costs $30 to Snow Mountain guests, or $50 to day guests. Crafts, hot cocoa, and s’mores are offered to those who are waiting to ride the sled! {And trust me, the s’mores are tasty!}

Advanced Ride: On Friday mornings, this is only for guests staying on the property. This is a longer private ride, lasting roughly 50 minutes. Because of the exposure to cold, it is not available to children under 5. The advanced ride costs $150 which covers one adult and one child (ages 6-10).