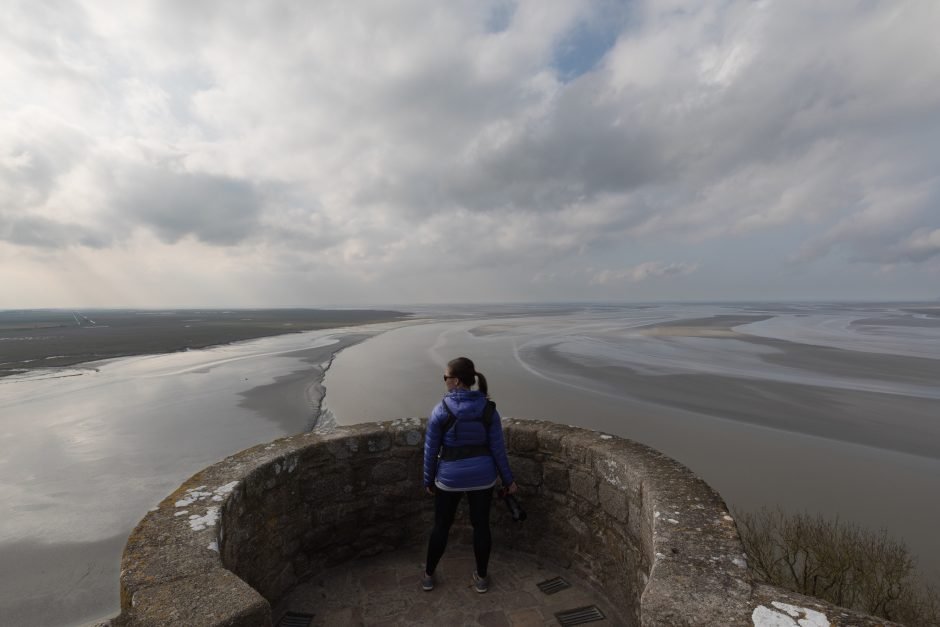 Paris captured my heart in 2002 during my first visit. But it turned into a binding love in 2014 when I returned with Will for our engagement. By the time we returned yet again in 2016, we enjoyed a long-standing relationship. It’s a beautiful city and I’ll forever have a place in my heart for Parisian culture. But while planning our trip to France this past March, we knew it was time to branch out. Rather than kick around ol’ Paris for the fourth time in almost as many years, we broadened our horizons and set our sights firmly on new-to-us geography: Northern France.

Northern France has so much to offer but it’s a part of the country that often gets overlooked, especially by Americans. After all, there is no Eiffel Tower or world-famous museum and the weather can be tempestuous at best {especially in the winter!} Nevertheless, we booked an AirBnB and a rental car, figuring we could suss out the itinerary later. 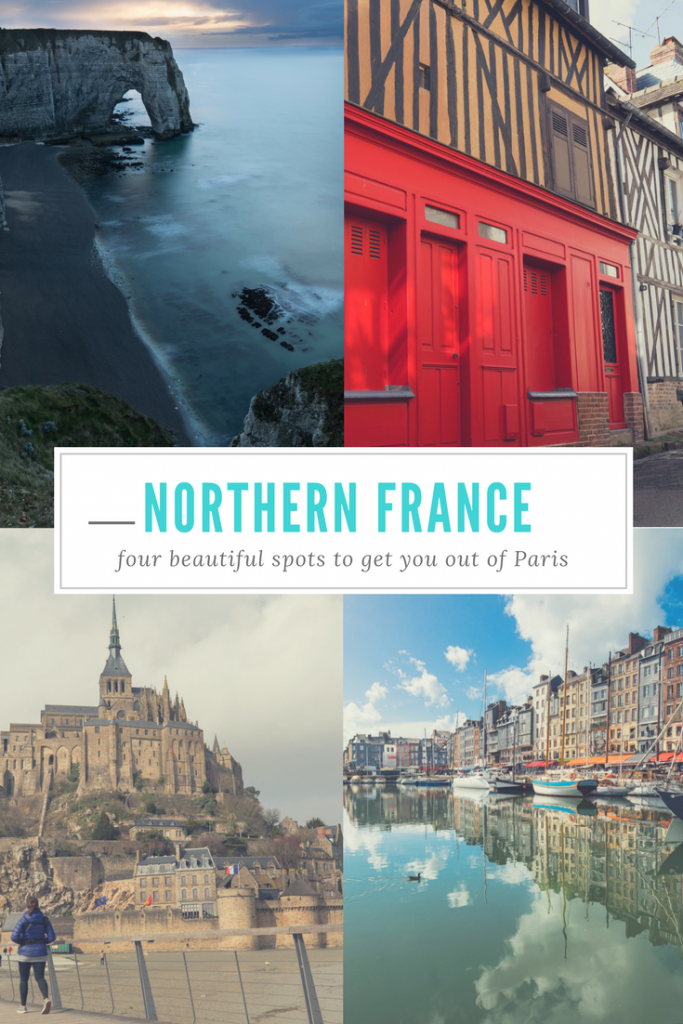 Sure enough, we didn’t regret it. Northern France is stunning and I only wish we’d had more time to explore! You better believe we’ll be making a return trip. Until then, check out our four favorite stops below, and definitely add them to your itinerary if you plan on visiting France in the near future!

While deciding where to call home base, I naively typed the phrase “most beautiful towns in France” into the Google machine. High tech, amiright? Most responses were towns located on the France-Switzerland border, and for good reason; it’s easy to be beautiful when towering mountains are the backdrop! But a few of these lists mentioned a small port town called Honfleur. Glancing through photos, the buildings immediately caught my fancy, so we booked an AirBnB smack in the middle of downtown. It’s not a big deal if we don’t like it, I explained to Will. Worst case scenario, it’s just a place to rest our heads. 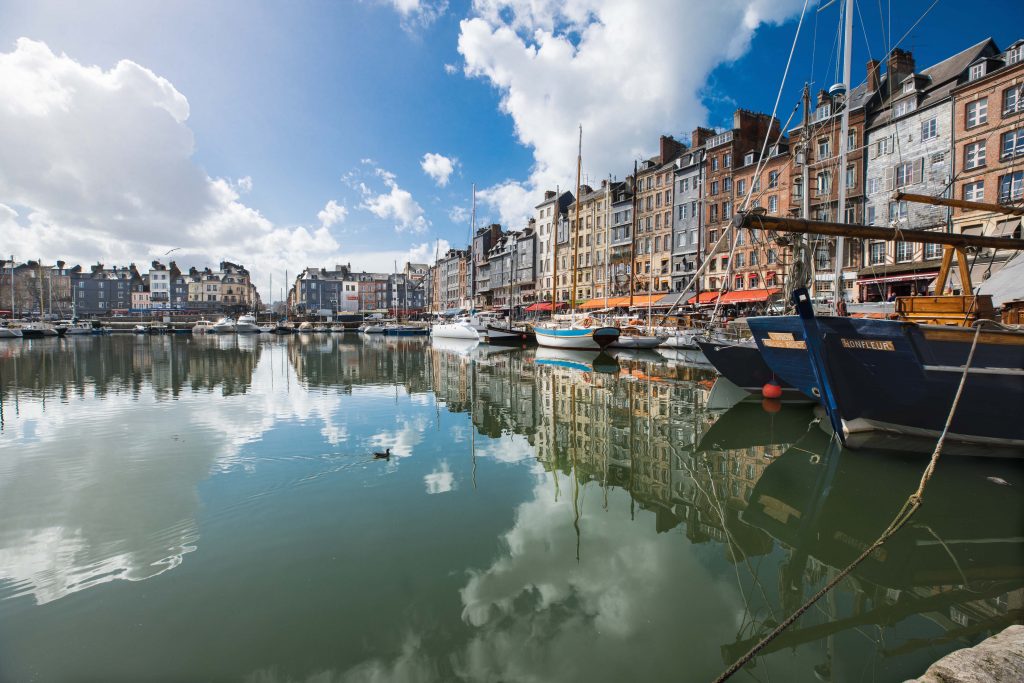 Fortunately, Honfleur makes it impossible to dislike. One of the first things we encountered while driving into town was the Vieux Bassin, or old dock. This stunning little port is likely Honfleur’s main attraction, and for good reason. Yachts have replaced the old fishing boats of yore, but it’s easy to imagine old-time fishermen walking around the docks.

Tall, narrow timber-framed buildings with slate roofs line the streets around the port, decked out in their cheeriest colors. To dodge jet lag {and keep the baby awake}, we snagged an alfresco table at one such building and housed a stack of Nutella crepes before lunch. While inhaling the chocolate goodness, I commented to Will: This town is so damn beautiful. I feel like I’m living in Beauty and the Beast.

Because that’s how I felt about Honfleur: like it was straight out of a Disney movie.

In addition to the beautiful port, Honfleur has an adorable town center with tiny cobblestone streets zig-zagging every which way. Our AirBnB was a short walk up one such street and I never got tired of window peeping at the art galleries and boutique wine stores and chocolate shops as we walked to and from town.

In fact, one night, Will dropped Liliana and I off at the flat, saying he was going to park the car. He was gone an abnormally long period of time and I had just begun to worry when I heard his footsteps climbing the steep staircase. He opened the door with a huge grin on his face, and I immediately saw why: instead of parking the car, he had jogged down the street and snagged a bottle of wine and a box full of delicious chocolates from one of the shops. THIS is how we do vacation, he told me.

Man, I love this guy.

The Battle of Normandy: D-Day Beaches

Just after midnight on June 6, 1944, thousands of American, Canadian, and British forces began an aerial assault on the 50-mile stretch of Normandy coastline. Broken into five beaches, the Allied attacks have become known by the name of the corresponding beach: Omaha, Gold, Juno, Sword, and Utah. The amphibious attack began around 6:30am and with it came the infamous Battle of Normandy. By the end of the first day, only two of the beaches were linked (Juno and Gold); the remainder of the beaches were not linked until June 12, six days later.

D-Day was the largest seaborne invasion in history and still takes credit for beginning the liberation of North Western Europe from Nazi-German control. This battle laid the foundation for the Allied victory on the Western Front. But while the invasion was considered a success, it didn’t come without loss. Over the entire 76-day battle, the Allied forces reported 210,000 casualties and 37,000 troops killed. 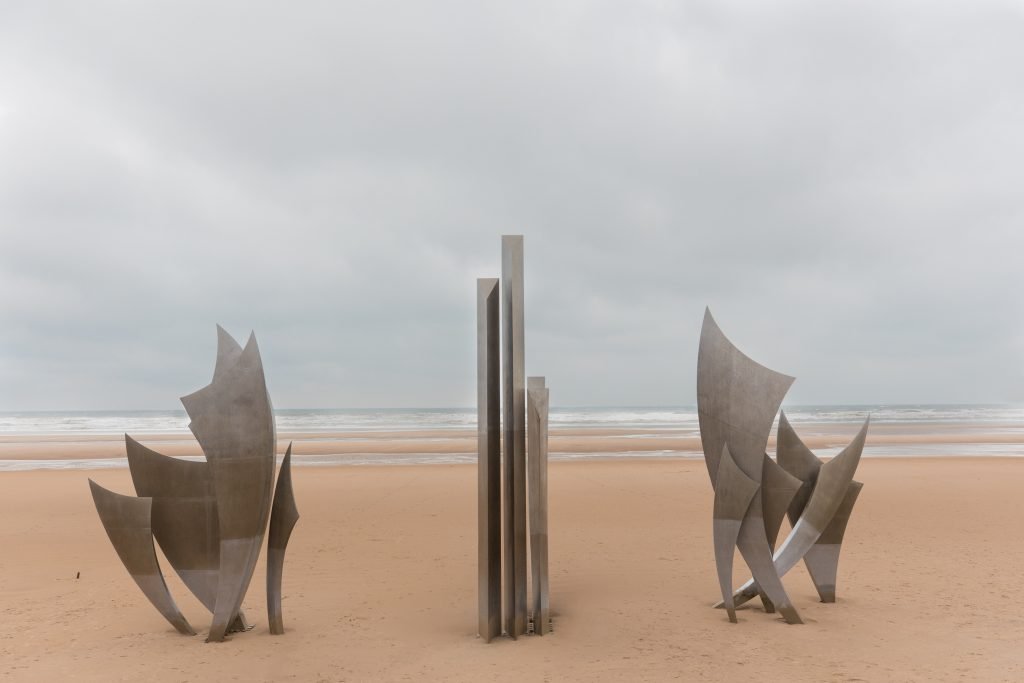 I thought about all of this while standing on Omaha Beach. The weather seemed fitting: icy wind gusts whipped through my Gore-Tex shell and needle-like rain drops drilled the side of my face, leaving stinging and angry welts. The weather was so miserable that Will and I opted to leave Liliana in the car and take turns on the beach. This was no place for a baby.

I stook in the sand next to the stainless steel sculpture that commemorates the soldiers. In front of me, thundering waves crashed into the shorelines and I imagined thousands of soldiers riding rafts through the white caps, not knowing whether they would ever get a chance to return home again. Behind me, I studied the grass-filled bluffs where German soldiers lay waiting. I tried to imagine men climbing those bluffs with bullets raining down on them. Such courage. Such bravery. Such selflessness.

I’ve been told the beaches are a veritable zoo during the summer months but I’m glad we visited in the winter. Between the horrific weather and the lack of people, I felt I was able to wrap my head around the somberness of the location and its historical importance in a way that would have been impossible with tour buses full of people.

I’ll admit it: when showed up in Étretat, I was not in the tourist kind of mood. Liliana experienced a major diaper blowout as we pulled into the parking lot and then proceeded to throw a fit while we tried to change her outfit in the small backseat of our rental car. Fair enough, kid, I thought to myself. I wouldn’t like to sit in a diaper either. The situation escalated when we realized that while normal in this neck of the woods, the weather was the kind that can make you miserable: chilly, windy, and wet. This called for multiple layers, a fleece onesie, and then a snowsuit for Liliana before cramming her inside the Ergo on front of me. Needless to say, she was less than pleased and made her opinions known, loud and clear! 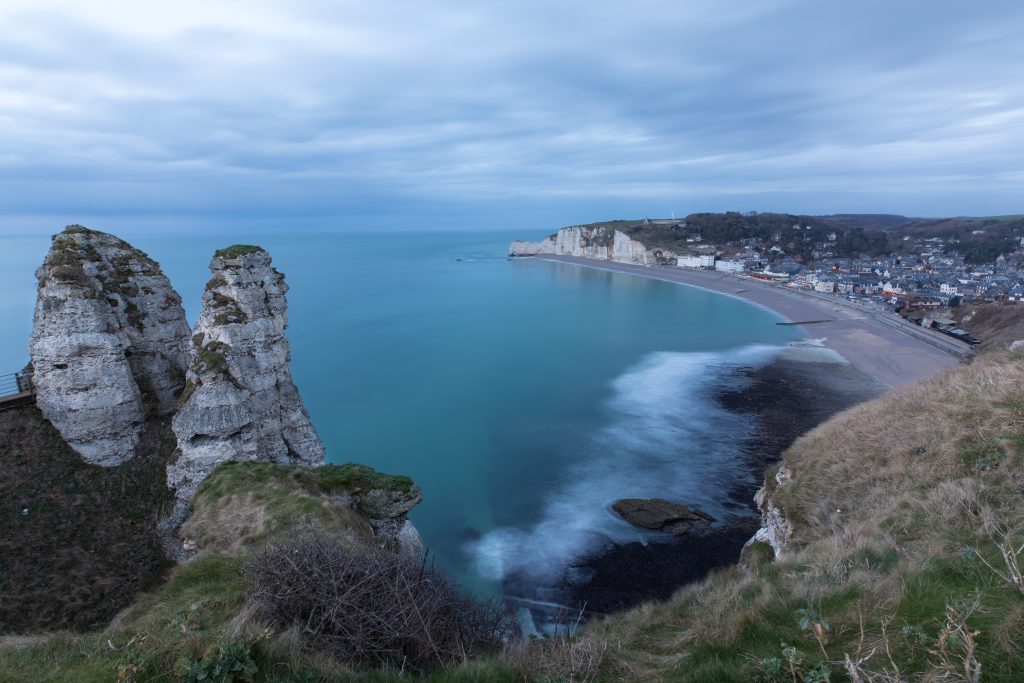 But, the apple clearly didn’t fall far from the tree with that kid. We gave her a 10 minute cap: if she wasn’t over it within that time frame, we’d head back to the car, figuring she would tell us if she was uncomfortable or cold. But turns out, we didn’t need that much time. I hadn’t been wandering around the stone-covered beach for two minutes before I realized I was walking in silence. I glanced at her face and saw her wide-eyed and content; she was in love with the beauty of Étretat, too!

She isn’t the first. Famous artists such as Monet and Eugene Boudin flocked to Étretat to paint the white chalk cliffs and natural arches that dramatically rise from the misty and murky beach. I’m no artist, but I understood the appeal. These are like the Cliffs of Insanity, I commented to Will. You know, from Princess Bride? 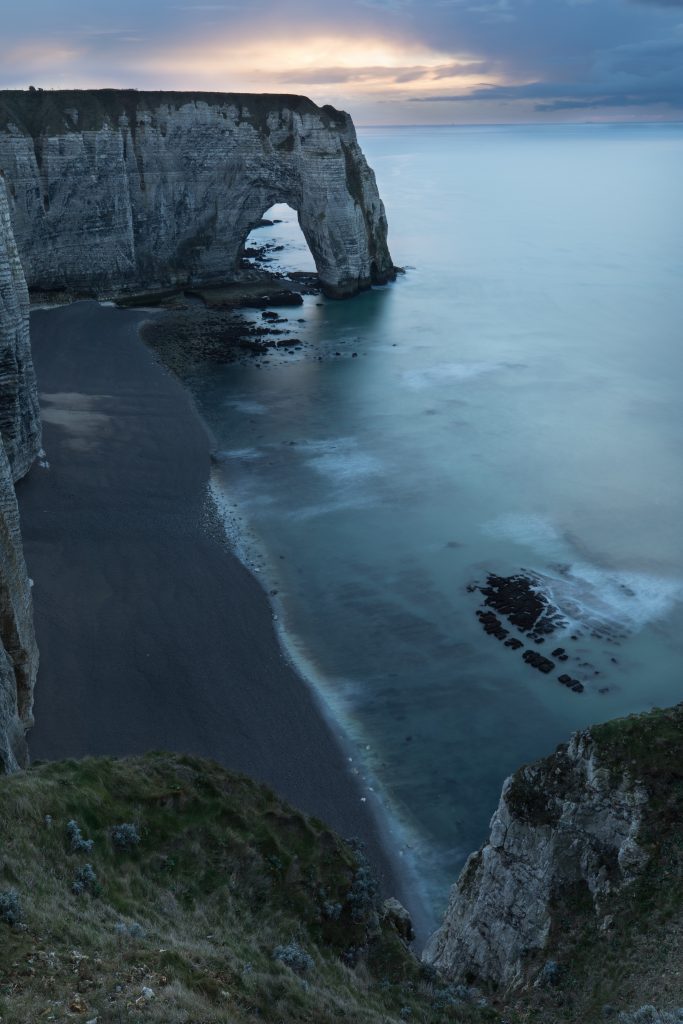 Will headed down to the water with his camera and I scampered around the beach with Liliana, climbing in and out of caves and poking throughout the various tide pools. The rain fell heavily so I busted out an umbrella to keep Liliana dry. I was quite the sight, climbing up and down the cliffs with a sleeping baby hanging on the front of my chest and an umbrella over my head, but you do what you gotta do, right? I found one deep cave that gave access to a windy, dark tunnel you could walk through to reach the other side of the arch. I considered it for a moment, but then remembered the baby sleeping on my chest. Considering tide was rolling in, it was likely better than I not get stuck on the wrong side of the arch with nowhere to go! 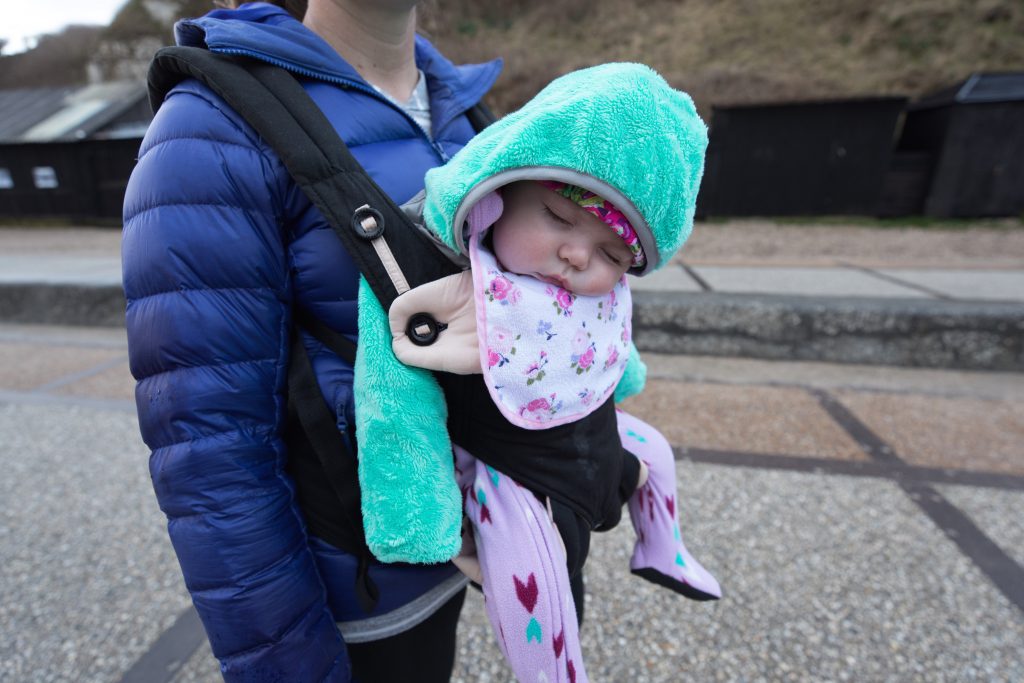 Instead, we located the well-trodden path that led to the top of the sea arch. Since sunset was fast approaching, we were the only people willing to brave the chilly temps as the sun dipped below the horizon. Fortunately, the rain ceased as darkness began to fall, almost as if Mother Nature was rewarding us for our patience. The weather cleared and we were treated to an ethereal sunset that bathed the deserted beach and white cliffs in a pink tinge, just soft enough to remind you that such a color existed.

If Honfleur was like a town from Beauty and the Beast, Mont Saint-Michel was the castle from Sleeping Beauty. 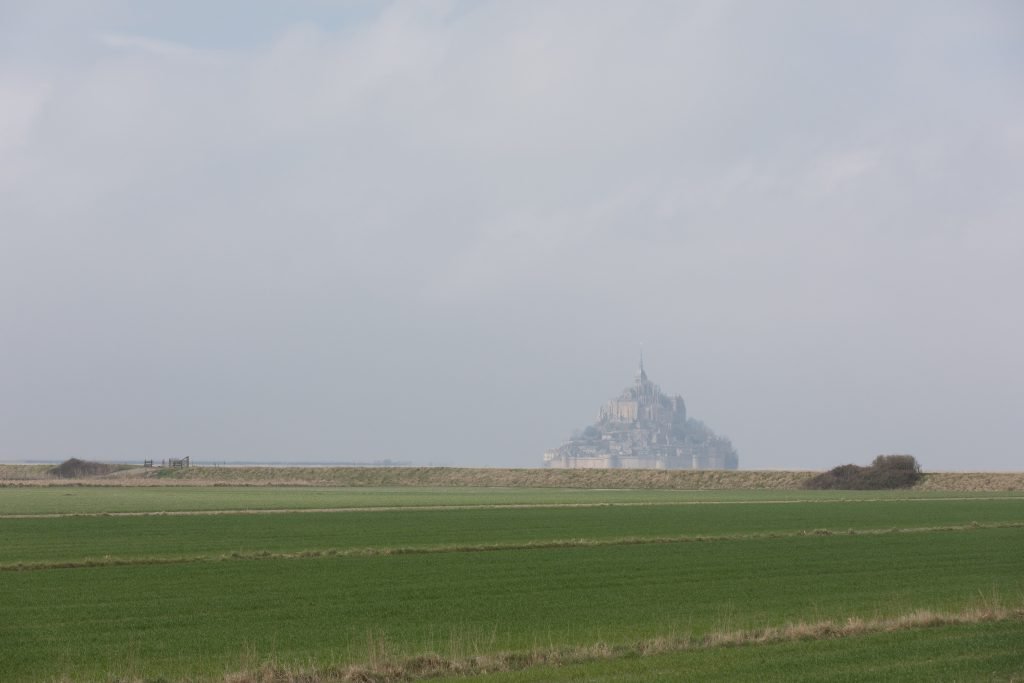 To be fair, it’s not a castle in the true sense of the word. Rather, it’s more like an island commune, completely segregated from the mainland when the tide rolls into shore. It is located 2000 feet into the ocean which meant it was close enough for peasants to walk to the abbey during low tide. But, during high tide, it was easily defensible. In fact, the island’s claim to fame is that it remained unconquered during the Hundred Years War. 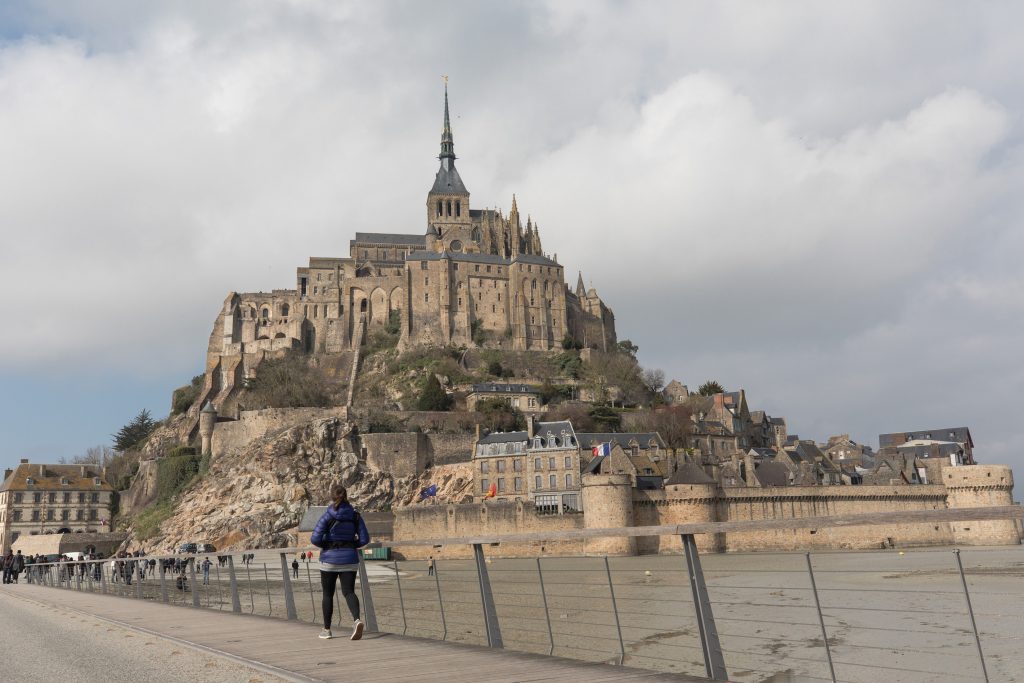 A monastery sits atop the island, exemplifying the feudal society of the day: God in the middle, then the great halls below that followed by the storage areas below that, and finally, at the very bottom outside of the walls, houses for the fishermen and farmers.

Nowadays, you park in a parking lot on the mainland and catch a free bus or walk over the bridge that spans that ocean gap out to the island. Walking through the main gate felt like walking back into medieval times. A stone street climbed the hill with tiny shops on each side. At present, the buildings are filled with creperies and souvenir stores, but I could easily envision royalty and shop keeps from days gone by. We climbed all the way to the top in order to snag a view of the mainland, and I delighted in hearing the church bells toll as we looked out on France. 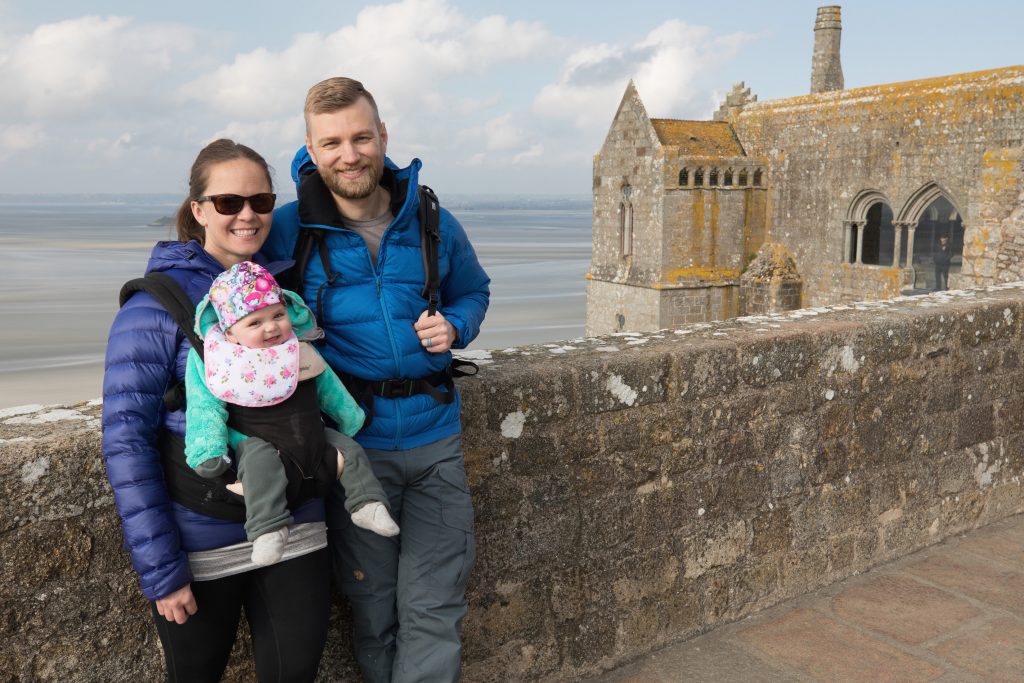