Gates of the Arctic: Packrafting the Alatna River & A Grizzly

After recovering our packrafts and carrying them back to the river, we made an executive decision that would haunt us for days: we decided not to paddle that day and instead, set up camp, explore the area, eat dinner and enjoy the sunshine. Sounds beautiful but in retrospect, it was a stupid plan! 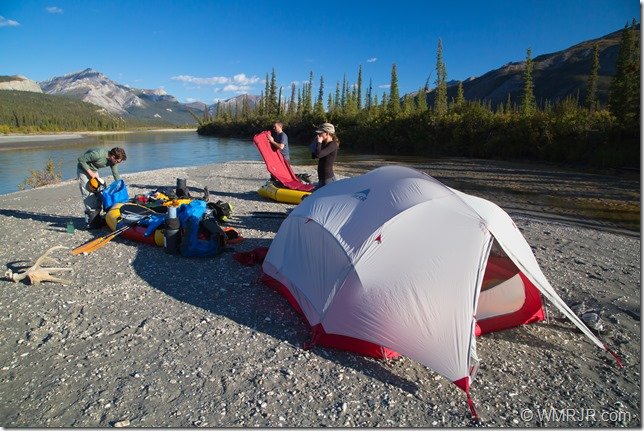 As we would for the rest of the trip, we established our camp on an exposed rocky gravel bar on the side of the Alatna. Since the Arctic tundra is comprised of thick, dense shrubs, there aren’t any clearings that allow for tents. Additionally, we didn’t want to be huddled down in shrubbery that would obstruct our line of sight. If a grizzly is heading my way, I want to see it coming for as long as possible! 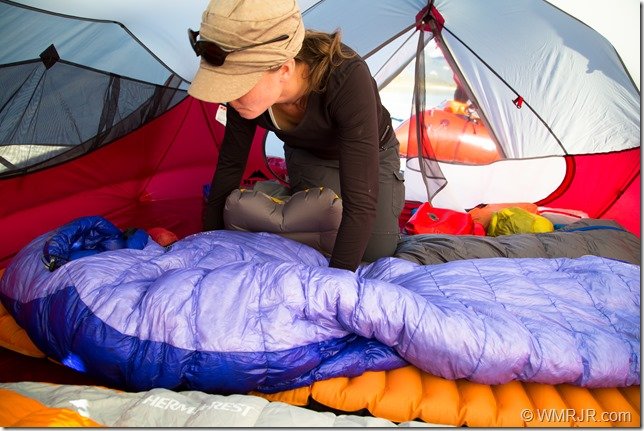 Before leaving Bettles, we had talked with a woman in the Brooks Aviation office who told us that the aurora borealis had been off the hook that week. She said it was coming in clear every night and that it was even showing lots of super uncommon red colors. After hearing that, we were beyond excited. Could we possibly see an aurora borealis?! (Unrelated side not: added this to my must-do list. Scroll down and check out the igloos!)

However, we had a snag: it was freaking cold outside! Sure, the temps hadn’t dropped as low as they would later in the week, but it was still in the mid-30s at night; not really weather to sit around and stare at the sky! Luckily, Will came up with an ingenious plan: 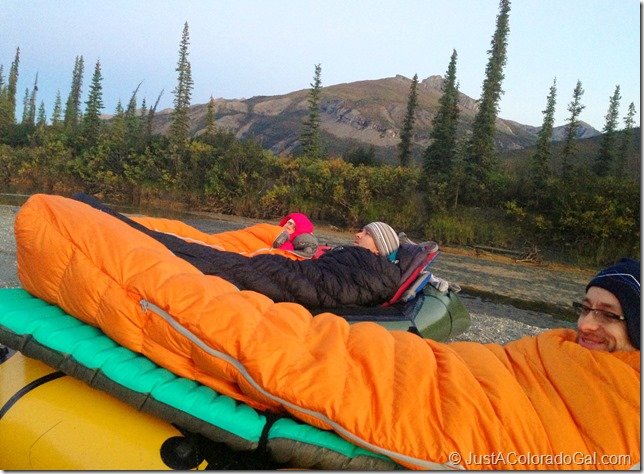 Seriously, this was 10pm 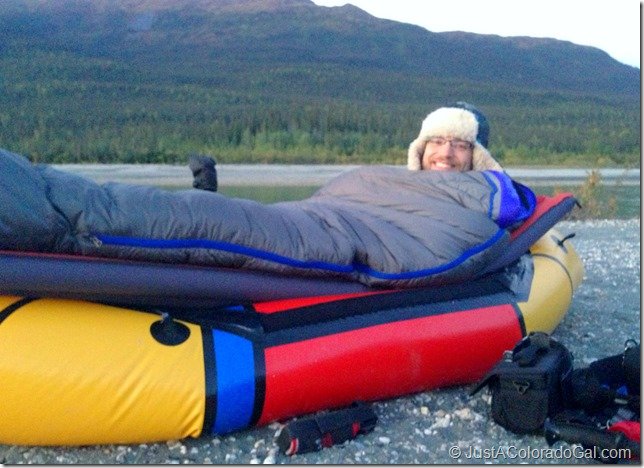 Welcome to our “northern lights viewing party!” We all put our sleeping pads and bags on top of our packrafts and settled in for the show, nice and toasty! Honestly, I have no idea how long we sat out there, watching the sky, but it was long enough for each one of us to completely pass out! I woke up near midnight to find frost on my sleeping bag and zero northern lights in the sky. I headed into the tent and everyone else quickly followed. Sigh. No northern lights but still—how often can you say that you fell asleep under the open sky of the Arctic Circle?

Monday dawned sunny and bright, but there were quite a few clouds on the horizon. We decided to see what the Alatna had in store for us so we retrieved our bear canisters from down the beach, ate our Backpacker’s Pantry breakfasts and drank our coffee, and packed up camp. 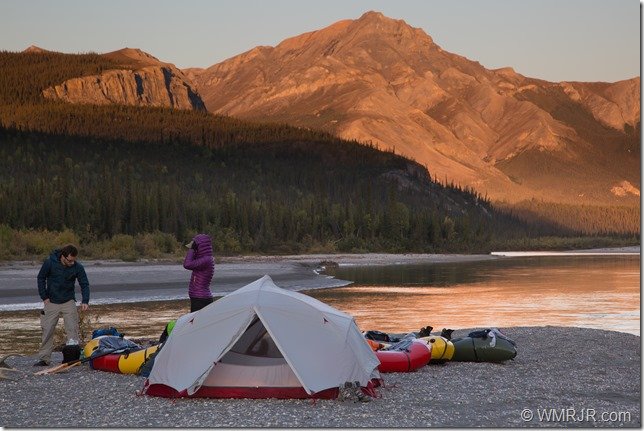 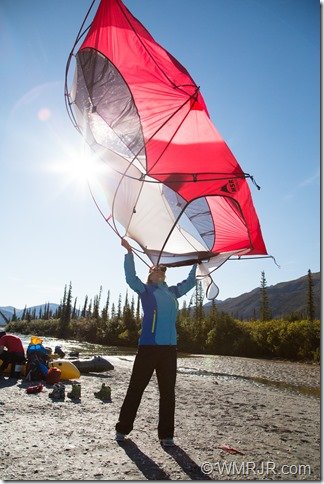 Once the sundries were sorted, it was time to hit the river!

We had initially looked at the Alatna and spoken the infamous words that would ring in our ears for the rest of the trip: “Look at the current! We’ll barely have to paddle; we’ll just steer!” Unfortunately, someone must’ve been on crack when he said that because as soon as we hit the water, we realized it was going to take a lot of work! Packrafts are incredibly light, the water level was low with minimal current, and head winds were strong. In short, we had 60 miles of river to travel and we were going to need to paddle every single inch of it! 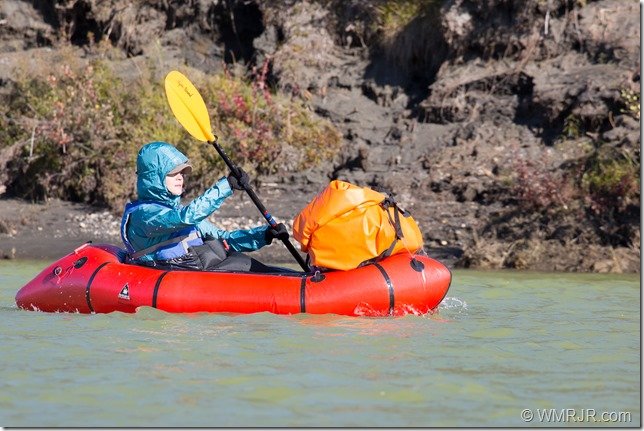 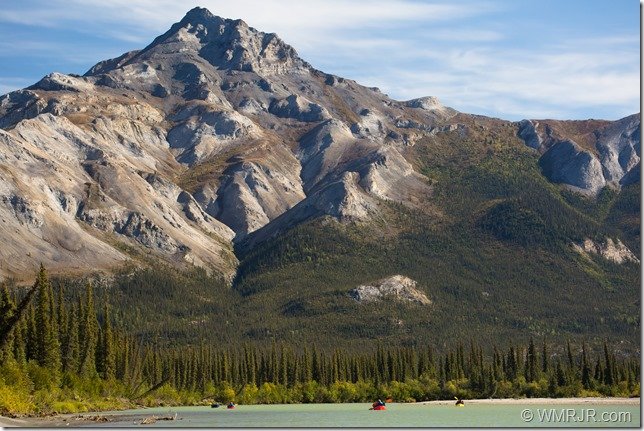 We spent the morning paddling and battling some headwinds, as well as getting a feel for the river. There were towering peaks surrounding us and we’d frequently take a few moments to quit paddling and float in silence. There was minimal wildlife that far north, so we’d frequently hear nothing other than the wind in the tundra.

We still didn’t pay too much attention to the map and decided to call it a day around 5pm. Since we’d put in at 11am and stopped for an hour lunch, we weren’t exactly pushing it! However, we saw a sandy embankment that looked perfect for second campsite of the trip, so we figured we would give it a try. Little did we know that it would lead to our single bear encounter on the trip!

The night went similar to the last although the temps were a bit colder and Amy and I both slept chilled. The clouds had settled in, so Will awoke first to a gray and overcast morning. He decided to head down the beach to our bear canisters so that the rest of us would have everything ready when we got out of the tents. Amy and I were still in our MSR tent chatting, while Drew and Shannon dozed in their Fjallraven. Mid-conversation, Amy and I heard, thump-THUMP-thump-THUMP, SPLASH!

Naturally, we looked at each other, wide eyed. What in the hell was that?!

Thankfully, he was fine, and responded with, “Holy shit! You guys, that was a grizzly!”

Luckily for Will, the bear freaked out when he realized he wasn’t alone and turned and sprinted away from Will—and towards camp. Will stood helplessly as the grizzly sprinted towards our tents, but breathed a sigh of relief when Mr. Grizz gradually turned, ran up and around the embankment, cannon balled into a small pond, and disappeared into the tundra. Check out those paw prints! 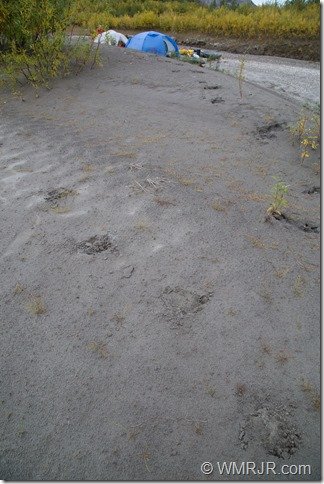 We were all incredibly happy that the bear was terrified of us instead of the opposite. That situation could have gone much different!

What’s the biggest animal you’ve seen in the wild?

And Then The Rains Came: Gates of the Arctic National Park