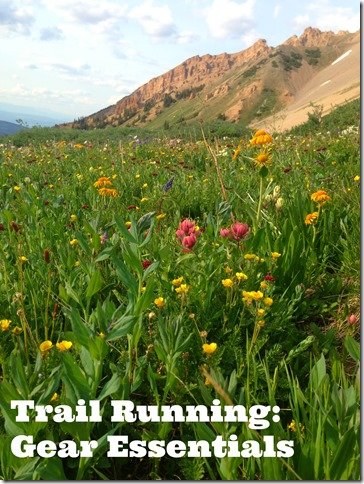 A few months ago, I stumbled on a blog post that recapped the Moab Trail Marathon. Through the writer’s photos, the race looked so darn exciting that I couldn’t contain myself: I registered for the half marathon within a week!

{Especially after watching some of these videos. Do you SEE that scenery?!}

But, here’s the deal: I don’t like running races alone and truthfully, my running over the past few years has been anything but stellar. So, I put out a call to…well, anyone who would listen! Real life best friends, Facebook friends, workout buddies at CrossFit; you name him, I told him about the race! I really was hoping for at least one person to accompany me to Utah!

And guess what? I got it! To the best of my knowledge, almost a dozen friends have signed up for the half marathon! Some are experienced runners and others haven’t done any trail time in their lives. That’s where this post comes in!

A bunch of them have asked me for gear recommendations, and I thought it was something that others could use as well. Trails tend to make new runners nervous, and having decent gear can definitely help assuage those fears. Also, trail running has become one of my gear-testing niches over the past six months, so I’ve put dozens of items through the testing ringer. Here are some of my favorites! 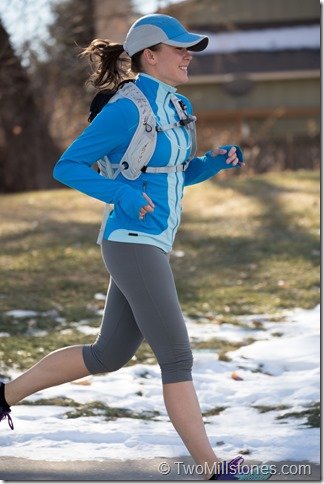 Why: There are a zillion ways to carry water while running {handheld, water bottle, pack, waist belt, donkey, whatever}, but it really isn’t necessary if you’re not going for some legit miles. However, if you’re running a half, you’ll need some agua! Additionally, there typically aren’t bathrooms or water fountains on trails, so you need to carry your own hydration, and backpacks are definitely the method du jour of the trail running world!

What: New for Spring, 2014, Osprey’s Rev series is officially my favorite hydration pack for trails {and that is saying something considering I’ve tested a half dozen in an as many months!}

I think Osprey has backpacks dialed in from their many years as a backpacking company. However, I was unsure if they would be able to translate that success to trail packs. I own the Rev 24 and it is the perfect size for the bladder of water, fuel, and any additional clothes that I want to bring. My favorite feature is how it fits: it honestly wears like a t-shirt instead of a backpack!

Truthfully, I could go on and on about the Rev Series, but that would be silly since I already did that! Check out my review over on TrekTech to read all of the gory, Rev-related details. 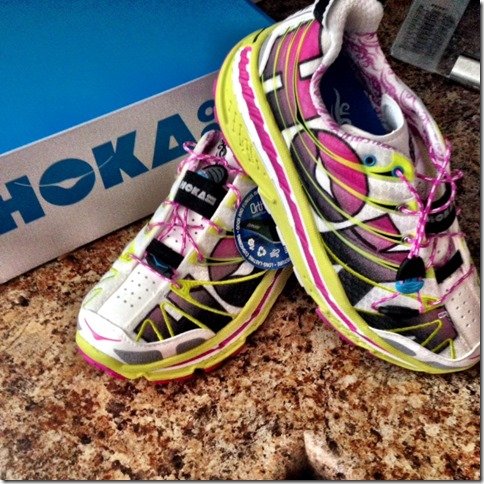 Why: If you’re just heading out for two or three miles, you can likely get away with your road running shoes. However, you will definitely need trail shoes for longer distances. Not only are trail shoes more durable, but they typically sport a lot more traction to keep you from eating it on the rocks.

What: This is tricky because truly, shoes are a personal preference! In this regard, I can only detail my personal experiences and hope they help!

Over the past year, I have tested the following trail shoes: Merrell Mix Master Glides, New Balance Minimus Zero v2, New Balance Fresh Foam 980, Salomon Sense Mantra, Hoka Stinson Trails, Brooks Pure Grit, and the Mizuno Wave Kazan. Of those, I am hands-down, in love with the Hoka Stinsons.

Yes, they look like moon shoes and you will likely be laughed at in public. But, I can’t help it; those shoes are like running on clouds! For the first time, I find myself saying that my shoes are making my runs easier, and I look forward to running in these more than any other shoes.

Are they for everyone? Probably not. I know Heidi told me that she feels like she is running in high heels when she wears them, so there is that!

Why: Because you can’t run naked. Not only is it probably frowned upon, but I’m guessing you’ll get mad sunburned.

What: Running clothes truly aren’t that different from other workout clothes and I get really irritated when companies insist that they are. I have tons of CrossFit gear by Reebok that works great on the trails, and conversely, often wear my fave Brooks running shorts to Big Horn for the WODs.

However, I would advise anyone to pay attention to the fabric of their clothing. While running {or walking, as the case may be} for hours, you’re going to sweat. And if you’re running a half marathon in Moab, you’re really going to sweat in that sun! In these instances, cotton is a freaking nightmare. Not only does it not wick-away sweat from your body, but it doesn’t dry quickly. If you sweat through the back of your cotton shirt while wearing a hydration pack, there is a good chance that you will stay wet for the remained for your run. 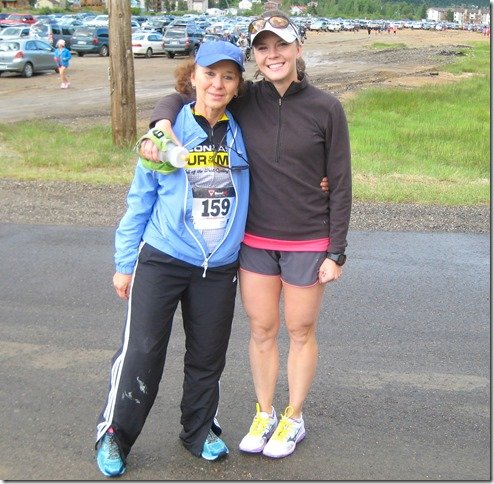 Mom and me at the half marathon last weekend; I’m wearing the Brooks D’Lite shorts

Instead, look for synthetic materials. They will smell more and you will definitely need to wash them if you want to keep your friends, but I promise that it is worth it. Some of my favorites include: Brooks D’Lite Low Rise Shorts {reviewed here}, Reebok Running Essential tank, and the Zoot Ultra Run 2-in-1 running skirt.

{And yes, I swear it’s cool to wear a running skirt…..in my world anyway}

Additionally, don’t forget to consider a hat and your socks. I prefer a visor but really, anything that blocks your face from the sun will work. {I like the Columbia OmniFreeze Coolhead visor}. Also, socks! I’m still a big fan of Injinji and won’t run long without them. Since I have bunions, my big toe smashes into the side of my second toe, causing major blistering after five or six miles. Having little toe pockets prevents that problem, and I’ve never experienced a single blister in my Injinjis.

Why: Because chafing is miserable.

What: Body Glide! For those of you unfamiliar, Body Glide is an anti-chafing product that you rub onto your skin pre-run. In doing so, you prevent your skin from rubbing raw in random areas. I tend to chafe underneath my right arm {yes, only my right arm!} but I’ve heard horror stories of men chafing on their nipples from loose t-shirts and girls chafing underneath their sports bra.

Chafing is seriously miserable and can absolutely ruin a run. One stick of Body Glide lasts forever, so it is totally worth the investment!

Experienced runners—what else would you add?

Mother-Daughter Bonding: The Slacker Half Marathon