Heading into Gates of the Arctic National Park

Take a sec today to hug your loved ones and thank those who protect our beautiful country. Twelve years later and I still remember. Never forget.

You can read part one here.

As I stood shivering in the airstrip at pump station five, my heart was pounding. Aside from a tiny plane used to see the Nazca lines in Peru, I had never been in a bush plane. However, I don’t think it was nerves that were getting to me; instead, I was just psyched to get moving! 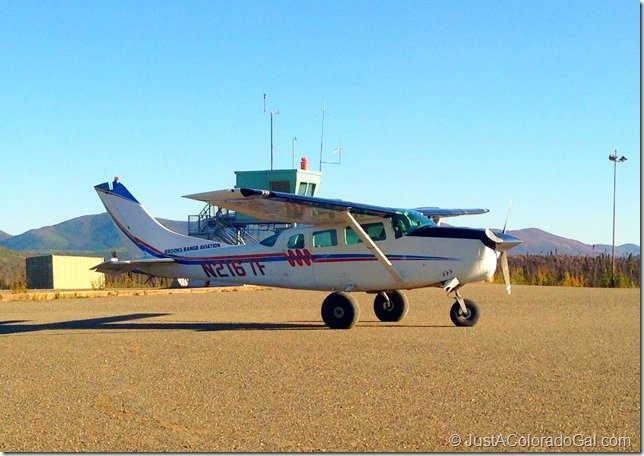 Shannon, Drew, and Amy packed up the first plane (since we needed to take two to Bettles) and Will and I waited for the second. Ever the gentleman, Will let me sit in the front seat so that I had a first-class view of the terrain we were flying over. The pilot did a quick safety chat before climbing into his seat and handing me headphones to wear. Not to be a total dork, but I thought the headphones were so cool! I felt like Top Gun or something….kind of. 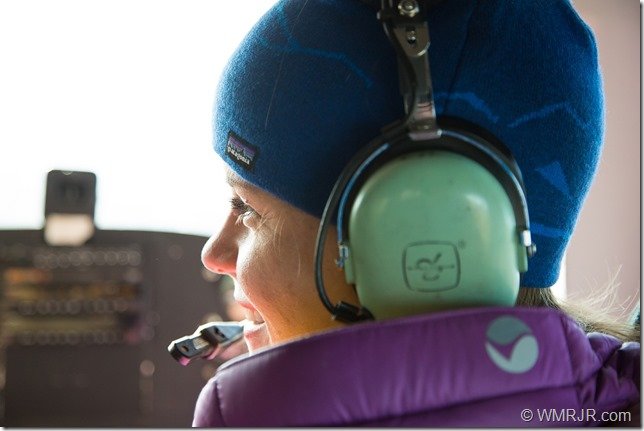 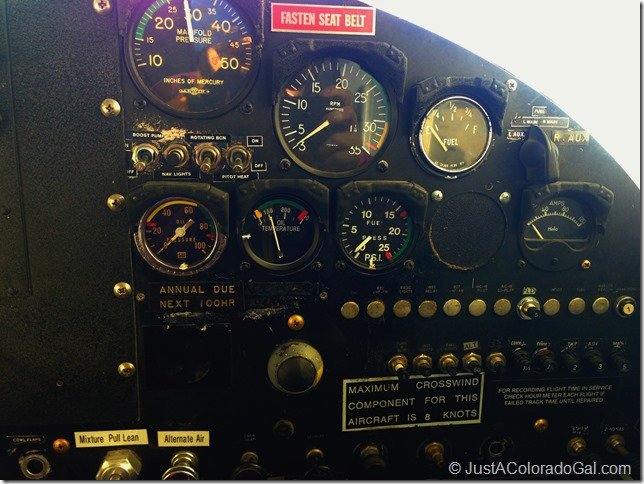 Our tiny plane took off easily and before we knew it, we were hundreds of feet in the air, watching the colorful tundra fly by below us. I kept my eyes peeled for wildlife, but alas, I had no luck. I did notice that the colors were already changing as fall had already begun to arrive; reds, yellows and oranges tinted the tundra and the ground looked like an oversized patchwork quilt. 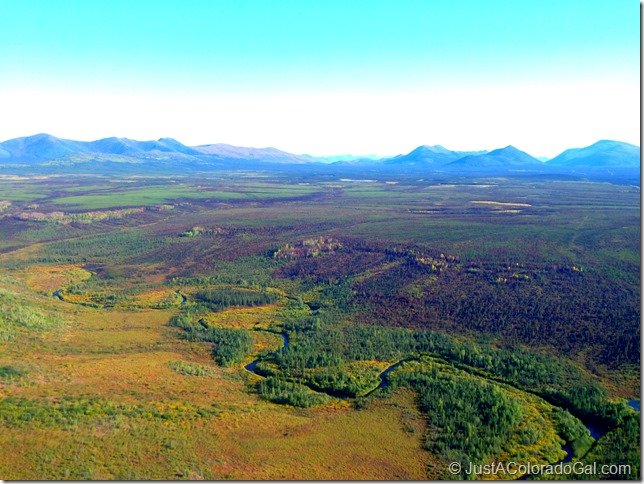 This first flight was no more than 20 minutes so it wasn’t very long until we saw another gravel strip with a few building spread out alongside of it. We had reached Bettles!

After a surprisingly smooth landing (serious, props to Brooks Aviation!) we eased up in front of their main building and parked. We found the other three and were immediately asked to step on a scale, with all of our gear on our back. It was do or die time in terms of whether we were light enough to fit in one plane. Luckily, we came in 20 pounds underweight so not only could we fit in one plane, but it would cost us each $600. Lots of money, of course, but it was the absolute lowest cost on the spectrum we had been quoted months ago. YES! 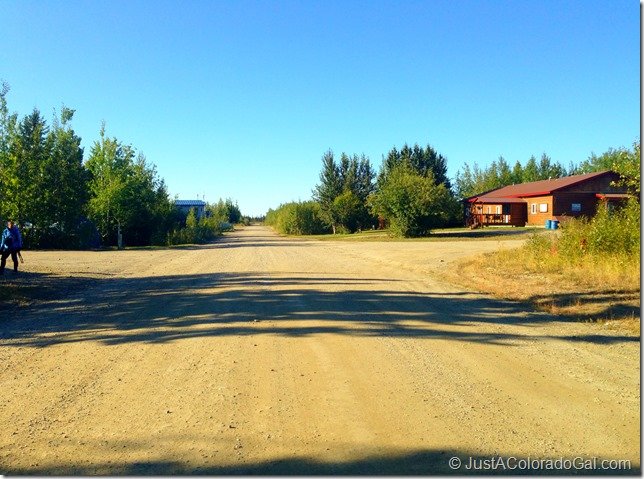 We spent the next hour renting bear spray, checking in with the NPS office so they had our itinerary, and stuffing our bear canisters with all of our toiletries and food. After we had everything (finally) sorted, we loaded all of the gear in the back of an old and rusty pickup truck that would act as our transportation to the lake. We were taking a float plane into Circle Lake, so we obviously had to takeoff on water too! 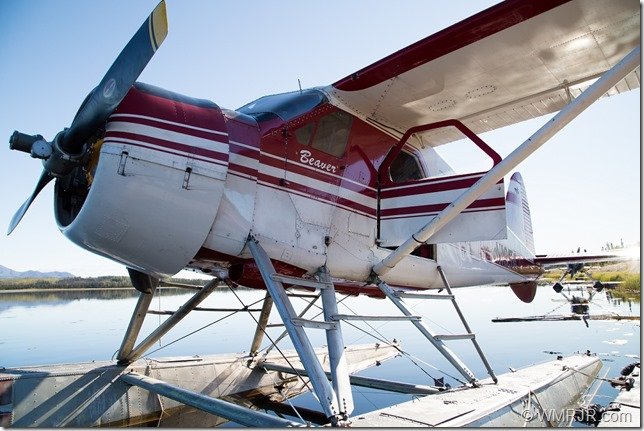 Our float plane was a Beaver, and it looked shiny and new in the sunlight. As we cruised across the pond I was shocked to realize how smooth those suckers are! We took off with nary a bump and while logical, I hadn’t realized how much extra cushion the water would provide for takeoffs and landings. Before we knew it, our plane was in the air and we were zooming off into the park!

The second flight was substantially longer and we were flying for an hour. Huge peaks towered on the horizon and I knew were getting closer to the Brooks Range. In the scheme of things, I had no idea where Circle Lake was, but I knew it was near the Arrigetch Peaks. Sure enough, our pilot started to descend and I caught my first glimpse of water below us. We had all imagined a massive lake, so I was surprised to see that were landing in 30” of water. Seriously y’all—these bush pilots have skills! 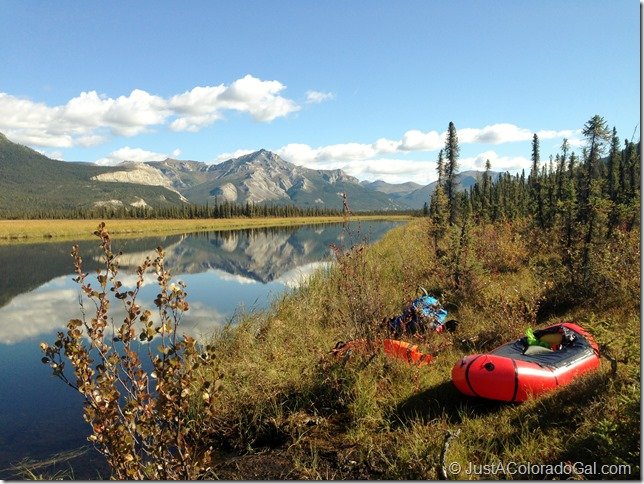 Our gear unloaded, we all stood on shore and watched our pilot fly in the opposite direction. The five of us were eerily quiet as the plane disappeared behind the trees; I think we all experienced the same feeling of solitude at that same moment. There was nothing for hundreds of mile. We had each other….and quite a few grizzlies!

Before leaving Bettles, our pilot had walked us through the brief portage that would allow us to get from Circle Lake to the Alatna River. His infamous last words to us were, “It should only take 10-15 minutes…if you know where you’re going.” How bad could it be, right?! 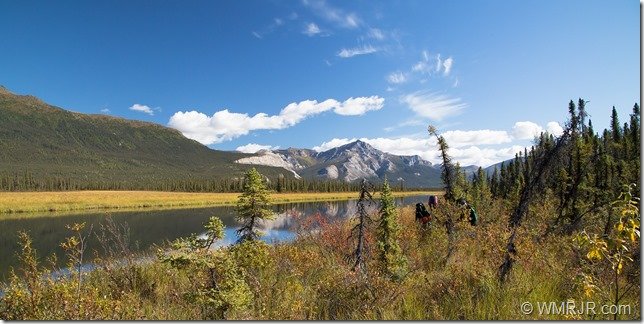 Immediately, Amy suggested we inflate the packrafts, paddle to the other side of the lake, and trek through the woods to the Alatna. No one else really wanted to deal with inflating the rafts (#lazy), so we spent an embarrassing amount of time trying to circumnavigate the boats by hiking around Circle Lake. After 30 minutes, we had traveled a mere 100 yards and were realizing how wild the Arctic Circle truly was. There were no trails and the brush was dense; additionally, the ground was like hundreds of furry soccer balls, peeking their heads up on occasion. It all looked stable but a clump would give way at any time and you’d sink into the marsh. Finally, we scrapped the initial plan and listened to Amy: we inflated the rafts and paddled east.

Once we reached the opposite bank of the lake, we had a decision to make. We knew the Alatna was somewhere in that direction, but we couldn’t see it. Initially, we sent Will and Amy ahead, all while yelling, “Hey Bear!”, to scout it out. We heard their confident shout within a few minutes. They had found the Alatna!

However, Drew reached the body of water next and I laughed when I heard his questioning response to Will: “So, since it’s a river, shouldn’t it be….moving?” Turns out, Amy and Will had spotted one of the many small ponds littering the topography. It wasn’t the Alatna, and we still hadn’t found our main source of transportation for the week. Four of us, excluding Will, had chosen to leave our rafts at the takeout point so we were just carrying our packs. Will, however, was carrying both his pack on his back and his raft on his head. His logic was on point: once we finally found the river, he’d stay with our stuff while the rest of us traipsed back to get our rafts. This way, bears were less likely to become interested in our goods. 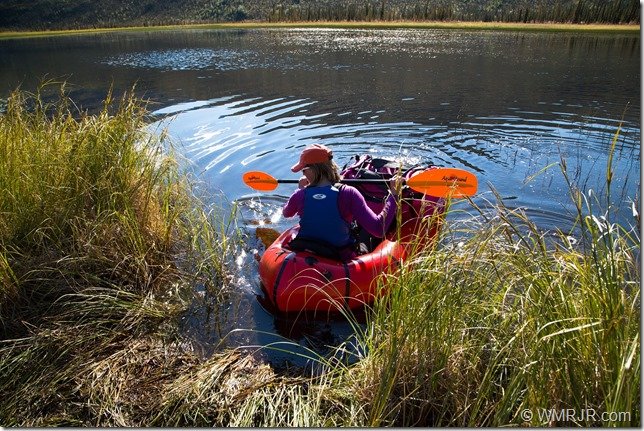 Unfortunately, our plan was contingent upon us finding the river, and our “10 minute portage” was well over an hour! We smartly hung Drew’s life vest on a tree branch as we approached a meadow: it would be our marker on the return trip so that we would know where to locate our rafts. We set across the meadow, feeling confident, until Shannon sunk up to his hip in an unseen marsh. Until this point, we had mistakenly thought we could stay dry, so his sopping wet pant leg was not ideal. We turned around to retrace our footsteps and realized that our brilliant plan of leaving the life vest was failing: the deep red color of the PFD blended nicely with the autumn color in the trees. Oops!

We tromped through the woods, causing a ruckus and generally speaking louder than we usual would. The shrubs were the perfect hiding spot for grizzlies and none of us wanted to round a corner and find a big brown beast staring back at us! Fortunately, we never found a grizzly, but we were happy to hear Will scrambling down a river bank: we had found the Alatna!

We quickly dropped our packs on a gravel bar and left Will to the task of filtering water while we returned for our rafts back at the lake. None of us had filtered water before our inexcusable two hour portage, so we were wicked thirsty. Amy and I laughed about our ridiculous afternoon, and we continued to wonder if we’d stumble upon Drew’s forgotten life vest. Luckily, we happened upon a clearing and spied a wonderful trifecta: the PFD, our rafts, and a moose drinking water on the opposite side of the lake: 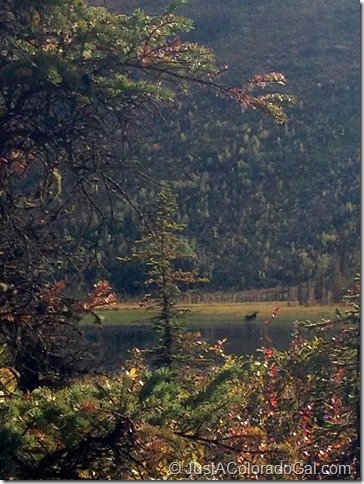 It wasn’t a bad way to end a chaotic afternoon, and I couldn’t wait to run back and tell Will that I had seen a moose!

Have you ever been lost in the woods? Or tried to hike without a trail?

Welcome to Alaska: Part One