The Heart of Ultrarunning: Jeremy Ebel 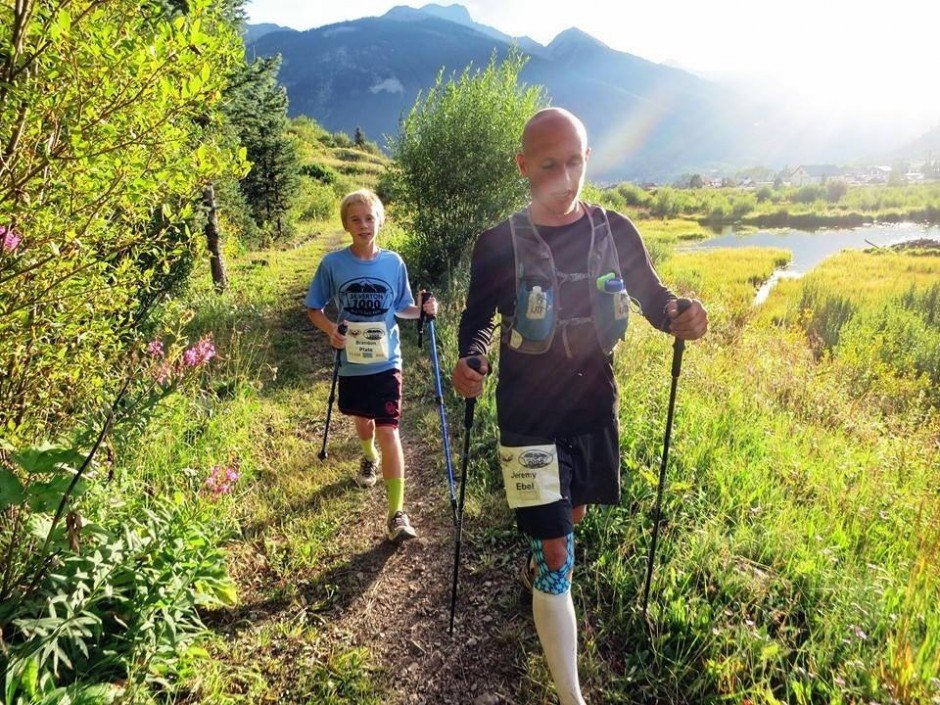 I met Jeremy while crewing at RRR100 back in September; he was the guy who paced Heidi for over 50 miles. Since then, we’ve followed each other on FB which is how I initially heard the following story. Truthfully, it was too good not to be shared! He told me his version of the story and entrusted me to convey it accurately; I sure hope I do it justice.

Jeremy Ebel’s first ultra race was the Leadville 100 in 2010. He finished with a time of 29 hours 27 minutes. His third 100 miler was the Boulder 100 where he finished second overall with a blazing fast time of 16 hours 15 minutes. And from what he told me up in Steamboat, he originally ran Leadville to shut up a friend who wouldn’t stop talking about running. Sure, he was an athlete prior to ultrarunning, but nothing crazy.

These days, Ebel is running multi-day races where the last man standing {or running, as the case may be} is the victor. The Silverton 1000 is one such race, and he competed in the 1000 mile challenge for the past two years. To date, no one has completed all 1000 miles, which I imagine is the appeal to Ebel. Regardless, he finished first in 2013 after running for six days and 350 miles. In 2014, he finished with 300 miles under his belt. Seriously! 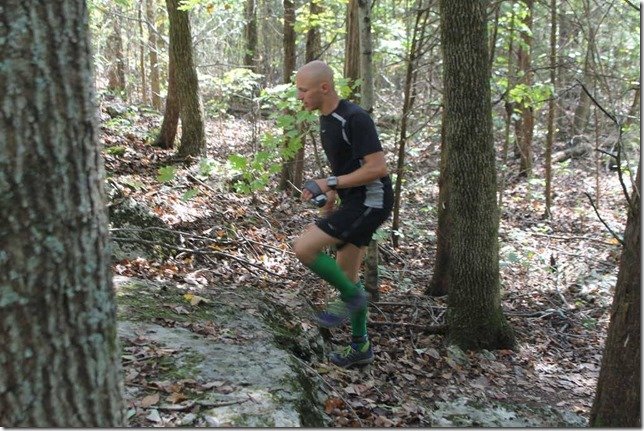 All Photos Thanks to Jeremy Ebel

The Big Backyard Ultra is another such race that took place in Tennessee a few weeks back on October 18. The concept was simple: the course was a 4.1666 miles loop. Runners are required to complete one loop per hour. They then can rest for the remainder of that hour, but need to be at the starting line for the horn when it announced the start of the following hours and the next loop. If runners aren’t back at the start or can’t keep running at the start of every hour, they are DNF’d from the race. Not only is the winner the runner who goes the farthest, but he is also the only finisher in the race!

After driving from Colorado and picking up his mother from Nashville, Ebel headed to Bell Buckle and geared up for his next race. On the morning of the 18th, all 40 runners toed the line, waiting for the start of the race. And at 7am, they were off!

Ebel heard varying reports about course conditions, so in the end, he decided to scope the course himself and rely on his own observations. Straight out of the gate was a quarter-mile descent and before he realized what was happening, the other runners took off. Ebel found himself at the back of the pack, struggling to reign himself in. However, he knew he had one hour to complete the first loop, which equated to a 14:15 pace per mile. And although he was straggling behind the others, Ebel knew he had to conserve his energy for later. After all, he was hoping to continue this pace for another few days! 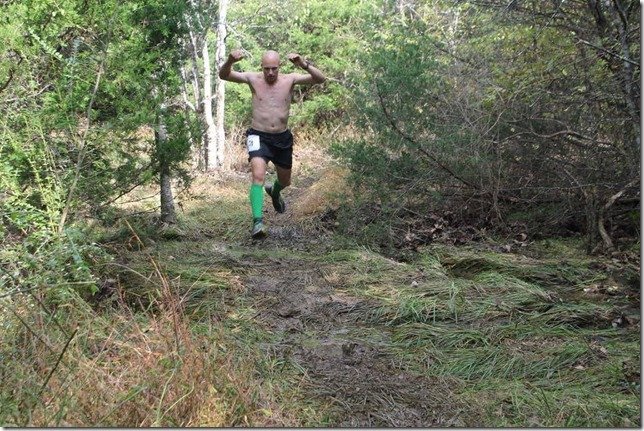 Halfway through the first loop, he encountered an individual known as “The Reaper.” The Reaper had the same strategy as Ebel and acquired this name because of it. If any runner fell behind him on the course, there was a good chance they were not finishing that loop! Ebel and The Reaper ran together for a couple loops that morning, and The Reaper filled him in on the strategy. He explained that he used certain landmarks for pace guidance to help him maintain his as-slow-as-possible pace. Ebel went with the same strategy, identifying his own landmarks on the course. Ebel knew he could last longer if he went as slow as possible, and these landmarks helped him maintain that creeping pace while still sneaking in each loop under the allotted hour.

After the first 12 hours, the course switched to the flat road course for runners to jog during the night. Ebel’s legs felt great and his spirits high. Sure, he was only 12 hours into his race, but things were feeling good! He used these solitary evening hours to do a little “sleep running” too. In essence, he would close his eyes for 20 or 30 seconds, nabbing brief moments of relaxation throughout the evening. He used this technique all night and greeted the rising sun feeling refreshed and ready for another day of running.

Upon sunrise, Ebel learned that nine runners were left, including two well-known guys: Joe Fejis and Johan Steene. Ebel felt fantastic and sharpened his mental game for the day. With two competitive runners in the mix, he knew there was a good chance that the race would surpass it’s previous record of 142 miles. 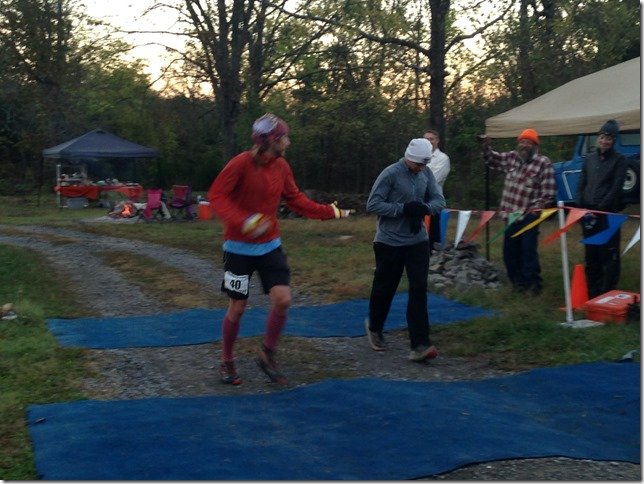 After running the first lap with Fejis, Ebel spent the remainder of the second day solo. His legs were responding well and he was happy with his performance thus far. As dusk drew near, he learned that Fejis would be dropping once the course switched to the evening paved miles. This gave Ebel another needed boost as he was nowhere near exhausted. Knowing that he had plenty of gas left in the tank, he welcomed the darkening hours with open arms.

And if you’re keeping track, he is now entering his second night of running, a full 36 hours after the beginning of the race!

Steene and Ebel ran together for a bit, joking and laughing with each other. As of hour 39, it was the two of them left in the race. Ebel shared his sleep running technique and the two of them teased about moving the starting mat and enjoying beers. The men were surprisingly upbeat considering they were approaching 48 hours of running. However, the nights are endless and the two of them parted ways, spending the rest of the dark hours running alone.

Around 1am, Ebel began hallucinating due to lack of sleep. This has happened in the past, so it was no surprise to him. In fact, he welcomes the entertaining faces and animals that appear to him in the bushes!

The sun crept over the horizon, marking the start of the third day. With the warm sunshine came the news that Steene was going to call it at 200 miles. However, it wasn’t because of exhaustion or physical capabilities. After the previous record of 142 miles, no one could have expected the race to continue this long. Steene had a flight to catch. He filled Ebel in and the two of them decided to run one last loop together so they could push the finishing mileage to 204 miles. Then, Steene would leave to catch his flight and Ebel would run a final lap so that he could be declared the official winner. 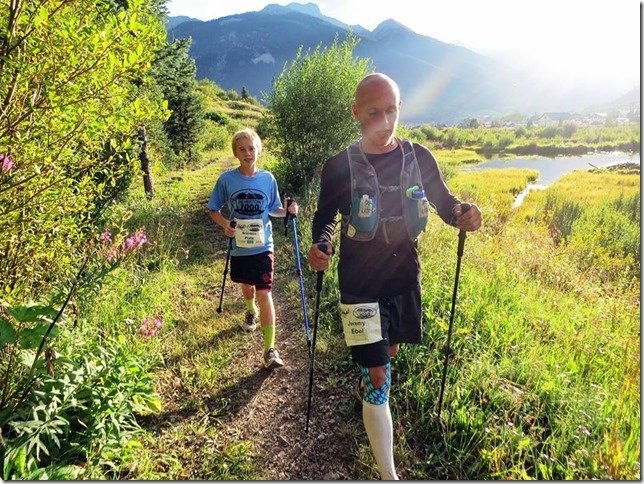 Ebel and Steene finished mile 204 together and congratulated each other. The countdown began for Ebel to run his final loop and the horn blew, signifying the start of the 50th hour.

But Ebel didn’t toe the starting line. In fact, he stepped back and never ran that final loop.

“I didn’t go,” he told me in explanation. “It wasn’t the right way to end a race like this. He {Steene} still had a lot left in the tank and so did I. Even if I made that last lap, I wouldn’t have won. Steene just had someplace he needed to be, so I just let the clock run down.”

These days, we hear so much about the competitive nature of athletes and so rarely do we catch a glimpse of the mind-boggling sportsmanship that still exists. Ebel is an athlete and damn good one at that. However, he clearly wasn’t interested in a “cheap” win. To me, that says more about his character than any number of first place finishes.

Until next time, Jeremy.

Five of the Best Hikes Near Denver