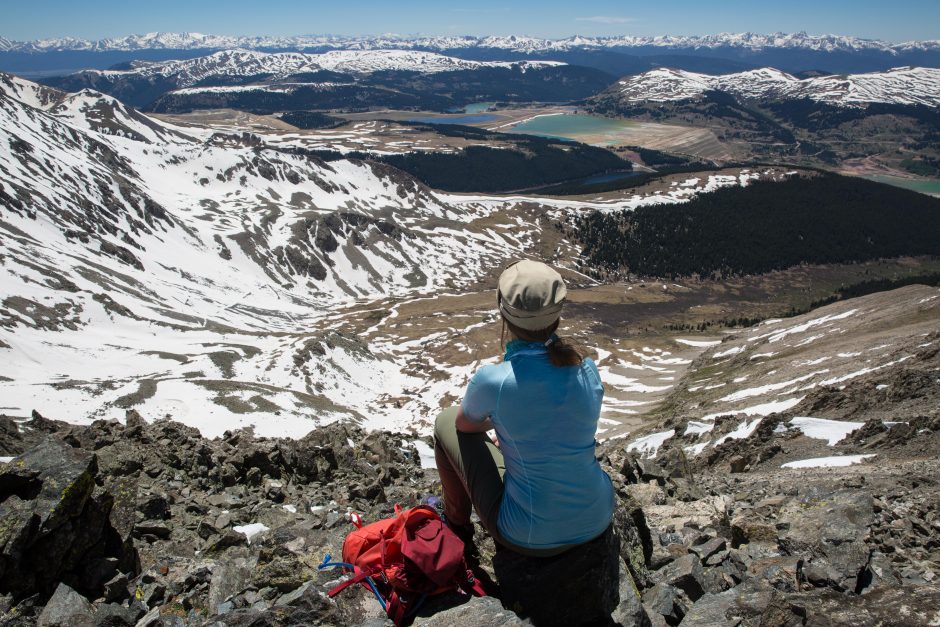 Also titled: That time I hiked Atlantic Peak and then fell down a mountain.

It all began when I pitched a story about Boston Mine, a ghost town located near Copper Mountain Ski Area. Will and I knew we needed to hike to the mine to check it out and snap some photos for the story, but there was still a wide-open day beyond that. If we were already in the middle of Mayflower Gulch, why stop hiking at the mine?!

And so it began. We corralled a couple of friends and hit the road on Friday night. Our planned schedule was to camp at the mine on Friday, get up early for an alpine start on Saturday morning, and knock off both the mine and Atlantic Peak by lunch time. 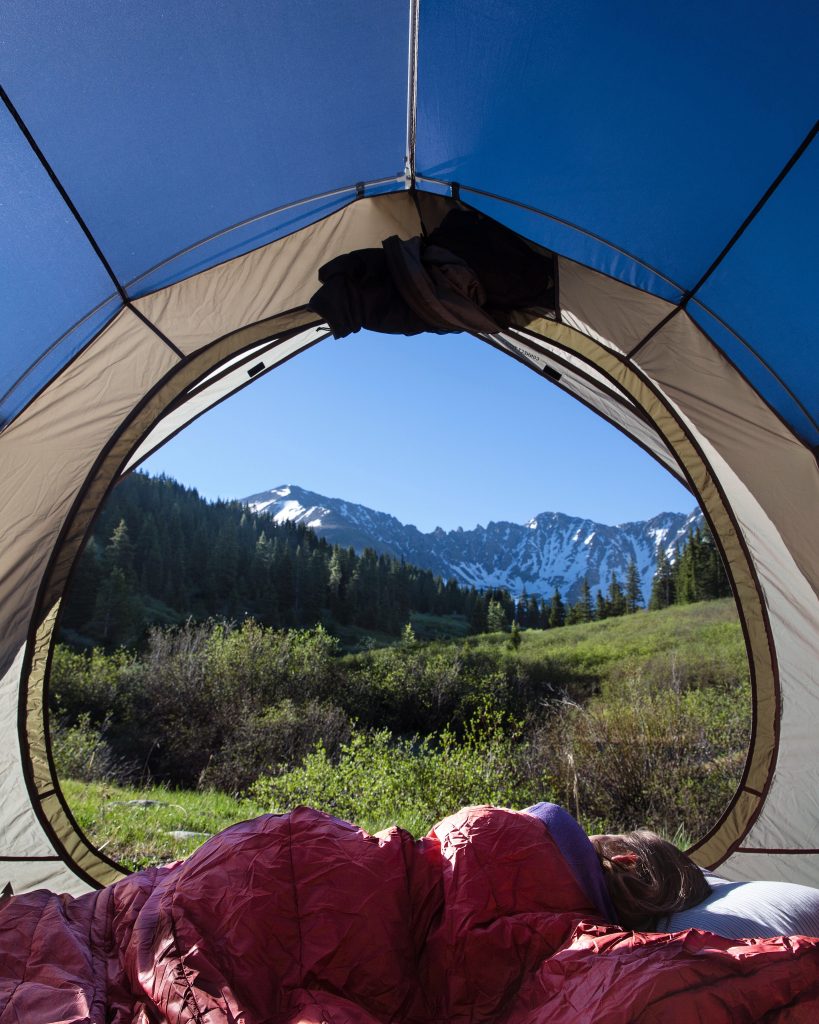 But what is that expression about the best laid plans being waylaid? Yeah, that.

The alpine start simply didn’t happen. The morning was too beautiful; the coffee too tasty; the views too scenic. We dawdled around camp until 9 am before finally motivating to hit the road. Thankfully, it was a stunner of a day with nary a cloud on the horizon; weather was definitely not going to be a problem. 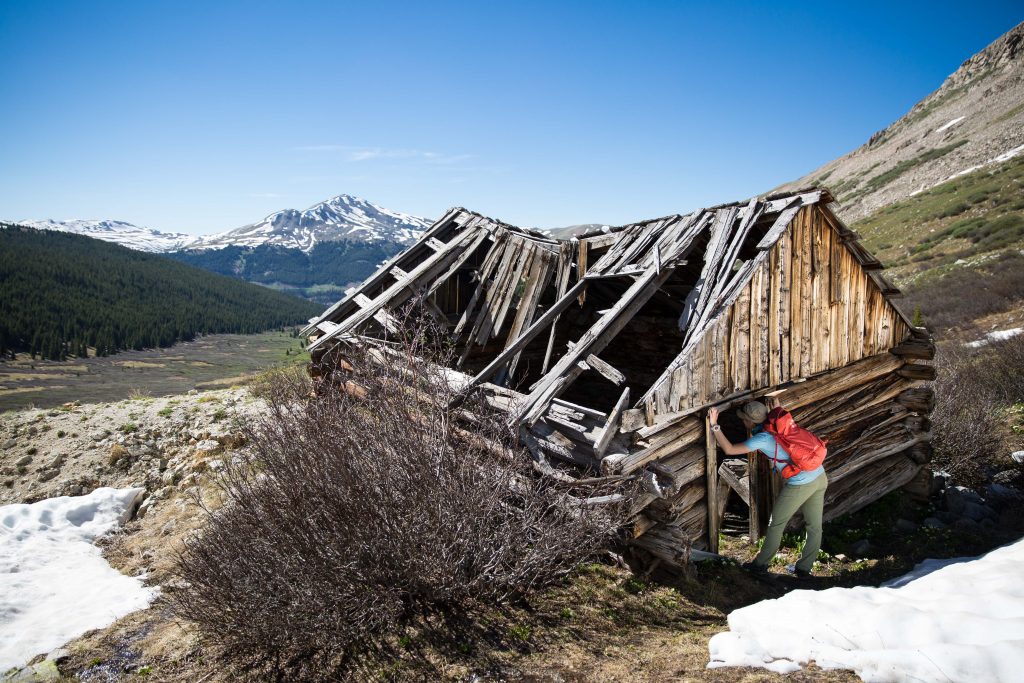 After investigating the mine {11,500 feet}, our motley group of four turned our eyes towards Atlantic Peak, one of the giants towering over the defunct village of Boston Mine. As it turns out, Atlantic Peak is a “centennial 13er,” or on the list of Colorado’s 100 tallest 13ers {mountains over 13,000 feet.} Apparently, it’s 13,841 feet….but I sure didn’t realize that at the time. I just thought it looked like a fun ridgeline!

From Boston Mine, we beelined it through the willows of the drainage and crossed the babbling water of Mayflower Creek. The water wasn’t that high but it was moving quickly; definitely didn’t want to fall in this early in the day! 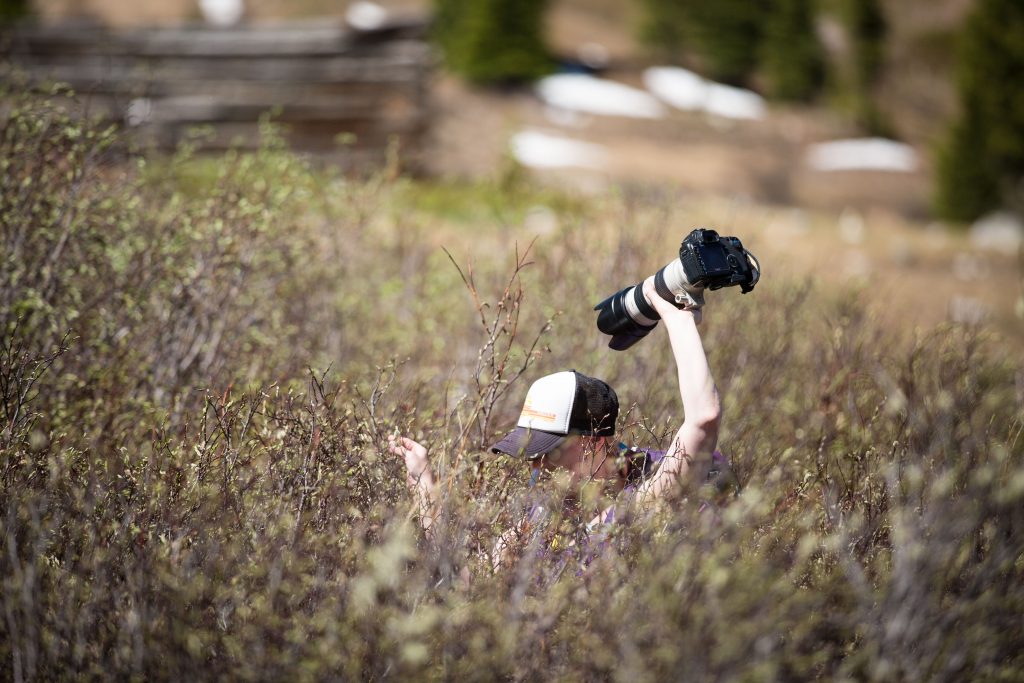 From there, we eyeballed the hillside in front of us. We’d read that there was a faint trail, but all we could find was a small game trail left by some eager goats or sheep. We stuck to their path for awhile, skirting up the mountain, but eventually we had to leave the game trail and head straight at the west ridge. We all scattered at this point, each of choosing a different route to tackle the steep slope up to the ridgeline. Will, Laura and Greg scattered around the grassy hillside while I chose to take the direct route up the talus field. 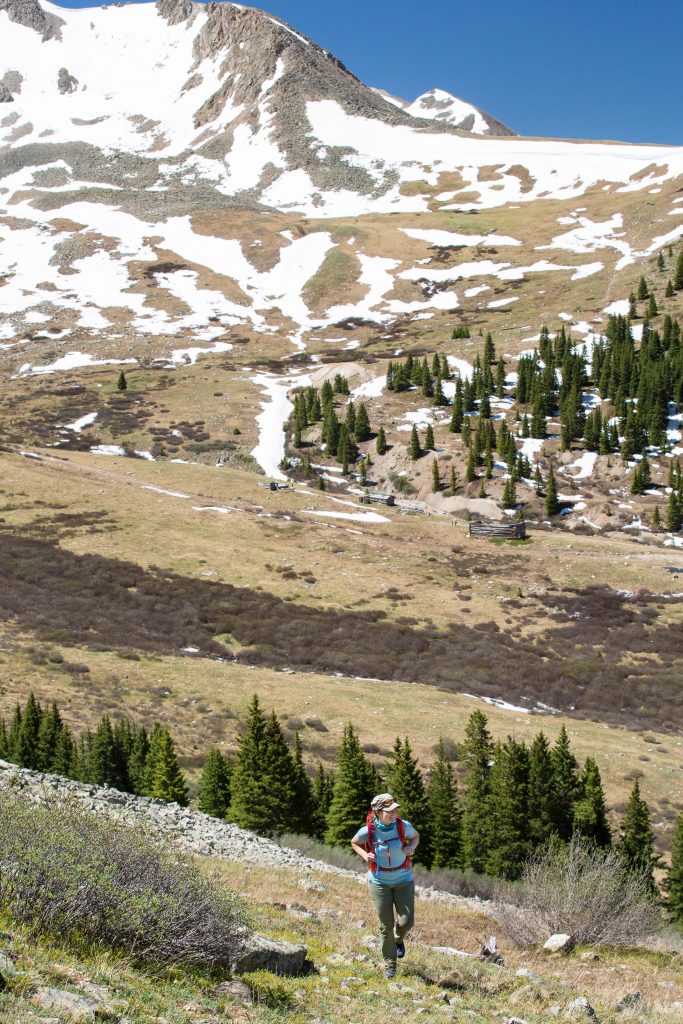 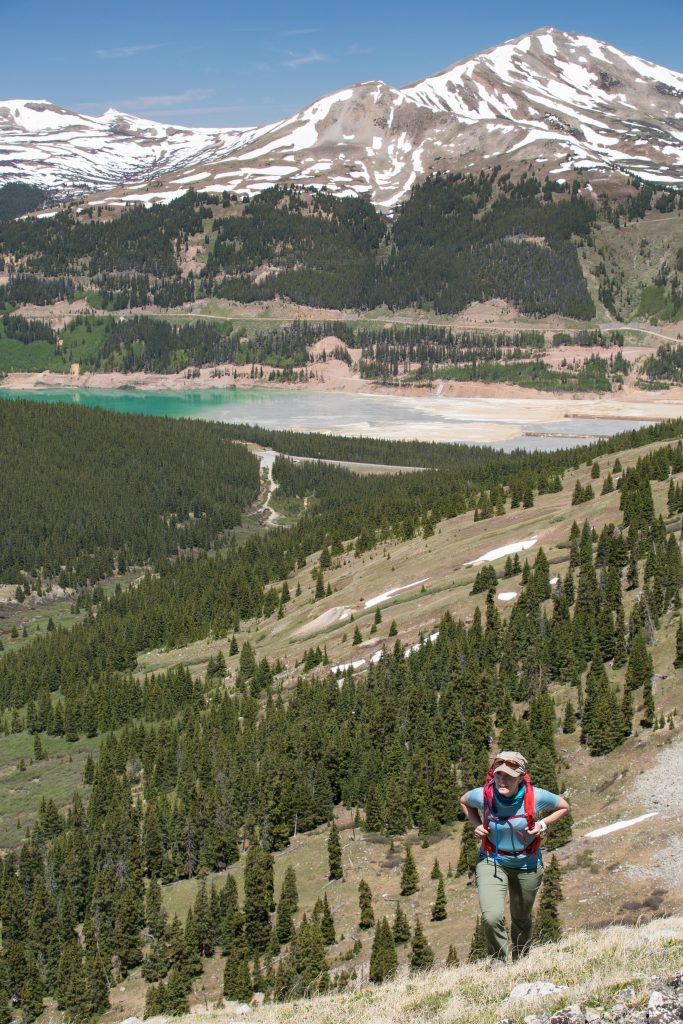 Once we gained the ridge, the going was fairly easy and straightforward. The talus is sturdy and solid the entire way, so it was a mellow jaunt up to the ridge crest. However, we did find a large pocket of snow around 13,000 feet that we just didn’t trust. It was entirely covering the ridgeline and one slip would’ve meant a questionable fall. Rather than mess with that, we down climbed a small section of rock and traversed underneath the snowfield. Finally, we regained the ridge via a quick scramble up a drainage. 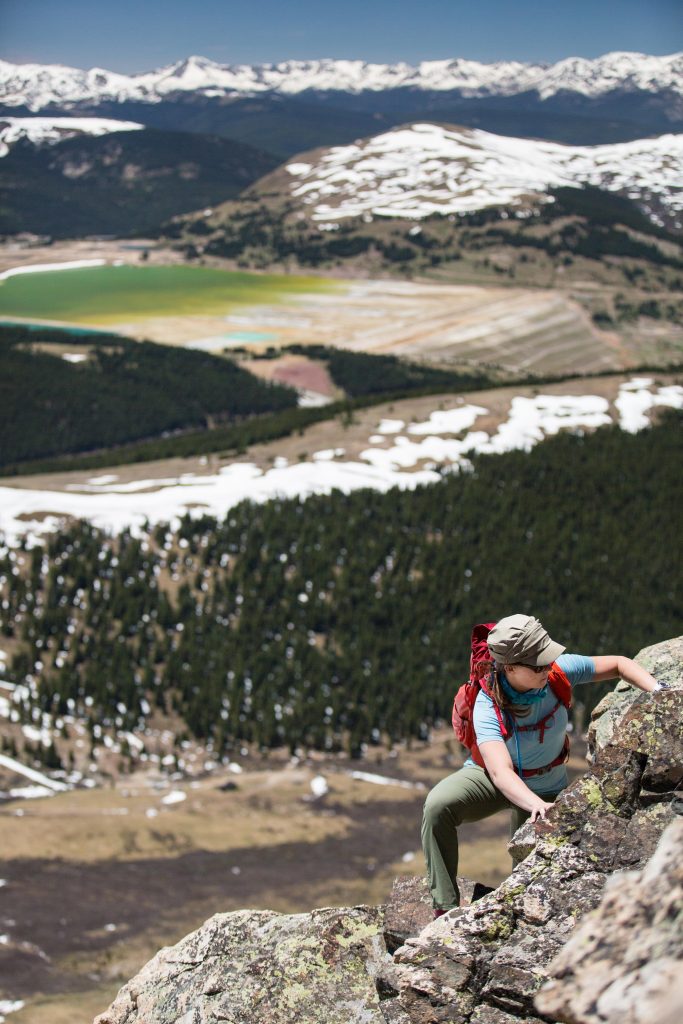 Hmmm…maybe today is the day I turn into a climber?

The views from the summit of Atlantic Peak were just as gorgeous as one would expect from that altitude. Laura is an accomplished figure skater and she has been working on a project where she skates a multitude of high alpine lakes {seriously, the photos are breathtaking!} While Will and I soaked in the views, she scouted a few lakes behind the peak…can’t wait to see what she does with those! 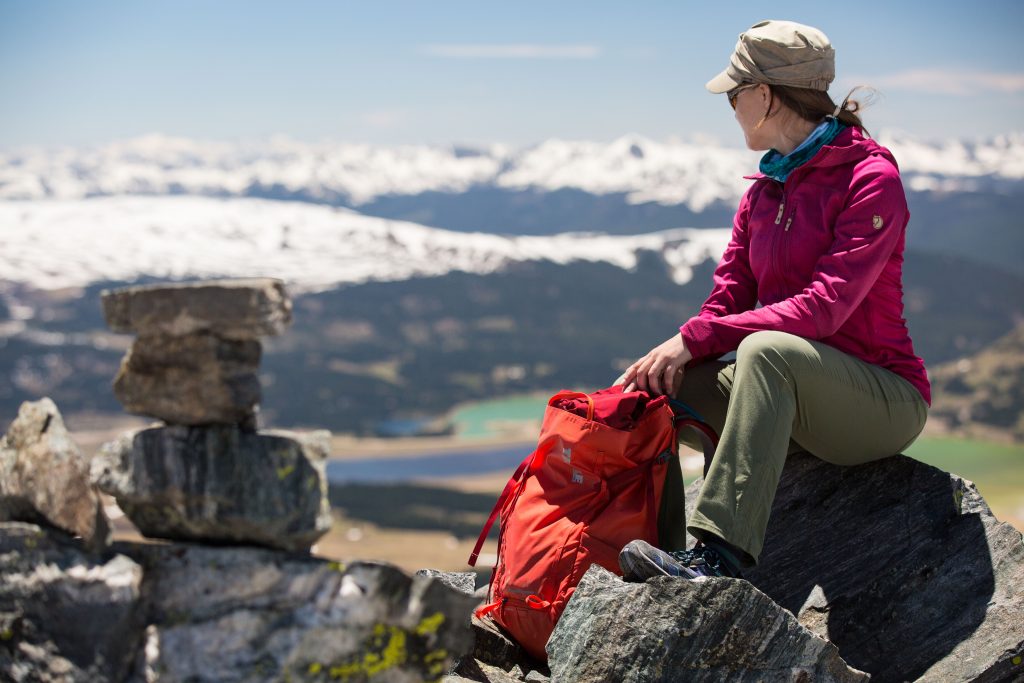 Did you know Thule makes backpacks now? Truth. Tested one on this trip!

After mashing some snacks in our mouths, we decided to high-tail it back to Boston Mine where our friend Greg was waiting for us. He had bailed earlier on, thanks to some horrendous blisters on his feet. Ever the gentleman, he offered to sleep in the meadow till we got back down. Knowing that, we wanted to be quick as possible on our descent….but you know what they say about descending a mountain, right?! It’s *always* the toughest part of any climb!

After hiking down the ridge, we made the questionable decision to descend via the same scree gully we had ascended while skirting the snowfield. Sure, it had loose talus and scree, but it seemed relatively stable, and it was bound to cut off time to get us back to Greg sooner. 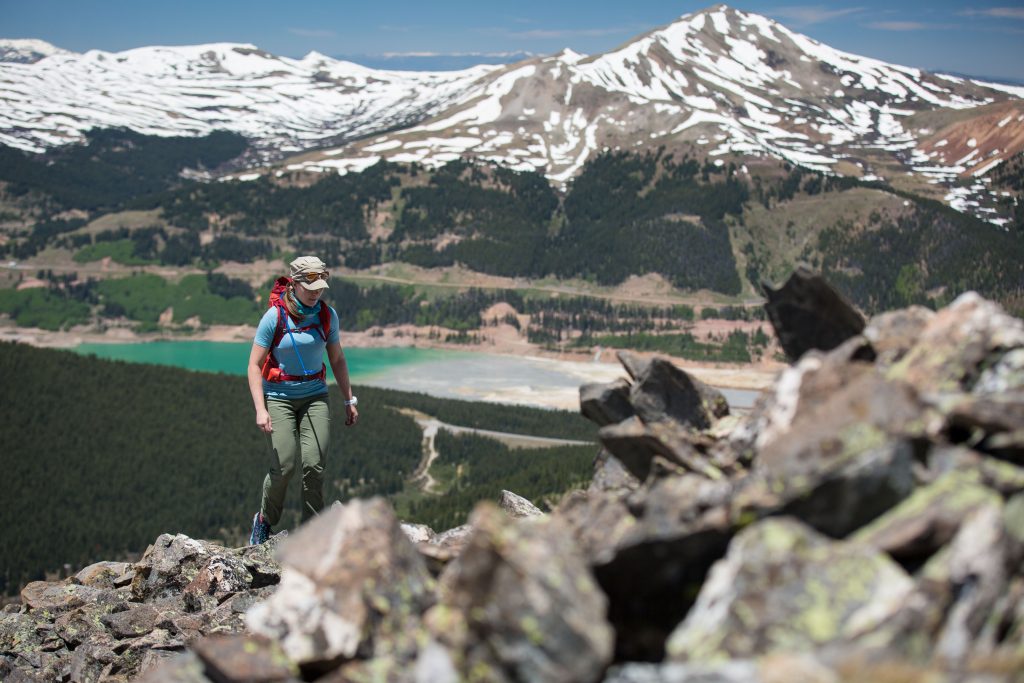 Because, you know. #Logic.

And for awhile, it was a good choice. We carefully picked our way down the gully, staying close to each other to minimize impact from potential rockfall. However, as the descent got longer, we inadvertently spread out more. We were all tired of the mental game that comes with a scree gully, and we each were handling it in our own way. Will and I were nearing the bottom, focusing on every little step, when I chose to put my weight on a rock that wasn’t attached to the mountain. 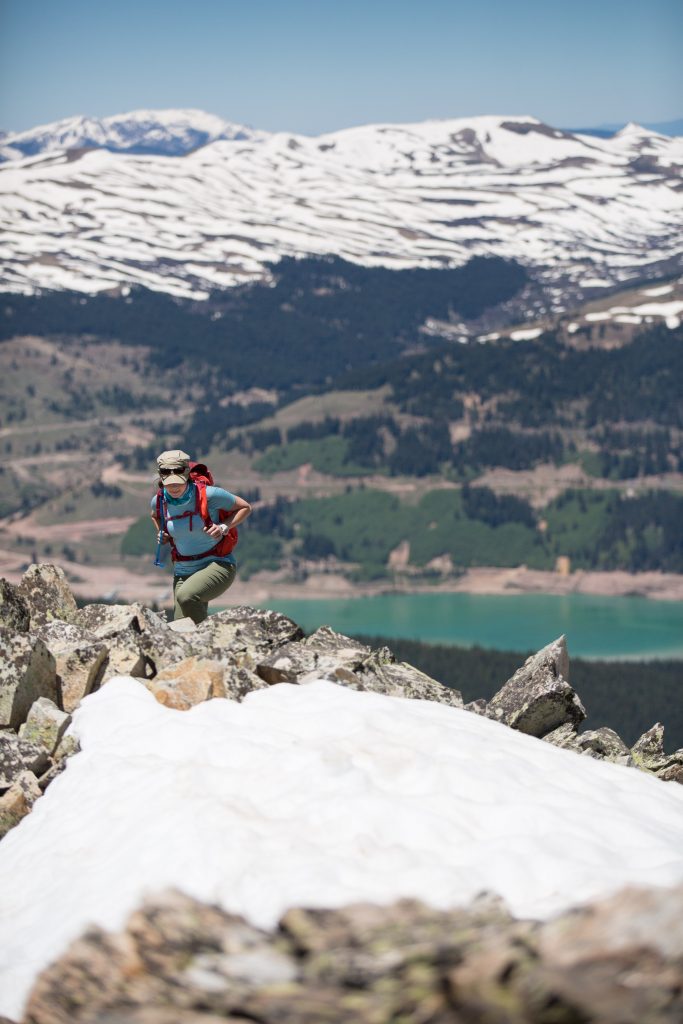 Just like that, I was airborne. The rock flipped out from under me and went sliding down the gully, launching me up into the air. Somehow, while flailing around mid-flight, I completely rotated so that when I finally landed on the ground, I was face down. Thankfully, I was still feet-first down the mountain, but that sure didn’t help my body work against gravity; I slid a solid 15 feet on my stomach before I managed to claw at some rocks to stop myself.

And then I didn’t move for a few seconds, trying to figure out what in the hell had just happened.

I eventually got up, carefully patting my face and my head and my body, trying to see if anything was broken. The wind had been knocked out of me, so I hooted for a few seconds while regaining my breath. I was thankful that nothing seemed to be drastically injured, but I was a bit unnerved when I saw blood all over my right pant leg. Thankfully, it was minor: I had shredded my fingertips and gashed my right forearm while trying to stop myself. Sure, it sucked, but in the grand scheme of things, I came out relatively unscathed! 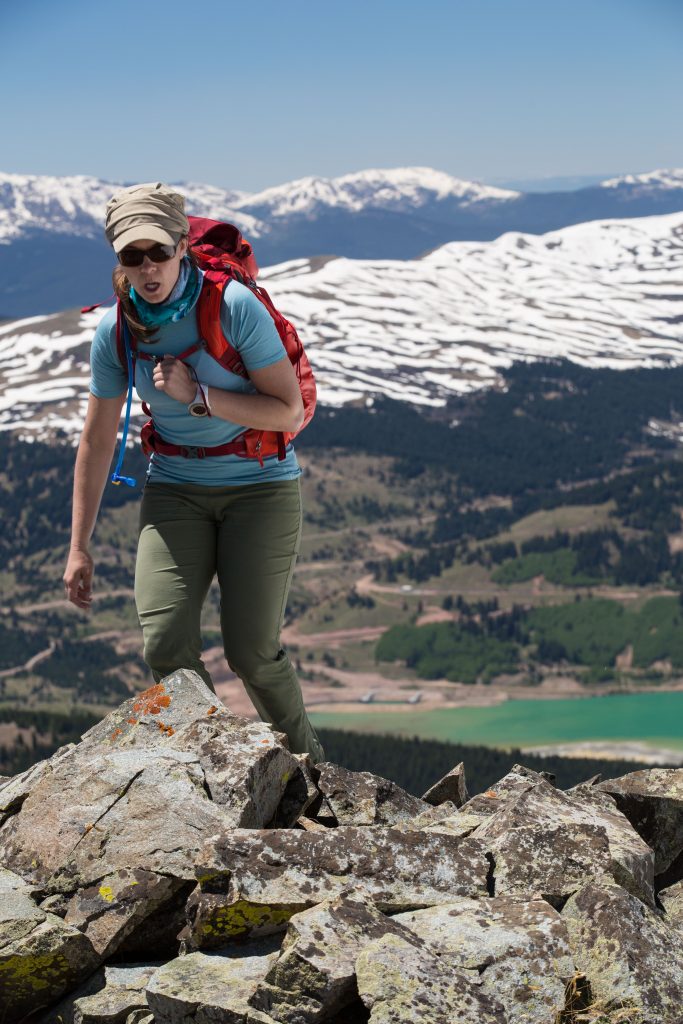 Had to include this one because #reallife. Deep in the pain cave!

I finally looked up at Will, eyes wide and semi-terrified. “What the hell just happened?!” he yelled. “Are you okay?! And what happened to your shirt?”

It was then that I finally looked down at my hiking shirt and realized that not only had I ripped my skin, but my new hiking tee too! I had a hole in the stomach, right over my belly button as if I was giving a peep show on the mountainside. Typical. And ridiculous looking!

After that, I was visibly shaken and stuck to Will’s side like glue. I triple-checked every step and was beyond elated when we finally reached the valley below the scree field. So much for the quick way down! 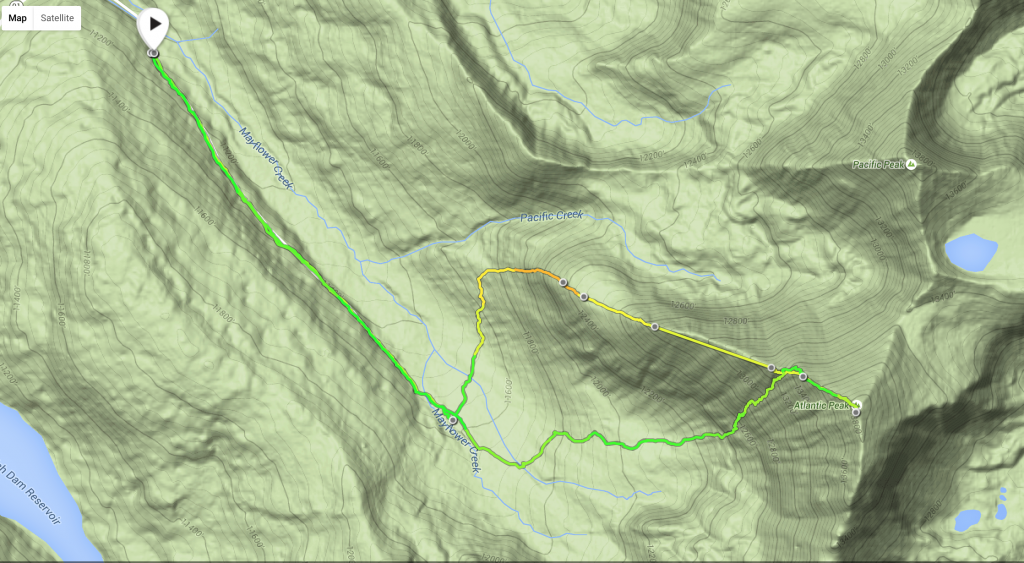 Our questionable descent notwithstanding, Atlantic was a fun day with a lot of reward for minimal work. Not only is it close to the Denver Metro area {maybe 90 minutes to the trailhead?} but it’s oddly not crowded. And even if you don’t want to tackle the big guys, Boston Mine is always worth a visit! {Update: to read my article on Boston Mine, check it over at the Experience More digital publication!}

If You Go: Trail Stats

Mileage: 5.6 miles RT {from our campsite on the jeep road}