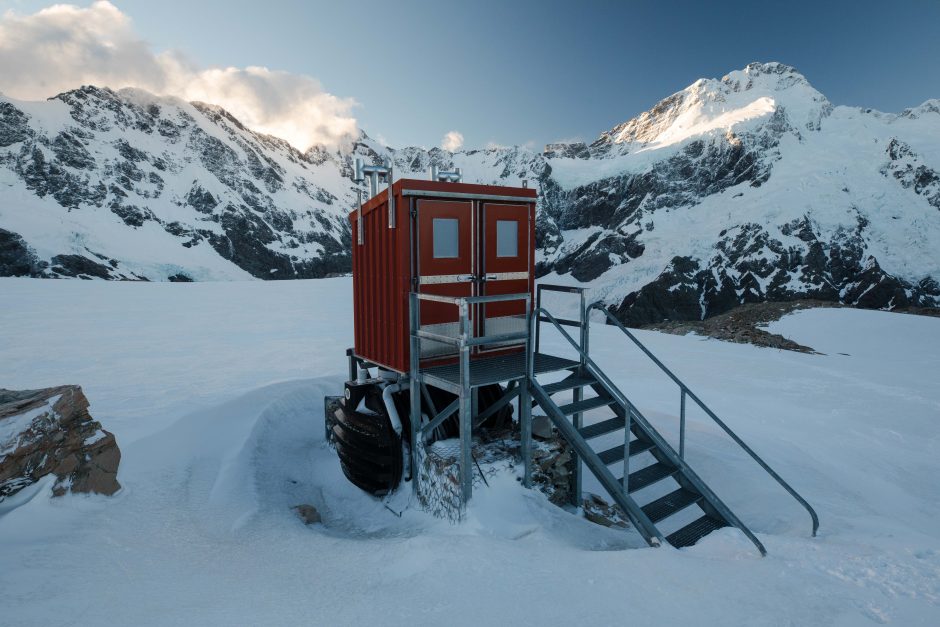 Only 36 hours after our arrival in New Zealand and my mouth was already agape; could the hike to Mueller Hut be *any* more beautiful?

Let me back up.

Long before we left the United States, we did a little research and stumbled on Mueller Hut. Located at 5,900 feet in Aoraki/Mt. Cook National Park, the current structure is the fifth iteration in a series of Mueller Huts that began back in 1914. The modern-day Mueller Hut opened in July, 2003 by none other than Sir Edmund Hillary. As legend has it, Hillary completed the hike up to Mueller {and subsequently, the looming  Mount Olivier} and it was this hike that inspired his lifelong passion for the high alpine. 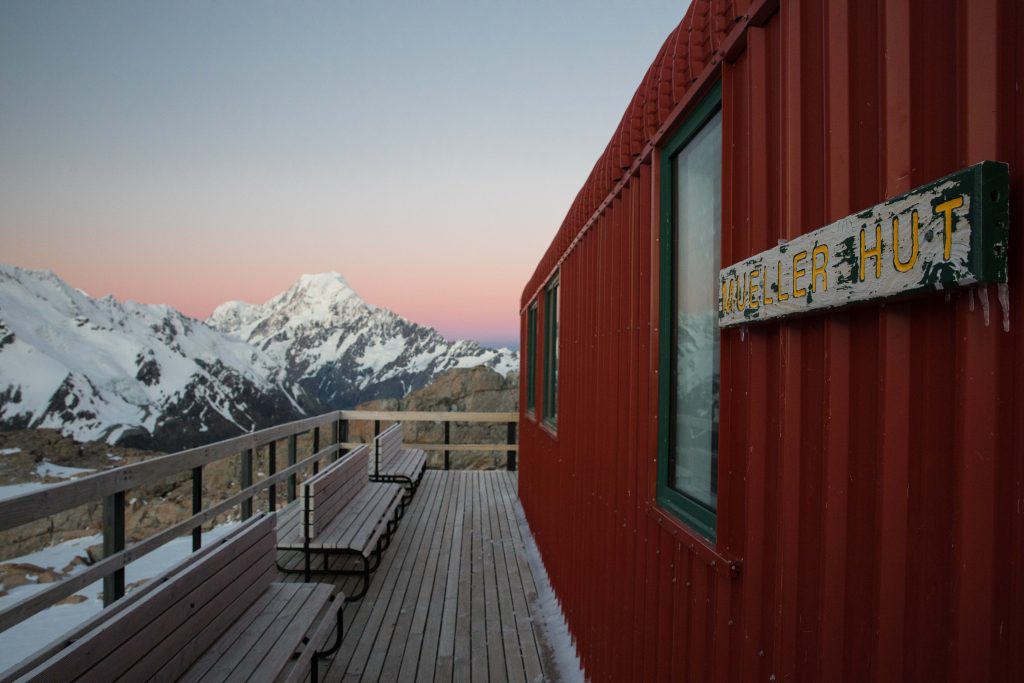 Not a bad hike to kickoff our trip, right?!

We spent the night in our campervan in the campground near the trailhead, eager for an early start in the morning. But, as luck would have it, the weather wasn’t looking too hot. Our van shook with wind gusts and sheets of rain all night; what kind of weather would we have the next day?

Fortunately, we awoke to slightly better weather. Dark patches of clouds covered the sky but occasional bursts of sunlight would break through the misty veil. Sure, it wasn’t ideal, but it would have to do: it was time to check out Mueller Hut! 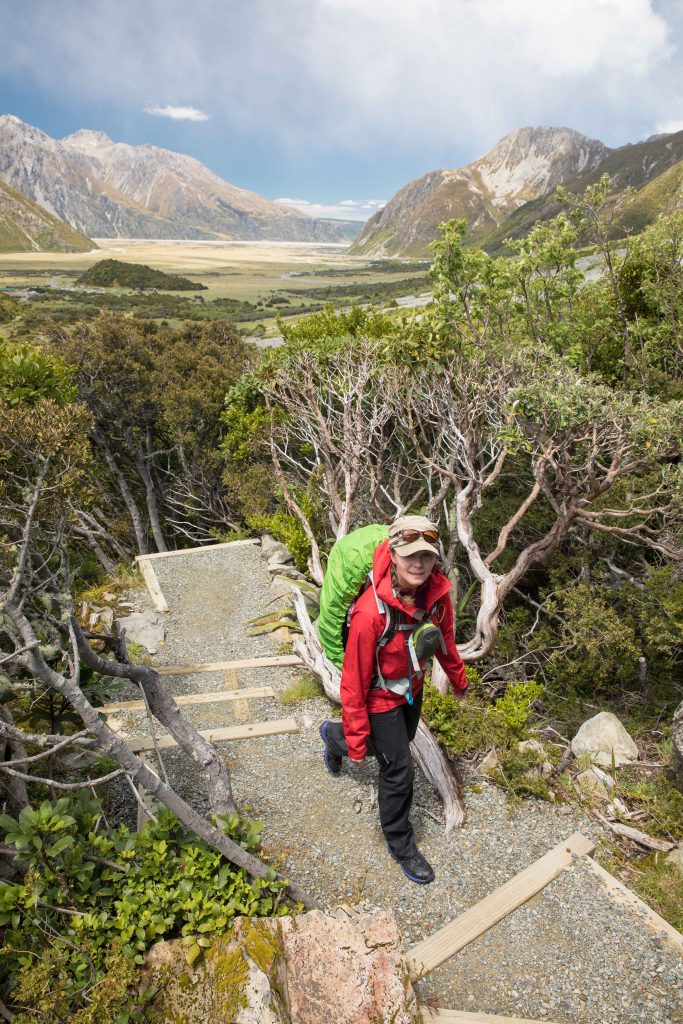 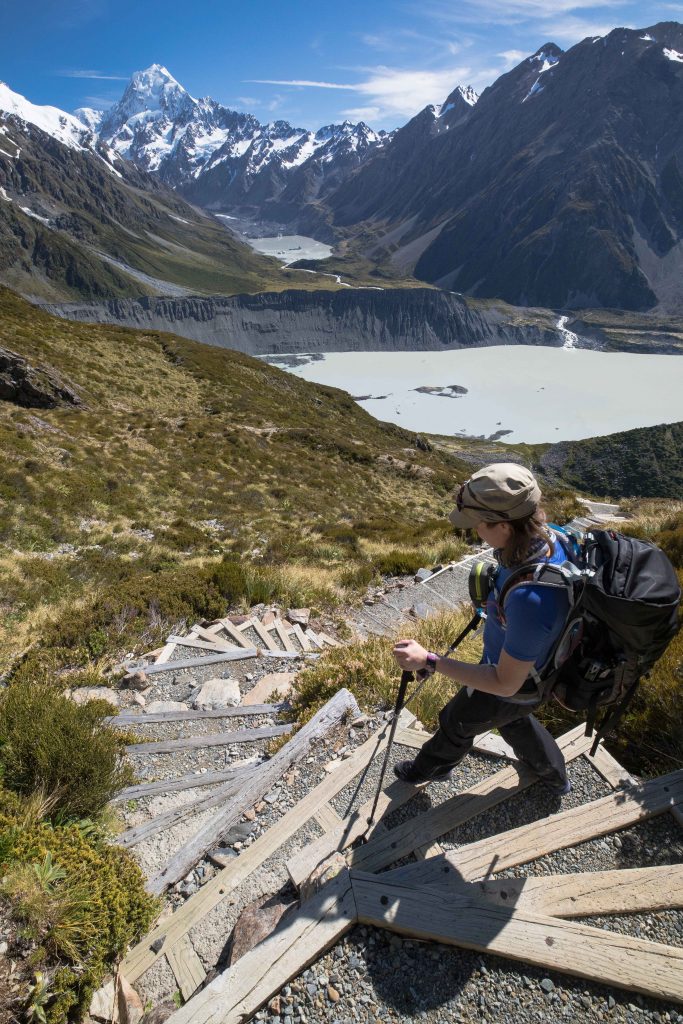 For the record, my calves hurt for a solid 24 hours after this trek!

Almost immediately, I realized that hiking in New Zealand is a far cry from hiking in the United States. They do not mess around with elevation gain! We had taken less than 200 steps on the trail when we encountered a staircase. As it turned out, this hike is so steep that these steps continued for for almost two hours. Stair after stair; quad-busting-climb after quad-busting climb. The staircase continued to climb into the sky, sucking air from my lungs and blood from my legs. At first, I gasped in pain but eventually, I settled into a nice rhythm. If there was a silver lining in this ass kicker of a hike, it was the elevation. Sure, it was a lot of climbing but the altitude was much lower than I’m used to back in Colorado; I could hang! 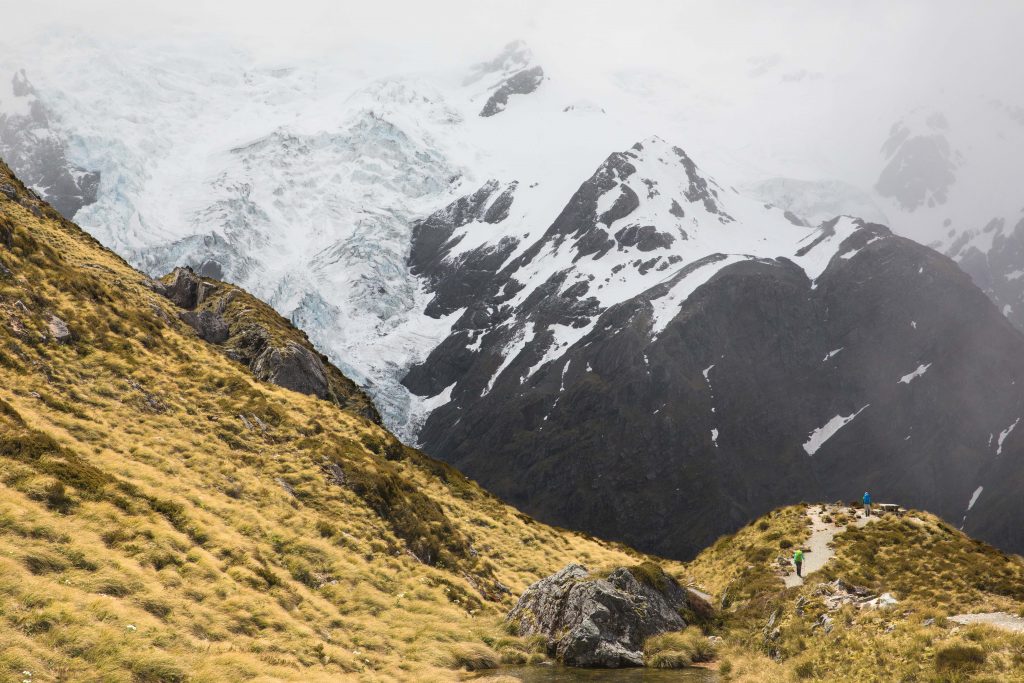 The four of us climbed and climbed, eventually reaching Sealy Tarns. At this point, the weather had rolled back in and a thick cloud hovered above us, lightly sprinkling a cold rain. The wind was vicious too; I needed to batten down the hatches {or my hood} to keep the howling gusts from stinging my face.

The climb continued upwards towards the ridge, swapping out the steep staircase for equally steep single track. Eventually, the dirt and talus turned to snow as we enter the high alpine. At this point, Will and I ran into a couple hiking back down the mountain. They had originally booked Mueller Hut for the night previously, but thanks to the storm, weren’t able to make the trek. Apparently, no one had been allowed at the hut that night thanks to 90 mph winds on the ridgeline! 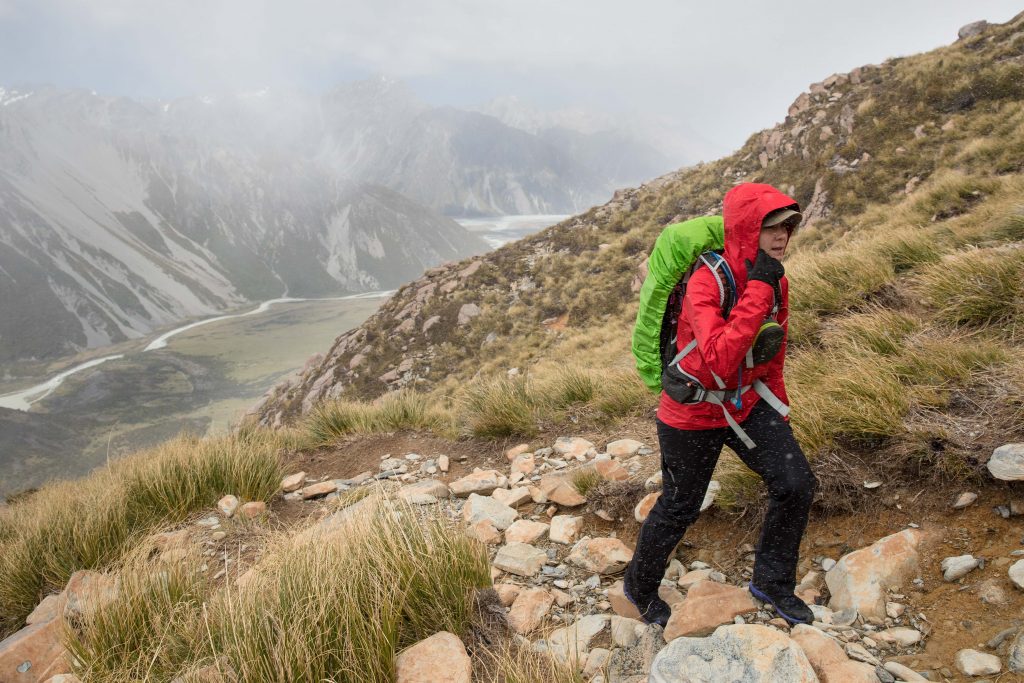 Am I going the right way?

Eventually through the snow, Will and I obtained the ridge and caught a view of the backside of the mountain. More clouds had blown in so we could only see glimpses of avalanche debris and snowfields. But from what we could see, we both got that excited feeling in our stomach. We knew the scenery would be epic if only the weather would clear. 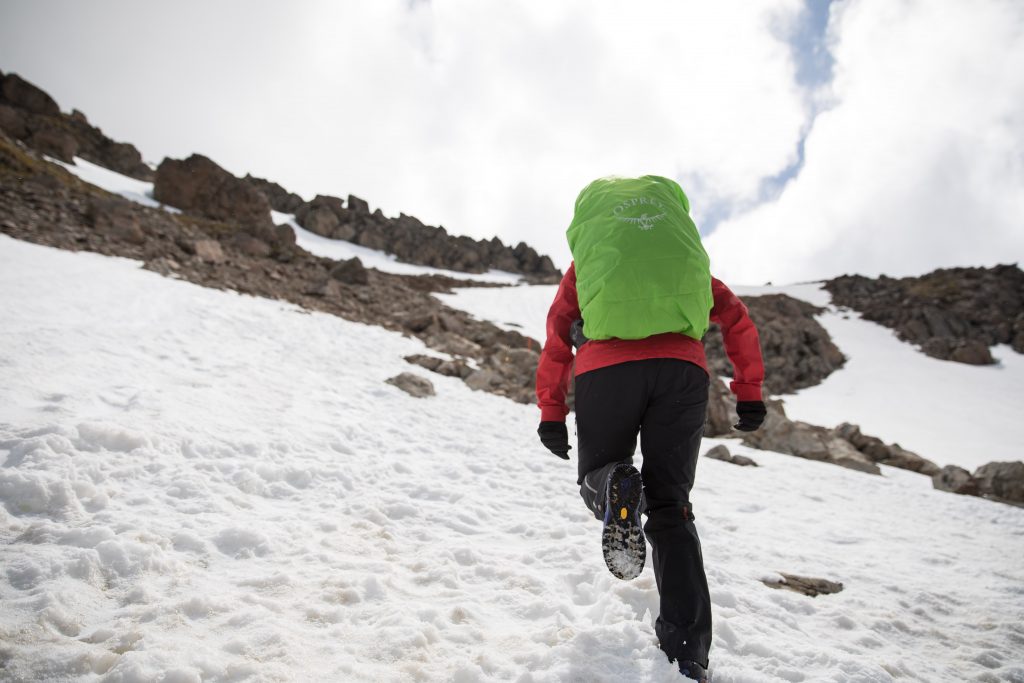 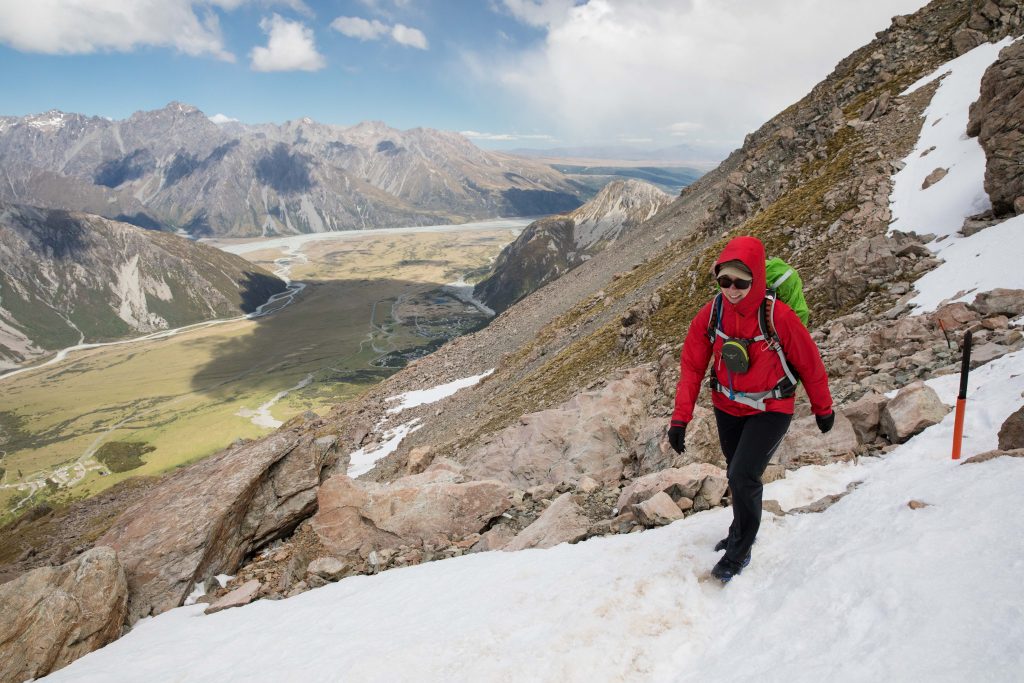 The last push up the snowfield wasn’t anything difficult, but the temps were continually dropping and my hands were definitely cold. Plus, I was battling that internal monologue: I knew the hut was close, but where the heck was it?! Thankfully, we rounded a bank of boulders and saw a structure in the distance. Mueller Hut! 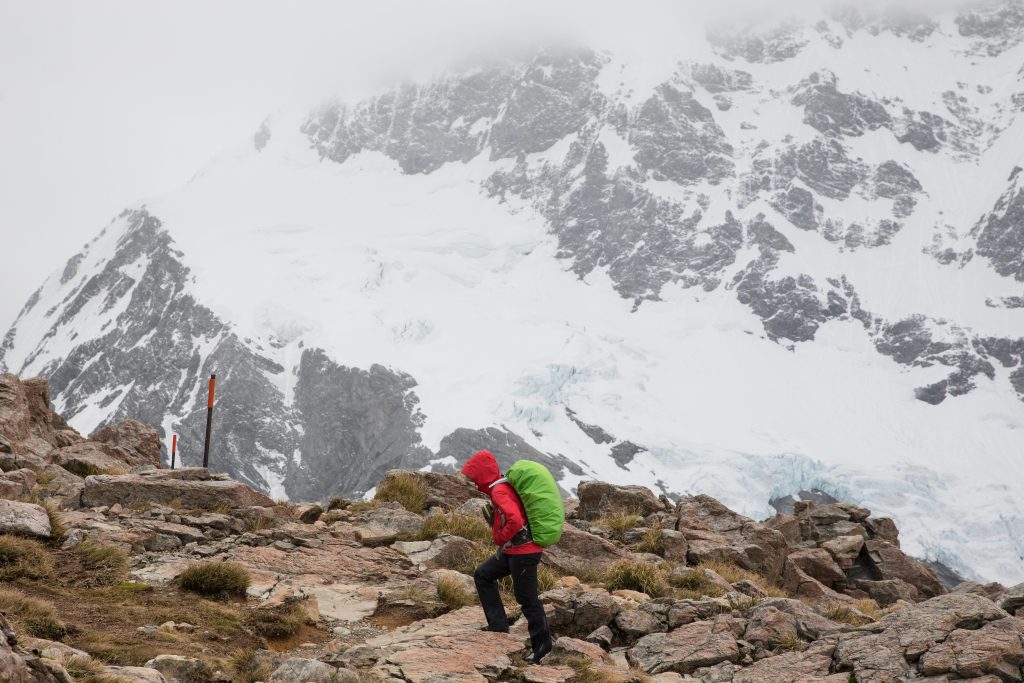 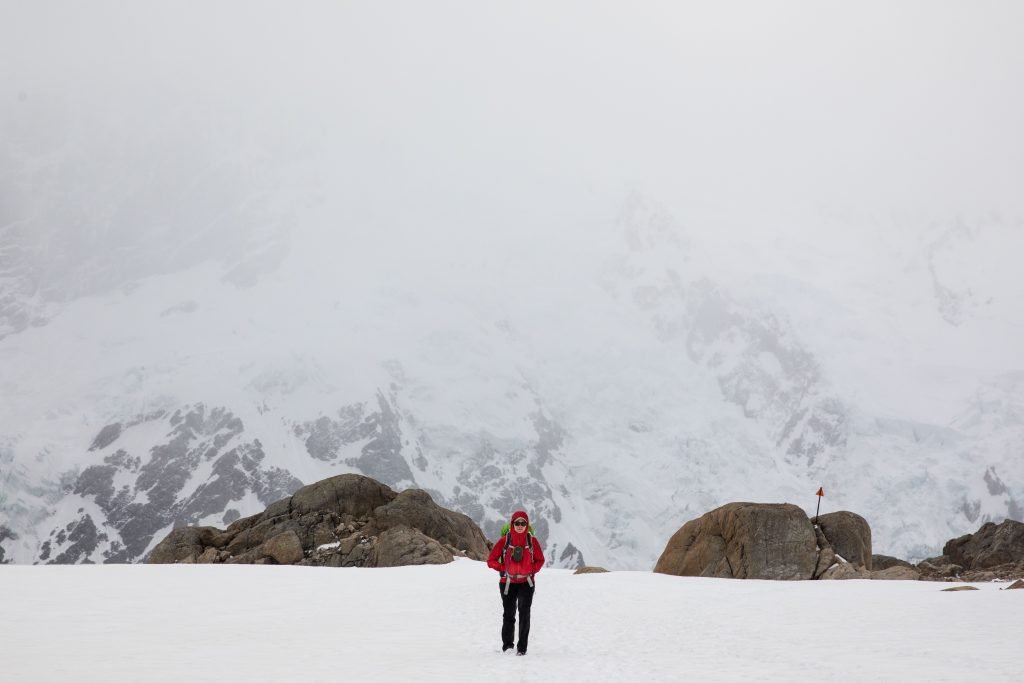 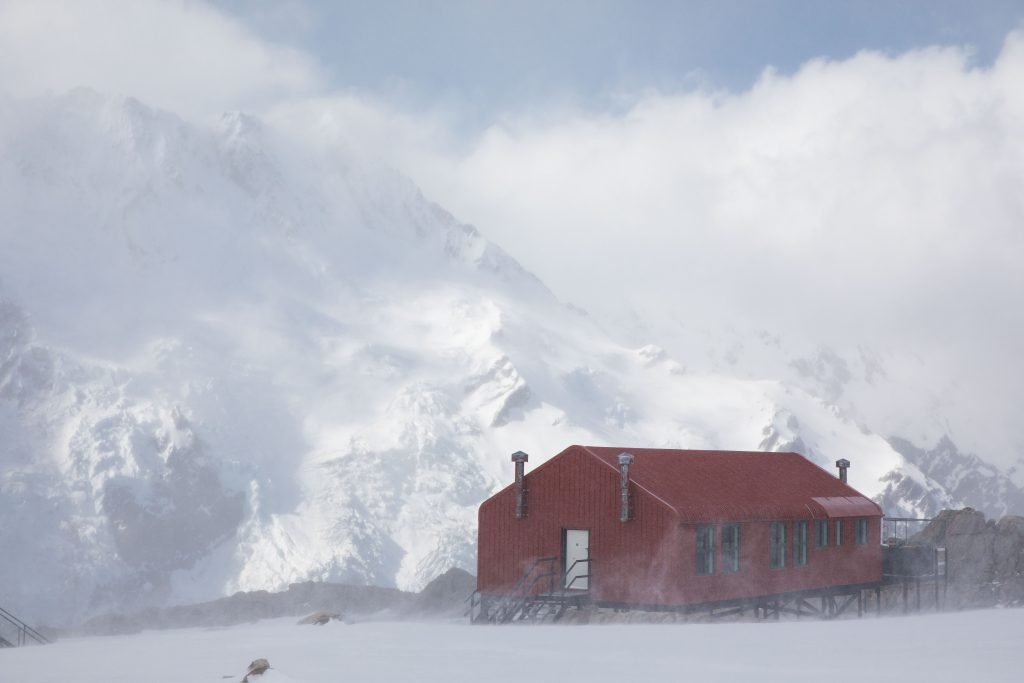 Arriving at backcountry huts is one of the best feelings in the outdoor world. After a long day on trail, there is nothing quite like arriving at “home,” complete with warm food and a soft bed. Surprisingly, Mueller isn’t heated with a wood-burning stove, but the interior temperature still surpassed the exterior chill. Plus, there were stoves and tables and beds!

We passed the night reading magazines and scampering up the hill behind the hut to watch the sunset. The winds were still whipping but we all started to see signs of clearing. 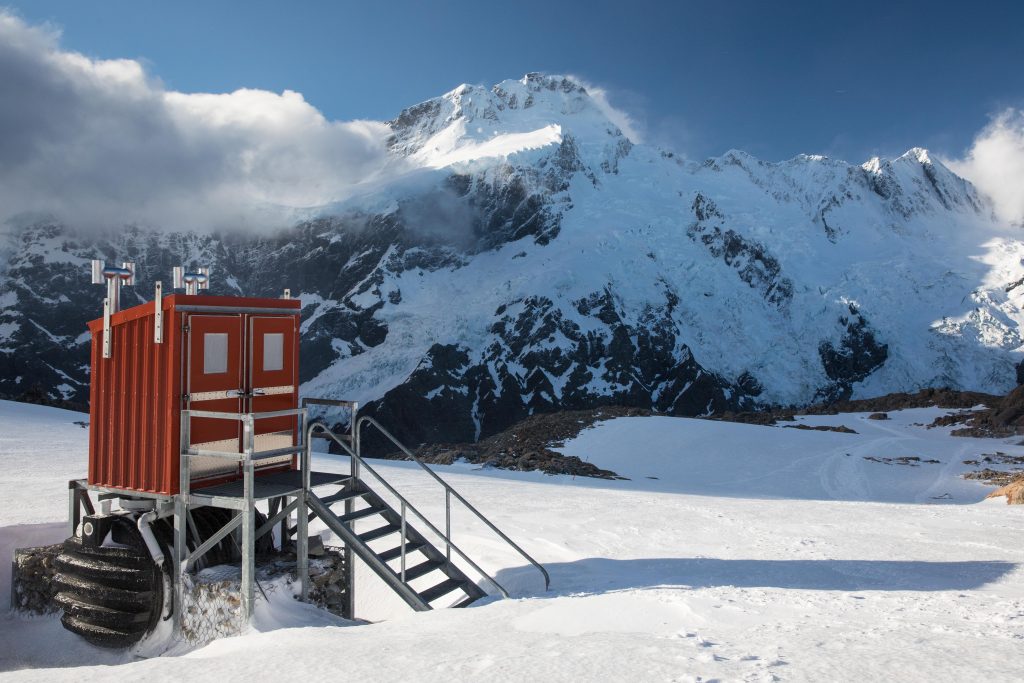 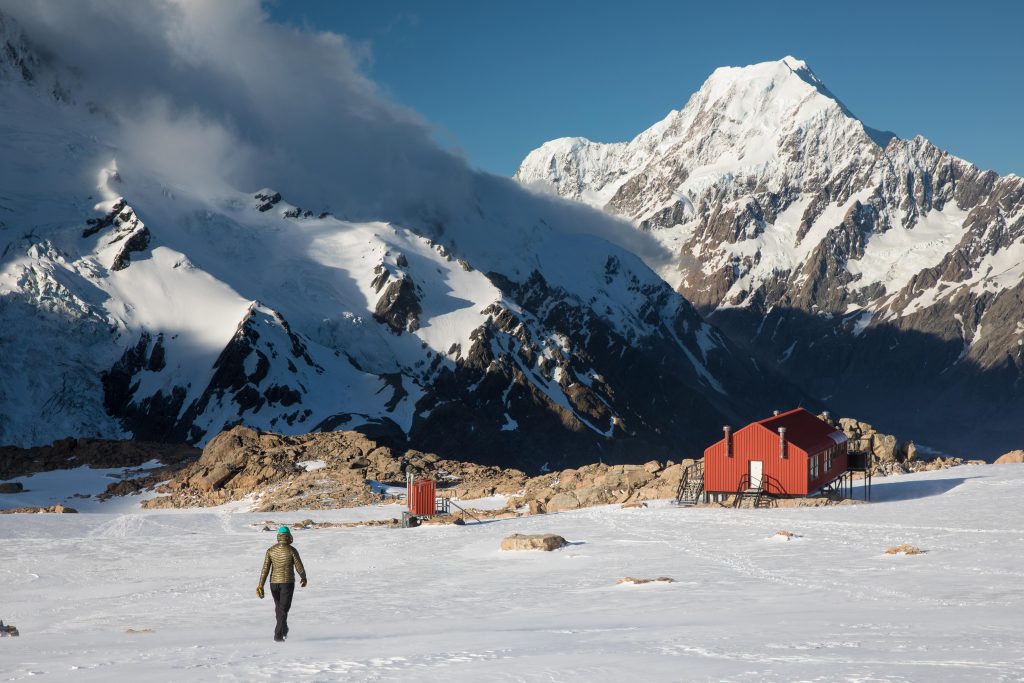 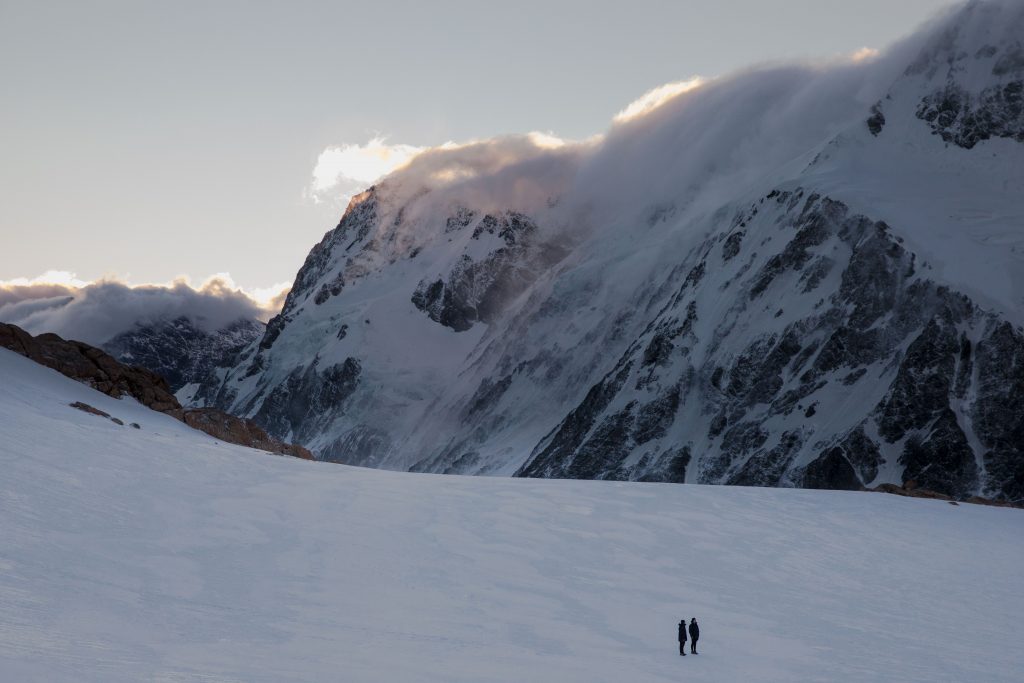 And by nightfall, that’s exactly what happened. The high winds blew the clouds away, leaving us with a crystal clear sky full of shooting stars and glistening planets. 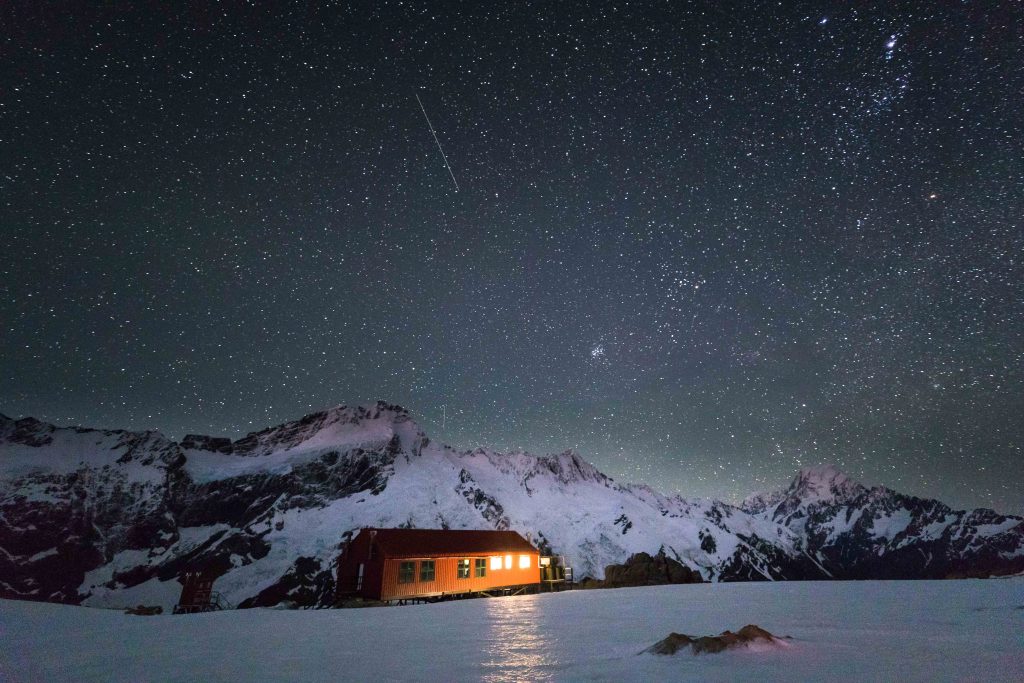 Dawn came ridiculously early! After spending a late night shooting the stars, neither of us wanted to rudely disrupt everyone sleeping in the bedrooms. Instead, we slept on the benches in the kitchen. This was a great plan until all the pre-sunrise people got up to take photos. I couldn’t sleep on the benches any longer, so I climbed out of my sleeping bag….only to realize Will was long gone. Of course my husband was the first person outside to shoot the sunrise! 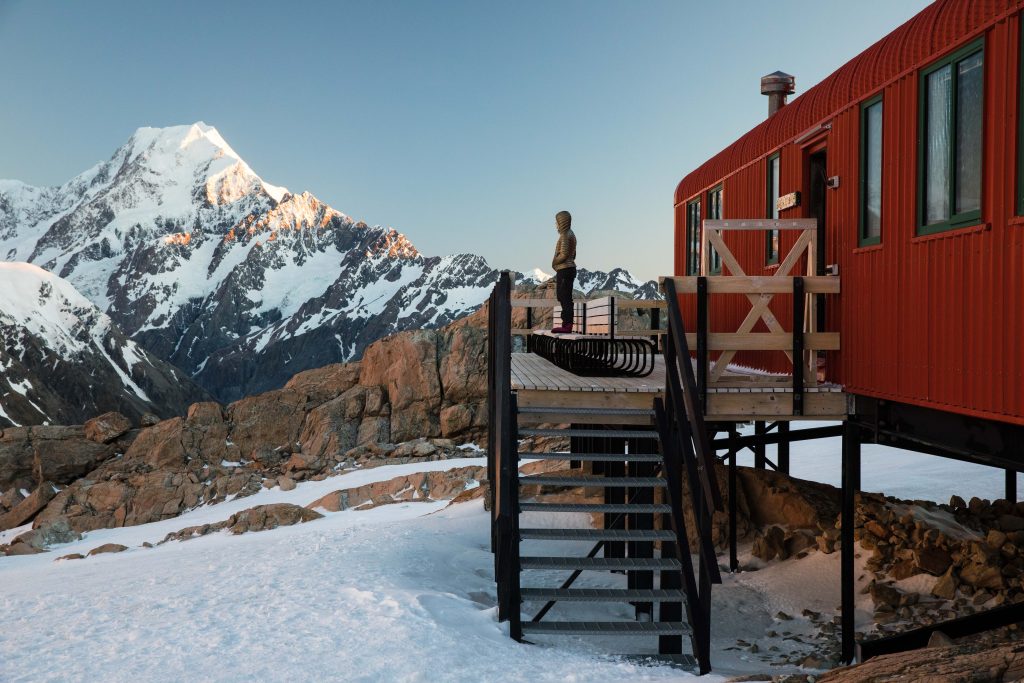 ‘Will, can I go inside now? It’s really freaking cold!’

As we hoped, it was a bluebird day and the scenery was indescribable. Quite literally, I’ve never seen such a fantastic alpine environment in my life. Blue icebergs clung to the sides of snowcapped peaks and avalanche drifts slid down steep hillsides right before our eyes. 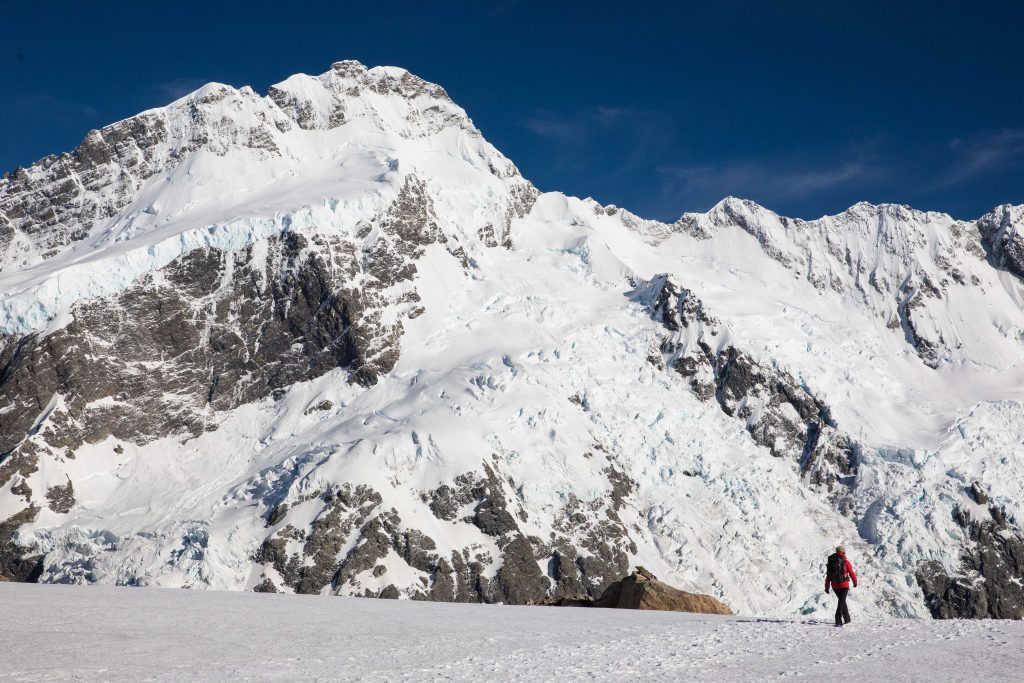 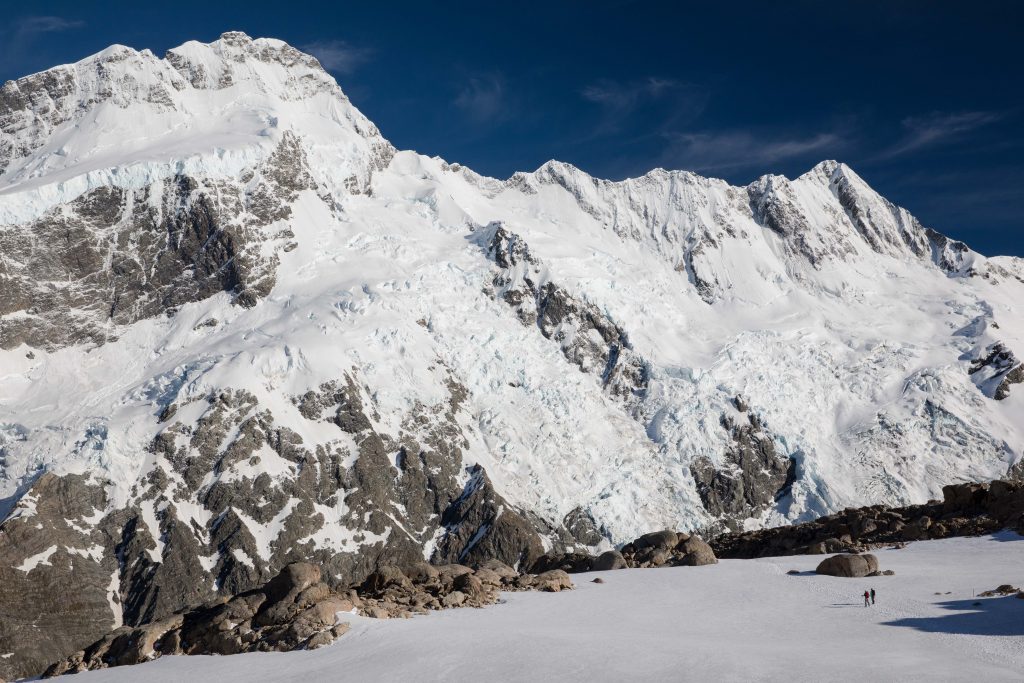 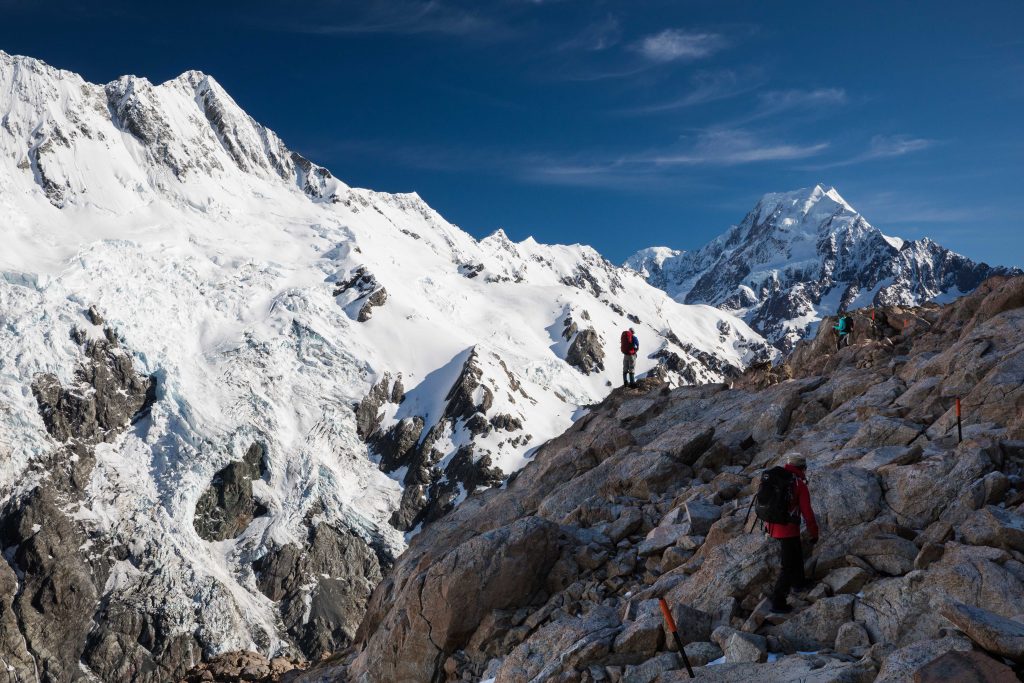 We gleefully began our return hike, and I could’t contain my excitement. Was this real life? How did I get so lucky to see such majestic beauty? 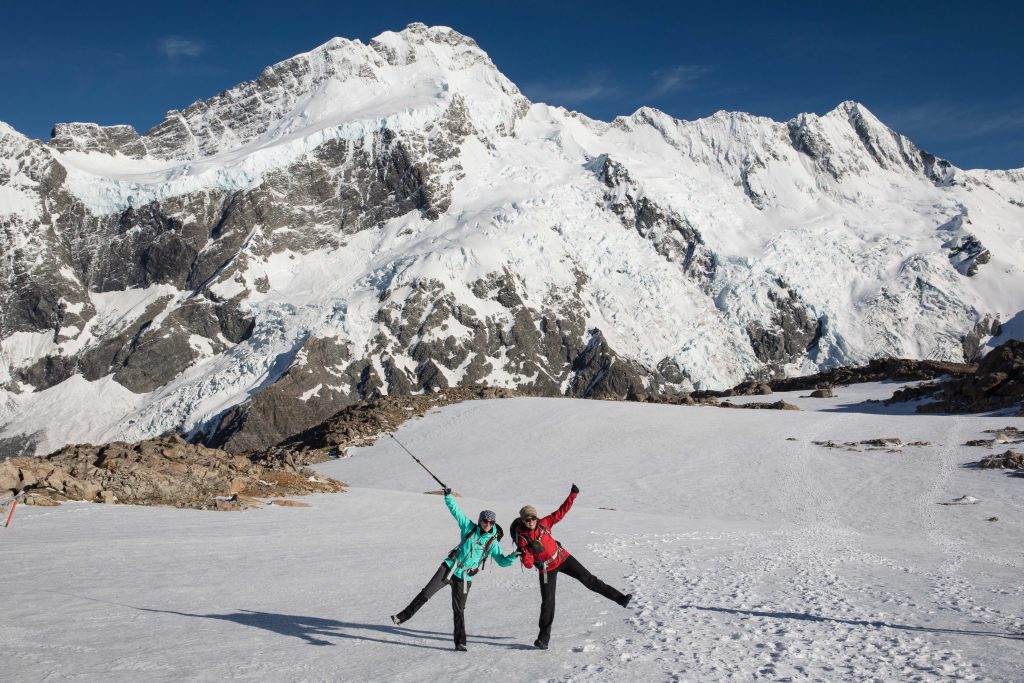 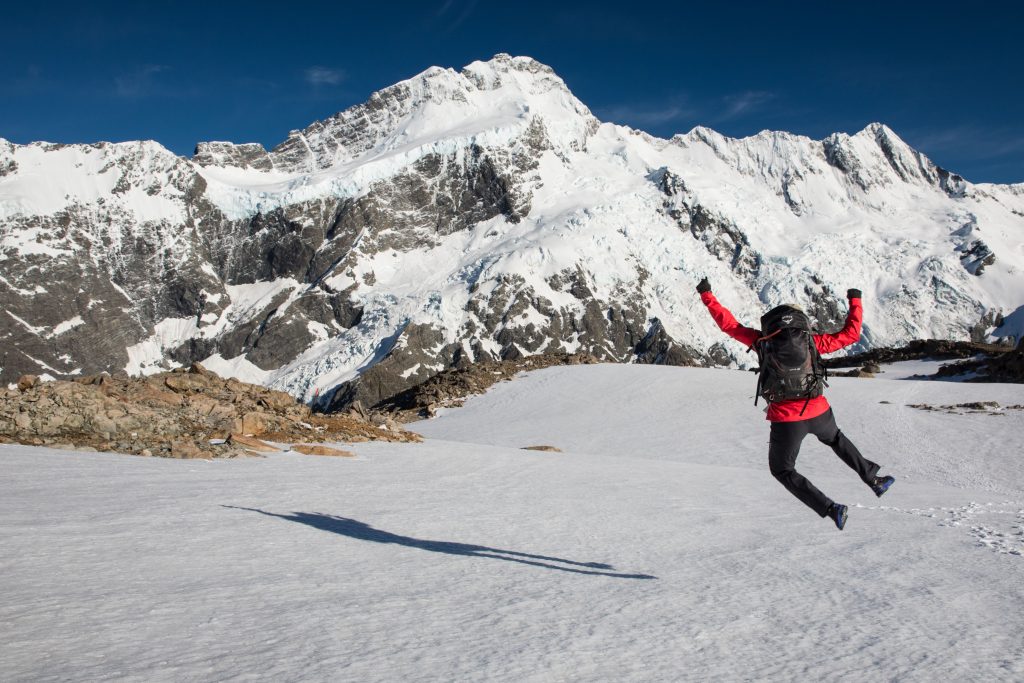 Above: Del and me, beyond happy to be there

Below: I couldn’t contain my excitement!

What To Pack: Warm clothes, sleeping bag, food, a cook pot, utensils and a headlamp. The hut has stoves for cooking but no dishes. There is water as well. I’d also recommend trekking poles because it is steep!

Restrooms: Yes. They had TP but I’d always bring some, just in case!

Reservations: Yes. We booked ours two months in advance due to the holiday season. 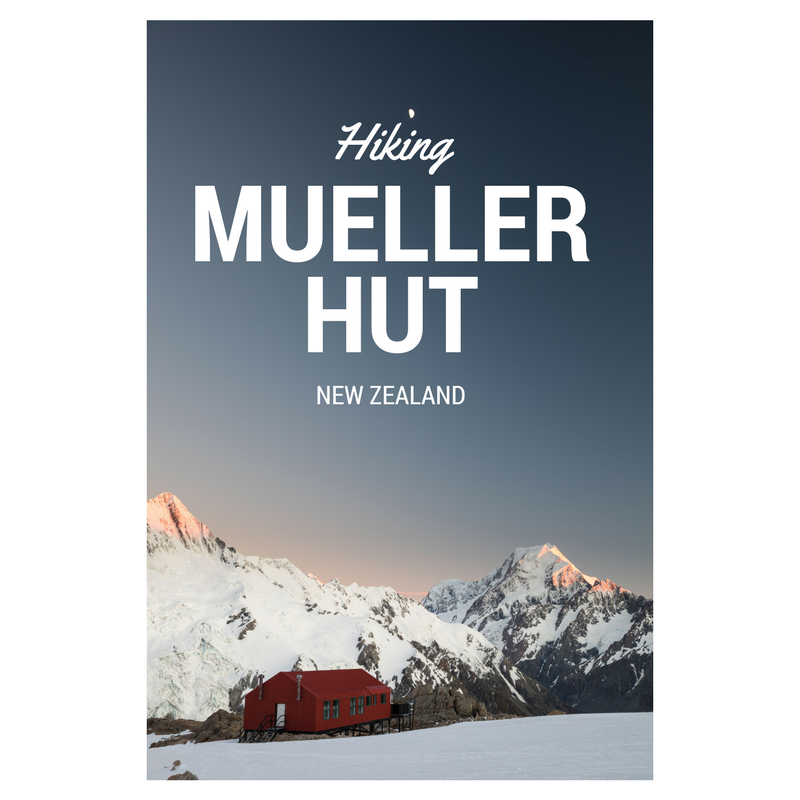 Nolah: Sleep With A Purpose {Giveaway}