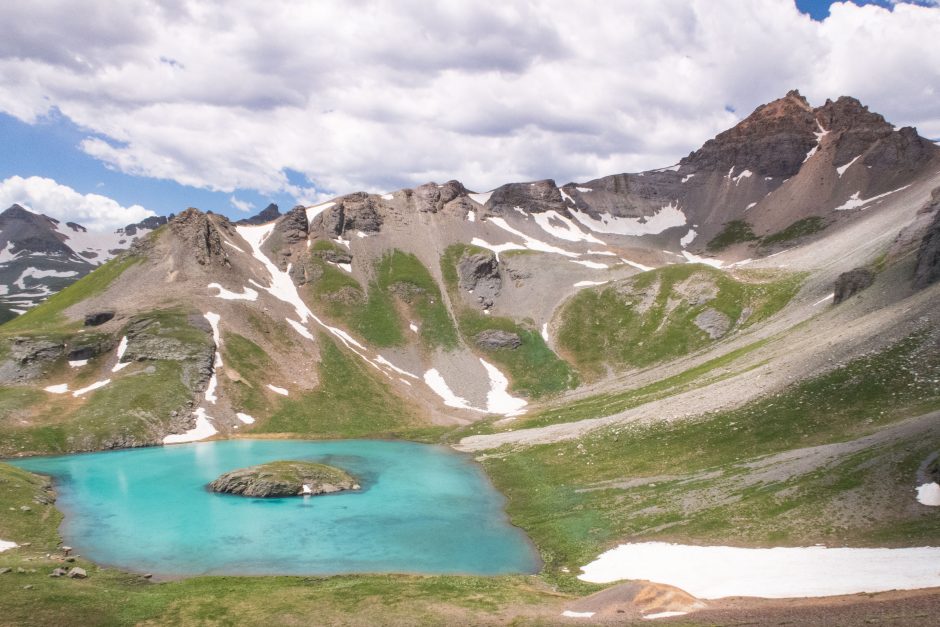 There are some hikes that are enjoyable with the fresh air, high-alpine smells, and green meadows sprawling into the distance. And then there are those hikes that are abso-freaking-lutely unbeatable with vivid color, fields of wildflowers and turquoise-colored lakes so surreal that it’s hard to imagine they exist outside of a fairytale.

This hike to Ice Lake Basin involves scenery of the latter variety. 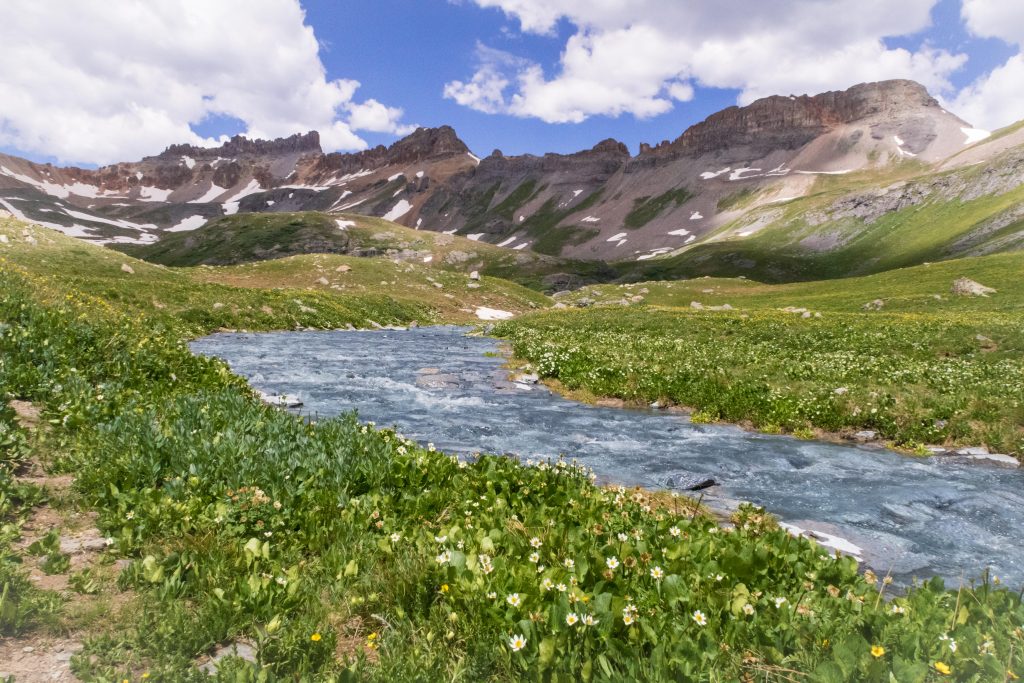 After watching the start of Hardrock, our motley group of journalists decided to hike a portion of the course and trek on up to Island Lake in the Ice Lake Basin. Since they alternate the direction of Hardrock every year (clockwise one year, counter clockwise the next) this portion of the hike would be ~mile 15 of the race. Other than that, I didn’t really know where we were headed. Others had googled the hike and told me it was beautiful, but I preferred to go in without any preconceived notions. 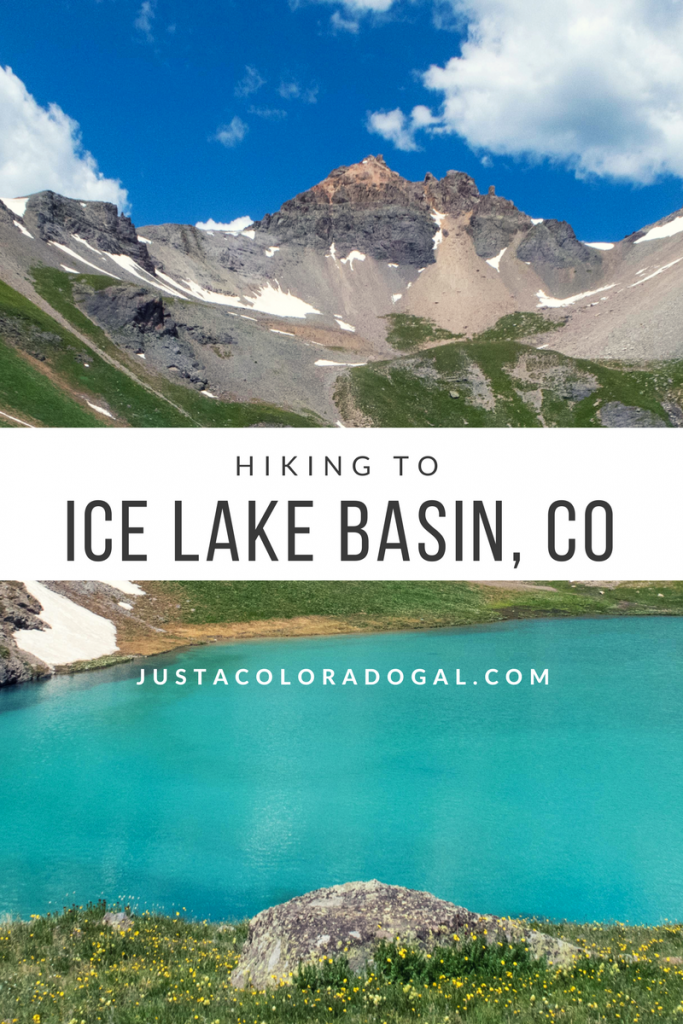 Immediately, our group broke into two packs: Adam Chase (Colorado Running Hall of Fame member) was leading the first group while I hung back with Jen and Janelle, the two PR gals that were hosting us for the weekend {Because, let’s face it: I can’t keep up with Adam anyway!} Turns out, we should’ve stuck together….it would have been a lot less work! 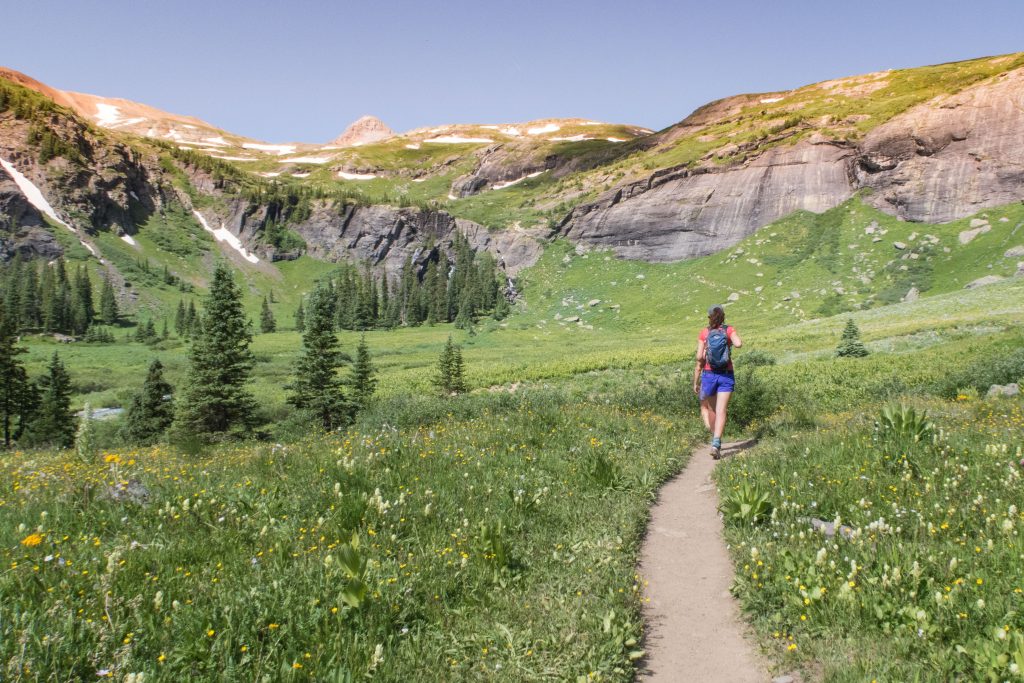 As the faster group scampered ahead, Jen and Janelle patiently waited for me to stop and shoot 1000 photos. I couldn’t help myself; the scenery was outstanding and we hadn’t even crested treeline! 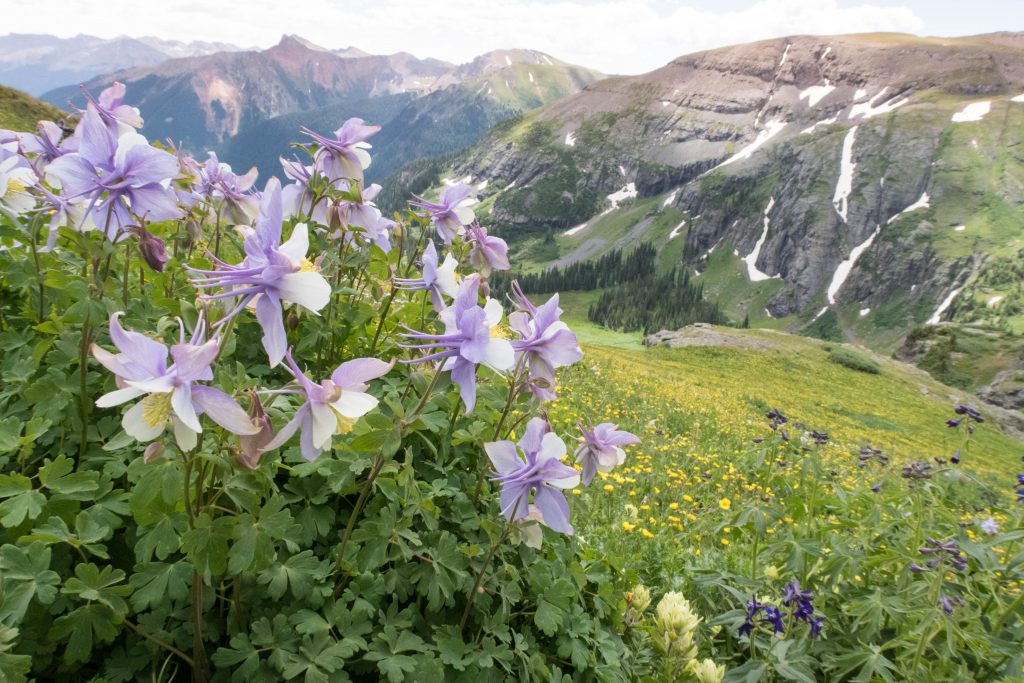 We hiked upwards, eventually reaching a fork in the trail where we encountered some back-of-the-pack Hardrock runners. They were hiking upwards, smiling as they went, and likely enjoying the fact that they were only on mile 15 of the grueling course. We let them hike on by, and then followed them until we reached a second fork. Then, we experienced a dilemma: which way did we go?

Need a new backpack for your hike to Island Lake? These are some of my favorites.

The runners headed right but the few other hikers were trudging to the left. Ice Lake Basin includes both Island Lake and Ice Lake, but we weren’t exactly sure how the trails mapped out. Thankfully, a race photographer crossed our path and we asked him: “Definitely don’t go to the right to get to Island Lake,” he told us. “The runners are going that way and they don’t even pass that lake. You definitely want to go left.” Easy enough! 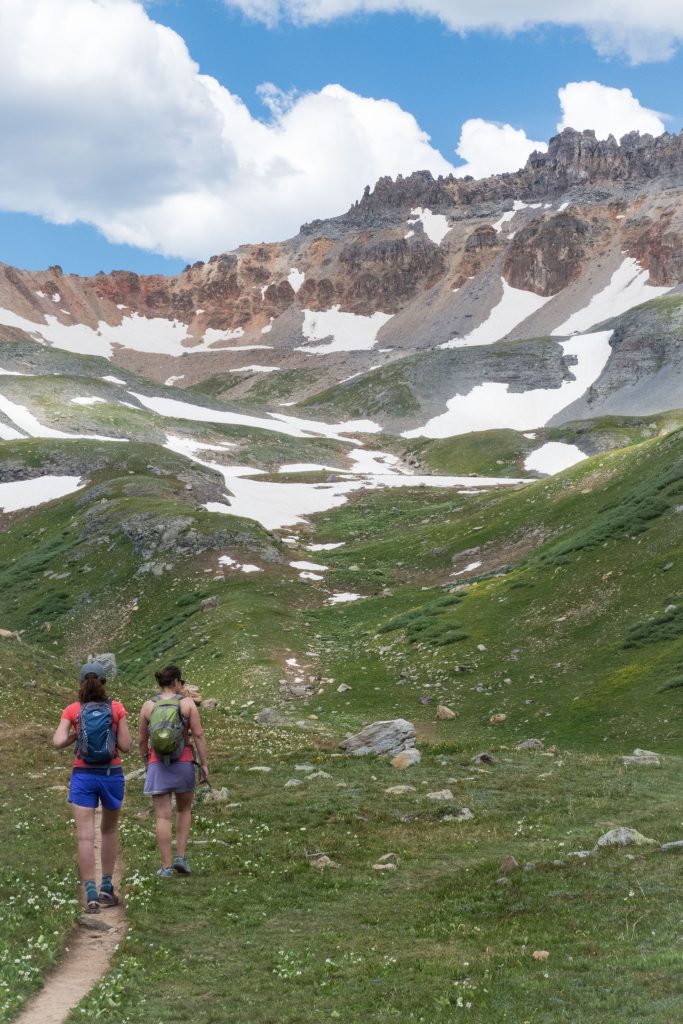 From what minimal trail beta I’d heard, the hike to Island Lake is steep. I’d originally been told we’d be doing 7-8ish miles with 3k in elevation gain. And while that is a lot, I immediately noticed that our trail seemed to be climbing damn near vertically. It sure seemed like more than 3k but what did I know? I was just happy snapping my photos!

We trekked onwards, still wondering where the other half of our group was, but confident in our knowledge that they would likely meet us at the lake. Eventually, we crested a small hill and the glimmering blue water reflected in the sunlight. A lake! 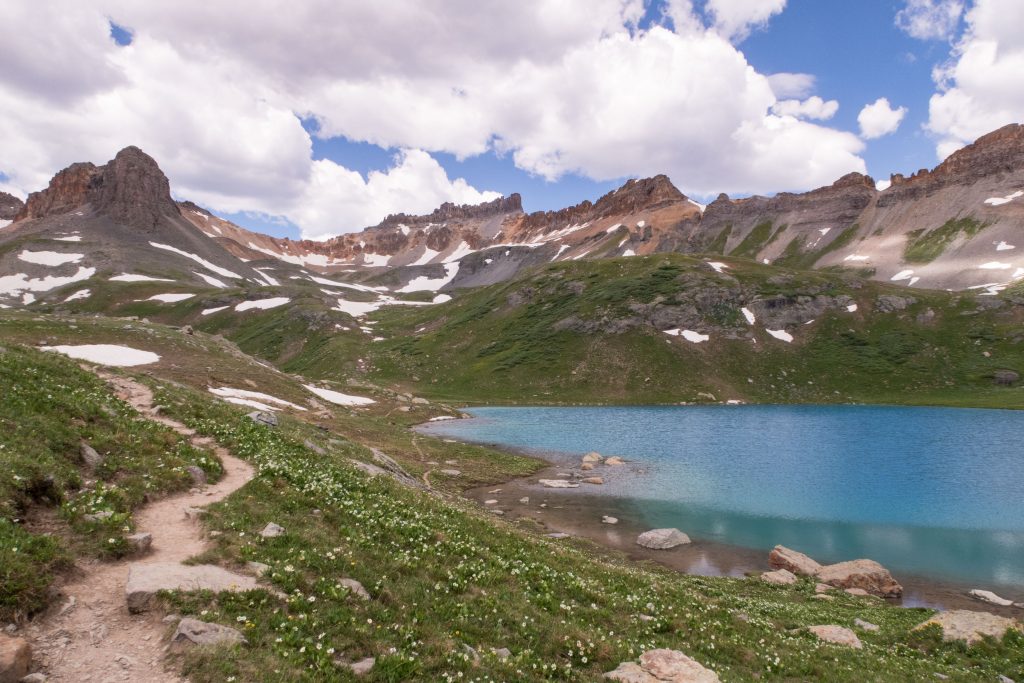 But wait….that’s not Island Lake. Whoops!

Turns out, the photographer had been the opposite of correct. As we found out, the Ice Basin Trail is a big lollipop loop with Island Lake sitting on one side of the loop and Ice Lake sitting on the other. In heading left, we hiked our tired legs straight to Ice Lake, and completely missed Island Lake. And, as we quickly realized, our crew wasn’t at Ice Lake. They had clearly gone the correct way and headed straight to Island.

Thankfully, we spoke with a man who suggested we hike the “top”portion of the lollipop loop and head straight to Island Lake {rather than hiking back to the the trail junction}. Not only would this be quicker, but it would save us from losing and re-gaining all of our hard-fought-for elevation. 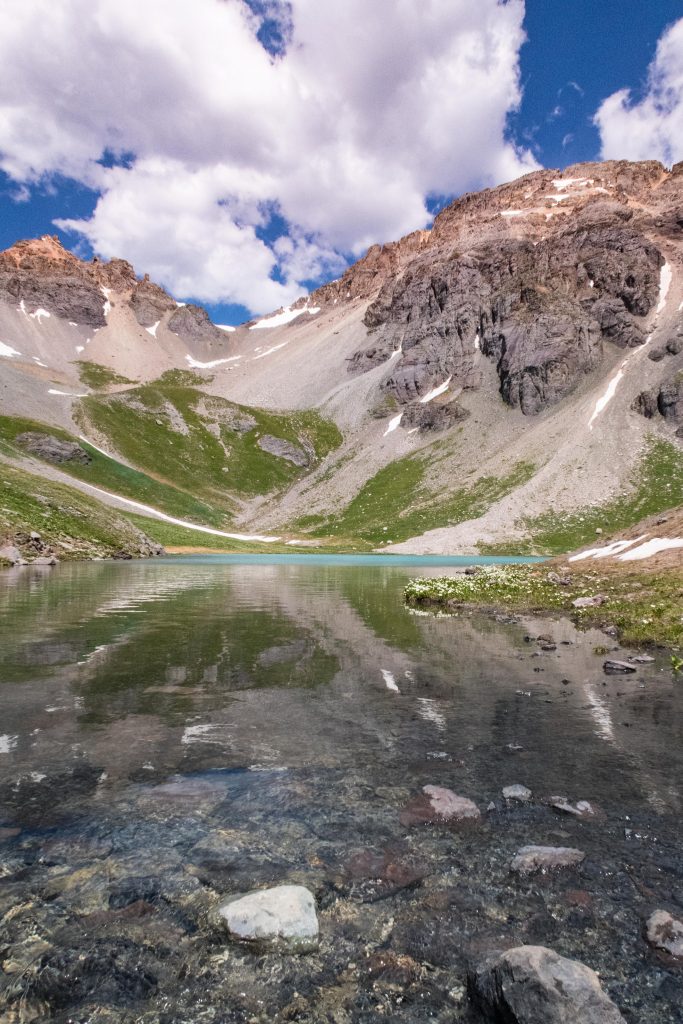 It wasn’t too long before we reached Island Lake which–in my opinion–was even more stunning than Ice Lake. While Ice Lake showcased a wicked ridgeline in the backdrop, I fell in love with the picturesque namesake island that sat in the middle of Island Lake. I enviously watched a kayaker as he paddled out there, each stroke cutting through the crystal-blue turquoise water. How he got that kayak to Ice Lake Basin, I’ll never know! 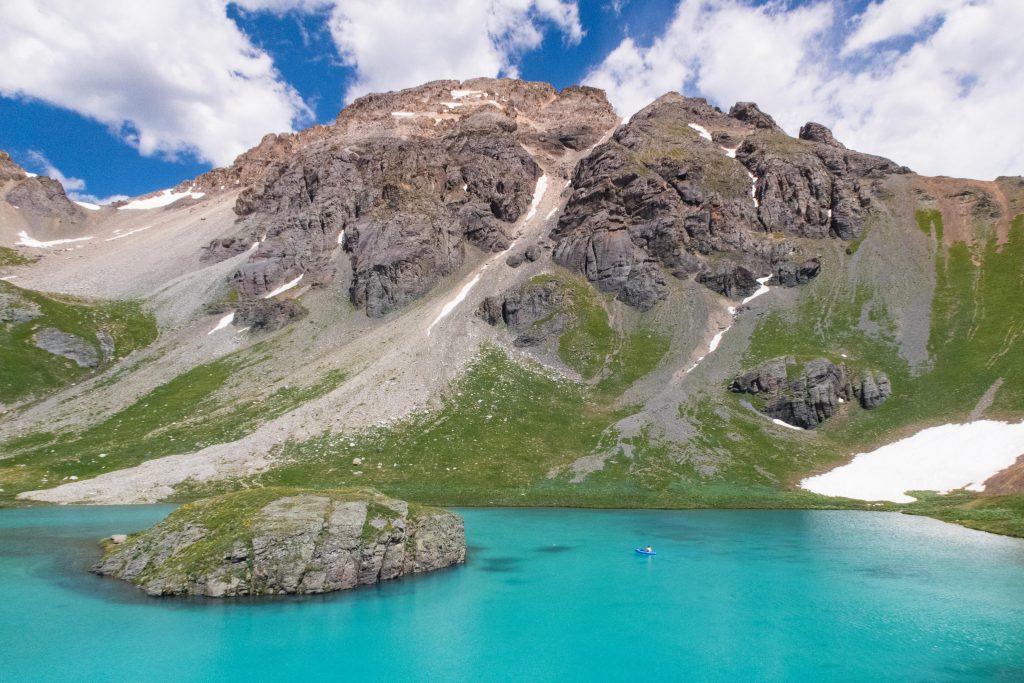 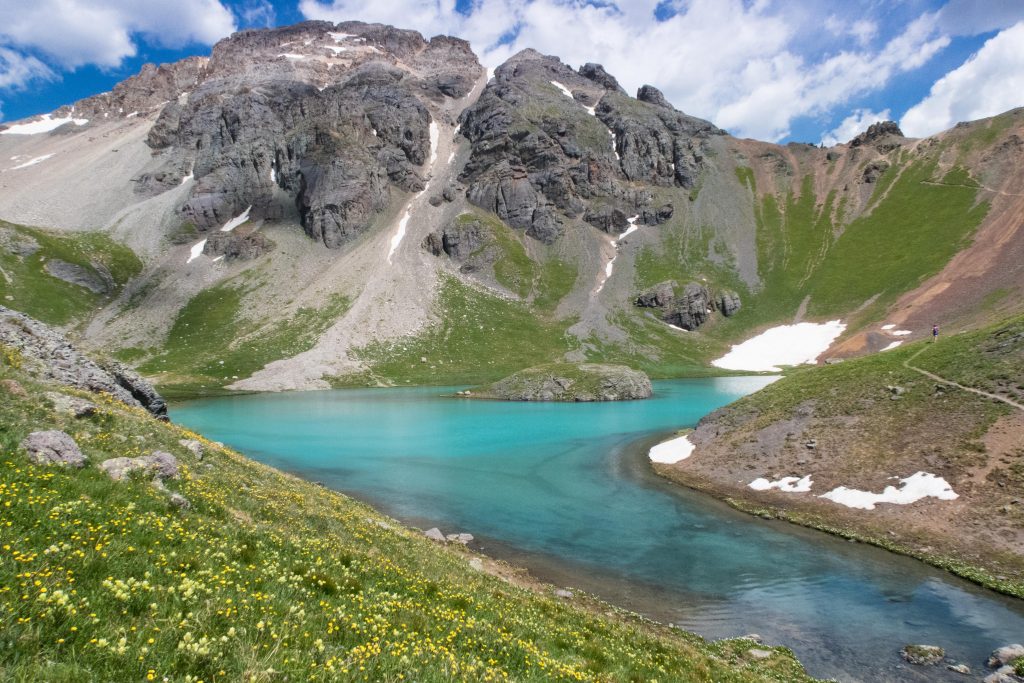 Unfortunately, we were still in for some news: our group wasn’t at Island Lake either! Where in the heck were they? Jen, Janelle and I reconvened and agreed they must have hiked up to Grant Swamp Pass. The pass towers behind Island Lake and is a tough climb for Hardrock runners. The day previously, it had been suggested to us that we hike up there to get an overall perspective of the Hardrock course, in addition to the magnitude of the San Juans. Since we had all thought it sounded fun, we assumed our group was up on top of the pass.

So….off we went, once again! 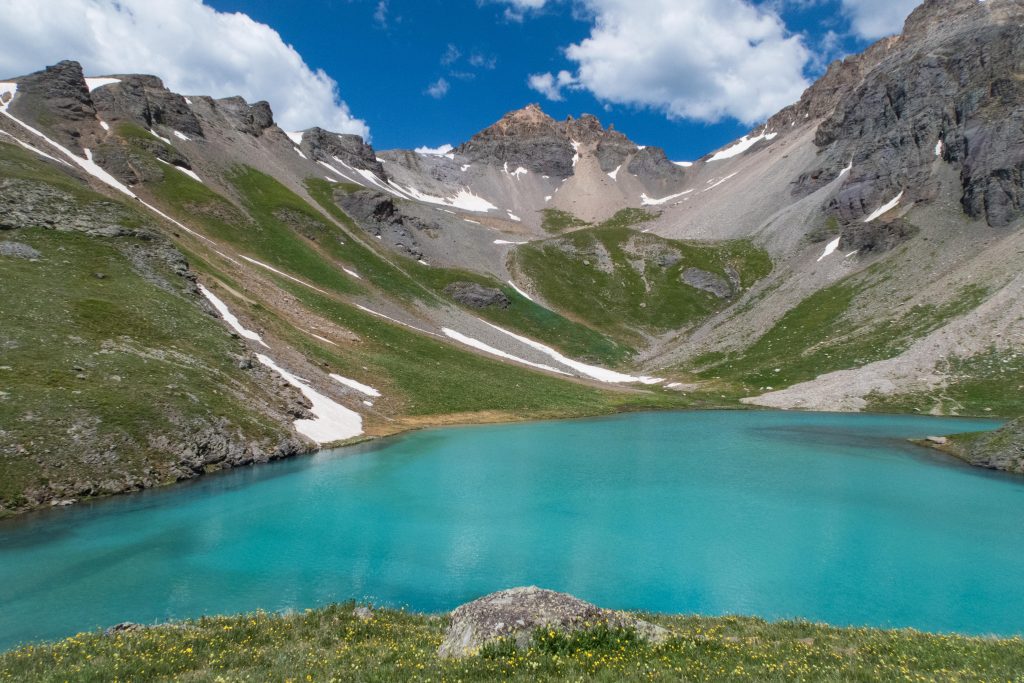 The trail up Grant Swamp Pass is sporting. It starts out fairly solid as it crosses some colorful scree fields. But it eventually fades away into a slippery-slidey mess of loose dirt and rock. Going up wasn’t the problem…but coming down posed a challenge! 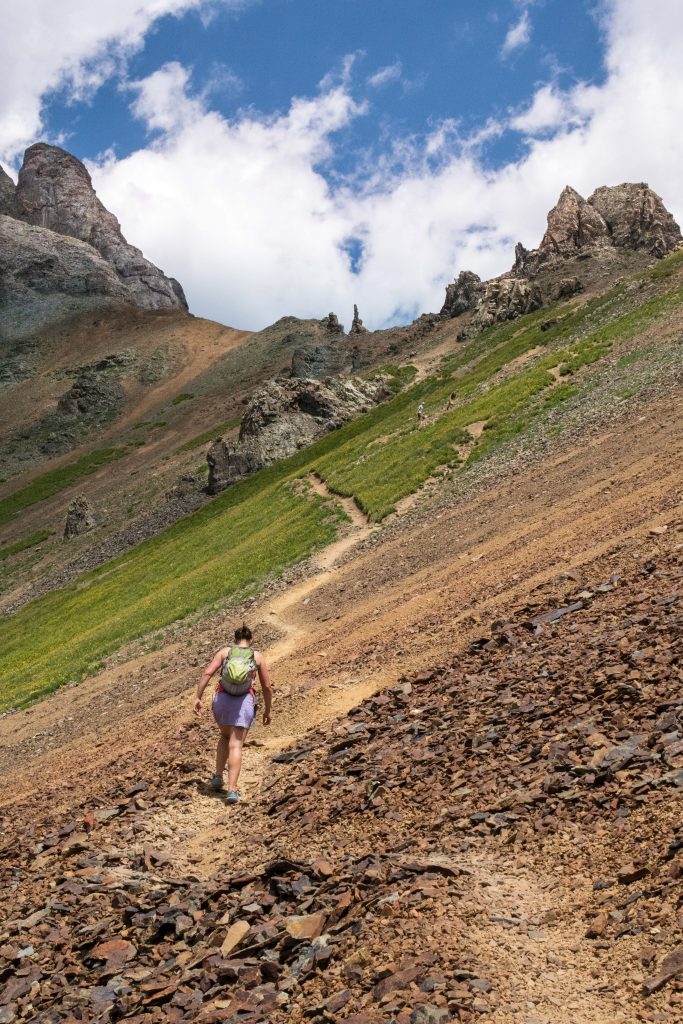 We crested the pass and–to nobody’s surprise, at this point– found ourselves alone. Our group was not there. We took a few minutes to enjoy the views and admire the descent the Hardrockers tackled after the pass, and then dropped back down into the basin. 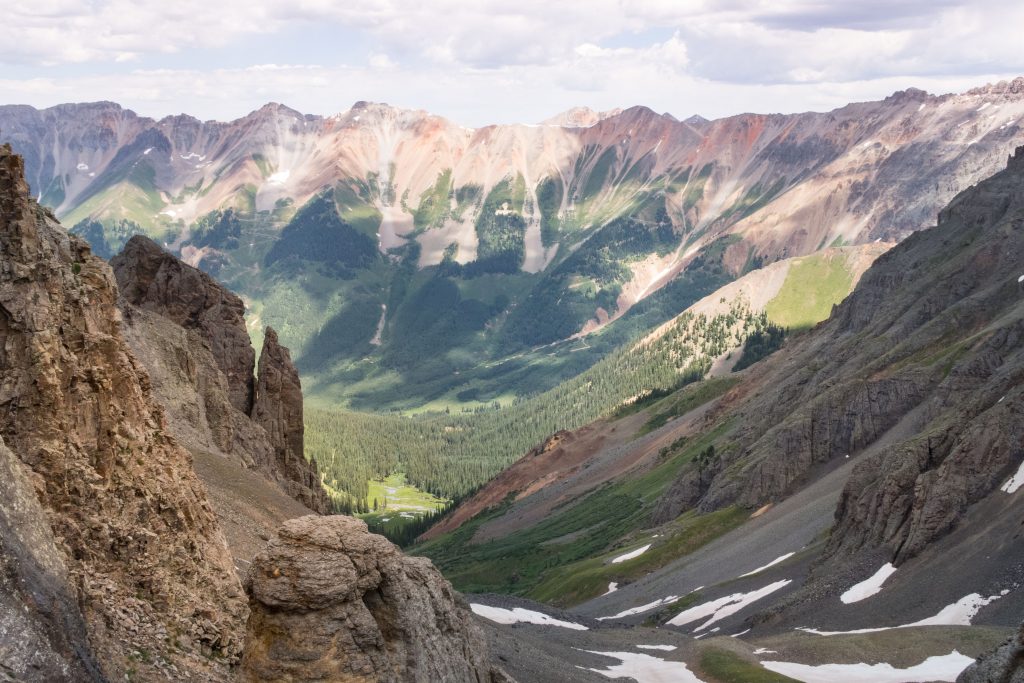 Coming down Grant Swamp is not for the timid! Personally, I preferred my tried-and-true crab walk method, using both my hands and feet to crawl down the slickest sections. I figure it keeps my butt close to the ground so if I fall, no harm done!

Eventually, we completed the entire loop and met up with the rest of our team back in Silverton. Naturally, they were worried about since we managed to be a solid two hours behind them….ooops. But, it was one hell of a beautiful day, so I can’t say that I minded “getting lost!”

A Look Inside the Hardrock 100