Over the past year, I have bounced through running shoes like Kim Kardashian bounces through boyfriends. Back in the day, I relied on my trusty Brooks Adrenalines until I discovered the Pure line. Then, I found the Mizuno Evo Cursoris followed by the Wave Rider 16s and Wave Sayonaras. I loved some instantly, didn’t completely hate any of them, but overall preferred a few: the Pure Cadence, Mizuno’s (now defunct) Evo Cursoris, and ironically, the Wave Rider 16. 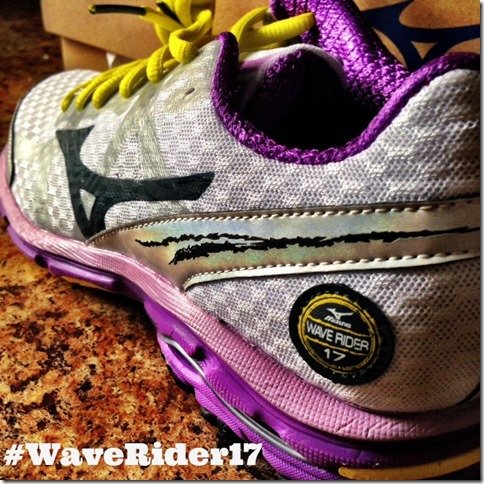 So, when I received the opportunity to give the new Wave Rider 17s a shot, I was curious. This is the first time in awhile that I have worn the same shoe in two consecutive models, so I wondered if I would notice any changes. And you know what? I definitely did!

Mizuno has done a hell of a job in cutting the weight of this shoe! At 8.8 ounces, the WR 17s are super light, especially for a traditional (not minimalist) running shoe. If memory serves, they are almost an ounce lighter than the WR 16s, and this is a definite plus for me. As y’all know, I tend to trend towards minimalist shoes with a splash of traditional footwear thrown into the mix, so a lighter shoe is perfect.

My initial run in the WR 17s was while I was at Cedaredge over Thanksgiving. The cabin is on the side of the Grand Mesa, so you have no choice BUT to run up a hill! I did two miles straight up the Mesa (650 elevation gain) before turning around and enjoying the easy two mile descent. During that time, I specifically noticed that the shoes felt very light and not-at-all clunky like I have come to expect in some traditional running shoes. Score! And, just like with the WR 16s, I totally love the cushiony bounce that comes along with this model. I still think the Wave Rider series is my favorite among all of the traditional running shoes I’ve worn! 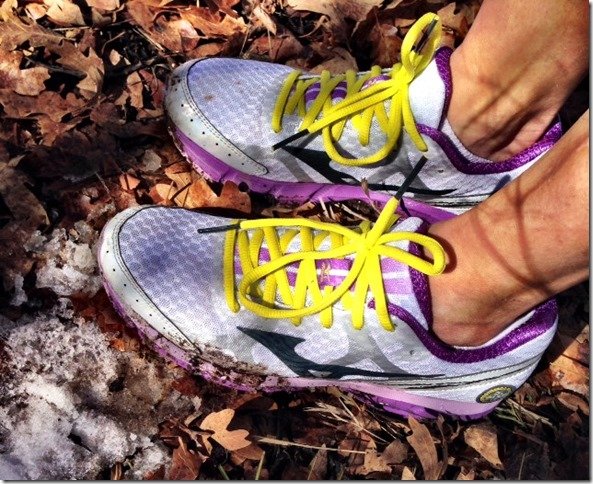 When I initially mashed my foot into the shoe, I had a flashback of the first time I tried on the Wave Sayonaras in June. The toe box wasn’t narrow, per se, but it definitely felt a bit more snug than I’d prefer. I wiggled my toes for a bit and realized it wasn’t necessarily the width of the box that I was noticing; instead, it was the height. I almost felt like my toes were being suffocated by a low ceiling or something! (Is that weird?!)

Honestly, I expected this to be a huge problem once I started running, but in reality, I never noticed that tight feeling again. My guess? I know that Mizuno redesigned the upper to make it more sleek and seamless, in addition to cutting weight. Maybe this “tightened” the toe box a bit? No idea really, but in the end, it didn’t matter. To date, I’ve only only run 9 miles in the shoes (including some trail time with Tals!), and that initial feeling has not been a problem. I’ll check back in next month to give y’all an update after I’ve logged some more miles! 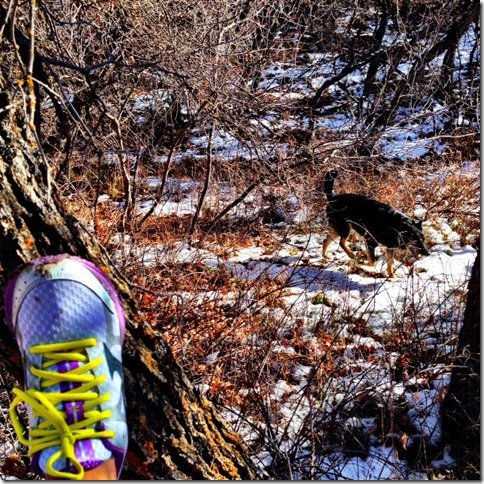 Trying to convince Tals to come back and run with me!

If you’re already a Mizuno fan who loves the Wave Rider series, you won’t be disappointed with the 17s! If you’re a runner who loves traditional shoes but is looking for a lighter feel with serious cushion, definitely check these out. I suspect most people will be happy with them!

Are you a Mizuno fan? Are you brand loyal with your shoes?