**The following post is sponsored by FitFluential on behalf of Mizuno**

Guys, the shoes are  offered in pink. Do I even need to bother with the rest of the review?! 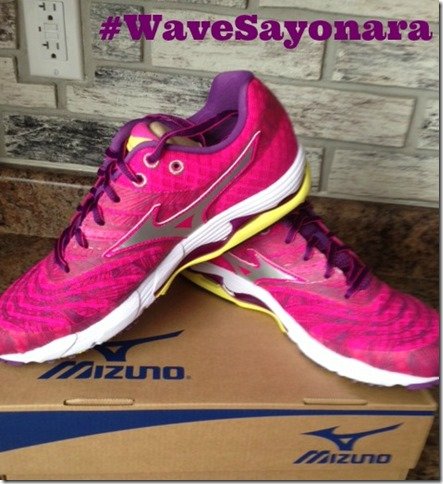 For those of you who apparently don’t make all of your running shoe choices based on color (just kidding! Sorta…), let me give you the details. According to Mizuno, the Wave Sayonara are like a love child combination of the Elixir and the Precision. Now, I’ve never tried either of those shoes before, but everyone and their grandmother has referred me to the Elixir, so it seems to be a pretty popular shoe! For me, I was mostly interested in trying out the Sayonaras because I am still looking for a fairly cushioned shoe to round out my running rotation. I love my Mizuno Evo Cursoris for my zero drop shoes and my Brooks Pure Cadence for my 4mm drop, but I’m still searching for that perfectly cushioned shoe. I’ve spent a fair bit of time in my Wave Rider 16s, and while I really think they are comfy, they have a but TOO much cushion for my taste.

Right off the bat, I was digging the lighter weight of the Sayonara. They clock in at 7.1 ounces which is pretty good for a shoe that has a 10mm drop from heel to toe. I also really liked that the heel/toe height was 19/9mm instead of the more traditional 24/12mm heights of the Wave Rider. No, it’s not anywhere near a minimalist shoe, but it’s exactly what I’ve been looking for in terms of a “cushioned” shoe. And, did I mentioned how light it is?! I’m convinced that means I’ll be fast like a cheetah!

Clearly, the Sayonara shoes are so fast that even technology has to slow them down a bit!

I also noticed that the Sayonara had an interesting tread pattern on the G3 sole that actually makes them a lot more grippy than I’ve come to expect from road shoes. I live by a lake that has tons of dirt trails that rarely require actual trail shoes. I tested out the Sayonara on those dirt paths and definitely noticed an improvement in the “stickiness” of my footing. 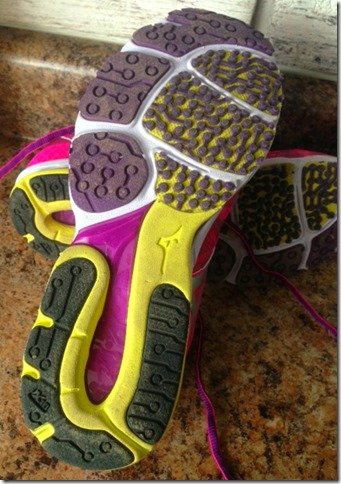 My only initial hesitation with the Wave Sayonara was the width of the toe box. I put them on immediately after they arrived and was a little bummed to feel that the toe box was a tad more snug than I usually prefer. Because of this, I wore them around for two days while doing errands, hoping that they would loosen up just a tick. And you know what? They did! They still aren’t as wide as I would love them to be, but that is also just a function of my feet. I have feet that just continue growing, and with my bunion issues, they tend to run a little wide. However, I definitely wouldn’t say that they Sayonara shoes run narrow—they just aren’t extra wide! (I know Christy thought they actually ran a bit loose!)

To date, I’ve only run a total of 12 miles in the Wave Sayonara, which hardly makes me an expert on the shoes! I can say that I am totally loving the lightweight feel and ease of stride, in addition to the snazzy color choices. I plan on working them into my running shoe rotation over the next couple months because I’m pretty confident that I may have found a good fit!

Do you own any Mizunos? I ask because I feel like they are a company that is growing dramatically, but it was all via grassroots support. I’d never even heard of them a few years back, and now I can honestly say they make some of my fave running shoes.

The Run from Hell