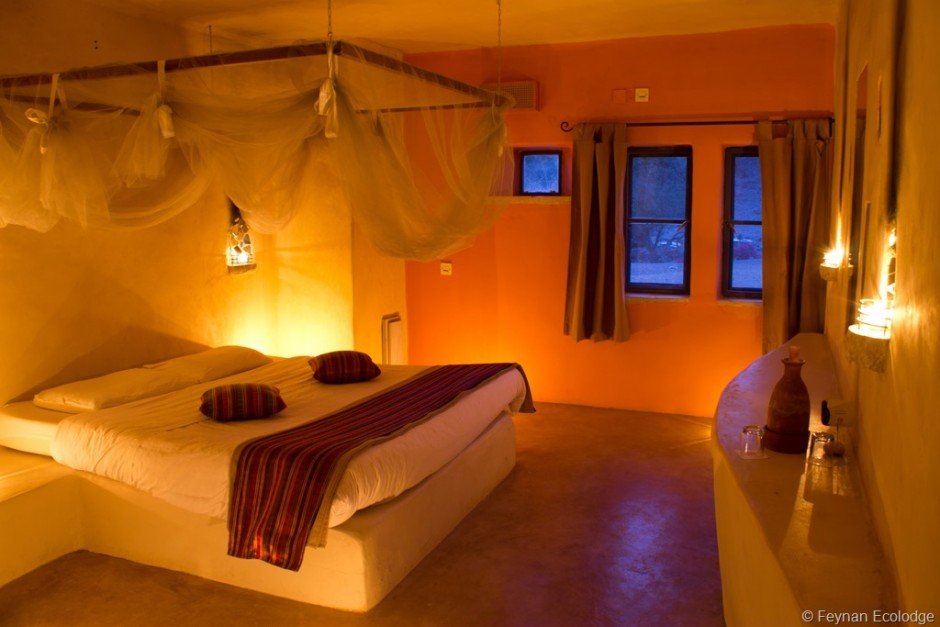 After leaving Amman, we quickly headed to the Feynan Ecolodge. I was ecstatic because, unlike the others, I had already heard about Feynan from Will. It was part of his itinerary in November when he went to Jordan with Backpacker, and he had Facetimed me from the downstairs lobby. I remember seeing the ambient glow of candles behind his head while talking to me and thinking that the lodge looked absolutely beautiful. 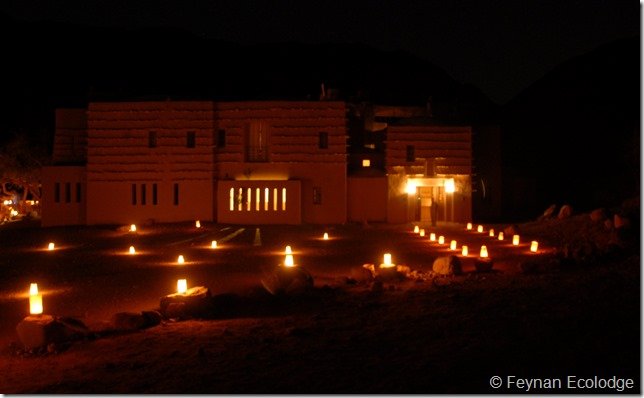 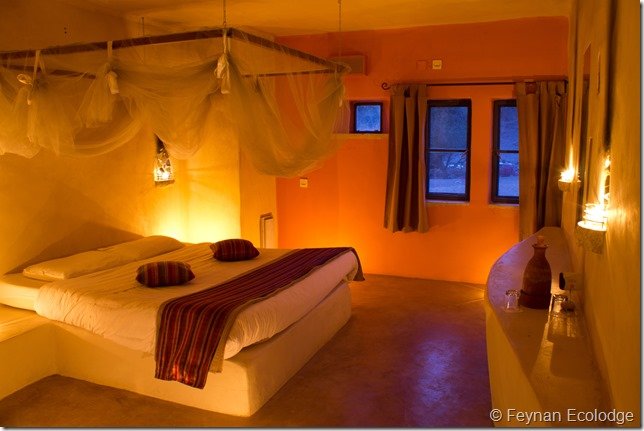 And you know what? Feynan did not disappoint! The entire lodge is “off the grid” in the sense that they rely on their own materials entirely. The majority of the lodge is lit by candles at night and the small bits of electricity {in the bathrooms, for example} come from Feynan’s own solar panels. They use solar heating for the water, they recycle all waste and compost scraps, and strive to use reusable material. My favorite part? They hire local Bedouins to make the bread, act as guides for nearby hikes and drive tourists to the lodge. In short, Feynan truly believes in hiring locally and investing in the nearby economy. Loved that!

After a solid night’s sleep, we geared up for a day of adventure: our guide, Mohammed, and the guides from Feynan were taking us on the 15km trek through Wadi Ghwayr. Traditionally, Wadi means “valley” in Arabic, so I guessed we’d be exploring some canyons…but I wasn’t prepared for the insane beauty of Wadi Ghwayr! 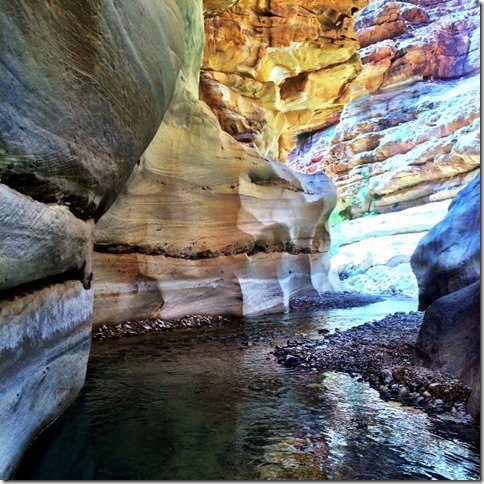 Once we entered the narrow entrance to the canyon, the towering cliffs shot upwards and pools of cool water collected around our feet. Hanging gardens draped over the tops of the steep walls and droplets of moisture flew down until they landed on our burning heads. Since it was early in the season, there was still plenty of water left in the canyon and we initially walked alongside the river. However, as we hiked deeper into Ghwayr, the water grew deeper, requiring us to do a fair bit of wading. 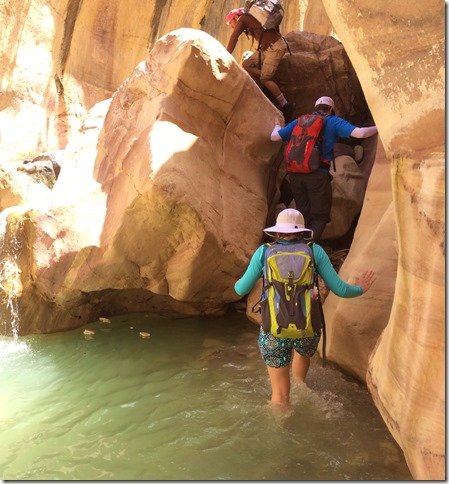 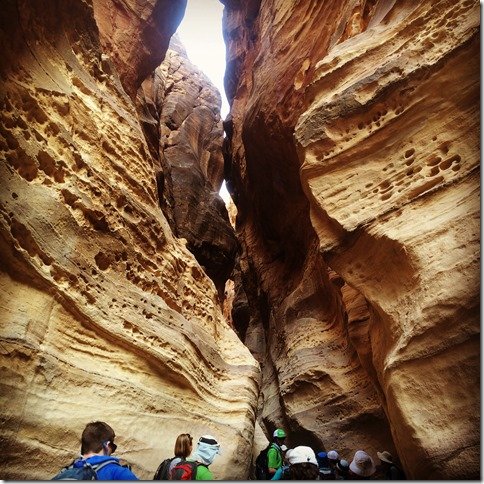 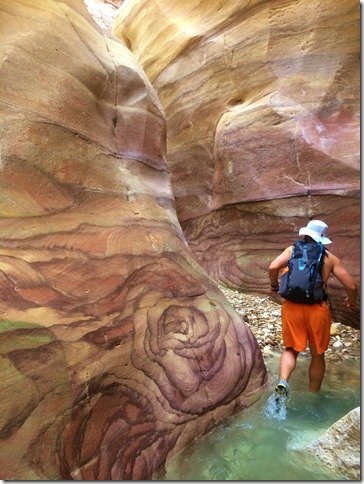 Our guides were fantastic and I enjoyed learning bits of local lore from them. They made us traditional Bedouin tea on our rest breaks {think: insanely sweetened tea!} and even taught us how to make traditional Bedouin bread. What is that, you may ask? Basically, our guide took some flour and water, rolled it into a dough ball on a river rock, and then flattened it into an oval. Then, he buried it in the sand alongside some hot coals and let it cook in there for a few minutes. He then removed it from the earth, banged it against a rock to shake off the grains of sand, and voila! It was snack time! 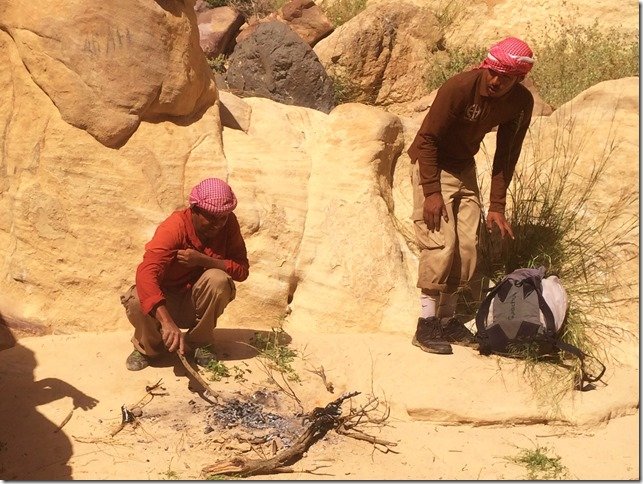 There is some bread cooking in that sandy fire! 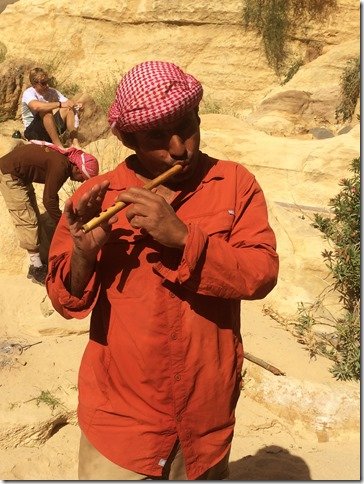 After munching on the bread and the sugary tea, we finished trekking through Wadi Ghwayr and found our pickup trucks on the other end. We were all hungry and tired but felt so completely happy. It was our first day of outdoor adventure in Jordan and it had been a flipping blast. Who knew what was next?!

Have you ever been in a slot canyon? Maybe in Utah?

Where in the World Would You Go?