I’m not huge on cities, and I typically avoid them while traveling. Sure, I’ll pop in and out to check out the must-see stuff, but for the most part, I find them chaotic and overwhelming.

So what did I think of Amman?

Our trip started quickly on Monday morning as we spent two solid days exploring the city and its nearby sites. Our guide, Mohammed, first zipped us off to the Greco-Roman ruins of Jerash which, truthfully, I didn’t even know existed. Located 30 miles north of Amman towards Syria, it completely blew my mind that such a beautiful historical site could go largely unknown in the Western world. They are the second most-visited site in Jordan behind Petra, and I had never even heard of them. What the what?! 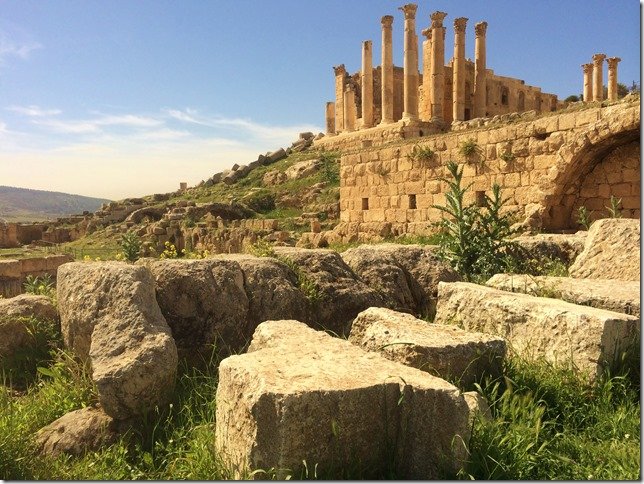 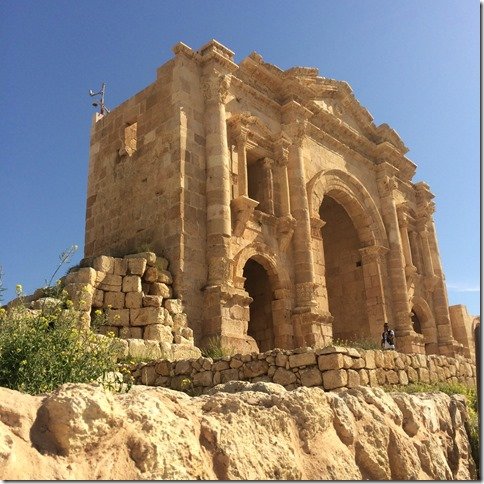 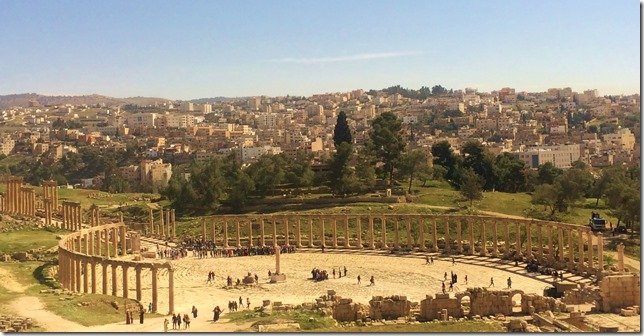 We spent the majority of Monday wandering through the sites and listening to Mohammed’s detailed explanations of the history. However, my favorite part of the entire day was definitely the kids! Apparently, all-girls schools visit the site on Monday, so there were pre-teen gals running around everywhere. I can only assume that they don’t see Western woman all too often because those gals were completely enamored with Beth, Erika and myself! I lost count of how many of them stopped me to take a photo, and their smiles and energy were completely contagious! Dozens of them would surround me, grabbing my hands or touching my exposed hair, flashing gigantic grins for the camera. I’m not sure if the girls took the photos home to show their families, but there are dozens upon dozens of photos of me now floating around the city!

Tuesday began with more time in the city, although I knew it would be our last day in the hustle and bustle of the crowds. While we all fell in love with Amman, you could definitely tell we were an outdoors crew: we were itching to get “outside” for adventure! 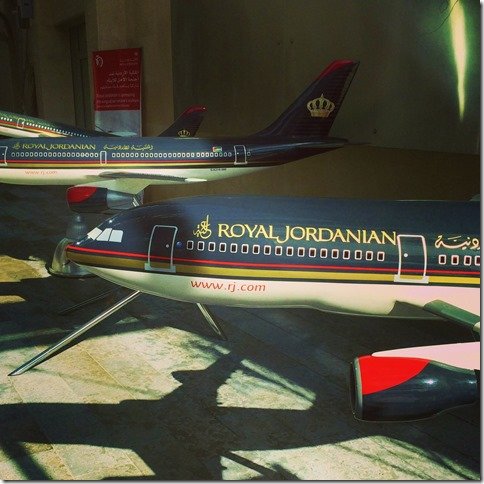 The day began at Royal Jordanian, a beautiful new building that crested the skyline in the newer part of Amman. The airline was a massive sponsor for this trip since they covered all of the plane tickets, so I was very appreciative of the opportunity to express my gratitude. I mean, that’s one hell of an expensive ticket and I still can’t believe they were willing to do that! 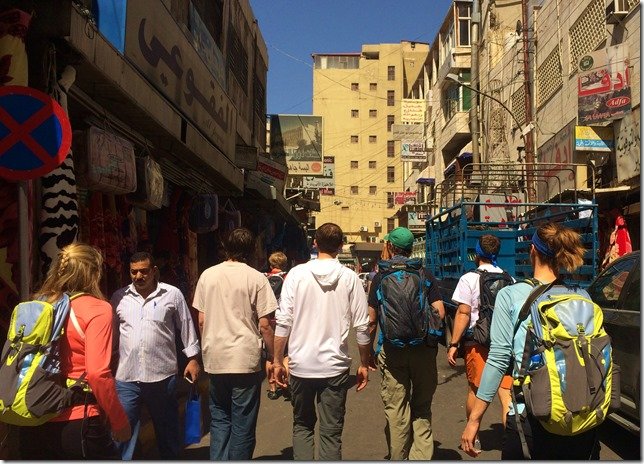 We really blend in with the locals, don’t we?!

We then headed into the older part of of Amman and ventured into the souk, an open-air marketplace that is common in the Middle East and Northern Africa. I’ve been to plenty of markets like this but they never get old! The vibe is so alive and I always feel an air of curiosity and energy while checking out each vendor’s items. I was enamored with the huge bags of spices and large vats of produce! 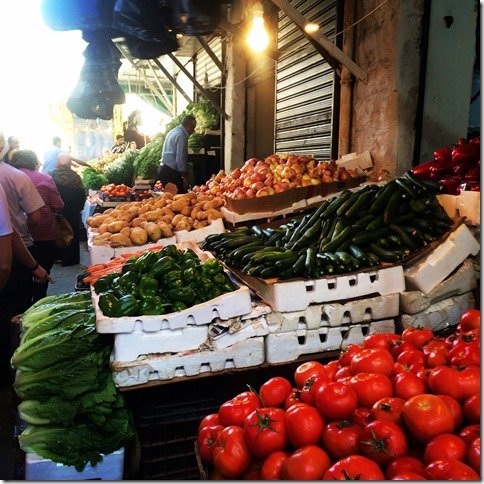 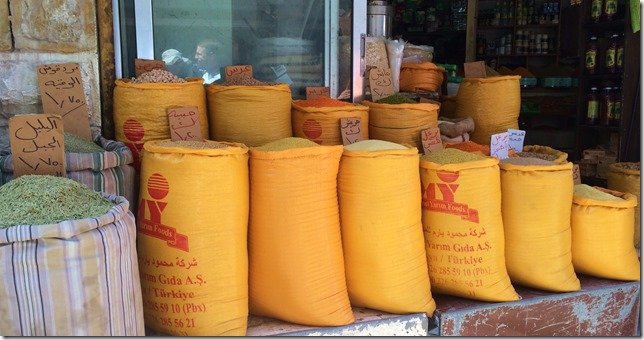 Our crew descended on various booths, sampling items and buying bags of treats. Mohammed introduced us to green almonds, a fuzzy light green almond, and I munched on those for a bit. They had an oddly fresh taste that reminded me of almond with a more gelatinous center. I also inhaled bags of dates with zero remorse. Fortunately, I’ve had stomach issues enough while traveling that I’m pretty immune to almost anything, so I wasn’t concerned about eating market food—I knew my iron-lined intestines could take it! 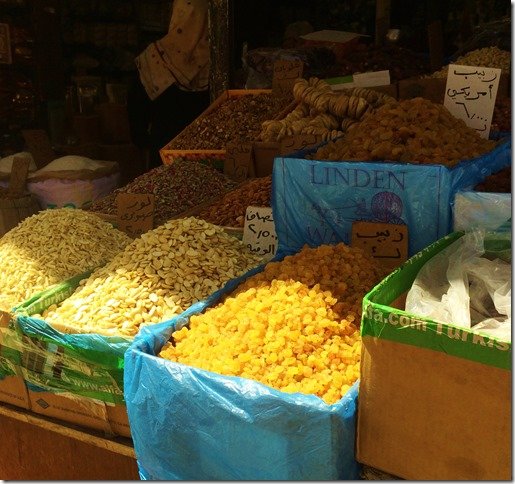 I continued to eat my way through the city and was psyched when Mohammed took us to a vendor who sells his favorite dessert: knafeh. It’s this Levantine cheese pastry that is soaked in some type of sugar-based syrup, and the combination of cheese and sweetness was off the hook! I suppose I could have shared my pastry but true to form, I threw the entire delight down my throat. I’m not one to waste dessert! 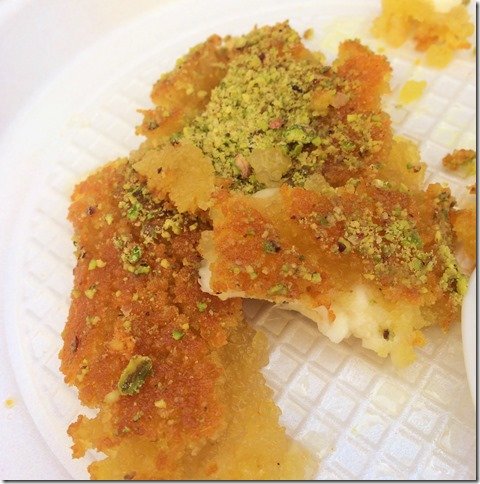 After filling ourselves to the brim on various snacks, it was time to head out of the city. Our itinerary was still a mystery to the OmniTen {although all of the Columbia peeps and film crew knew everything!}, so we just hopped in the bus and pressed our faces to the window. I completely trusted that, regardless of where we were headed, it was time for some adventure!

Is eating the local food one of your favorite parts of travel?

Back in the Good Ol’ USA