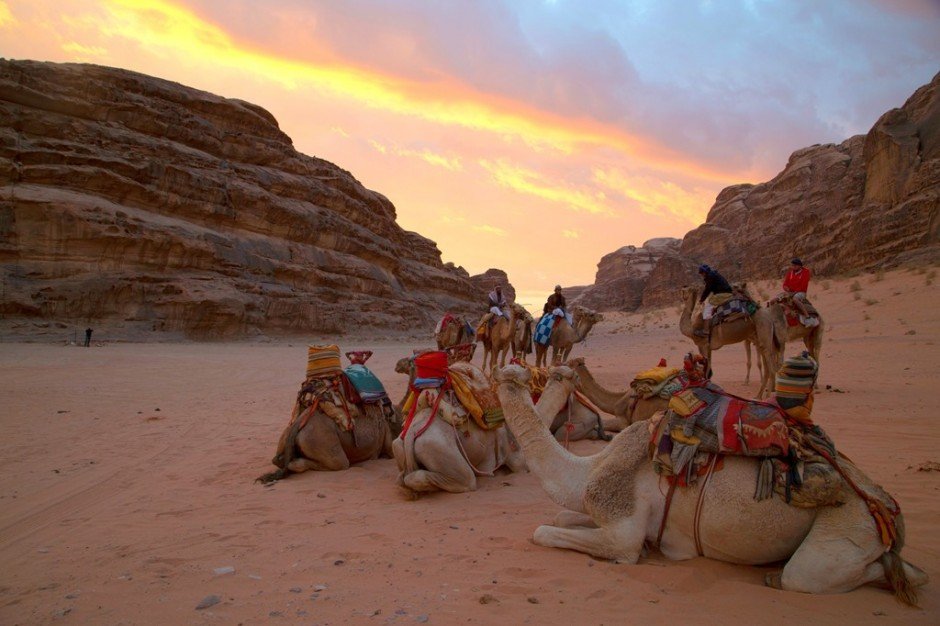 To catch the rest of my Jordanian stories, click here, here or here.

While some in our group were the most excited for Petra, I was oddly anticipating Wadi Rum. I’ve seen photos for years of the landscape’s ethereal beauty, so I was psyched to learn that we would be visiting Wadi Rum before I left for Bali. YES! I wasn’t going to miss it!

Our bus lumbered down a dusty road before depositing us at a roadside stand. We found out later that this was the meeting place for groups staying at Captain’s Camp, but at the time, it sure seemed random! We all stood outside in the sun, commenting on the insane heat and covering every bit of our skin in sunscreen. That desert sun was sizzling!

After piling into the back beds of various trucks, our crew set out for the desert. I quickly learned that there weren’t “real” roads in Wadi Rum; instead, we trusted the inherent navigational skills of our Bedouin guides. They clearly knew the valley like the back of their hands, so I just sat back and enjoyed the stunning scenery. We made a brief stop at a welcoming tent where a few of us decided to race up a massive sand dune. As you can imagine, the sprint smoked us and it really made me think about getting lost out there somewhere. The sand dunes are deceptively huge! 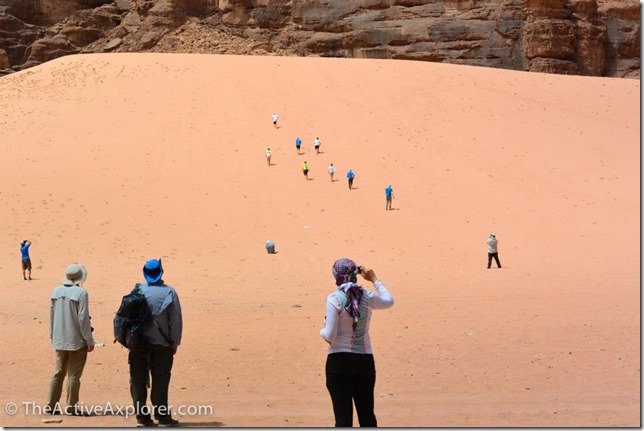 We kept driving through Wadi Rum, enjoying the scenery. The towering sandstone cliffs almost made me feel like I was on another planet or something. The harsh color of the rock against the soft sand of the desert was a powerful contrast. I was in a truck with Seth, Casey and Jon, and fortunately, we learned that our driver was THE MAN! I think he gunned the engine once, and after he heard us cheer in response, he became like flipping Mario Andretti! He was launching over cliffs and spinning us in circle. Jon, Casey, Seth and I just held on tight and laughed; it was seriously the best truck ride ever! 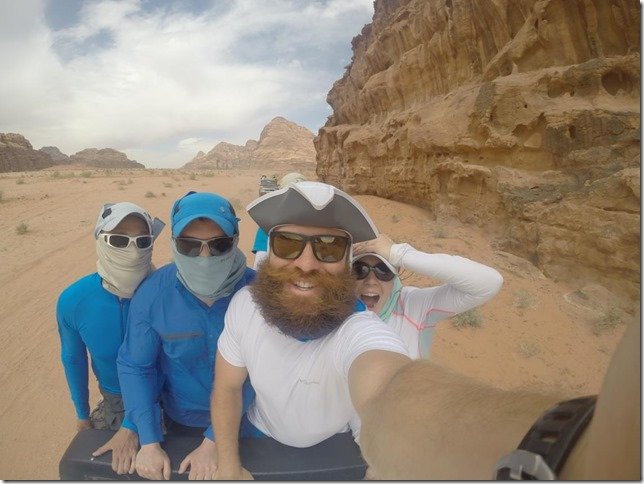 We eventually stopped our truck-racing ways for lunch and we learned of the afternoon plans: two different hikes existed, and while both were to rock bridges, one was significantly longer than the other. I had hoped to check out the longer hike, but since I was leaving that evening, I had to stay behind to do some interviews with the camera crew. Fortunately, Scott, Erika and Casey and I had a fantastic time exploring the area! 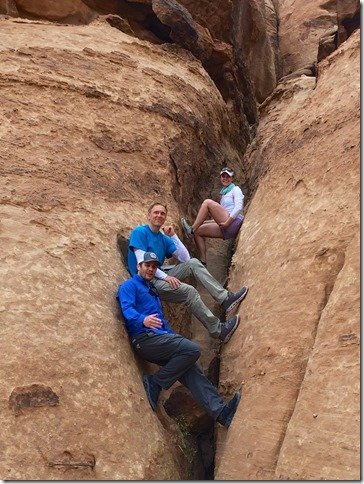 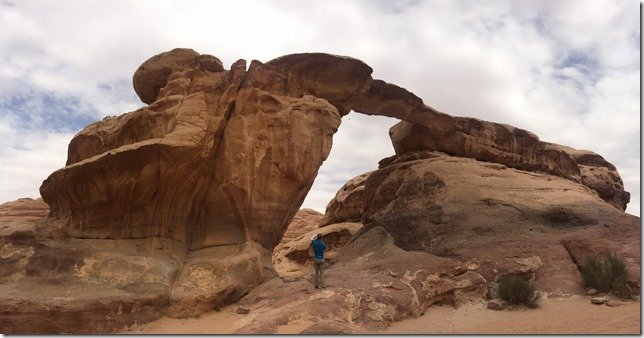 The sun began to set on the day and we climbed back into the truck so our driver could take us to our final stop of the evening: Captain’s Camp. Captain’s Camp is a desert camp in the protected area where tourists can spend the evening. Our truck arrived first and I scouted out the camp while the others claimed beds. Since I knew I was returning to Amman late that evening, I didn’t need a bed…so I had plenty of time to take photos! 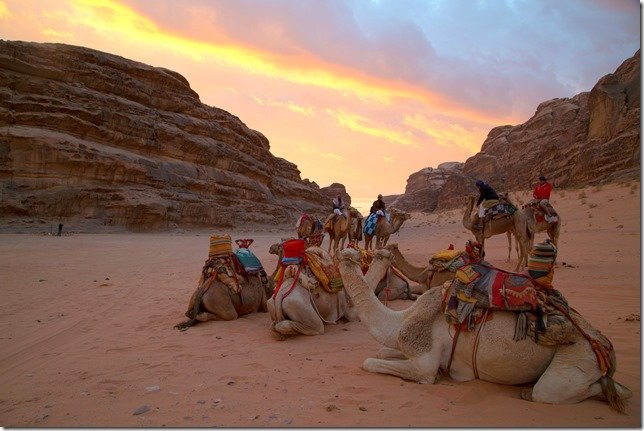 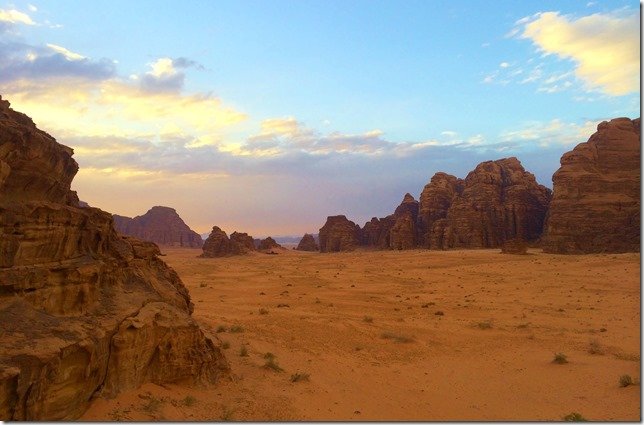 I soaked in the views as the sun dropped below the horizon, illuminating everything with a rusty orange glow. Eventually, I had to leave my perch on the top of the rocks so that I could go down and do my final interviews with the camera guys. Everyone else was staying in Jordan for three more days, but I had a driver coming for me that night. I spent a few hours with Pedro and his camera crew before catching a quick bite with the OmniTen. Stuffed to the gills, I hugged everyone goodbye and climbed into the first of many cars that would get me back to the city. 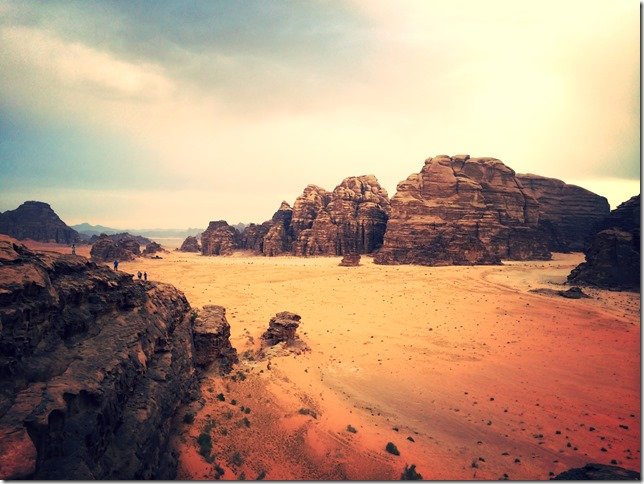 Truthfully, I was slightly nervous that something would go wrong and I wouldn’t make it back to the city in time for my flight. I left Wadi Rum around 10pm on Saturday night, and while my flight wasn’t until 9am the following morning, I wasn’t too confident. Mohammad, our guide, told me that one truck would grab me from Captain’s Camp and take me back to the main road. Then, he would find the bus driver and get him to open the bus so I could grab my luggage. Once that was accomplished, we would then track down a third man who was my driver for the three-hour journey back to Amman. Once there, I was supposed to check in at a hotel near the airport where hopefully, my room would be waiting. Sounded too complicated to work, you know?

Of course, I should never doubt Columbia and the Jordanian Tourism Board because the plan went off without a hitch! My cab driver was a sweet older gentleman who told me I could just sleep through my three hour drive: “You don’t want to be tired for your flight in the morning, young lady!” I even awoke halfway through my car ride to find myself covered in his jacket. Apparently, I was shivering from the cold AC and he covered me up with his coat. Jordanian hospitality at its finest!

And so, while the trip continued for the rest of my fellow OmniTen, my time in Jordan was done. I was sad to see the beautiful country go but I am so thankful for the opportunity to visit a country so different from home. I learned a lot about the Middle East but most importantly, I was reminded of the rampant stereotypes of that region. Sure, there is some craziness over there, but it most definitely is not in Jordan! If you get the chance to visit the country, please do—I promise you won’t regret it!

What is one place in the world you would NEVER want to visit? {Assuming safety concerns aren’t an issue anywhere…that’s cheating!}

Some Randomness From My Life