How Do You Know When You Shouldn’t Be Skiing?

When the universe sends you 4,000 messages….that’s how!

Against my poor body’s wishes, Will and I headed up to Breckenridge this past Friday to meet up with our friends for our planned ski weekend. Will was fortunate enough to get off work early, so we hit the road around 2:30 in hopes of beating all of the weekend traffic.

Um, good thing we did! Apparently, cops tried to arrest a drunk driver around 3:30pm and he took off, leading them on a slow-speed chase up the interstate. When he ran into traffic, he chose to ram all the cars around him instead of stopping. Finally, police officers had to shoot him to get him to stop, which obviously led to the closure of the interstate for the rest of the night. Will and I were 30 minutes ahead of all the chaos so we rolled into Breck around 5pm without any concerns. Sadly, the other half of our group was behind the accident and got stuck sitting in traffic all night. They didn’t reach the condo until midnight which meant that the 90 minute drive turned into a six hour debacle! 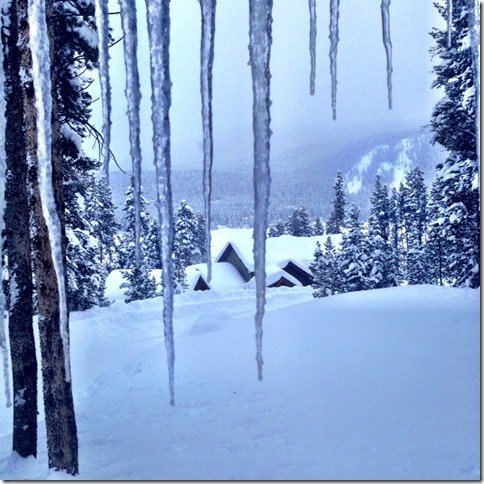 Regardless of the bedtime, Saturday dawned bright and early and covered with snow! I still felt like hell, but when the biggest powder day in the past five years rolls through town, you suck up the sickness and ski anyway…right?

Well, at least that was my intention! Since my replacement skis have yet to arrive, I had brought my K2 backcountry skis with me. No big deal, and they’re definitely fatter than my carving skis so I was excited to use the GotBacks in all the fluffy pow pow (Side note: I hate the expression “pow” or “pow pow.” As long as I’ve been a skier, I still think they are stupid pretend words!) Will and I hopped in the base gondola at Keystone, chatted through the five minute ride to the top of the mountain, and began stepping into our skis. Yay powder day!

I easily clicked my toes into my bindings, but when I went to step down on my heel, I realized I was standing directly on the ski; I was about an inch short of the actual binding. Immediately, I realized my idiotic mistake: I had completely forgotten that I had exchanged my boots a few weeks ago for a significantly smaller pair. My new boots are so much smaller that I needed to get my bindings adjusted to fit the new size…and I had completely spaced that out!

Y’all, I about lost my shit. You know when you are sick and everything seems so much more dramatic than it really is? I was in that frame of mind. I was livid at myself for making such a stupid mistake, and grew even more mad when I realized there was nothing I could do to fix it in time to get myself on the mountain that day. I could go into the tech shop and have them move the binding, but since I’m getting new ones, I really didn’t want to have new holes drilled in my skis for bindings that were only going to last a week. Talk about a #FirstWorldProblem, no?

I told Will to enjoy the snow without me and stomped back to the gondola. Of course, because he is the sweetest man alive, he met me at the base after skiing that single run, saying that riding without me wasn’t any fun, regardless of the THREE FEET OF POWDER. Instead, we spent the afternoon searching out rental skis so I stood a chance of getting on the mountain the following day. 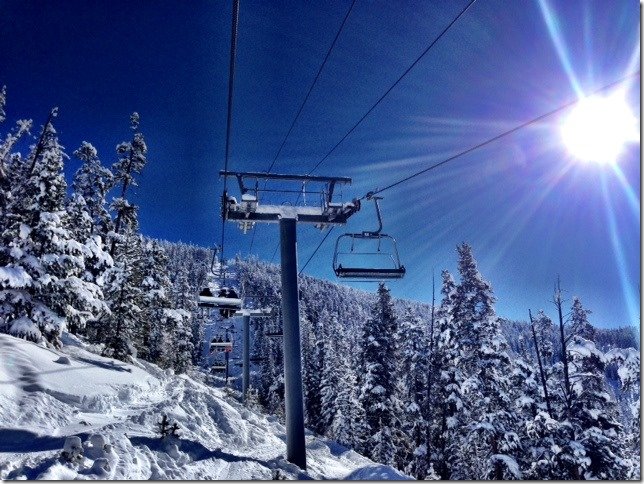 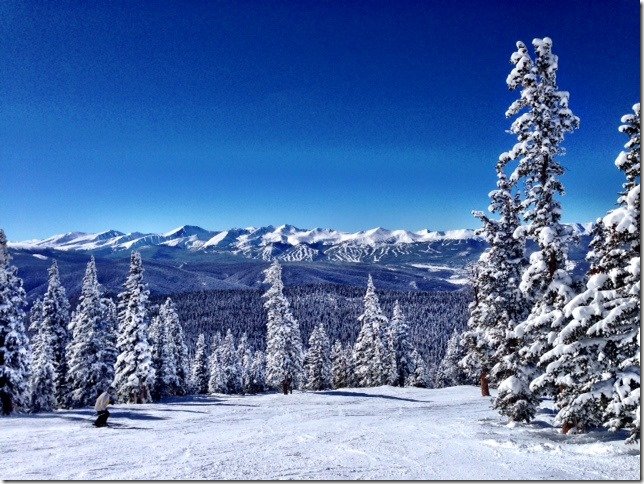 So, we tried again on Sunday! I still felt awful and two nights of minimal sleep weren’t doing me any favors. However, I was adamant that I would ski this new snow! We headed back to Keystone and luckily, everything went according to plan. And y’all? It was so worth it! 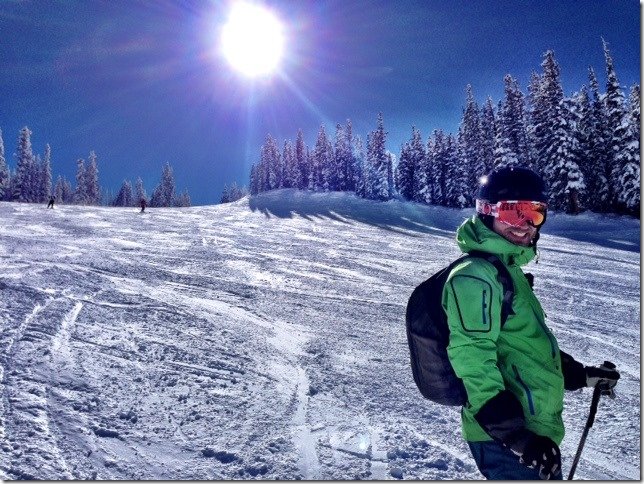 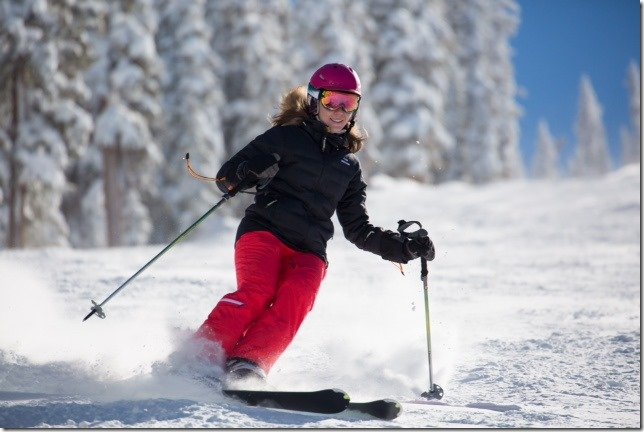 Will snapped this photo of me skiing…love my new snowpants!

Because it was Super Bowl Sunday {cough, cough—did you forget there was a game on Sunday, Broncos?}, Keystone was deserted and lift lines were minimal. I quickly realized my body was so worn that I wouldn’t be skiing hard, but I could handle mellow blues and some easy black runs. Some of our friends caught the cat into the back bowls and for a hot minute, I thought about joining them…but then I remembered how a single black run of moguls had left me exhausted for like 10 minutes. There would be no bowls for me that day! 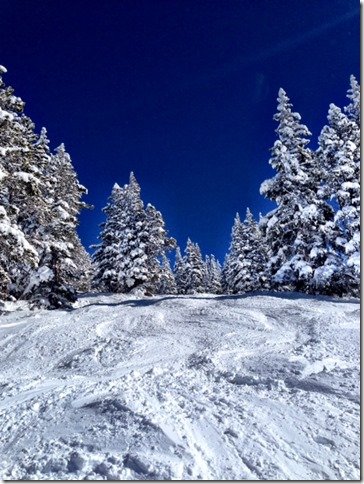 It didn’t matter though—the conditions were so fantastic that the entire mountain was fun to ski. We played in the trees and bombed down some groomers. We met up with like-minded friends like Heidi who didn’t care that a big football game was happening—today was a powder day! In the end, we skied 15,000 feet which wasn’t a lot for such a perfect day, but it was the max my body could handle. And it was so worth it to get outside!

Now, onto the not-so-fun story: my health is still all out of whack! After last week’s doc visit, he put me on cephalexin, a high-powered antibiotic that was sure to knock this nonsense out of my system. Unfortunately, after four days of taking a double dose of these meds, I didn’t feel a single iota better. So, I called the doc on Monday to see where we go from there.

Next up? Blood work. I went in that afternoon to have my blood taken so that they could test for mono and other abnormalities in my blood cell count. Honestly, I was super nervous that this debacle would be mono since the symptoms totally remind me of my mono-bout back in 2007. Fortunately, my results came back normal so we ruled all of that out. The downside? They still don’t really know what’s going on with me!

As of last night, I’m back on new meds—the third kind!—and I’m really hoping these work. Taking all of these pills makes me feel like a flipping medicine cabinet, but I’m willing to do it to feel better. I’ve been planted on our couch since Sunday night and I’m seriously going stir crazy. Will even worked from home yesterday just to keep me company; I’m going out of my freaking mind over here! I’ve almost watched the first three seasons of Game of Thrones, and I’ve plowed through the first two books in the Study trilogy by Maria Snyder. {Thanks to Alyssa for that rec! Girl always knows what books will entertain me!} I need to be healthy!

If you’re local, did you get out there to enjoy this massive snowstorm?

When’s the last time you got sick? I feel like so many people are getting hammered this winter!

A Mysterious Infection & A Powder Weekend!

The Evolution of the Dirtbag