Let’s Chat About My Spine

Share
Tweet
Pin
Oy vey, y’all. Seriously.I mentioned last Friday that I was heading in to see a doc about my lingering back pain that has recently evolved into, “Holy shit, I can barely lean backwards or move around without wincing!” Needless to say, I was expecting him to give me some ART treatments, maybe prescribe some meds, and send me on my way.Yeah, that didn’t happen.

Turns out, things are a bit more messy and complicated than I originally thought. It all stems from this X-ray: 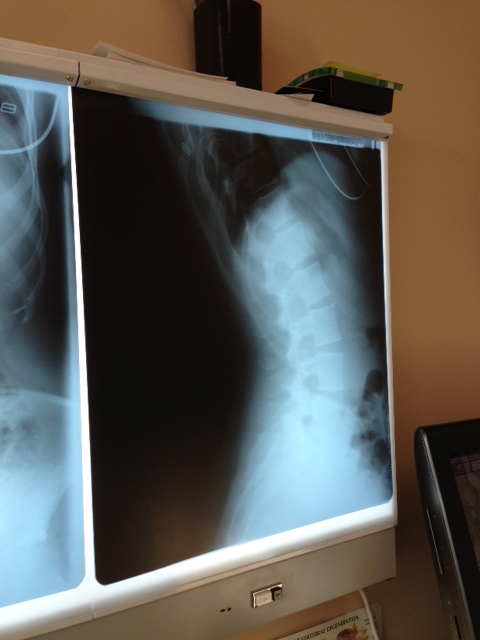 Curious as to what you’re looking at? I sure was. It took a full visit on Monday followed by another visit yesterday before I finally understood what is going on. There are a lot of technical terms that my doc has spent hours explaining to me, but I think I can finally sum it up for y’all (And if someone reads this and is like, “That is absolutely not what that means!” let me know. Highly possible.)

So, in short? My back is kind of jacked. Basically, I was born with a few birth anomalies that lead to the massively crooked lower spine you can see in the first X-ray. One of my lower vertebrae is slipping forward and the crookedness as caused a few bones to begin to fuse together in ways that they shouldn’t be. Because my body is being pulled so far to the right, the muscles on the left side have been dramatically stressed out for a good 30 years. Additionally, these muscles (including my Psoas) are running over bones that are turned the wrong way, so they have been gradually growing more and more irritated. Think about about driving a misaligned car: if you do it for 30 years, one side is really going to be really worn out, right?
According to my doc, nothing triggered my current state of intense pain and it was bound to happen at some point. In fact, he says it may have just occurred one morning while rolling out of bed. It’s that whole inevitability thing, you know?
In terms of treatment, I’m looking at a lot of stuff over the next one-two months, but everything is manageable. Currently, my back, left hip, and left quad muscles and tendons are ridiculously tight because of the strain they have been under. They’re fighting back and trying to pull the right half of my body towards them. This is resulting in the enormous joint pain in my vertebrae that triggered the initial visit. The first step is to eliminate this joint pain and inflammation via a series of stretches and active release therapy (ART). ART hurts like a mother but after two sessions, it seems to be working so I’m hopeful!

And yes, in my current state, some of these stretches really hurt…hence my faces!
After we get the inflammation down, the next step is to work on getting my spine back in alignment. Currently, it’s 12-15% off which is fairly high. He thinks we can get it back within 1-4% which means I would be a much happier camper!
The final issue that I am most concerned about is my left hip. I have experienced issues with it for years, stemming back to my dancing days when it was always sore and stretching my hip flexor was a requirement before any type of leaps. Even today, it always cracks very loudly when doing air squats (as anyone at Big Horn has witnessed!) I always assumed it was a bone cracking but turns out, it is actually a tendon in my hip. It’s been irritated as hell, to the point of developing that bone spur, and the doc says that I may be looking at some serious arthritis in the future. We’re going to see if fixing all of the other issues will reduce the strain on the hip, so keep your fingers crossed.
As of now, I’m on the “injured list” in regards to exercising. Doc has requested that I eliminate anything intense from my regime for the rest of December, at minimum. Thus far, Crossfit, long distance running, climbing, cycling, and hiking/backpacking have been removed my repertoire. If I tell him anything hurts, that gets added to the removal list, as well. To date, I’m stuck with the elliptical, possibly swimming….and walking. Yes, he suggested I make walking my workout. I’m sure y’all can imagine how happy that made me! I have yet to try out skiing or snowshoeing since my inflammation went crazy, so I’m really hoping that those don’t negatively effect me. I am going to be miserable if I’m stuck inside on a cardio machine for the rest of the month.
So, to summarize in case you didn’t want to read this massive novel:
********************
What’s the worst injury you’ve ever had?
Until this year, I have never been injured and always considered myself quite sturdy! That knee thing in August was totally bizarre for me, but a lot of stuff is starting to make sense now!
Share
Tweet
Pin

There Are No Words