Mistakes in the Outdoors

I’m teaming up today with nine other bloggers and Sierra Trading Post for a roundup of our favorite mistakes in the outdoors. I mean, let’s face it: Mother Nature comes with a serious learning curve, and sometimes it’s a steep grade that results in hilarity. Other times, you’re lucky to escape with your life! I debated which story to share {because trust me—I have plenty of them!} but in the end, I opted for a semi-serious tale of the perils of hiking sans map. Trust me; you don’t want to learn the hard way like we did, and if you only 4.2 seconds to read this, here’s the takeaway: carry a map!

Want to catch more mistakes in the outdoors? Join the #STPLive Twitter chat this Thursday at 6pm EST/4pm MST. The Sierra Trading Post chats are always entertaining, but I suspect this one will be especially good!

Back in 2002, I was just finding my outdoors legs, so to speak, and each weekend trip typically served up a side of humility with my main course of chaos. This particular weekend was no different! We had chosen to head up to Mt. Bierstadt and Mt. Evans, two 14ers located pretty close to the Front Range area. They are two of the easiest routes in the state and we had climbed both separately, but we were after a new challenge: we wanted to climb Bierstadt, cross the Knife Edge ridge between the peaks, and then summit Evans before heading back to the car. It would be our first class 3 route and we were looking forward to the challenge! 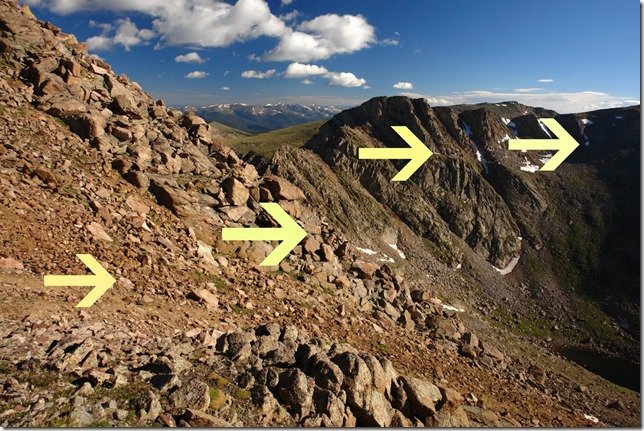 Ironically, summiting the two peaks and crossing the Knife Edge was the easy part of our day. We practically sprinted up Bierstadt and truly enjoyed picking our way across the ridge before hoofing it up to the top of Evans. Evans is a disappointing summit because there is a road to the top {highest paved road in the country!}, so you finally conquer the peak only to find busloads of tourists eating sandwiches and walking around the parking lot in high heels. Regardless, we crammed some food in our mouths, reveled in our accomplishment, and began the long trek back to the car.

We chatted as we hiked down the backside of Evans, not really paying attention to where we walked. Because we weren’t crossing the ridge again, we were taking a new-to-us route to get back to the car. We assumed it would be well-trodden and hadn’t bothered to do much research. The kicker? We hadn’t brought a map or the guidebook either. In short, we were completely relying on the hope that the trail would be so clearly marked that we couldn’t miss it. I’m sure you hear where this is going, right?! 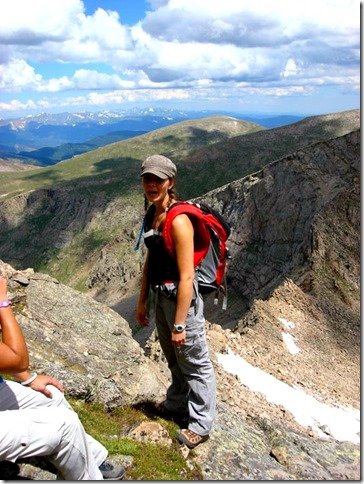 This is an old photo from the 2nd or 3rd time I crossed the Sawtooth. It’s seriously the least-flattering pic, but I feel I deserve that for being so stupid back in 2002!

After an hour of talking and walking, we realized that we weren’t really on a trail. We weren’t lost because we knew exactly where we were and where we were going, but it became clear that we had wandered off the beaten path and were merely ambling down the side of the mountain. We discussed our options and both agreed on a decision: we didn’t want to turn around and hike back up the mountain to find the proper trail. We were extremely tired after our long day and couldn’t justify the extra elevation gain. Instead, we’d just bushwhack our way back to the car and hope that we found the trail at some point. After all, what could really happen?

But, since we didn’t have a map, we kept wandering in the general direction of the car. We noticed the slope was getting continually steeper, but we just kept pushing forward like idiots. Finally, we reached the breaking point when we found ourselves on the top of sheer cliff face with nowhere to go but down. The rock was damn near vertical and we didn’t have any climbing gear with us. To make it worse, we had wandered for so long that turning around and retracing our steps would eat up the rest of the daylight hours, leaving us with route finding after dark. We knew we would be in serious trouble if we were still on the side of the mountain after dark, so we decided to basically free climb down the rock face.

The rock face was only 100-150 feet long so I felt oddly comfortable with our decision while viewing it from the top. I’m no expert rock climber, but it didn’t look that hard…or so I thought! I made it about halfway down before I realized I had completely run out of solid holds for my feet and my hands, and it made no sense to upclimb because I would end up right back where I had started. So, I did what any normal person would do: I began grabbing shrubs and grasses for holds and cramming my knees and shins into tiny cracks, no matter how much it hurt! {To this day, I have a winner of a scar on my shin from mashing it into a particularly tight hold.}

I vaguely remember thinking about the pain, but that was far secondary to the actual fear in my head. I don’t get scared very easily and it takes quite a lot in the outdoors to make me downright uncomfortable. However, this was terrifying. I was hanging off the side of a mountain with no ropes or gear while wearing a slightly heavy backpack and trying to down climb a sheer face with negligible grips. The penalty for failure was very real, so I just continued to calm myself by focusing on one movement at a time. I didn’t look down or up and I didn’t consider the entire rock face in its entirety; I just focused on the baby steps.

Fortunately, we both arrived intact at the base of the rock face and aside from the bloody shin, I was physically fine. Mentally, however, I was a mess. I was beyond angry with myself for forgetting a map which is a pretty basic outdoor requirement. Additionally, I was wicked frustrated at our series of stupid decisions. When we first wandered off trail, we should have sucked it up and hiked back up the mountain until we found the solid path. If we had done that, the entire debacle would have been avoided. Hindsight is always 20/20 but in this instance, it was unnecessary. We made poor choices, period.

What’s the biggest mistake you’ve made outside or in the fitness realm?