You know, long runs are a weird thing in that they are all relative. A few years ago, I would have been panicked at the thought of running 9 or 10 miles. I mean, that just sounds so far! But, the more that I do it, the less scary the miles get. These days, anything less than 13.1 seems…doable. Who am I?!

Anyway, this past Saturday was my scheduled 9 miler and I was excited to get out there and give it a go. Like I’ve mentioned previously, my training has been abysmal at best, but I’ve still been getting my long runs done on the weekend. For me, those are the most important because they mentally prepare me for what race day will be like. Learning how to mentally adapt to running for hours at a time has always been the most difficult aspect of long-distance running for me. Luckily, I’ve rediscovered my love of podcasts, so this year’s runs have been a breeze in that regard.

I decided to shake it up just a bit for my 9-miler and hit up the nearby trails. Naturally, this made my run a lot more difficult and my pace was significantly slower, but it was totally worthwhile. I had stunning mountain views and a glimmering lake nearby, so there wasn’t a whole lot to complain about! I finished the 9 miles in one hour, 44 minutes at an 11:25 pace. This is definitely slow, but since I gained upwards of 500 feet in elevation and ran on very narrow singletrack, I’m okay with that. The miles are done; that’s what is important! 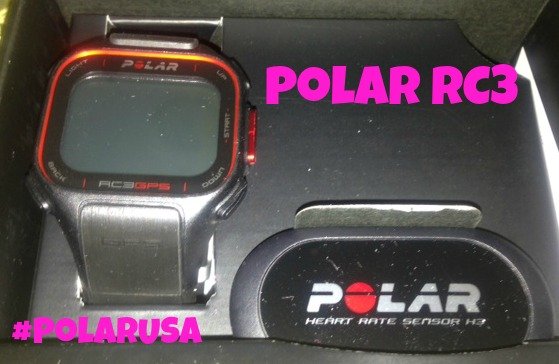 I also got the chance to try out a new toy during my run: the Polar RC3 heart rate monitor and GPS. A few weeks back, I received word that I was going to get the chance to test out this fun gadget, and I was pretty psyched. I’ve mentioned this before, but I really enjoy numbers and data after my workouts. I like looking at my heart rate zones and elevation gains/losses. I have no idea why this thrills me since I’m not a “number person” in real life, but whatever…it does! Up until now, I’ve used an ancient Polar HRM for CrossFit and the Garmin 305 for all of my runs. Unfortunately, my HRM was well over 10 years old and finally died, so I had to chuck it when I moved. My Garmin is still alive and kicking, but refuses to communicate with my laptop. I couldn’t upload data or look at the elevation charts after my run, and it was getting really annoying. So, I was totally amped when the RC3 arrived—once again, I had working technology!

My immediate reaction was to text Will and tell him that he needed to help me figure it out when he got home. I despise setting up technology because it is usually difficult and tedious. However, I decided to pull up my big girl pants and figure it out on my own…and you know what?! The setup was insanely easy. Like, I never even opened the instruction manual, and for me, this is saying a lot! The buttons on the screen are very user-friendly and navigation just makes sense. Out of the gates, this was a definite win for the RC3. 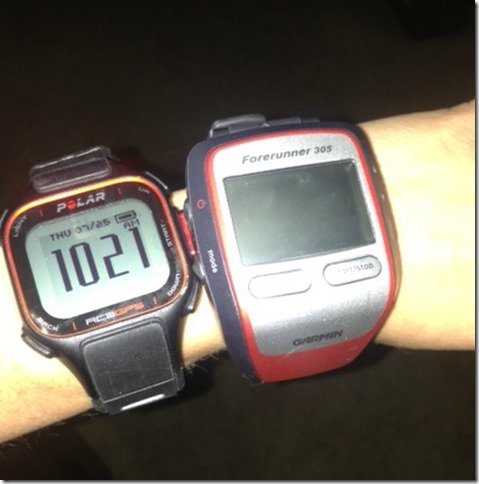 Obviously, the setup isn’t the only part of the GPS that matters. Since I received the watch, I’ve worn it to CrossFit twice and on a handful of runs, including the long run I mentioned above. The GPS took a couple of minutes to locate the satellite during my first-ever run, but since then, it has been super quick. In fact, I think it locates the satellites faster than my Garmin ever did. Additionally, I am digging the screen and size of the watch. Granted, the Garmin 305 is an older model and is much larger than their newer versions. However, I was pleased to realize that the RC3 is much smaller and sits comfortably on my wrist. The screen is still large though, and I haven’t had any problems reading it while running or working out.

The RC3 has different categories of exercise which makes it a good option for people like me who aren’t just runners. Running is the first category, followed by cycling and then two others labeled “Other Sport 1” and “Other Sport 2.” I setup the first “other sport” category for CrossFit by eliminating the GPS function. Now, I can easily flip to this category so that it measures my heart rate zones but doesn’t waste battery by turning on the GPS. Pretty handy. 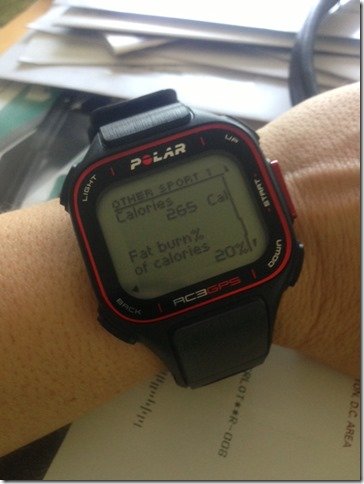 After a CrossFit WOD… 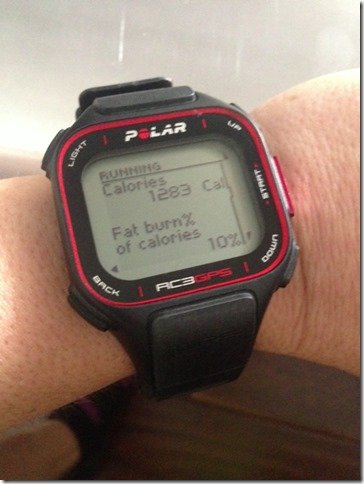 …and after my 9 miler on Saturday. Kinda interesting to see how the higher intensity (CrossFit) burns so many more fat calories when compared to a long, slow run

Finally, I am totally digging the numbers that it spits out after I finish a workout. Maybe I’ve been living under a rock (likely), but I never realized HRM gadgets could tell you all of these things! Immediately after I conclude a run or CrossFit WOD, I can look at the watch and it will tell me the duration of the workout; the average, max and minimum heart rate numbers; how many calories I burned and what percentage were calories from fat; how much time I spent in each of the five target heart rate zones; and my total miles, my average pace, and my elevation gain and loss, if it applies. It’s kinda fun!

There is one negative that I’ve discovered with the watch, and while it’s not a deal breaker, it totally drives me insane. The charging cable fits into a slot on the back of the watch so that you can plug it into the wall or a computer in order to charge it. When the RC3 isn’t attached to this cable, there is a small flap that covers up this slot. For some reason, I absolutely cannot lift this flap up with my finger nails! When I’ve needed to charge the HRM, I usually dig out a nail file or tweezers or some other small object that I can use to pry the flap away from the back of the screen. This is likely just a “me issue” since I have short nails, but still. I imagine guys may have similar issues since they have larger fingers!

Overall, I love the watch and it has replaced my Garmin. Although I can’t speak to its durability since I’ve only owned it for two weeks, I can attest to its ease of use and serious amounts of data. If you’re into numbers and you’re looking for one watch that appears to do it all, I’d definitely recommend giving the RC3 a shot. In fact, if you’re curious enough to want to purchase one, I have a discount code that will get you 25% of any color of the RC3 (just that particular HRM though!) Click::here:: and use code: “fitfluential” during checkout for the 25% discount. Just so you know, the code will expire on August 10, 2013, so if you’re thinking about it, you’ve only got a few weeks to mull it over!

Do you run with an HRM or GPS? Which one?

I’ve Been Keeping A Secret