Naturally, one trip to this beautiful neck of the woods wasn’t enough; we had to go back for round two!

For our second venture into the Never Summer Yurt system, we chose the Nokhu Hut. Yes, it’s a hut but it was so quaint and cozy that it reminded me of a yurt anyway!

The Nokhu Hut has the shortest and easiest skin I’ve ever encountered in the backcountry: a whopping 1.5 miles! We knew that we could easily get into the hut, so we didn’t stress about our arrival time at the trailhead. As a result, we booted up and stepped into our skis just as the sun dropped behind the mountains. Fortunately, the moon shone brightly so the four of us only needed one headlamp to light the path to the hut. 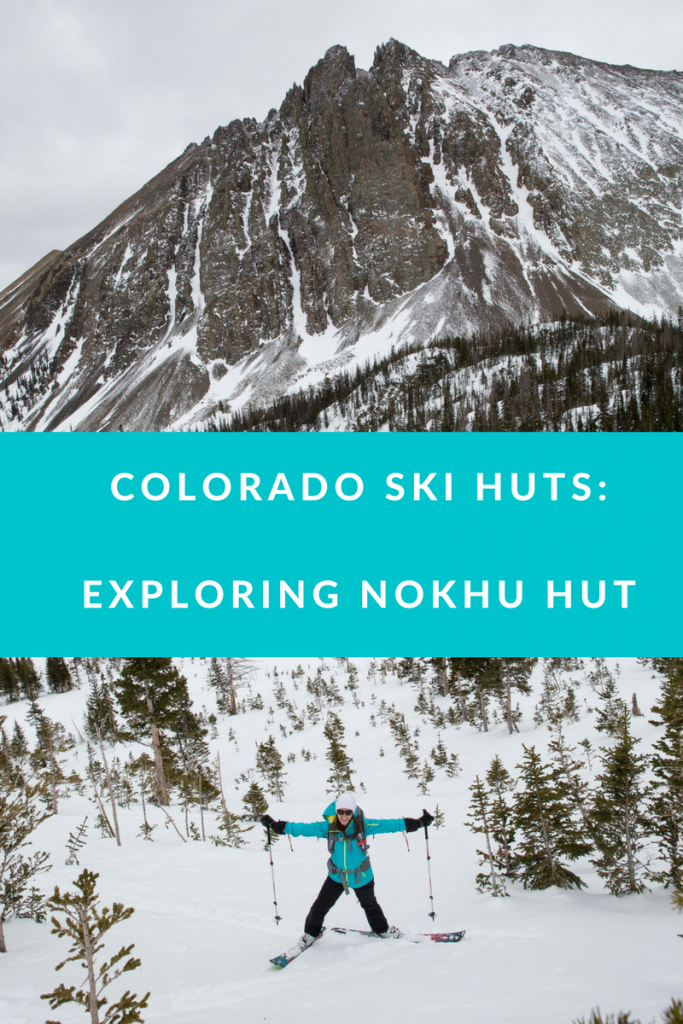 It’s kind of trippy skinning in the darkness. I was still huffing and puffing, per usual, but I couldn’t clearly see where I was going so I had no perspective on how much ground I had covered. I could faintly see the glimmering snow ahead of me, indicating an uphill slope, but I didn’t have enough visual clarity to confirm how hard I should be working. In short, I just put my head down and trekked into the hut. 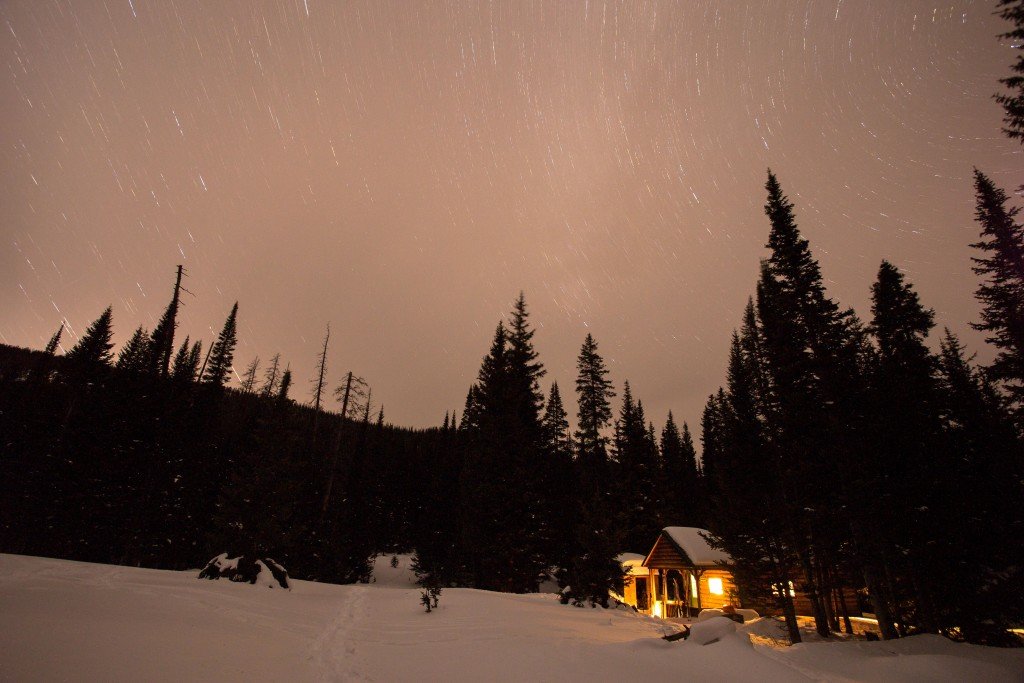 After an hour, we crossed the single avalanche chute that is located 0.1 miles before the hut. Then, we saw a brightly lit bulb shining through the trees: Nokhu Hut! We gratefully dropped our packs, stripped our skins from our skis, and settled into our home for the weekend.

Y’all, when I say this cabin is quaint, I absolutely mean it! It is significantly smaller than any cabin in the 10th Mountain Division and I would estimate that it was maybe 350 sq. feet. But, it had all of the essentials for a comfortable weekend: two bunk beds {each with a double bed on the bottom}, a table, a wood burning stove, and a kitchen area. Truthfully, we all fell in love with our little home in the woods and declared it our new favorite at 10,000 feet! 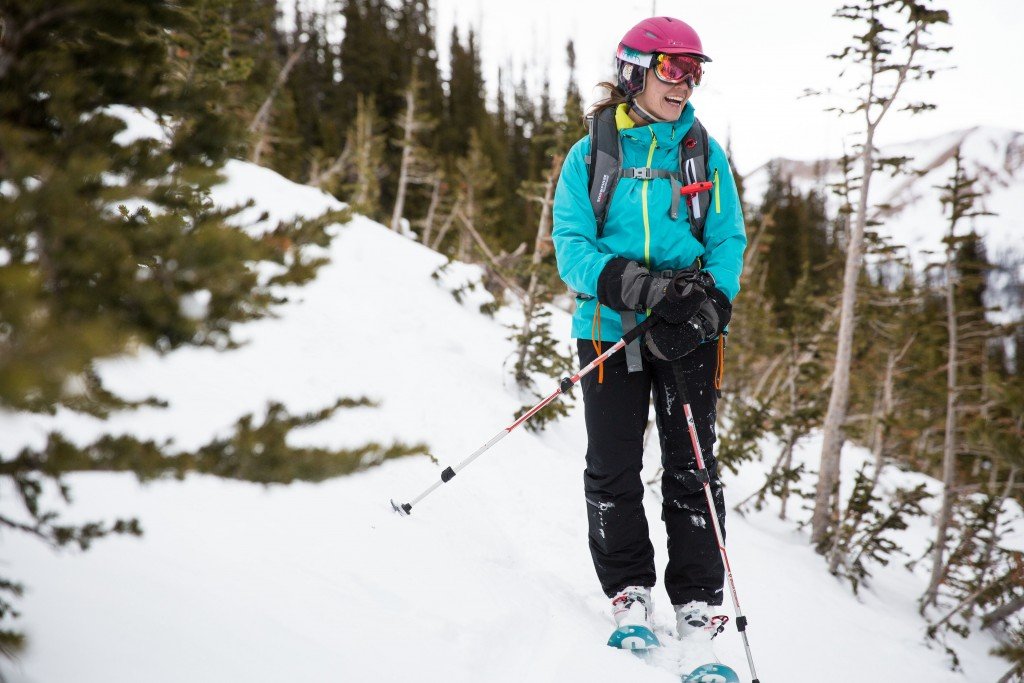 Something was clearly funny!

Colorado is known for treacherous avalanche conditions and this weekend was no different. As a result, Saturday morning started sluggish as we debated our options. Did we want to spend the day skiing over to a former ski area, located around the backside of the range? Or did we want to tour up by the lake and look for some fun lines in that area? Which slopes looked the safest? Thankfully, we had a topo map of the area that identified the grade of the surrounding slopes. The four of us–Will, Ryan, Maren and myself–agreed to play it safe and stick to low-grade hills. We decided to explore the area close to home. After breakfast, we grabbed our daypacks, strapped on our skis and headed up towards Lake Agnes. 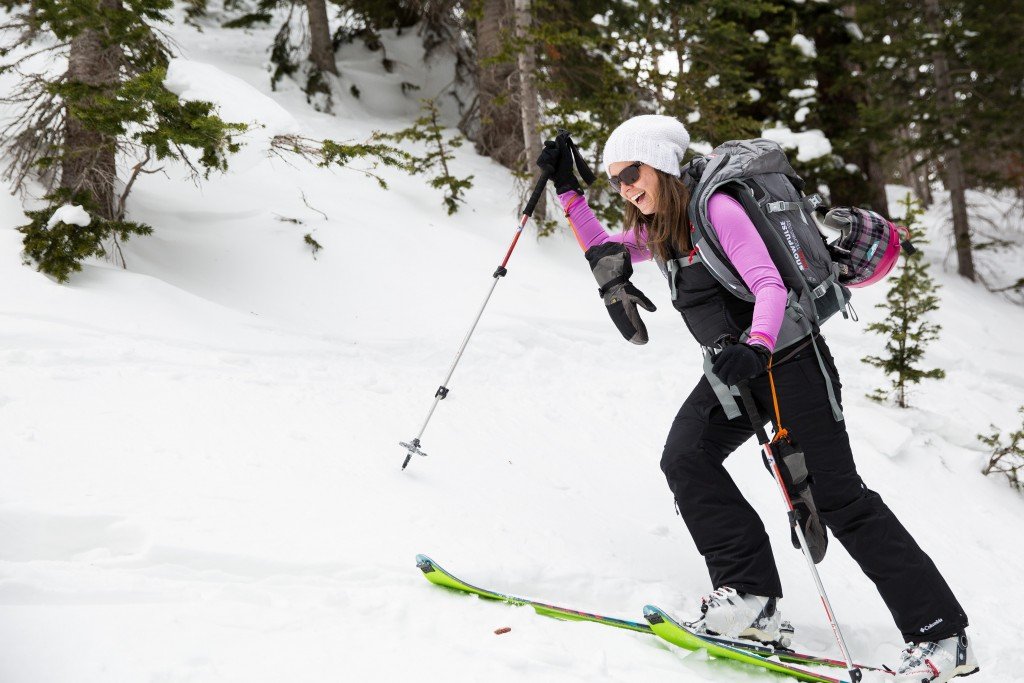 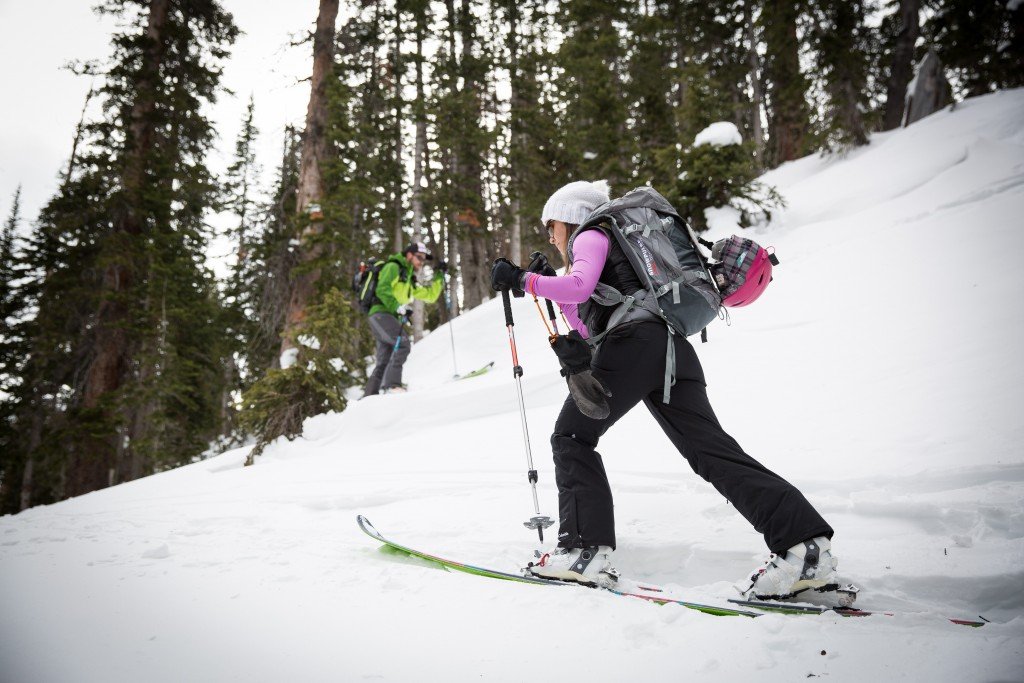 Lake Agnes is located a mile away from the hut around treeline. I’m not sure if we missed the trail or of it was just snow-covered, but we ended up taking a circuitous route. After trekking over steep, bulbous mounds of snow–some so steep that I fell over backwards while trying to climb!–we found the lake. 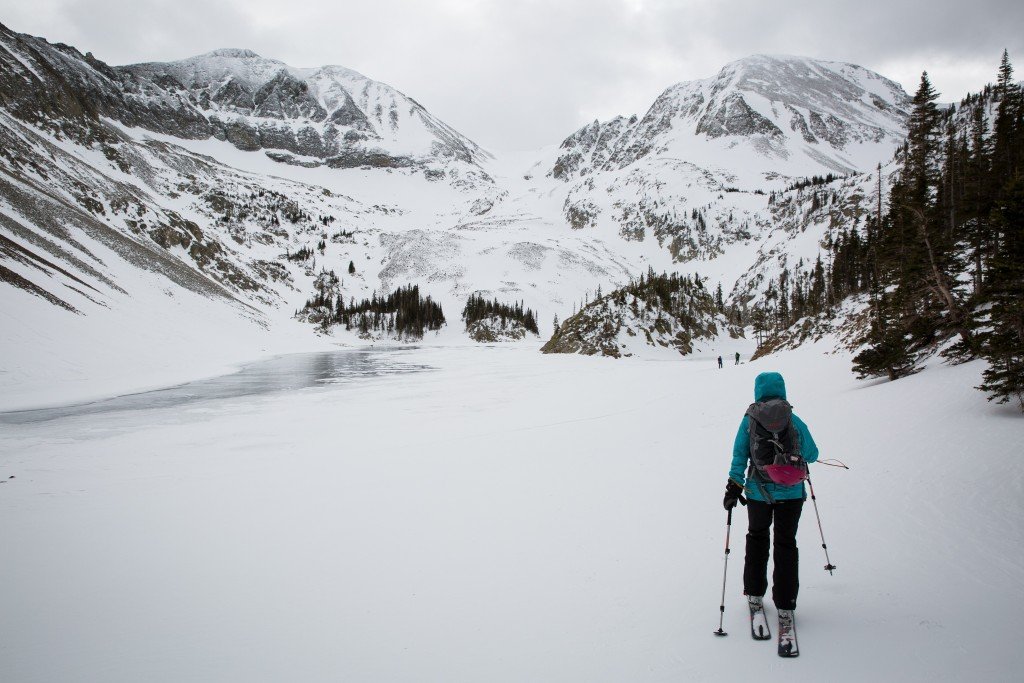 The wind whipped across the ice, making it difficult to determine where the frozen water ended and land began. We skirted what we though was the perimeter, taking in the towering peaks around us. There was no one else in the area and due to the blustery winds, I had my hood cinched on my head. As a result, I could only hear my own breathing amidst the gales and it was actually peaceful. 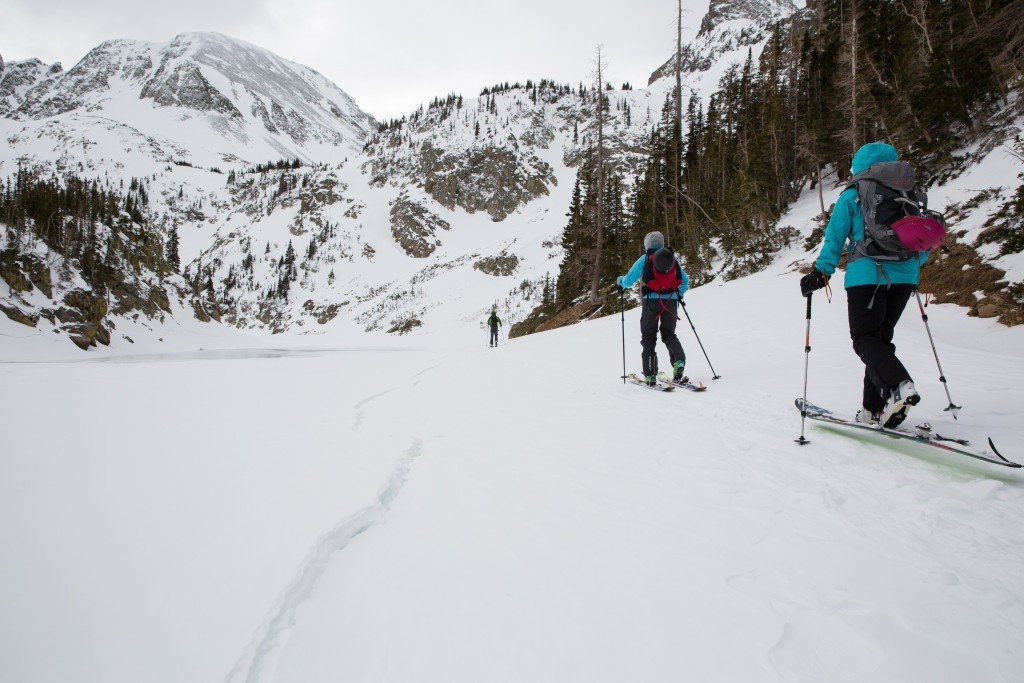 Maybe that’s the line between frozen ice and dry ground?

We circled the lake and headed into the glades on the east side. After skiing through the trees for a bit, we spotted some open lines on the slopes in front of us: ski day! 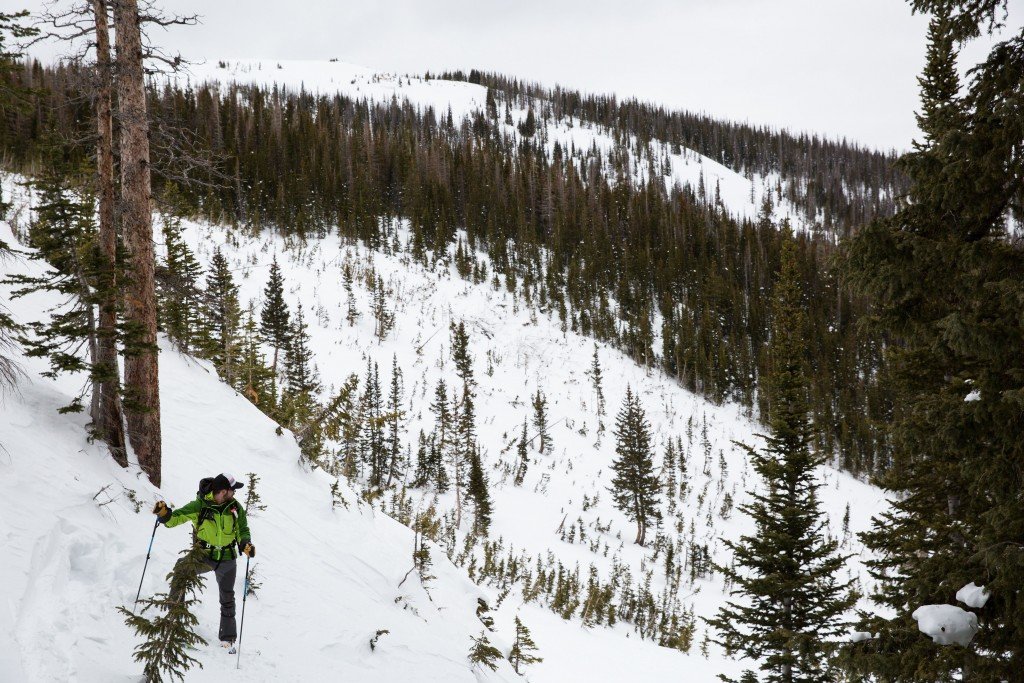 Ryan, scouting through the trees….right before he snapped his pole! 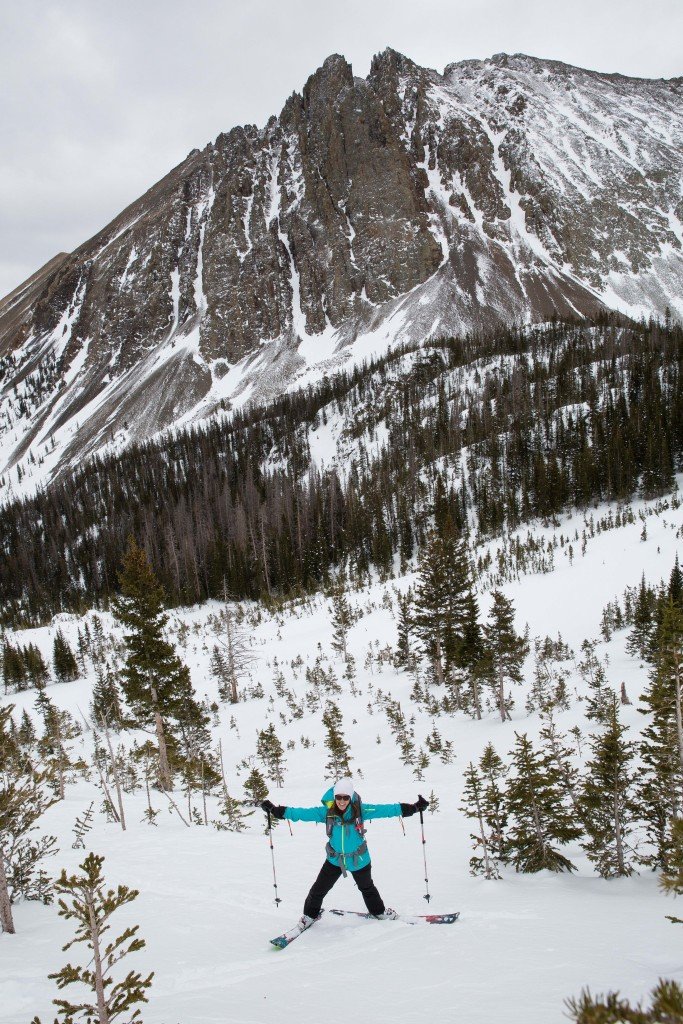 And then there’s me….looking like I belong in ski school

Truthfully, the snow was variable and it was pretty darn tricky! I don’t ever fall when skiing–mainly because I’m too old and that nonsense hurts, not because I’m skilled!–and I took a digger while splashing through the powder with Maren. She was leading the way and I dropped into a pillow only to find that the tips of my skis weren’t budging! I somersaulted, landing smack on my head, and laughing my face off. Fortunately, it was a powdery fall and I had my helmet on, so the only damage was to my ego….

….until I woke up Sunday morning to a wicked ache in my neck! See what I’m saying about being old?! 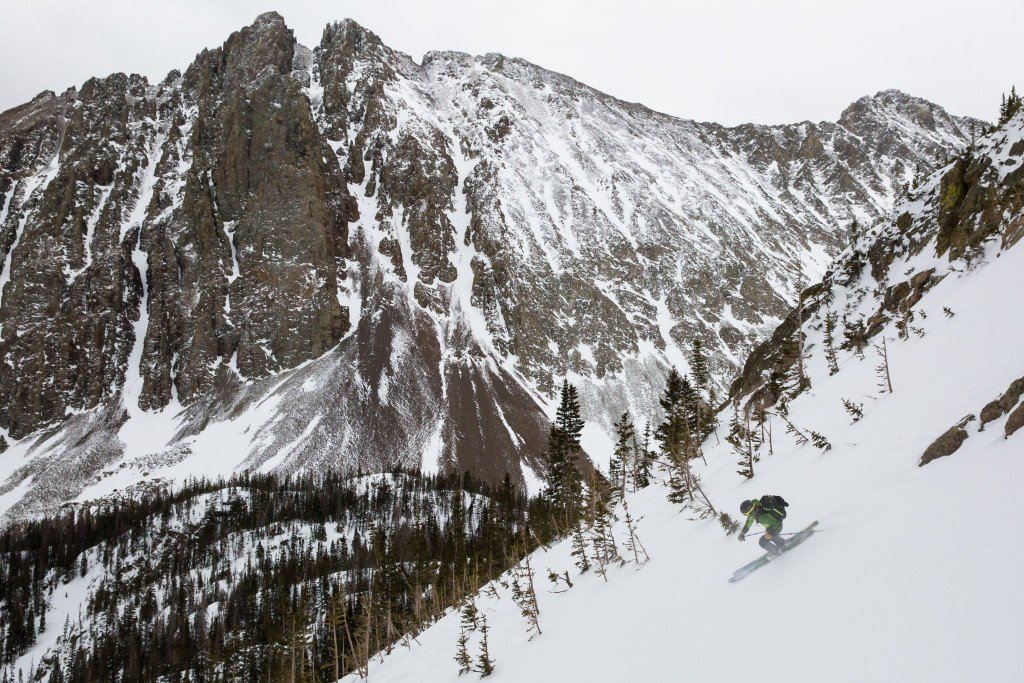 Maren, looking fierce with one pole! 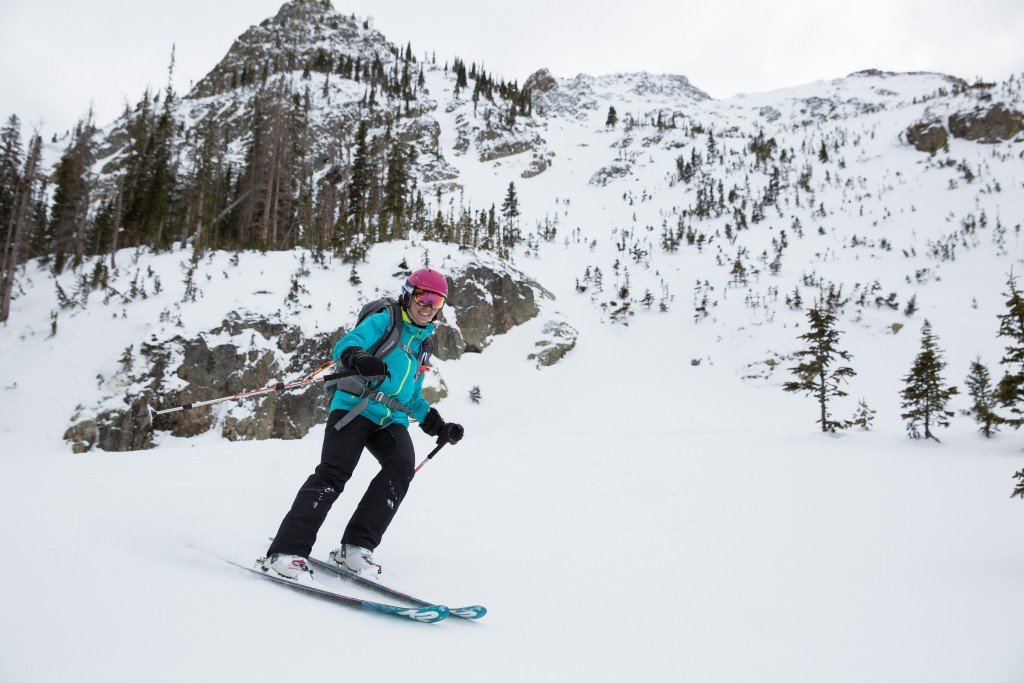 Me, looking like I’m skiing on the bunny hill

After the first run, Maren and I decided to head back down to the hut while the boys headed up the peak to tour some more. Ryan had {somehow} managed to snap one of his ski poles in half, so Maren was skiing with a single pole. As for me, did I mention that I’m old? I was tired! We spent a solid six hours touring and skiing and I wanted a glass of wine! 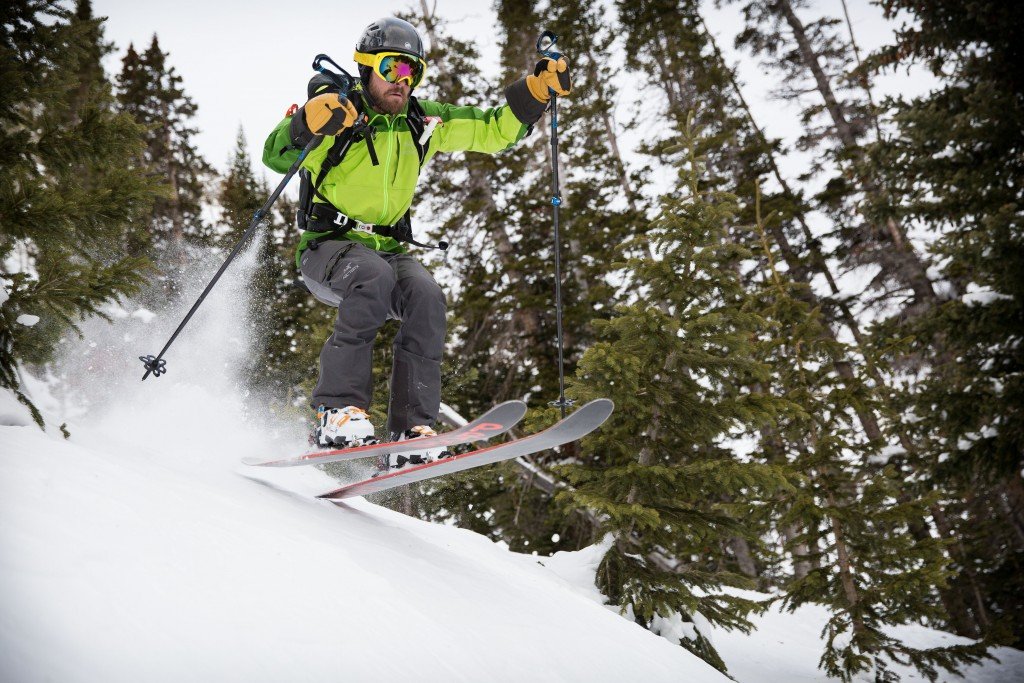 Clearly, Ryan made his second run worth it!

The rest of Saturday night was spent chatting by the fire, drinking whiskey, and inhaling all of the food that we carted in on our Pulk sled. Again, we awoke late on Sunday, but no one was stressed. The skin out was only 1.5 miles and guess what? It was almost ALL downhill! 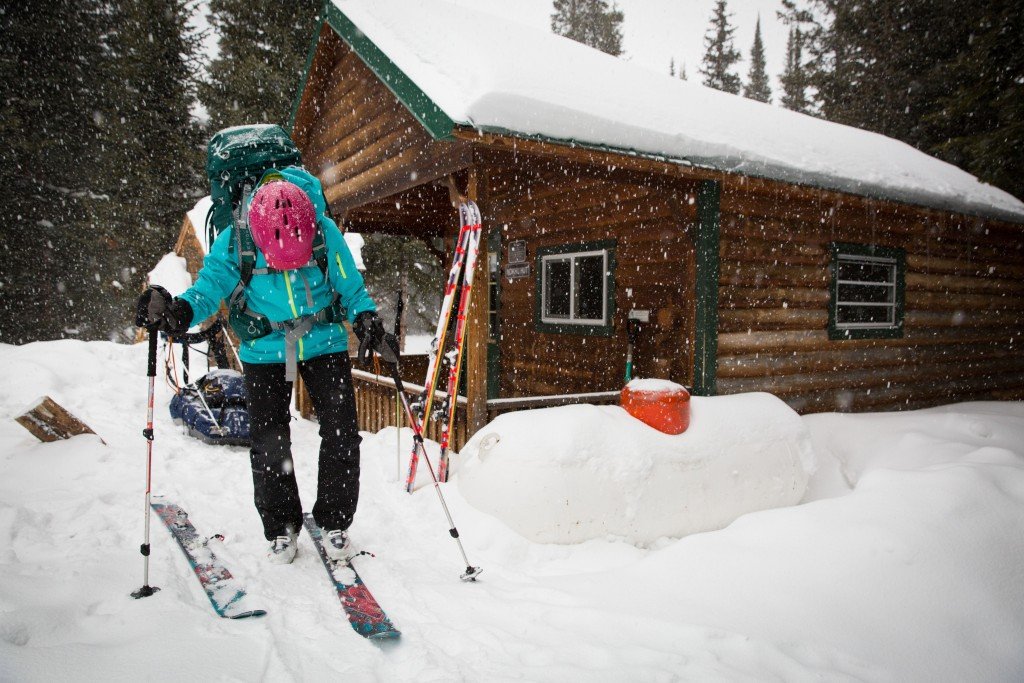 Clicking in before we skied out on Sunday. Until next time, Nokhu!

If you’re looking for a fantastic beginner backcountry experience, the Nokhu Hut is it. Technically speaking, the hut sleeps 6-7 people, but we were perfectly comfortable with four. For those that are less experienced in the backcountry, tackling the trek to the hut alone would be a great place to start. In fact, these comfy-cozy backcountry shelters are making me wonder how often I’m going to sleep in a tent this winter!

What Am I Eating These Days? {Giveaway}