Why You Should Never Talk On the Phone in the Bathroom

Ok, so I had no intention of posting anything today but I just read my beloved boyfriend’s Facebook status and it has me laughing so hard that I felt it needed to be shared with the world.

To preface this story, let me explain two things:

Having given you that bit of frontloading, here’s the status. And yes, it really was this long!

“Here’s some free life advice: don’t talk on a conference call in a public men’s restroom.

While I washing my hands after lunch this week, I was surprised to hear someone in the king-sized stall ask, “Do you think we’ll be able to get that done in time?” At first I thought he was talking to me, but I became even more concerned when I thought he was talking to himself. Fortunately I heard the unintelligible squabble of a response via cell phone, and I realized this gentleman was attempting to be the exemplar nonpareil of multi-tasking. Somewhat concerned but mostly disgusted, I turned to leave.

Just as I opened the door, I was nearly bowled over by a portly quinquagenarian who appeared to be in need of a bathroom stall in the worst way possible. Upon realizing his stall of choice was already occupied, he swiftly executed an orthogonal left-handed turn, which undoubtedly would have blown the ACL of a less-motivated man, and slammed the door behind him.

My curiosity got the better of me, so I feigned drying my hands for about ten times as long as I should have. What happened next was equal parts unholy and amusing. 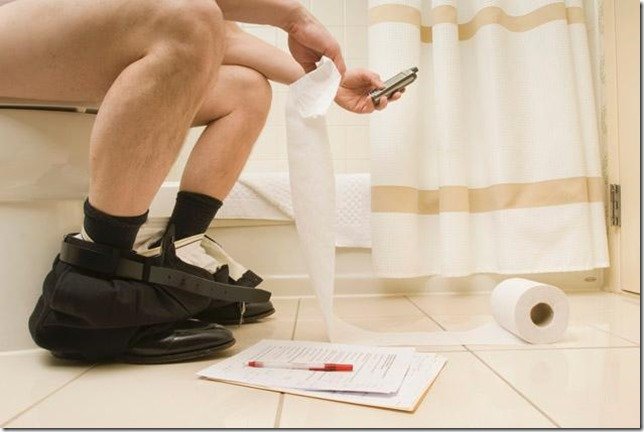 Within seconds of shutting the door, our aforementioned portly friend released a cacophony of flatulence. It started with a mellow symphony of baritones, then sharply rose to a fast-paced staccato that sounded more like something that should come from an automatic firearm than the hidey hole of a healthy human being. There was a brief respite, an elongated groan, and then a sound that can only be described as something akin to dropping a bowling ball into a bathtub from a height of six feet.

I made a mental note to avoid whatever food truck was parked out front that day.

But then came the best part: the guy on his phone said, “Yes definitely, that sounds like the right approach.” HE WAS STILL ON HIS CONFERENCE CALL. GOOD SIR WHAT ARE YOU DOING?! I can only imagine what the folks on the other end of the line thought of whatever ‘approach’ they could hear, because frankly, there’s no way they could not hear it. Or unhear it, for that matter. I quickly departed before having to make eye contact with either of them.”

And there, my friends, is your life advice for the day, compliments of my boyfriend. Happy Wednesday!

Alaska: The Details & The Questions