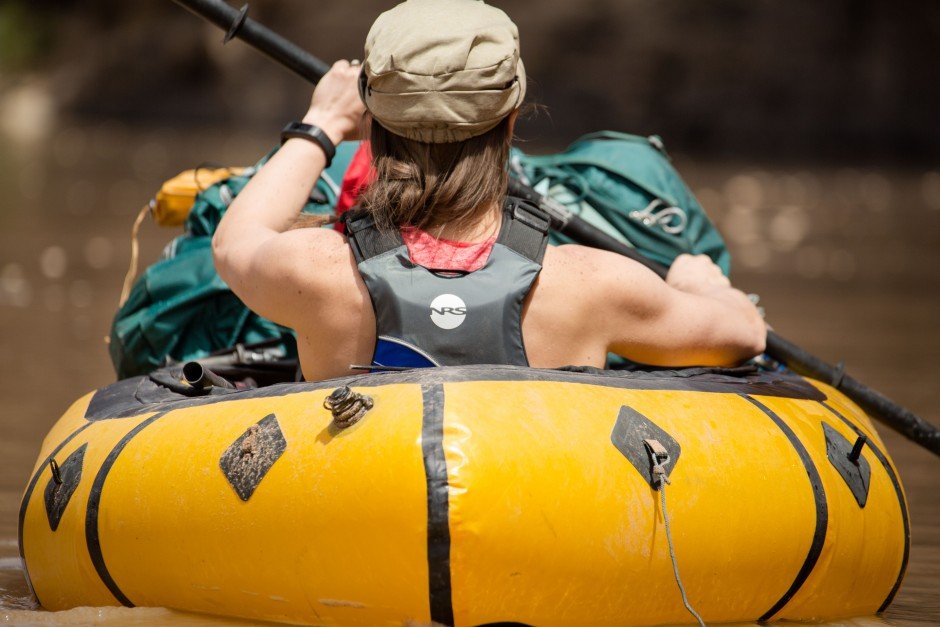 If you missed the first part of this story, go check it out!

After hearing rain pound against our tent all night, I was excited to climb out and see the sky on Sunday morning. There is always something about desert rainstorms; they clear the air, leaving everything fresh and sparkly. This storm was no exception and I was happy to see a beautiful day dawning over Canyonlands. 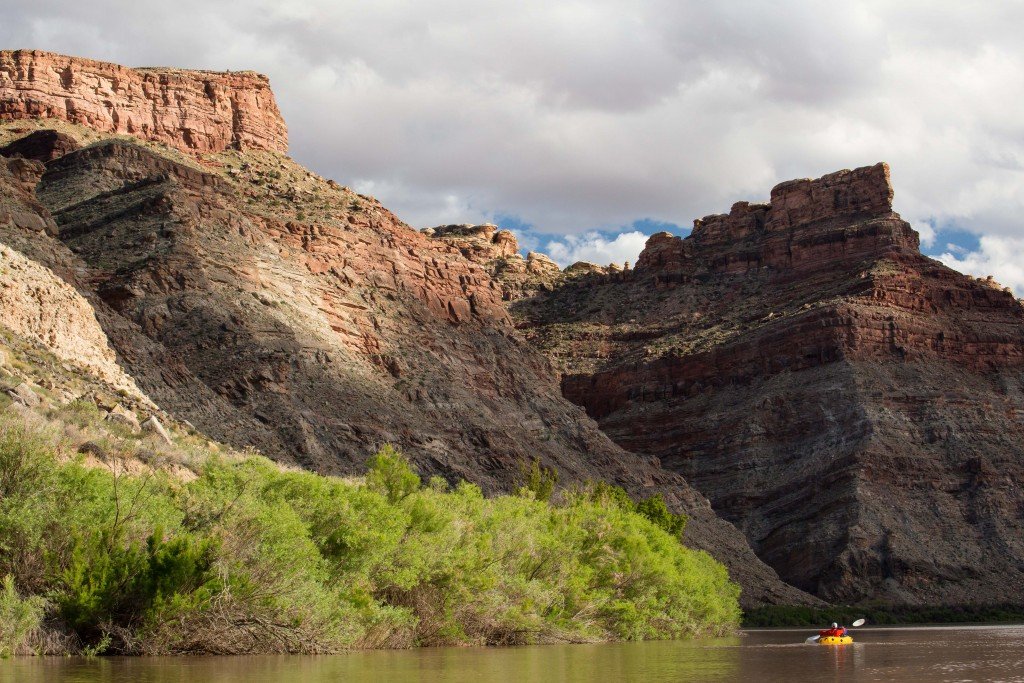 Of course–since we were caught up in our comedy of errors!–the day couldn’t be without some sort of trial. I immediately learned that Andrew and Stew hadn’t fared so well during the storm. We’d all thought their campsite was the perfect spot: nestled in some trees, protected from the storm by their branches. As it turns out, their flat plateau was slightly lower than the rest of the surrounding ground, and the thick root structures formed a narrow tunnel of water….leading directly towards the boys’ tent. Apparently their tent began flooding as it floated around in the water, unable to escape from the lowland trapped in the trees’ roots. They had to get out in the middle of the storm at midnight, pick up their tent, and move it to another location.

Trust me: I tried not to laugh, I really did. But I could only imagine how funny it would be to see them sopping wet and angry! 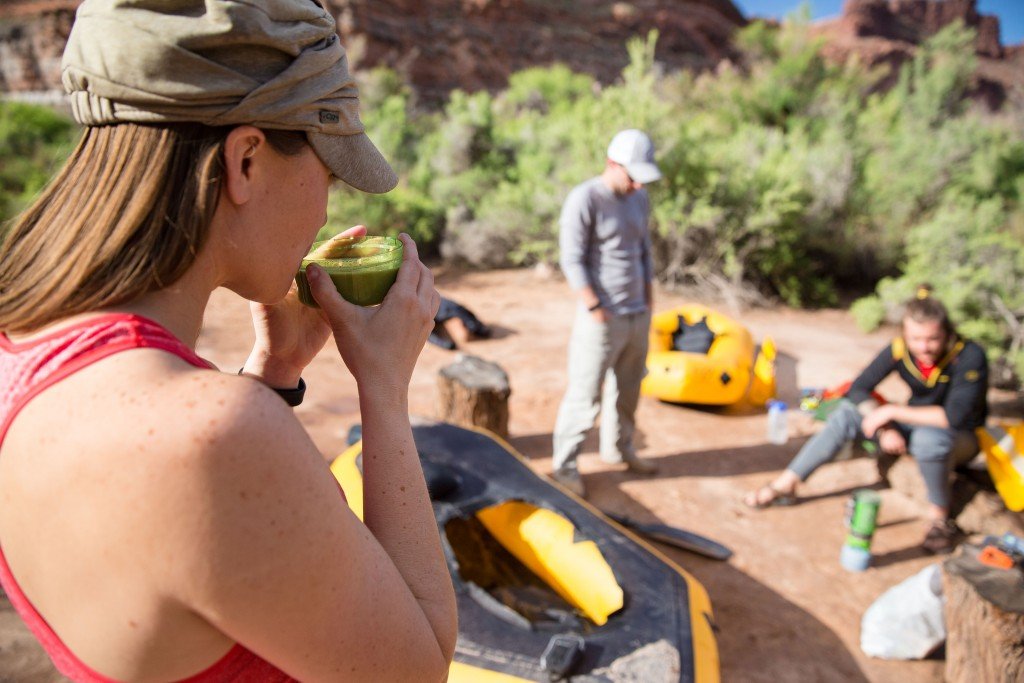 After a tasty breakfast, we packed up our rafts and put in back on the Colorado. We didn’t have that much paddling left–maybe 10 miles–but we were still hoping to stick to the original plan: we’d get out after the confluence and before Spanish Bottom. Then, we’d hike the one-mile steep climb up to the canyon rim.

Our time on the water was uneventful. We alternated between floating and paddling, admiring the towering canyon walls while appreciating our best day of weather yet. Per usual, my right wrist began acting up {I have slight carpal tunnel} but I was able to float through the majority of the day. No big deal!

We reached the confluence around 5pm and immediately began searching for our drainage. You see, we weren’t using a trail to climb up to the rim. Instead, we had eyeballed a drainage ditch on our topo map that we believed would get us to the top of the canyon through some bushwhacking and boulder hopping, eliminating quite a few miles of hiking the following morning. We had even read trip reports from other paddlers who had used the same route. How hard could it be? 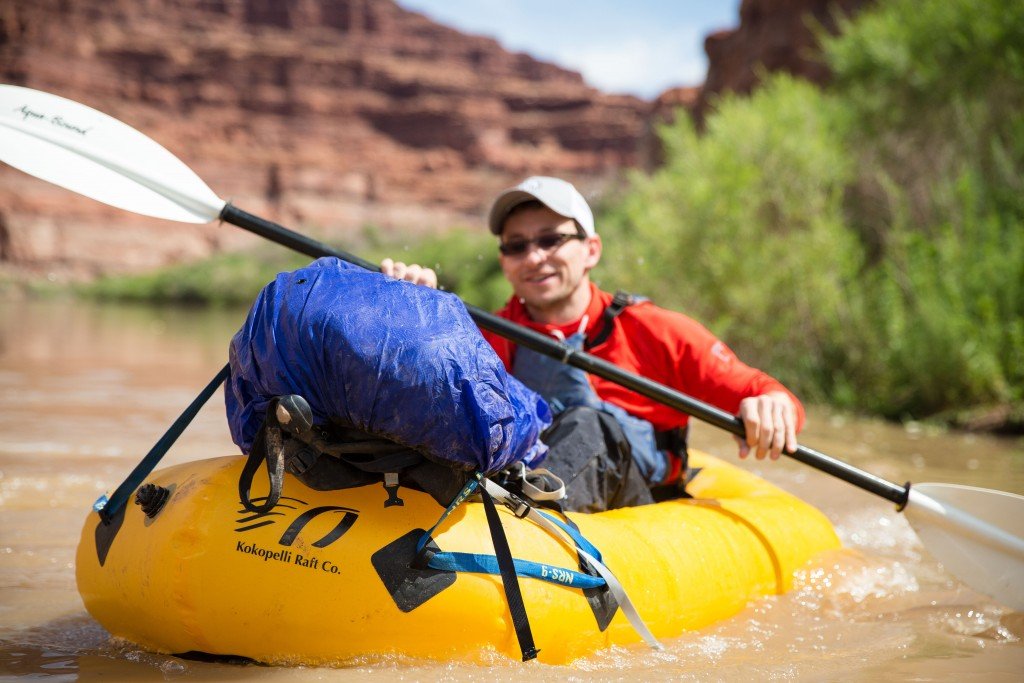 We found the ditch and set about packing up our packs. We deflated our Kokopelli rafts and swapped out our river shoes for our hiking boots. As I cinched my exceptionally heavy pack onto my back, I remember thinking that it was fairly uncomfortable, but tolerable. “It’s only one mile,” I told myself. 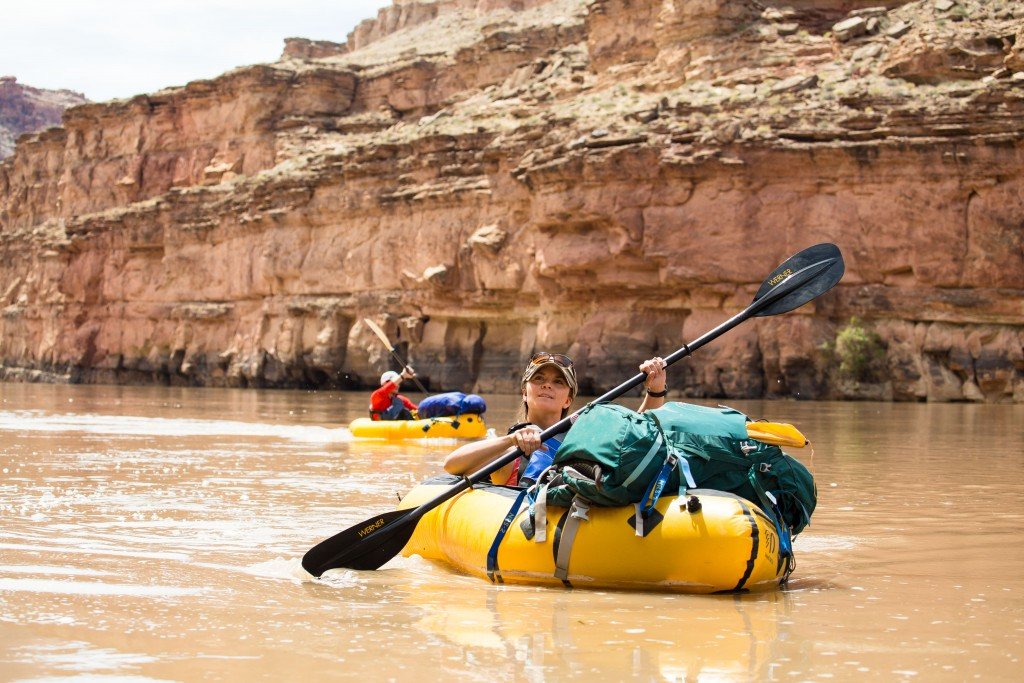 We quickly found an animal trail that skirted along the river, gradually climbing up the canyon walls. After 20 minutes, we split into two groups: Kalen, Andrew and Stew leading the way with Will and me in the back. As the walls steepened, our trail disappeared, and we eventually realized we were in a “choose your own adventure” type of hike…and it was quite sporting!

Massive boulders continued to pop up in front of us, requiring me to climb over them using both my hands and feet. Instead of hiking, we were climbing and while fun, it was tough! My pack was so heavy that I kept tipping backwards; not a safe bet when you’re clinging onto rock. I’d sometimes have to squat down to jump to the lower levels–it brought me closer to the ground with less impact on my knees–and on one occasion, I toppled over backwards from my pack weight. Even worse? I couldn’t get up! I flailed around on my back like a tortoise, waving my arms and legs while rolling around. Finally, Will saw my predicament and helped me back onto my feet. How embarrassing!

We kept climbing up and up, the path getting tougher and steeper as we neared the rim. Darkness gradually descended but since we were so close to the rim, we weren’t worried. Unfortunately, we should’ve been.

Will and I had just topped out on a particularly rough section of climbing when we looked across the gap to see our friends. Kalen was clearly trying to climb something, but she wasn’t wearing her pack. Why? Because she was legit climbing with a difficulty of at least 5.9. As it turns out, there was a band of sheer rock as the last layer before the top of the rim. It was only climbable with true rock climbing gear like shoes and ropes and a harness. We had none of this {nor am I a climber!} so we couldn’t climb up the band. In short, we were stuck. 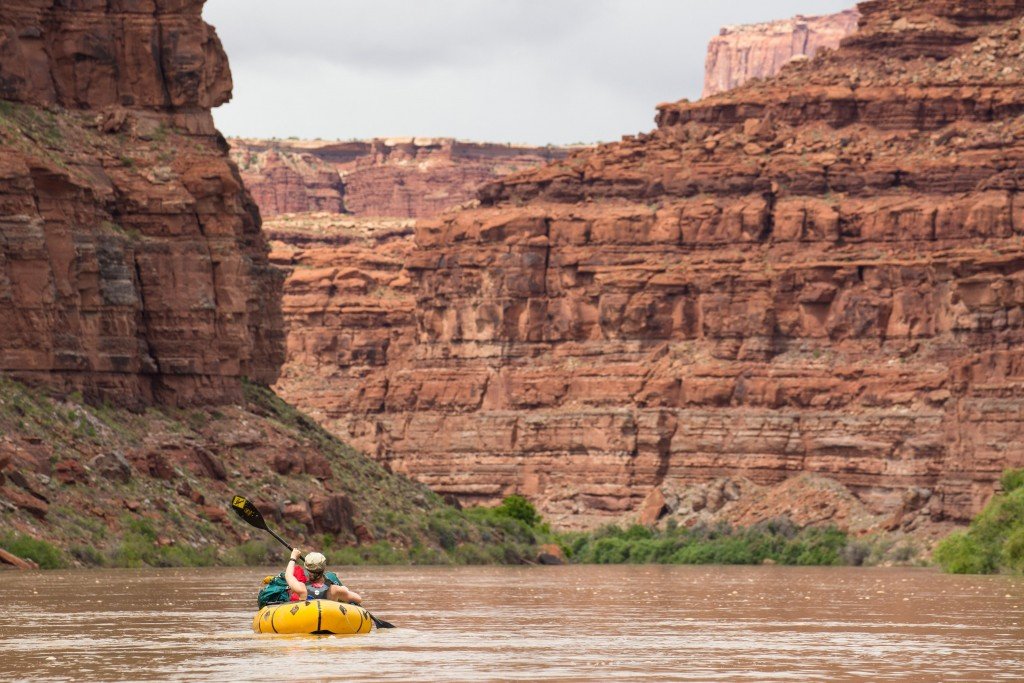 I grew a touch nervous and we waited for the rest of the crew to hike back to where Will and I were standing. It was completely dark now and we were at least 1000 feet up a steep canyon wall. The footing hadn’t been easy while climbing up so I couldn’t imagine how it would be descending in the dark. I evaluated the area we were waiting in, considering it for a possible campsite, but I knew it wouldn’t work. After hours of climbing the canyon walls, we had to descend back to the river. In the dark.

Thankfully, the descent wasn’t nearly as difficult as I imagined in my head. We all turned on our headlamps and carefully picked our way back down the drainage. There were a few sketchy moments, like when I down climbed a section only to realize my foot couldn’t reach the ground. I precariously hung in the air for a few tense seconds until Will scrambled back up the trail to grab my leg and help me down. But overall, it wasn’t awful and we reached the river unscathed.

But then we had to figure out a new plan. 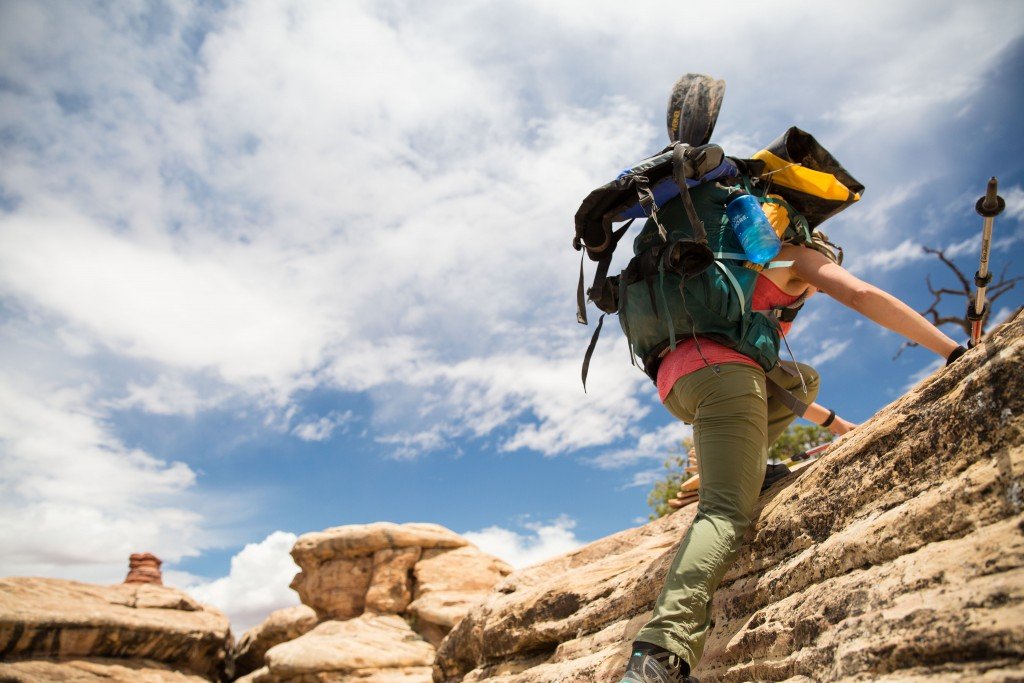 It was just after midnight by the time we reached the river bank where we had deflated our rafts hours earlier. Not only were we not on the canyon rim but we also weren’t within hiking distance of our car. There was no other trail up to the rim from where we were standing; we had to figure out a new plan.

A few guys in our group tossed around the idea of departing by themselves that night in an effort to get the car and bring it closer to us, but they were immediately vetoed. No one was traipsing through the canyon at night by themselves! So, we came up with Plan B: we’d sleep there for the night, wake up at dawn and paddle the 1.5 miles down to Spanish Bottom. Once there, we’d deflate the rafts {again!} and find the rarely-used Red Canyon Lake Trail. From there, it would be an 11-mile grind up the wash, out of the canyon and back to the car. There was zero chance we’d be able to accomplish this by 10am, so Stew’s hopes of catching his evening flight back in Denver were dashed.

Our alarms beeped early as we all groggily rolled out of our tents. Will returned from his scouting mission {he had woken up an extra hour early to hike down to Spanish Bottom to ensure there was a trail} and while not positive, he thought our plan would work. We quickly ate breakfast, packed up our belongings, and paddled the quick mile down to Spanish Bottom. 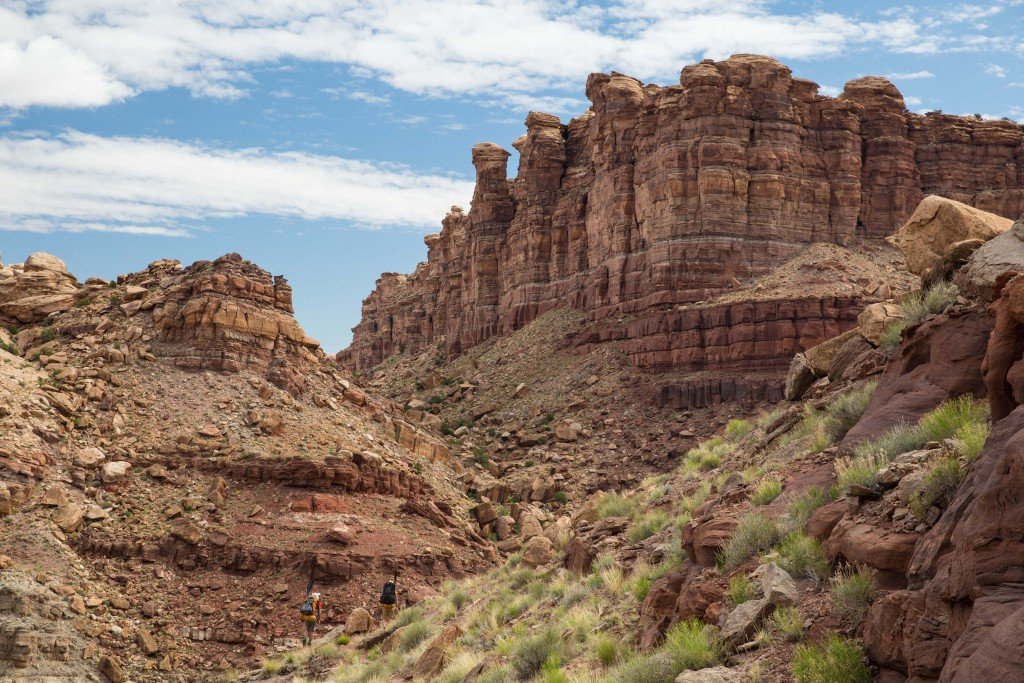 After deflating our boats for the millionth time, we easily found the Red Lake Canyon trail and began our journey upwards. On the bright side, this was a clearly marked trail, so we knew it was going somewhere! It was also less technically difficult than the boulder mess we had tackled the night prior. That said, this shit wasn’t easy and I was suffering! Andrew, Stew, Will and Kalen seemed to struggle far less than me and I definitely felt like the weak link in the group {not a good feeling, by the way!} And for awhile, I doubted myself: everyone was so much faster than me. Was I going to make it all 11 miles? Could I even do this?

As with everything, mental game reigned supreme. I knew I had no other options: we had to hike out of this canyon. So regardless of how steep the climb was, how heavy my backpack felt, or how badly my hip bones hurt, I couldn’t stop. We needed to get back to the car and there was– quite literally–no other way to get there. So much for our easy last day! 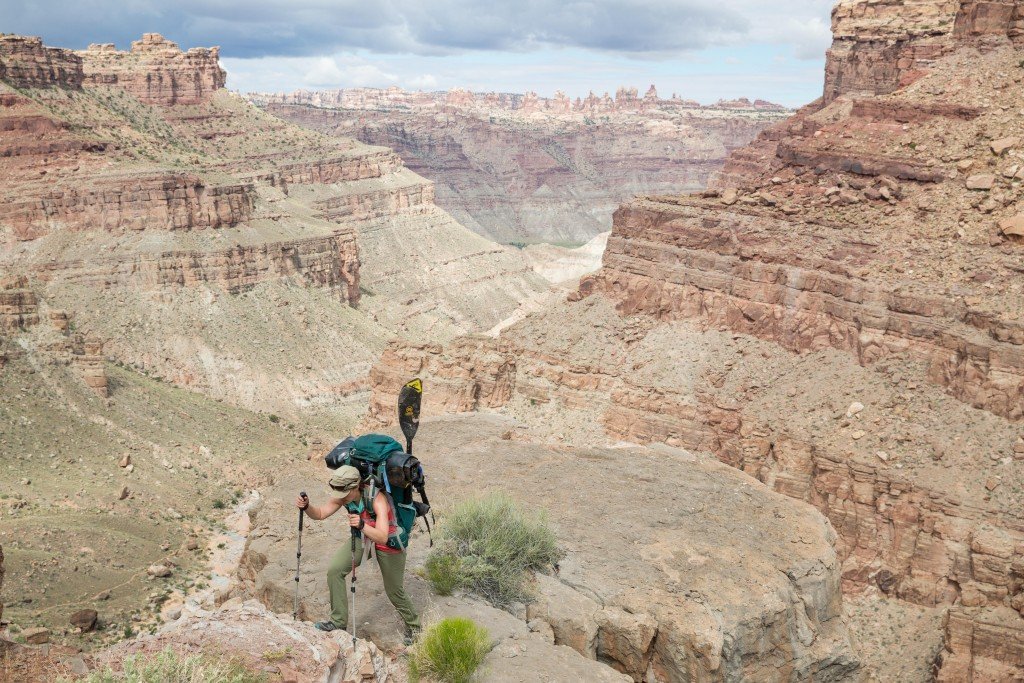 If you look carefully, you can see the slightest hint of green trees at the base of the back canyon wall. That’s the Colorado!

After 90 minutes, we exited the steep canyon: the climbing was over. {I was also pleasantly surprised to learn that even though I was back-of-the-pack, we had been hauling! We covered those four miles and couple thousand feet of gain quickly!} From there, we continued hiking up through the wash. We crossed through Devil’s Lane, a flat and sandy valley with tall red rocks towering around us. From there, we headed into Devil’s Pocket. 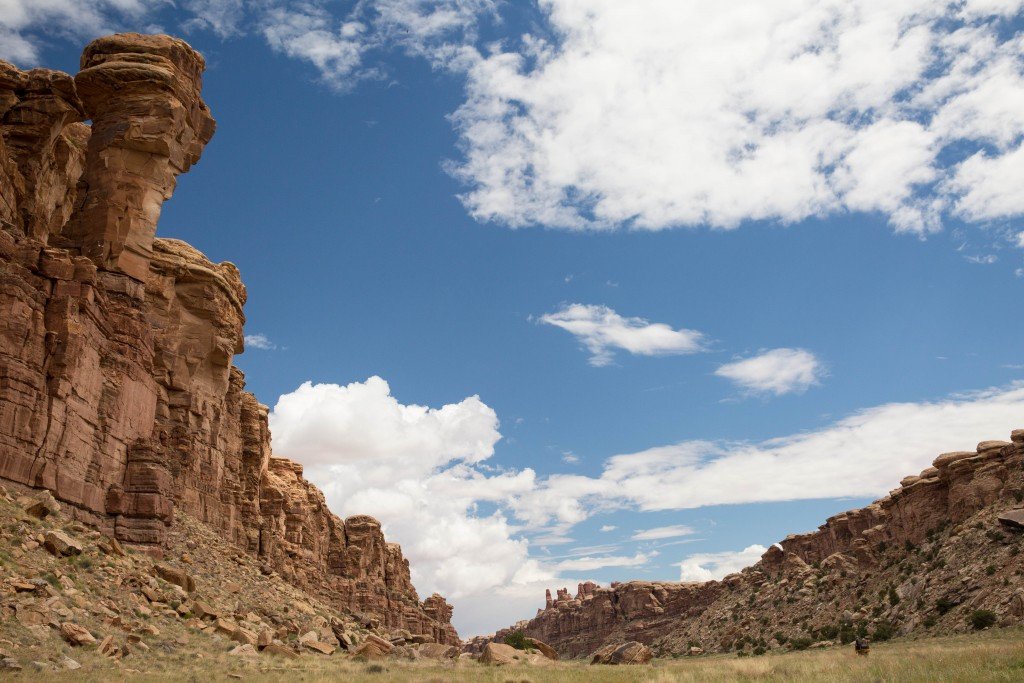 Devil’s Pocket was a straight, flat valley that seemed never-ending! In reality, it was only three miles but it felt like forever! The rock walls towered around us and the valley floor was filled with wildflowers, but it was hard to focus on the beauty. The trail was barely used and tumbleweeds littered the ground. In some places, I was kicking tumbleweeds off the small path just so I could continue. Would this Devil’s trail to hell never end?! 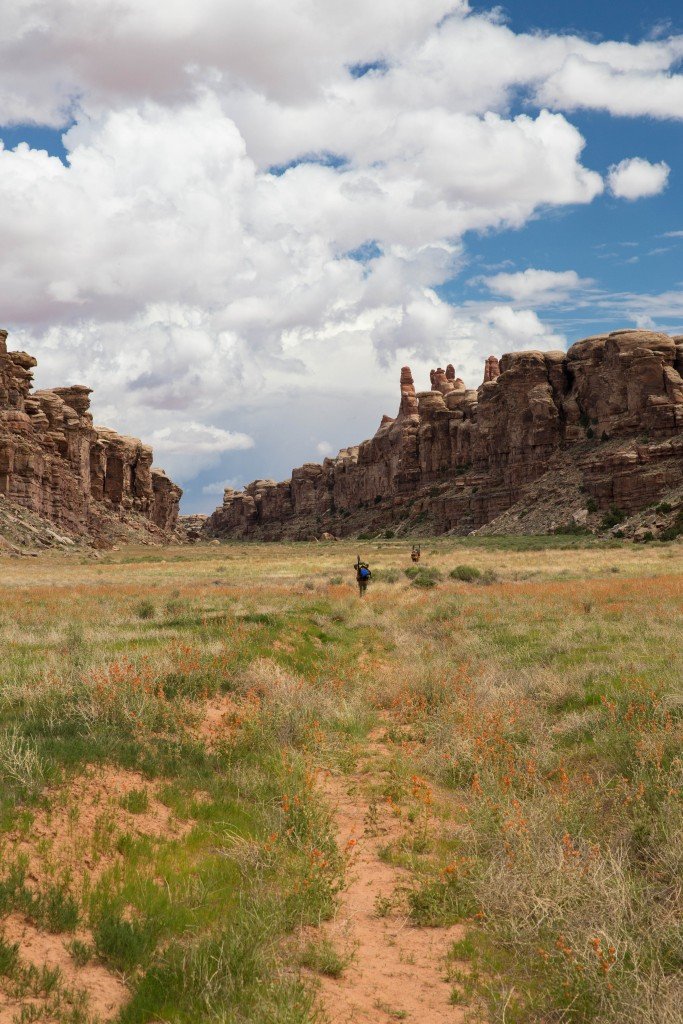 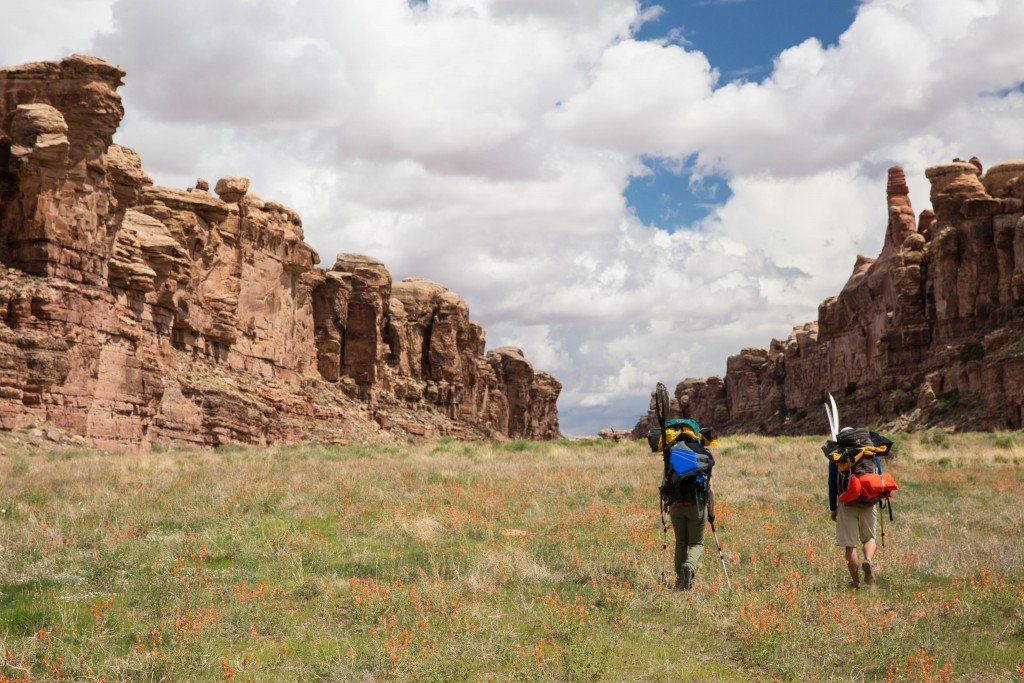 Thankfully, it finally did and we all breathed a sigh of relief when we hit the junction with the more popular part of the trail. We just had to hike back to the parking lot and we could head home!

Of course, that was easier said that done as we still had a handful of miles left. But, the physical part was over. Now, we just had to battle our thirst! Since we were away from the river, we didn’t have easy access to water anymore, and none of us had planned for an 11-mile day. This wasn’t on the original schedule! As a result, each of us had a Nalgene or two at best; not enough for a long day in the scorching sun.

I rationed my water, knowing that it would get uncomfortable but I would be fine. After we reached the rim, I had 32 ounces for the rest of the hike. Again, it was enough to keep me functioning but my mouth sure felt like cotton! 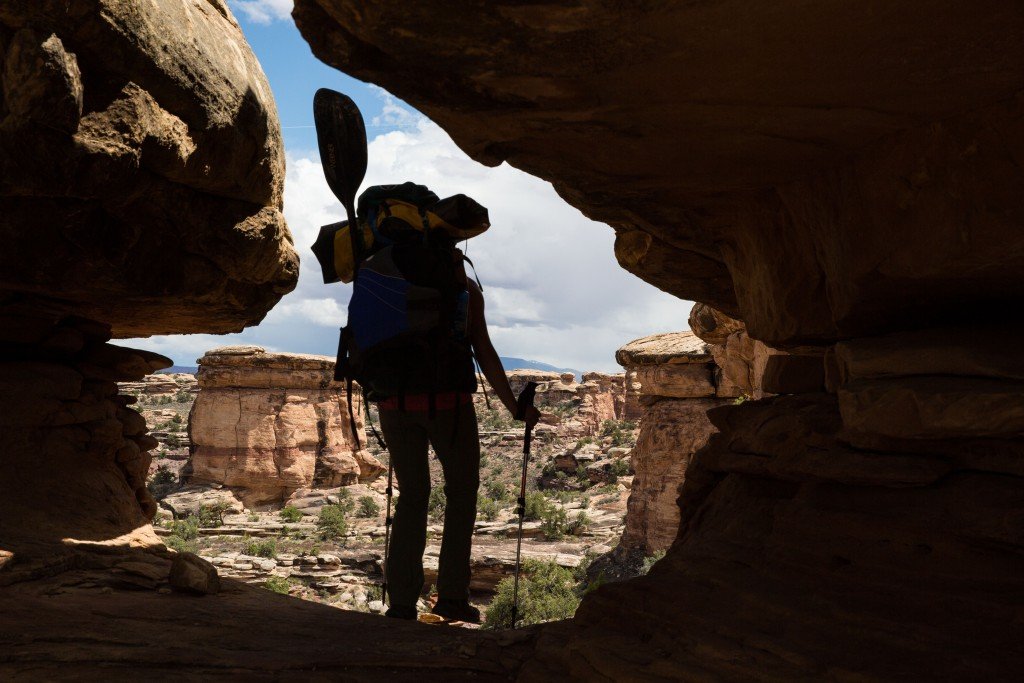 After what seemed like hours, we finally reached the parking lot and I feasted my eyes on the sweet sight of my Subaru Outback. Y’all, I’ve never been more happy to see my car!

Overall, we fared well. Andrew had hiked in river shoes since he hadn’t planned on the day from hell. As a result, his feet were covered in blisters. And while I was blister-free, my hips didn’t do as well. The heavy pack combined with the high temps led to a lot of friction. As luck would have it, my poor hips were rubbed to the bone: a bunch of skin had been torn off and blood was literally running down the side of my thighs. I’ve never had that happen before, so I’ll just chock it up as another tally in the comedy of errors that was Canyonlands!