And Then The Rains Came: Gates of the Arctic National Park

Parts one, two and three here.

After the morning grizzly encounter, we were all wide awake! None of us were too scared, but it was an easy reminder that our furry friends were likely closer than we had imagined. I reinstated my reliance on my bear spray and carried it with me absolutely everywhere. I also became more cautious about how deep into the bushes I went when I had to pee. Sure, no one needs to see me handling my business, but I’d rather my friends watch me take care of it instead of Mama Brown Bear! 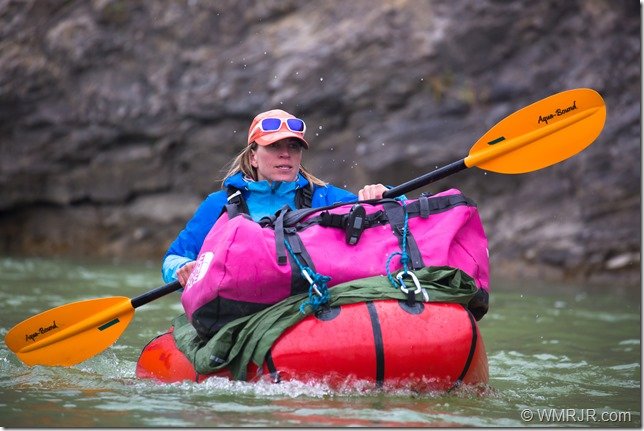 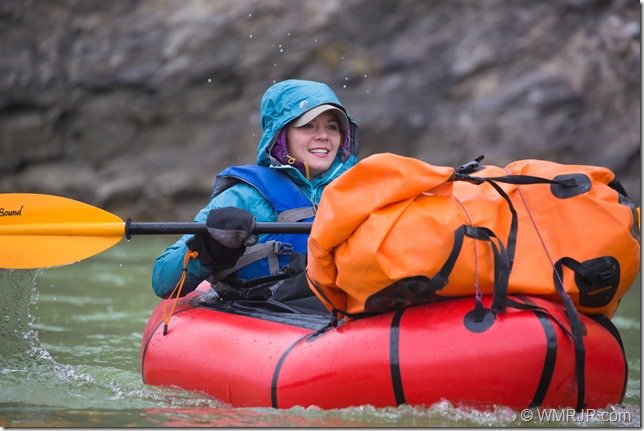 Yours Truly, Never Looking That Cool 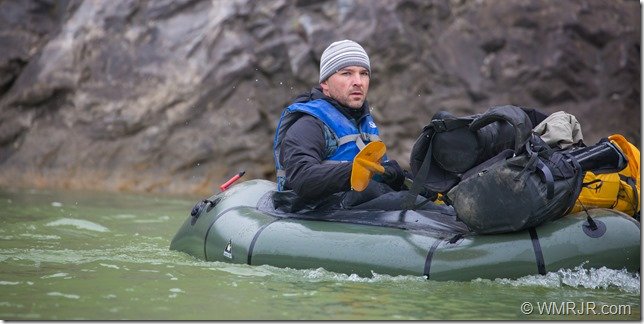 Shannon and His Steely Gaze 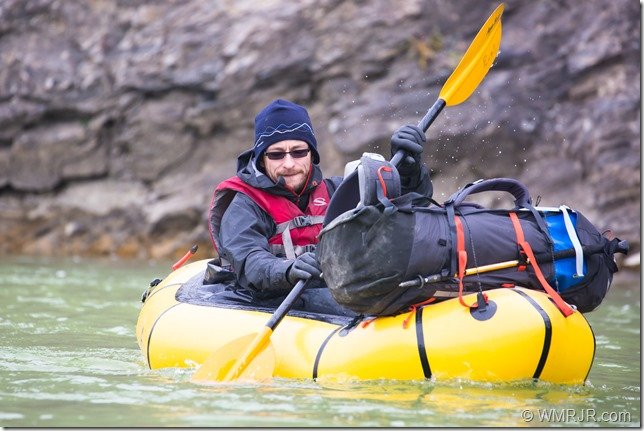 Drew, Getting Serious About the Paddling

We headed onto the river just like on Monday, but we realized very quickly that we were losing our picturesque Alaskan weather. The first few days had been filled with bluebird skies and bright sunshine, but we knew it couldn’t last. This was Alaska, after all! 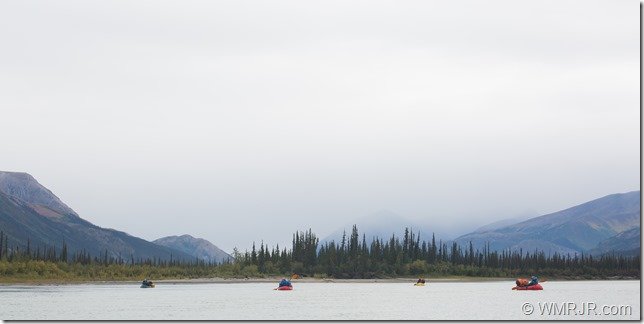 Sure enough, the day continued to grow darker and cloudier and we realized that it was going to start pouring right around 5pm. Instead of trying to tough it out, we called it an abrupt day, pulled up to the nearest gravel bar, and quickly set up camp with the hopes of getting everything constructed before the rains came. Luckily, Will is like MacGyver and was able to construct an additional makeshift kitchen shelter with our Exped tarp and a trekking pole. 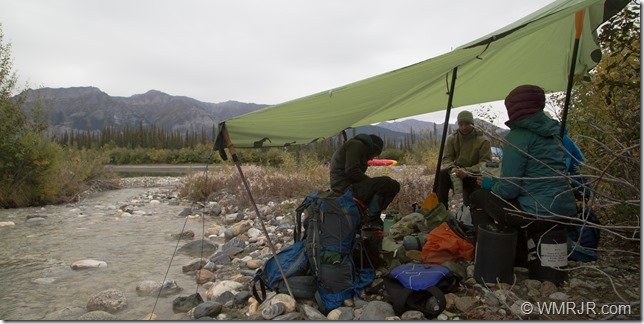 We were so thankful that he did because the rain started dumping soon afterwards, and we were happy for the coverage! The temps also dropped so the combination of rain and cold made the night a bit tougher to handle. Amy and I both came up with different solutions to ensure that we would sleep warmer than we had during the previous nights. She lined the inside of her sleeping bag with her emergency blanket, using the material’s reflective capabilities to bounce back her own body heat. I went with the tried-and-true technique of boiling water and shoving a Nalgene inside of my sleeping bag. And you know what? Both methods worked liked a charm and we each slept great even though the night hovered around 20 degrees! 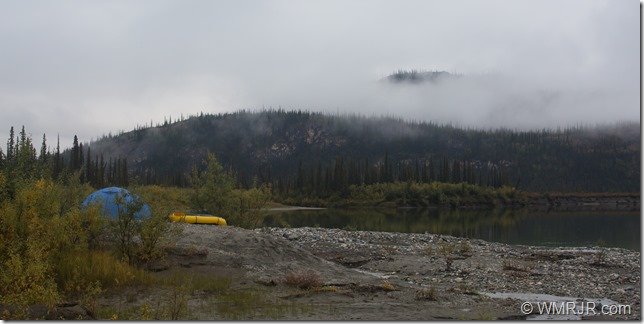 Wednesday morning arrived, gloomy, wet and quasi-miserable. The five of us immediately knew that Mother Nature had thrown us some uncomfortable weather and it couldn’t have come at a worse time. While hanging out in the tents to avoid the rain after dinner, Amy, Will and I spent some time analyzing our topo map. In doing so, we realized that we hadn’t covered as many miles as we had hoped. Based on our map-reading skills, we had 40 miles left before our pick-up site, and only two days to cover the distance. In short, we had lots o’ miles left! 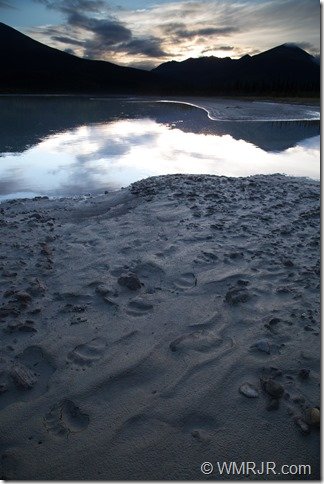 Normally, this would not be a big deal: sure, it was a lot of miles, but with daylight stretching into the early morning hours, it was totally doable. Unfortunately, the cold and wet weather made the day a lot worse than it needed to be. Temps dropped into the 40-ish range and rain poured down on us consistently throughout the day. We stopped for a brief lunch and huddled under the Exped tarp to wait out the worst rain of the trip. After awhile, everyone’s gear “wetted out”, or became so saturated that many waterproof materials couldn’t hold any more moisture. But, because we knew we couldn’t miss our bush pilot on Friday morning, we had no other option than to keep paddling.

We finally arrived at camp and quickly set up the tents. I scampered into my sleeping bag and stayed there for at least an hour, trying to warm up my body. 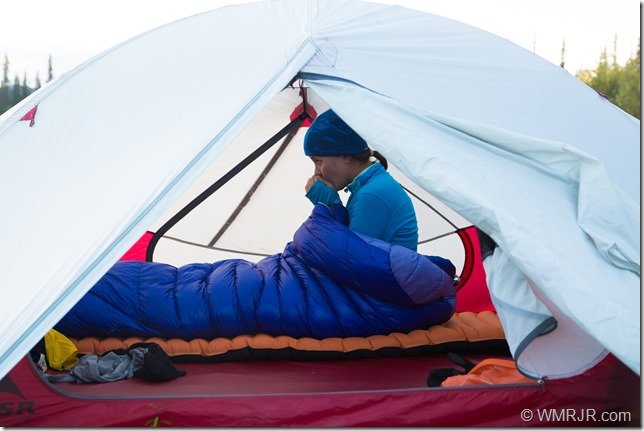 We went to bed that night hoping that Thursday, our last day on the river, would cut us a break!

Unfortunately, all of the consistent paddling started to take its toll on our bodies. All of us are athletes in various ways, but none of us paddle regularly, if at all. Because of the repetitive motion, bizarre injuries were starting to creep into our bodies. Will’s left forearm swelled up like a sausage and he could barely grip or hold anything in his left hand. My right arm kept going numb while I slept, only to wake me in the middle of the night because I felt like fire was running through my veins. I couldn’t even tie my shoes in the morning because the pain was too much. Amy’s gloves had wetted out so she was paddling bare handed, and as a result, the cold weather destroyed her hands and caused a bunch of skin to peel off. In short, we were falling apart! 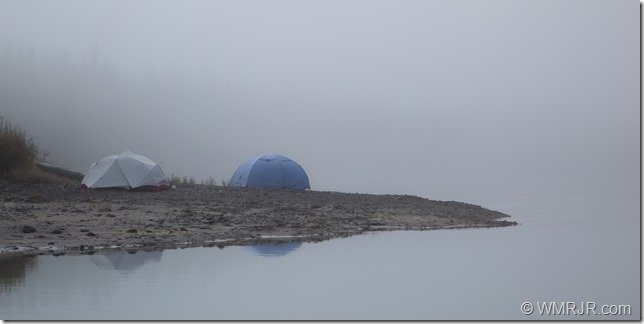 Will insisted the sun was coming out, but it took the rest of us awhile to see the sunshine through the mist!

However, there were still 20 miles to cover, so I awoke to Will’s voice on Thursday morning, claiming that the sun was fighting for a spot on the horizon. Sure, it was incredibly misty outside, but the rain had stopped and the sunshine was trying to come out!

Our spirits heightened and core temps increased, we climbed into our packrafts for our final full day on the Alatna. We tended to paddle in two groups, with Amy, Drew and Shannon in the front and Will and I in the back. Thursday was the same and we paddled along, enjoying our final day on the water. We had left Gates of the Arctic National Park on Wednesday, so we were now floating through the random tundra of the Arctic Circle. Once the sky cleared, we realized that snow covered the tops of the towering peaks. What we had received as rain had been snowflakes up above! 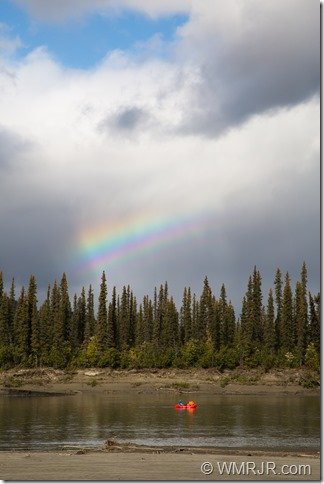 The scenery also changed once we left the park, and instead of the jagged mountains we were surrounded by steep river banks and colorful trees. We also managed to spot both a juvenile bald eagle and white wolf on our final day. To be fair, Will and I missed the wolf, but the front group spotted it while sleeping on the banks of the river. Unfortunately, it left by the time we paddled by, but I was still psyched that some of our group got to see such a rare animal.

We finally arrived at Malamute Fork, the location of our pick-up. Our packrafts were covered in mud and our clothes were drenched, but we were all bittersweet about leaving the paddling behind. None of us wanted to hop back in the boat, but it was somewhat sad to know we would be leaving the bush the following morning. In fact, Mother Nature seemed to think the same, and left us with a stunning sunset on our final night: 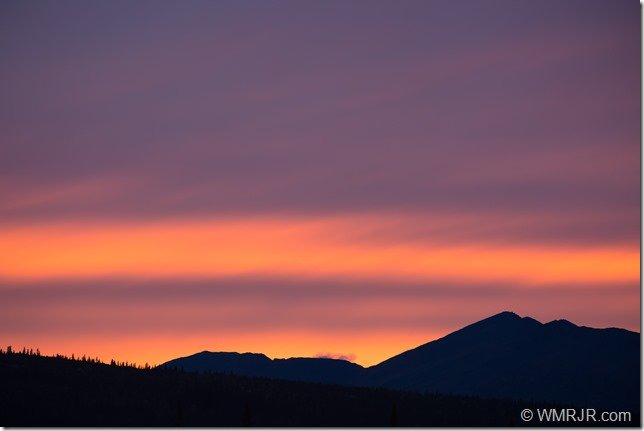 Sure enough, Brooks Aviation showed up around 11am on Friday morning, just as planned. 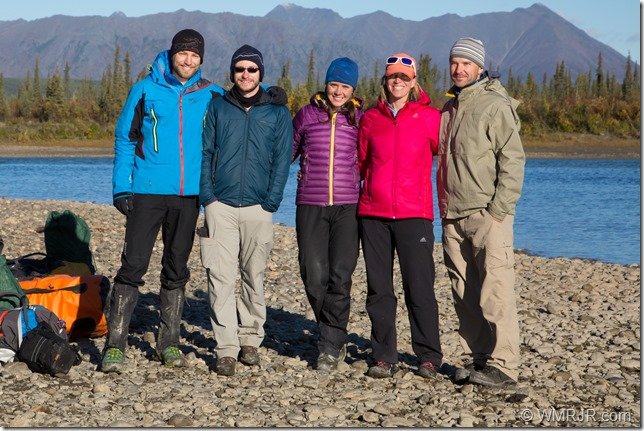 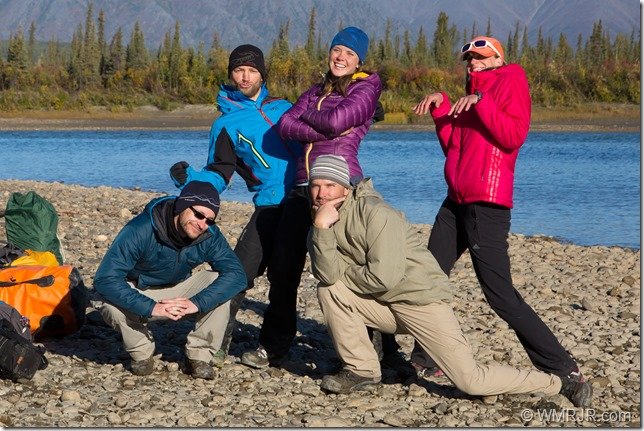 We tried to be a boy band….and Amy was just trying to be T-Rex. Don’t ask.

Turned out, we got incredibly lucky: a few parties had stayed in the north side of the park where we had begun, instead of heading south. All the rain we had paddled through had stayed up there as snow and the pilots hadn’t been able to pick them up. Four days had passed since their designated pick-up date, and Brooks Aviation was just then able to send in a plane for them! Can you imagine?! Sure, we all had brought extra food, but nowhere near enough for a sufficient four days. We would’ve been subsisting on 200-300 calories/day!

I’ve received quite a few questions about various aspects of the trip (i.e. Did you have a campfire? How did you inflate the packrafts? Where did you keep putting the bear canister? What is a bear canister?) I’m planning on answering them in a post later this week. If you have anything you’re wondering, let me know and I’ll do my best to answer it!

Gates of the Arctic: Packrafting the Alatna River & A Grizzly