Real Life Minus the Unicorns

Too often, bloggers and writers hide behind the façade of the written word. It’s easy to pretend like everything in life goes swimmingly and that the world is full of rainbows and unicorns. I like to think that I don’t pretend my life is perfect, but I also realize that I make a point to avoid the negative details on my blog. Everyone deals with shit on a daily basis, but who really wants to read about it? 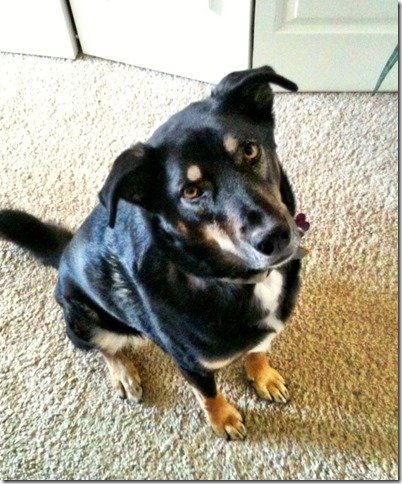 Luckily I always have this adorable face to cheer me up!

Here’s the story: I went for a beautiful 8-mile trail run on Saturday morning and had an awesome time with my two favorite friends in the world. After we finished, I noticed I was really achy but I chalked it up to pushing it too much while running. Two thousand feet of climbing in 4 miles is nothing to scoff at, right? Nothing a few beers couldn’t solve?! We enjoyed a beer at an outdoor patio and while fun, I was oddly shivering. Weird.

Long story short, I went home, took my temp, and realized I was carrying a low-grade fever with a scratchy throat. As the weekend progressed, so did the symptoms. My temp jumped up to 102.6 and my throat grew so inflamed that I literally couldn’t swallow without tearing up. I was miserable!

Will was gone all weekend so I suffered with Tals until he got back last night. Y’all, I have never been more relieved for company; I will even admit to semi-crying when he walked in the door. I was just so happy to see him!

All the symptoms carried into this morning so I succumbed and had Will make a doc appointment for me. I was hoping for strep: at least that is a finite window of sickness! Sadly, it’s not strep…and the docs are still trying to figure it out. Apparently, I’m dealing with the same mysterious illness that I had for five weeks this past winter, with a couple differences: achy joints and temps swinging from a chilly 96.1 to a toasty 103. What’s a girl to do with that?!

In the end, the doc decided to take a separate culture and send it into a specialist for analysis. Experiencing such extreme symptoms on three occasions within nine months isn’t the norm, you know?

In the meantime, I’m fairly miserable. They put me on meds to curb the pain and some other crazy steroids to take down the swelling in my throat. They also pulled me from any physical activity until further notice….meaning I don’t get to compete this weekend.

Remember awhile back when I mentioned how excited/terrified I was to participate in my first CrossFit comp, Girls Gone Rx? Sadly, the big day is this Saturday which definitely falls within the doctor’s off-limits category. I supposed I could ignore her orders like I see so many bloggers do, but that’s not my style. Her {very slight} concern is that something internally is manifesting itself with my symptoms, so she doesn’t want me to potentially exacerbate anything until we know what’s what. So, CrossFit comp = out. I had to tell my teammates earlier today and once again, I shed some tears. Man, I’m a big ol’ cry baby lately!

So, that’s my deal in a not-so-succinct nutshell. I’m sure I’ll be back later this week once the meds mask the discomfort and I’m feeling sprightly again. Until then, thanks for listening to me whine!

Live Premiere: I Am #OmniTen