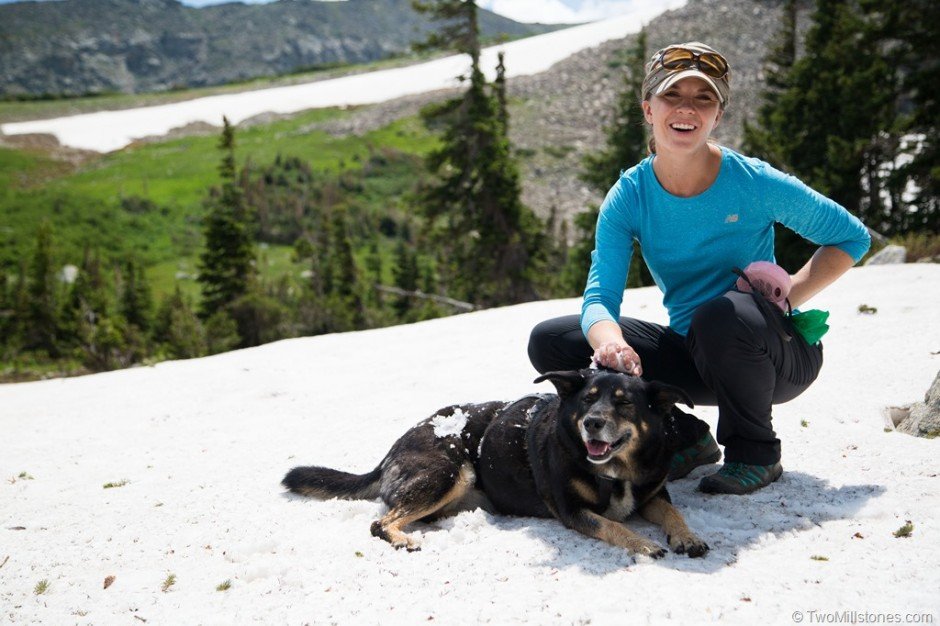 It all began a few months ago when some friends had to cancel their trip to Colorado. Instead of being sad, Will decided to turn our already-blocked-off weekend into a local microadventure: more backpacking!

We scoured maps, read trip reports and debated over which trails would have the softest conditions since I knew I wanted to bring Tals. In the end, we opted to stay close to home and chose Red Deer Lake in the Indian Peaks Wilderness! 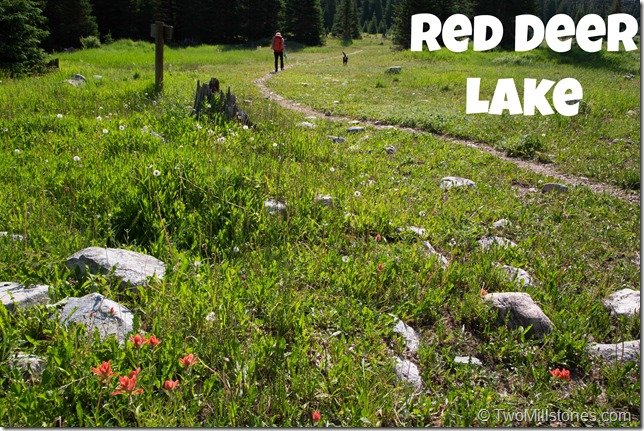 Indian Peaks is a 76,000-acre wilderness that is just south of Rocky Mountain National Park. I love the park, but you can’t backpack with dogs, so we knew it was out. Will found the Red Deer Lake trail and when we realized it was a mere 75-minute drive from our door, we were hooked. Close to home and dog friendly?! Winning. 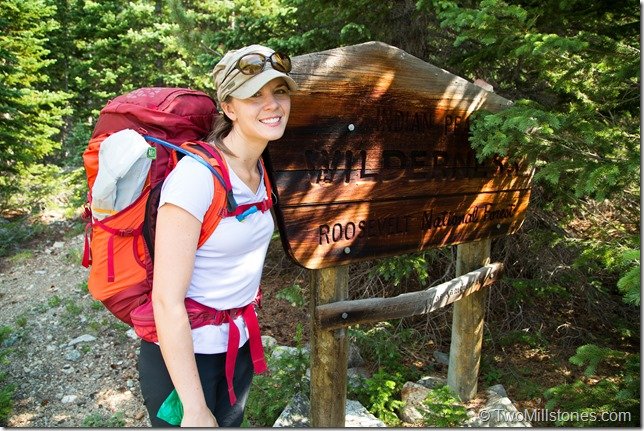 {Side note: permits are required for backcountry travel between June 1 and September 15. We got ours at the ranger station in Boulder.}

Naturally, we roped some friends into joining so we all bailed on work early, piled in our cars, and drove to Camp Dick, the start of the trail. {And yes, we all hesitated to enter that trailhead into our GPS for fear of what would pop up….get it?!} The hike in was a mellow ~7 miles with a mere 1900 feet of elevation gain. The first half is largely flat with the majority of the gain near the end. Regardless, the trek is all below tree line which makes it a great option for pups!

We hiked the first couple miles quickly, laughing and chatting as we watched the ominous dark clouds roll in. There was no way to avoid it: we were going to get wet! Fortunately, the rain came hard and fast, but passed just as quickly. Once the clouds cleared, we were treated to a beautiful rainbow and sunny skies! 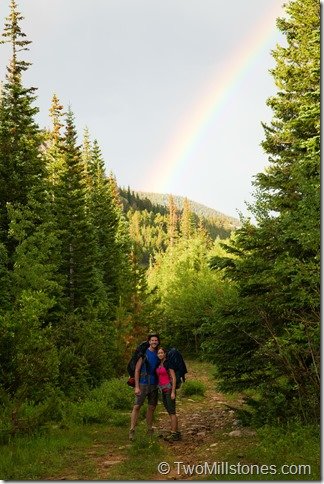 We eventually came to a beautiful meadow filled with wildflowers. I was half wishing that we would see some large wildlife but also thinking that it would be better if they stayed tucked away. Tals has no fear when it comes to animals, and I dread to think what will happen if she ever encounters a bear! Fortunately, bear poop was all we found, so we continued trekking…. 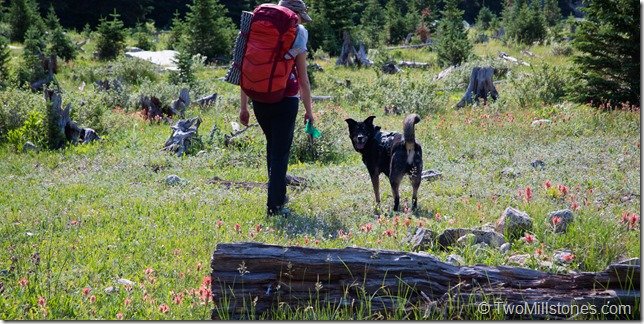 ….until we couldn’t! At roughly 5.5 miles, the trail forks and we veered left towards Buchanan Pass which was also how we reached Red Deer Lake. I took one look at the large and surprisingly full river and immediately had one thought: there was no way Tally would get across! 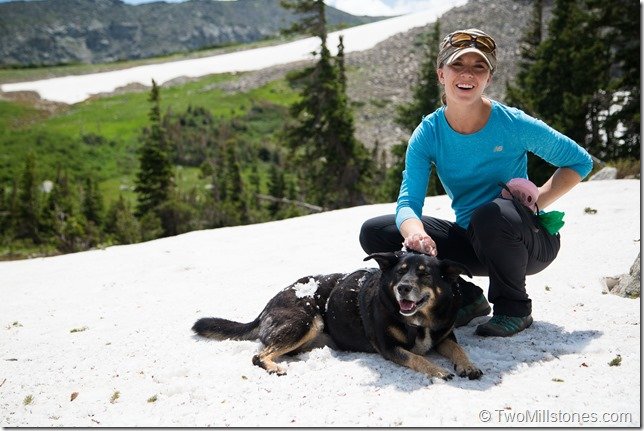 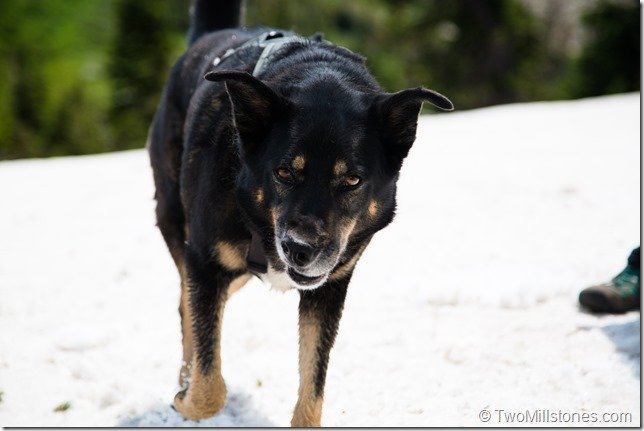 ….even when she gives me sass!

At some point, hospitable hikers had created a semi-bridge over the water, but it was only passable for people. A single log reached to the midway point in the river where it rested on a pile of rocks. From there, another single log had been stretched across to the far shore. That would’ve been tough enough, but the high water levels had crushed the second log, and it was perpendicularly bent with the middle resting in the fast-moving water.

Caryn, Marc, Chris and Will carefully picked their way across the logs, being careful to not fall in. The water wasn’t deep, but it was pure glacial runoff; cold! I had already surmised that Tals wouldn’t be able to cross on the logs, so I began stripping off my shoes and socks and rolling up my hiking pants. Does this sound familiar to anyone else?! 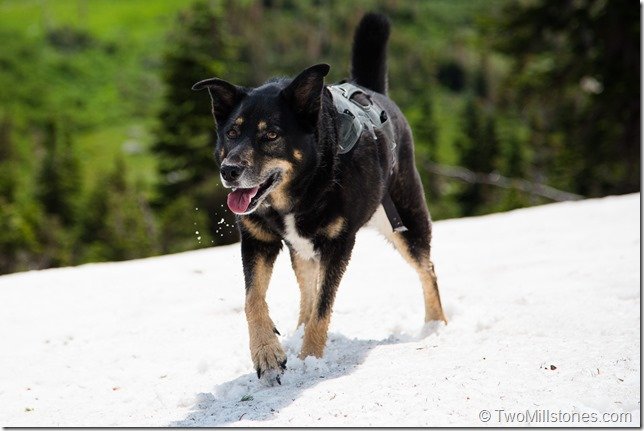 I’ve been down this road with Tals, but at least I was more prepared this time. She was wearing her Ruffwear Palisades Pack, so I unclipped the backpack and chucked it across the river to Will. She was wearing her harness underneath which thankfully has an “oh shit” handle on top. Trust me: this handle makes a world of difference!

I climbed into the water, trying not to slip on the slick rocks while cursing a blue streak. Tals easily made it to the rocky island in the middle, but the second log was not going to happen. She took one look at the log as it dropped into the river and totally panicked: she flopped down on her stomach, eyes wide, and essentially hooked her little paws into the rock. I knew that face: girlfriend wasn’t going anywhere!

I sighed, grabbed her harness, and guided her back to the closest shore. We spent a solid 15 minutes walking up and down the banks, trying to find a shallow area where there was less water. Not only did we not find anything, but my feet were also wrecked. My shoes were still on the opposite bank, so I was crunching around Indian Peaks in my bare feet. My toes had gone numb in the water so I couldn’t feel anything, but I knew it couldn’t be pretty!

After realizing I couldn’t cross anywhere else, Tals and I walked back down to the bridge to deliver the news. I offered to hike back to the car with her so they could keep hiking but of course, everyone turned me down. Will and I agreed on a last-ditch effort: we would try to shovel her across the bridge one more time before totally calling it. I still had a bit of faith in my furry companion!

Again, she crossed the first log with no problem, but went into panic mode once she reached the middle of the water. Fortunately, Chris and Marc had been doing some serious construction and come up with a plan: they placed another solid log across the broken log, creating a level plane. They also added a tree branch for a hand rail! 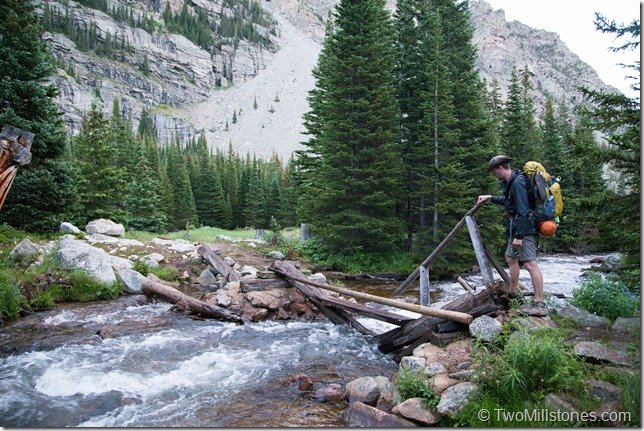 Post-crossing. See the log the guys placed across the broken part? And the hand rail? Newly improved!

I lifted Tals onto the new log, taking a few panicked kicks to the face! Will used his longer arms to reach her across as far as he could where Marc did the same from the other side. She looked terrified but I watched as she sucked it up, worked up her courage, and crept across the gap between the two men. When Marc grabbed her, I breathed such a sigh of relief. Baby Girl had crossed!

With the excitement behind us, I quickly re-shoed and socked my torn feet and we completed the hike to the lake in the dark. We were all fairly exhausted and I know that Tals was definitely traumatized. We crammed some food in our mouth, quickly pitched our tents in the dark, and crashed for the night. 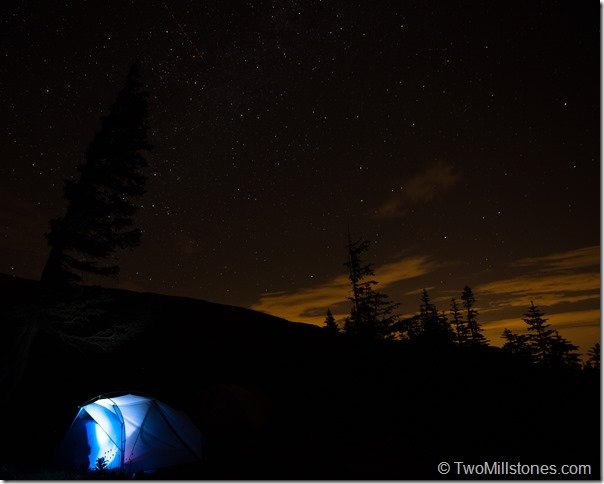 Will wanted me to be clear that he thinks “this photo is stupid.” But I like it and my blog, my rules!

Early morning came as Will set his alarm pre-dawn to snap some photos. {That man, I tell you!} I’m pretty used to his antics so I immediately fell back asleep and didn’t wake up til the warm sun hit my tent. 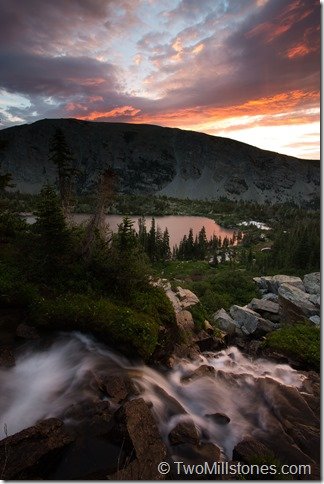 Sunrise on our campsite at Red Deer Lake

Saturday was about as perfect of a day as I could imagine! We slept in and enjoyed a decent breakfast with some french press coffee. Marc spent the morning fishing at the lake to no avail, and we finally motivated at noon to hike up to the Continental Divide. I even got to be lazy: Will wanted to bring his camera gear so he threw my snacks and jacket in his backpack. I can’t remember the last time I got to hike without a backpack! 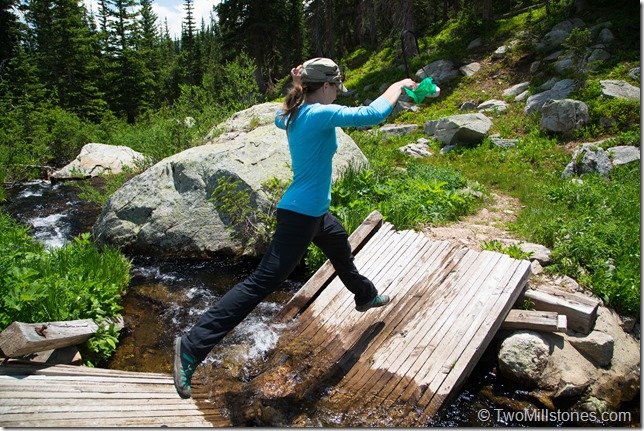 Crossing another bridge on the way to the Divide. I could handle this one!

We did a 5 mile hike but never made it to the top of the peaks. Another storm was rolling in and the sky was getting black. Since we were hiking above tree line, we opted for safety over glory and hightailed back to our tents. Everyone was feeling lazy so the rest of the evening was spent reading, snoozing, and of course, Will snapping more photos! 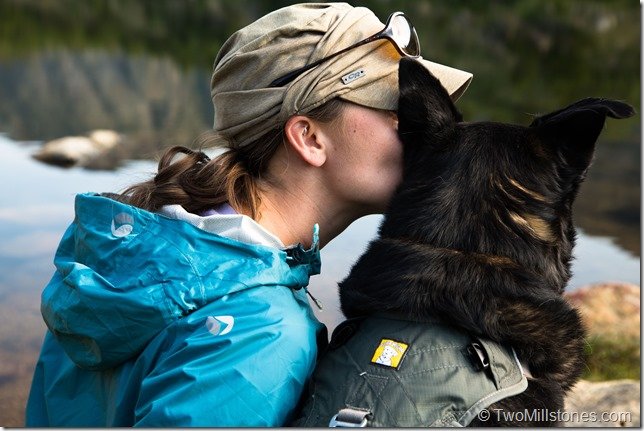 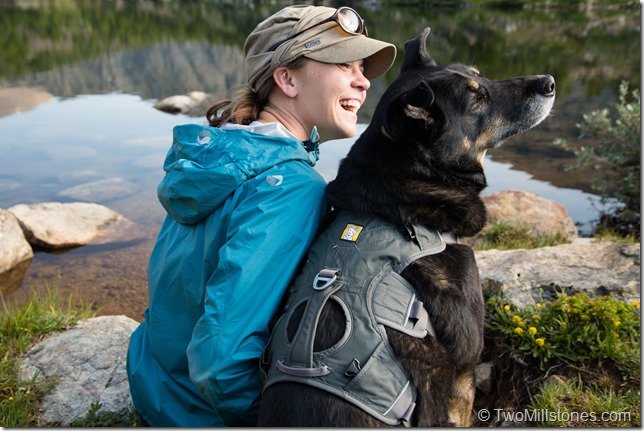 Can’t tell if she is being sassy or searching for sun rays!

I tend to avoid Indian Peaks because it is so close to home and I get that semi-arrogant attitude that I can find something cooler or better or more extreme. But, as Brendan Leonard told me in a conversation, “We’re pretty lucky when we get to say we JUST went to Indian Peaks for the weekend!” The area is absolutely stunning and I am honestly kicking myself for not visiting more. I suspect more trail runs will be happening there in the future!

If you could camp/backpack to anyone place in the world, where would it be?

Yoga on the Rocks