**Once again, all photos by my lovable boyfriend of WMR Photography. Don’t want y’all thinking I finally got talented with a camera!**

I left y’all yesterday after Tally finally managed to squash her fear and conquer the water crossing. I’m pretty sure she was equally shocked and psyched because she was prancing all over the river bank, shaking her little butt and wearing quite the doggy grin. Obviously, I was very glad that she had made it across, but I was too busy chattering to give her a lot of loving! My feet were a lovely shade of white and I could not get them to warm up. Will and I sat in the sun and passed a good 20 minutes with him rubbing and blowing on my toes, trying to get circulation back into them. Luckily, they warmed up and we were able to set back on our way! 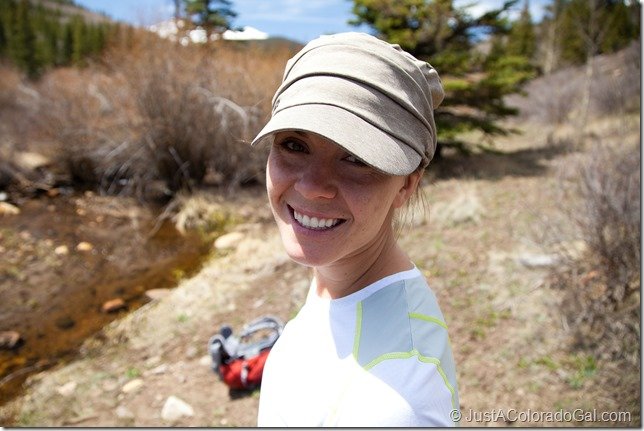 Many trip reports claim that hikers prefer to do this loop in a counter-clockwise fashion because they don’t want to deal with the final ascent into Buffalo Meadows. Honestly, the final climb is truly nothing major and was so worth the solitude. Sure, it was a bit of elevation but it was absolutely nothing when compared to other local hikes. Plus, the view when we finally reached the Meadows was incredible. I love wide open spaces with big Colorado skies! 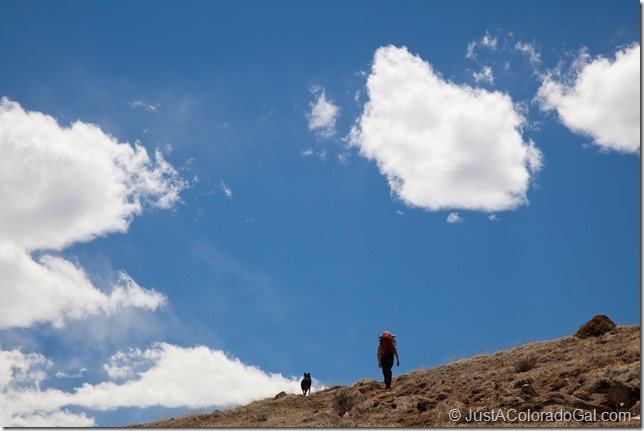 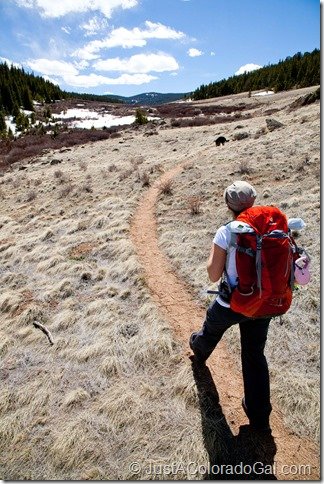 We had met an older couple down below who had recommended a camping area that was tucked away from the trail. We followed their instructions and quickly found ourselves on a small bench, nestled up behind the trees while still enjoying a small glacial stream a couple hundred yards away. We easily set up the tent and sleeping bags that I was testing, and enjoyed a night of peace and quiet. Unfortunately, Tals had somehow managed to shred her paws again, so she and I spent quite awhile working on a little puppy TLC and cuddling. Turns out, Tals definitely needs dog shoes in her old age! 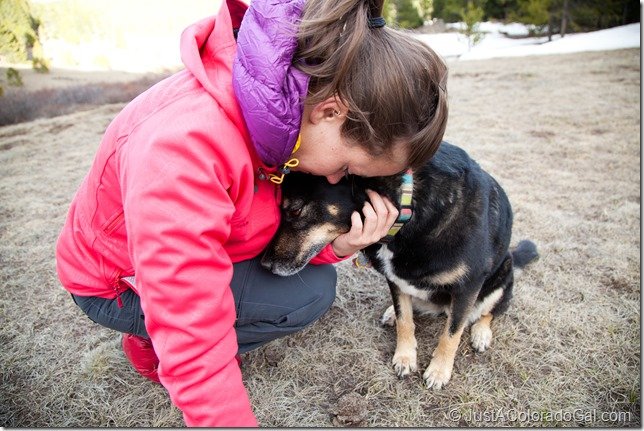 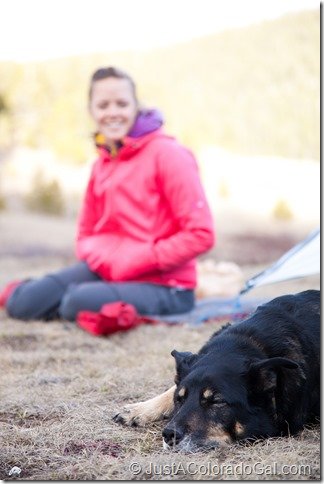 Will took off into the valley to shoot some sunset photos, and Tals chose to go with him even though I tried to make her rest her paws. Instead of following, I enjoyed the utter stillness of the meadows while watching the sun disappear for the night. There is nothing like the silence of the mountains and the alpenglow in Colorado is absolutely stunning! 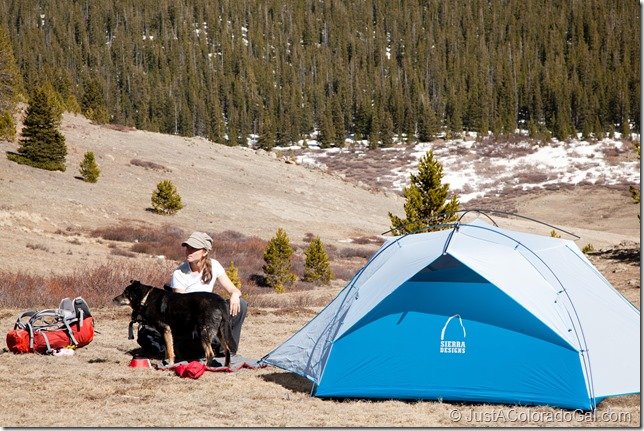 I think this is when Tals saw a deer!

Sunday morning dawned sunny and warm, and we quickly stuffed our faces with oatmeal and Pop Tarts (sidenote: that will be the last Pop Tart I ever consume. My lungs went bananas after that!) We efficiently cleaned up camp, ensured that we had left behind zero evidence of our existence (as per Leave No Trace), and headed off to complete the Rough and Tumbling Creek Loop. We figured we were halfway through the loop so we should easily get back to the car by noon, ensuring that we would make it to the afternoon BBQ on schedule. In retrospect, this makes me laugh! 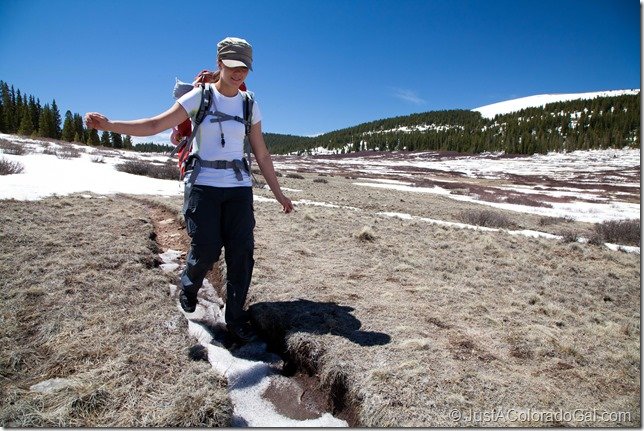 Truth: this is the only front photo of me because all of the other ones had wicked unflattering stomach bulges over the waist belt. Totally inevitable with a pack, but I just couldn’t bring myself to post them!

We passed a group within a half mile and we turned to see one of the men chasing after us. We stopped so he could catch us, and spent a few minutes chatting trail beta. He had wanted to ask us how our half of the loop had been in terms of snow, and we told him that there wasn’t any. He looked relieved – too relieved, in hindsight! – and explained that their Saturday hike had been filled with lost trails, tons of snow, and post-holing for days. Naturally, this was the part of the trail we were heading into, so we briefly debated turning around and retracing our footsteps back in the direction we came from. However, I really didn’t want to get Tals across that river again, so we decided that the snow couldn’t be that bad… right?!

The first mile was easy and Will and I happily chatted, confident that we would be back at the car in no time. However, once we ducked into the trees, the snow levels started to build and we were soon tromping around in knee-deep snow drifts. Ironically, I had chosen to leave my gaiters in the car like a moron, so I had nothing to protect the snow from sliding in over the tops of my boots. On the other hand, Will had remembered his gaiters but hadn’t been able to find his waterproof boots, so his feet were completely soaked. In short, we sucked at preparation! 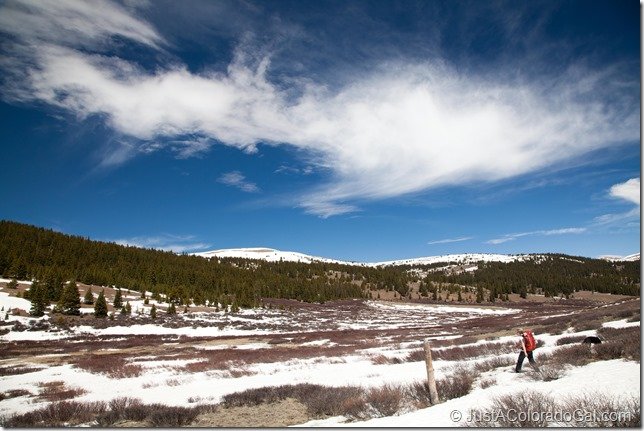 As the snow grew deeper, the trail completely disappeared and we discovered we were basically hiking in a “choose your own adventure” novel. We figured we would just follow the post-holes steps from the crew that had trekked in the day before, but sometimes those footsteps were damn near impossible to find! We’d occasionally come to a dry patch where the snowy footprints vanished, and we’d have to split up so that we could both scour the mountainside in search of the continuing footsteps. Without them, staying remotely on trail would’ve been incredibly tough.

We continued like this for hours, crushing through snow that grew invariably deeper and more painful on the skin. Will broke trail for a lot of the morning, largely because he would fall right through my footsteps anyway since he weighs so much more. Unfortunately, he has a good half foot on me in terms of height, so some of the drifts were much deeper on me than they were on him! I can remember at least a dozen times where I fell through snow up to my hip bones, floundering around while trying to crawl my way out. It would truly be pathetic if it wasn’t so funny! Tals, of course, was loving life and enjoying the fact that her 60 lb. body didn’t sink in the snow at all. She would walk across the drifts and turn her head to look at us, almost as if she was asking, “Guys, you going to pick up the pace anytime soon?!” When she did fall through the snow, the vindictive side of me giggled because she could finally understand an ounce of what her mom and dad were dealing with. Is that wrong?! 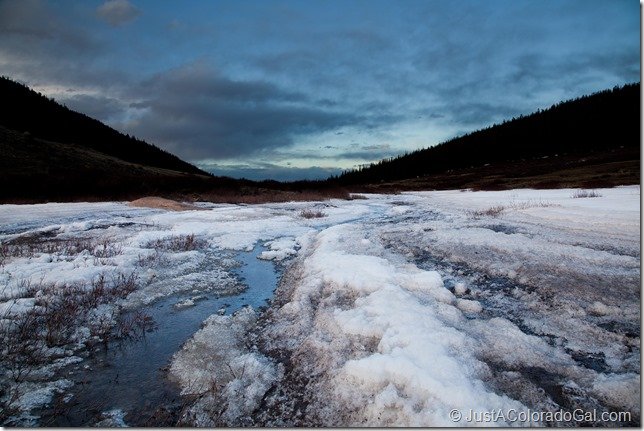 We finally crept out of the trees and into alpine tundra filled with willows. We had hoped that the snow would disappear since it was exposed to more sunshine, but alas, that wasn’t the case. Additionally, we had absolutely no idea where the trail was, so we were just hiking by our general sense of direction at this point. Good plan, eh? We knew we were close and that there was a bridge crossing the river that we needed to find, but we couldn’t locate the damn bridge. We waded our way down to the stream in hopes that hiking alongside it would finally get us to the bridge. Unfortunately, we then saw some day hikers on the opposite side, trekking upstream towards where the bridge was actually located. Apparently, we had overshot the crossing while stumbling around in the snow, and we would have to make our way back up-river in knee-deep drifts in order to find it.

Truth? There was no way we were backtracking! We knew we were within a mile or two of the car and that the rest of the trail was sunny, hot and dry. Because of this, we decided to screw the bridge and cross the river ourselves, completely dressed in our socks, boots, and pants! This wouldn’t be ideal under many other circumstances, but for that particular day, it was an acceptable decision. Plus, I got to help Tals cross yet another scary-for-her stream. 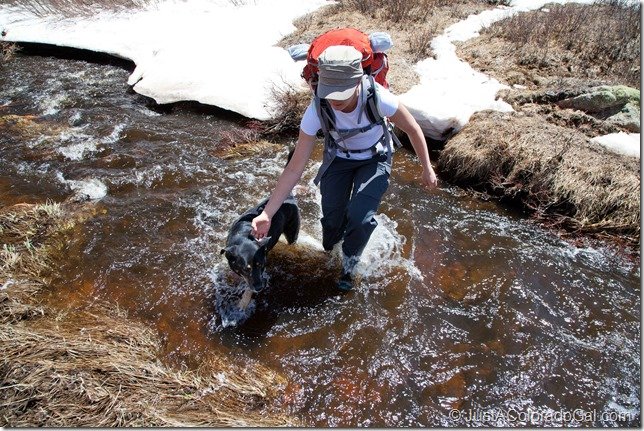 Unfortunately, I was testing the Salomon Synapse boots which are legit waterproof (review soon in Active Junky’s upcoming Women’s Backpacking Gear Guide!) This meant that the water didn’t really want to leave my boots either, so I spent the next hour sloshing around in water-logged shoes. Honestly, I didn’t mind because it was so hot and dusty outside, but I sure did have wrinkly feet when we finally reached my Pathfinder.

In short, this is an awesome backpacking loop for anyone in the beginner-intermediate category that is looking for a basic overnight trip. Because of its relatively easy distance, you don’t have to carry a large pack and the solitude is beyond rewarding. Give it a shot!

What’s your best outdoor adventure-gone-awry story? This can be running or biking too!

Rough and Tumbling Creek Loop in the Buffalo Peaks Wilderness: Part I

I Am Going, Going….Back to Haiti!