That Run That Couldn’t Have Gone Any More Wrong

Something weird happened this week: instead of going to CrossFit as I typically do on Wednesdays, I felt like running. At first I argued with myself but then I realized that was stupid. If I wanted to run, why not do it? So, I vetoed the gym and headed to an open space area that Tals and I both love. I knew we didn’t have tons of time because I was meeting my sis and a friend for dinner, but we still had plenty of time to get a few miles in.

So, we loaded in the car and drove the 5 minutes to the trailhead. I realized immediately that I was off to an auspicious start when Tally SPLIT MY LIP OPEN just as we got out of the car!

I let her out of the back of my Pathfinder and in doing so, dropped my keys. I bent over to grab them just as she jumped up in the air to do a 360 of happy excitement….and CRACK! Her head went right into my face, causing me to chomp down hard on my inner lip. Immediately, the inside of my mouth swelled and blood began running down my chin. Seriously! For a second, I thought I was going to need stitches but I quickly realized that it was just bleeding a lot because it was on my head—the cut truly wasn’t a big deal. So, I sucked it up (literally and figuratively!), locked my car and hit the trail with my abusive pup. 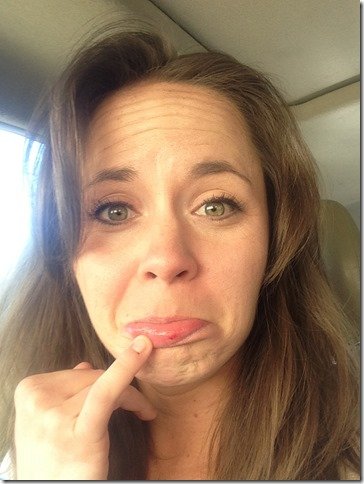 For the record, this was way later and I swear it looked worse at the time

We got approximately a half mile out when I hear a tinny female voice in my head say: “Battery Low.” What?! Turns out, I’m an idiot who shouldn’t be trusted with technology. I’ve been testing a new pair of wireless earbuds and apparently, you have to shut them off when you’re done. (Who knew? I just thought I needed to disconnect them from my bluetooth!) They had been running since the last time I had used them, draining the battery. Of course, this wasn’t a crisis but I had been looking forward to my tunes. Again, I decided to suck it up, enjoy the taste of blood in my mouth, and listen to my playlist while I had it….not a big deal!

I ran for another mile or so, battling some atrocious winds that we’ve been getting here in the city. The wind was whipping me around, making me crankier and crankier and even Tals was looking at me like, “Seriously mom?” I felt my nose begin to run and in an ever-classy move, I decided to just blow it all out of my nostrils. When you’re outside, it happens, you know? Snot rocket? Anyway, it was a complete fail as the snot caught in the winds and blew back all over my face. For reals. I even had snot smeared on my glasses!

At that point, I was so flipping disgusted and just plain over it that I decided to call the run and turned around. My face was covered in smeared blood; my music was flaking; I couldn’t see through the snot smeared on my sunglasses; and the winds were damn near knocking me over. 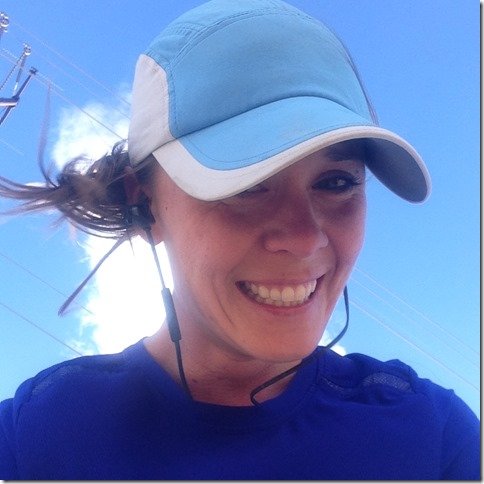 This photo was a lie: I wasn’t this happy!

Of course, my decision was cemented when I heard that tinny voice in my earbuds say, “Goodbye” as they totally lost battery. Again, I could have handled running in silence (as I frequently do) except for this time, my Polar HR monitor/GPS was going bonkers. I managed to press all the buttons while working on some Oly lifting on Sunday at a CrossFit clinic, and ever since, the damn thing keeps randomly beeping. Now that I was running in silence, it decided to pick it up a notch and blessed me with a symphony of consistent beeping patterns for the entire rest of my run.

Ironically, I’ve been thinking about running a lot lately and have even been longing for the drive and determination to conquer big things with my own two legs! Heidi has been persistently enabling me to tackle some rather large goals this coming spring (still a secret until I decide!), and I must say that I am really thinking I might go for it. I need to get my running legs back to even begin to think I can handle anything, so I’ve decided to do something that I don’t typically do: set a monthly goal. Whhaatt?!

I know, right? I don’t do resolutions and I have literally never set a monthly goal for running. However, I need to find my consistency again and I’ve decided a goal is just the ticket! And don’t laugh, because it’s really not that impressive:

Yup, what some of you run weekly is what I’m shooting for this month. You see, I know I’m not giving up my three days/week at CrossFit. At best, that gives me 2-3 days per week of running, excluding hiking, backpacking or skiing. Plus, I think this relatively mild and easy target will be just what I need to get back into a consistent pattern of logging some miles. I guess time will tell, huh?

What are you up to this weekend?

When was your last disastrous workout?

My Saturday at the Gas Station