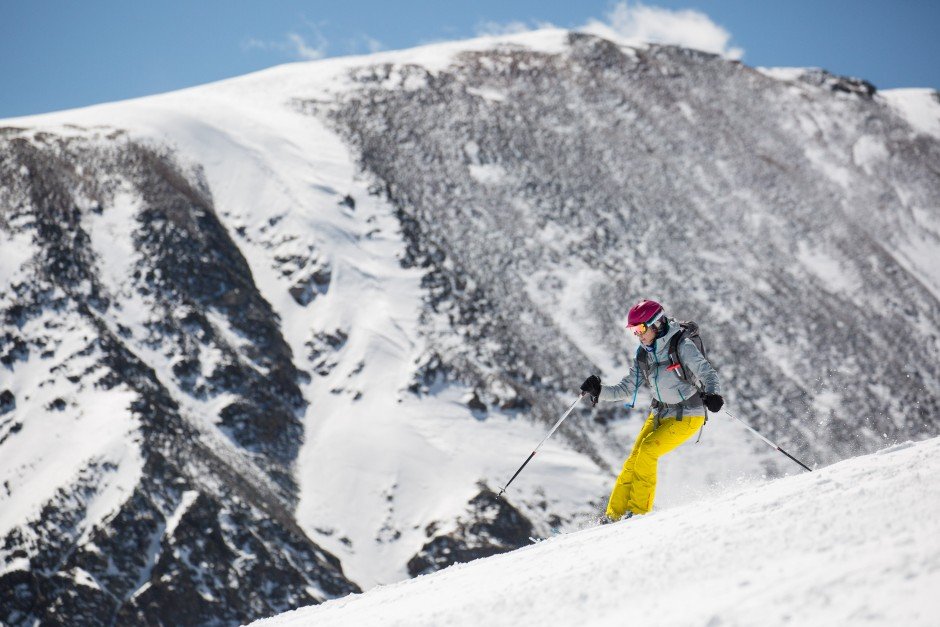 Whew! It’s been a hot minute, hasn’t it? Fortunately, the adventures are aplenty– it’s just that time to write about them is lacking!

Ever since college, I’ve been on a mission to summit all of the 14ers in Colorado. To date, I’ve tagged 41 of the state’s 53 peaks. In fact, I’ve been up some of the easier ones multiples times! {I hiked Gray’s Peak three times last year alone.} However, my wanderlust and curiosity has grown and I decided I wanted to climb a 14er in a different fashion: on skis!

Lou Dawson was the first person to ski all of Colorado’s 14ers in 1991. Since then, outdoor enthusiasts have taken to the high-altitude mountains during the winter months, all in the name of adventurous skiing. Over the past year, Will and I have become more interested in backcountry skiing so we decided that 2015 would be the season to give it a shot.

I asked around and received a unanimous response: Quandary Peak {14,265 feet} was the best 14er to target for our first attempt. We opted to wait until spring when Colorado’s notoriously dangerous snow pack is considerably safer, and chose a weekend: March 28 was the big day. 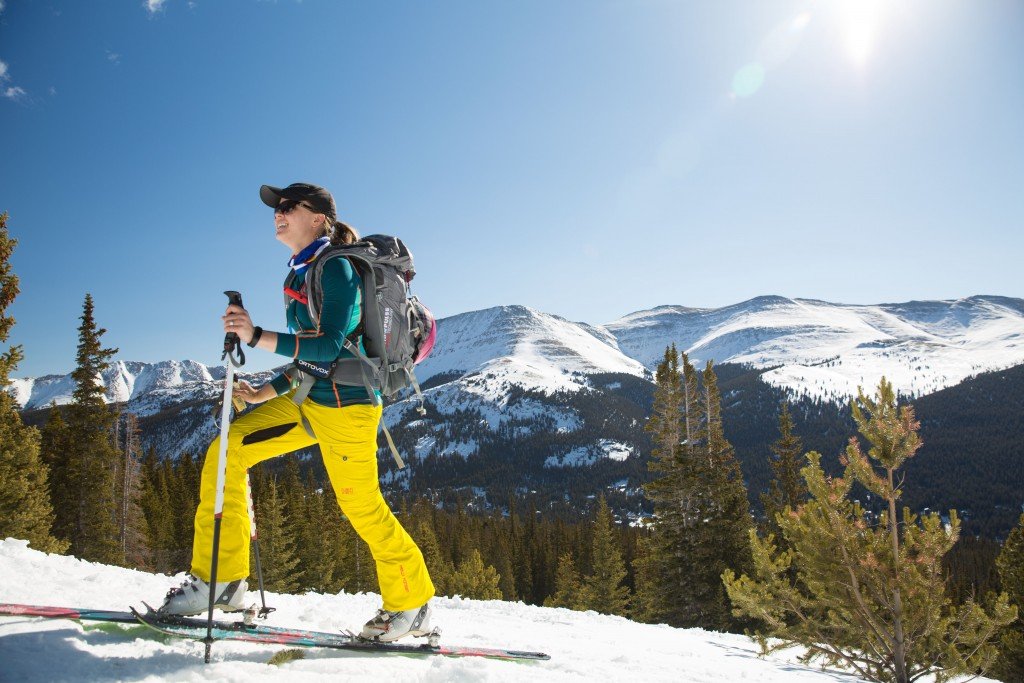 I’ve summited Quandary Peak twice: once via the East Ridge {standard route} and once via the West Ridge. Again, popular opinion was that the East Ridge would be ideal for beginners so Will and I decided to listen to our friends. I was headed back up to Quandary!

Saturday dawned beautiful and bright with nary a cloud in the sky. We set our alarms for 4am and reached the trailhead {10,850 feet} by 8:15. After loading up our avalanche backpacks with extra gear and food, we threw our skins on our backcountry skis and hit the trail.

Almost immediately, we became confused as we followed some knowledgeable-looking skiers up a fire road that was not our trail. Fortunately, we realized our mistake within 10 minutes and promptly turned around to head back to the correct trail. With such a daunting task ahead of us, I didn’t want to tack on additional elevation gain! 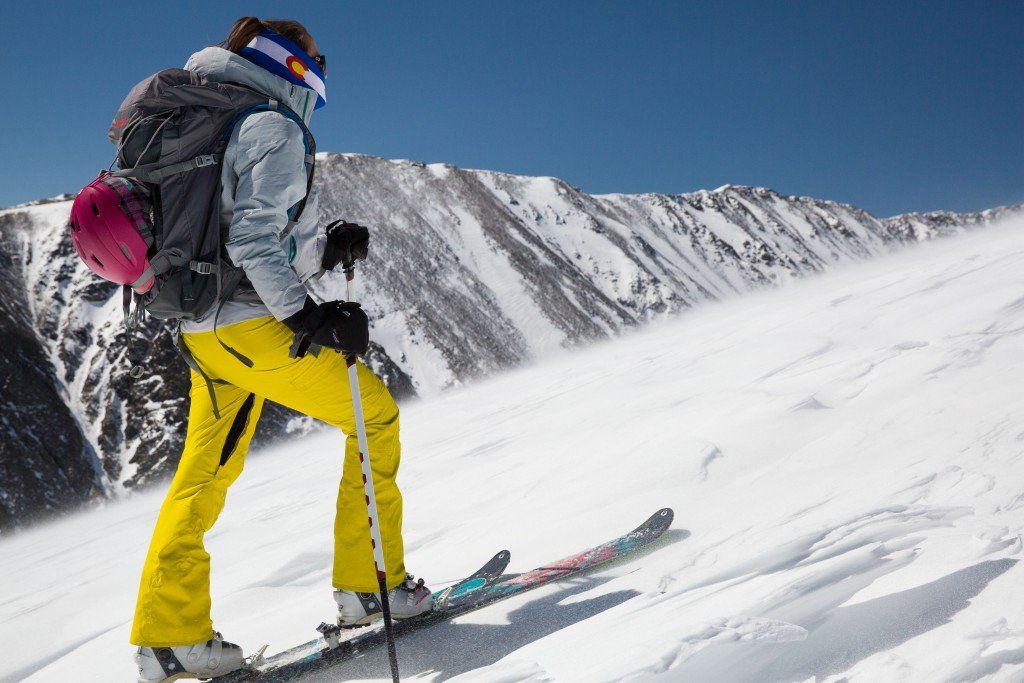 The trail was patchy at the bottom so Will and I had to “choose your own adventure” in order to avoid the dirt on our skis. However, that only lasted for a half mile before the snow grew thicker and we could easily slide along the trail. My heart rate increased as I climbed through the trees, and I was down to a single baselayer by the time we reached treeline.

When we originally devised the plan, I set a goal for myself of making treeline. I had woken up with a wicked sore throat and congested sinuses, so I wasn’t sure how my body would handle the altitude. I checked in with myself at 12k and while not great, I was still in okay shape, so I altered my goal. Instead of treeline, I was shooting for the ridge at 13,100 feet.

Once we climbed above the trees, the views opened up and the scenery was insane! The surrounding mountain tops were all covered with snow and the bright blue sky glistened in contrast. The wind also picked up so I was forced to put my shell jacket on to block my core from the blistering gusts. We later checked and those winds were gusting around ~50mph! Of course, the shell made me overheat so I had to remove my hat, exposing my face to the hot sun. In the end, I kept the shell on, opened my pit vents for some air, and pulled my Buff over my ears and the lower half of my face. Fashion statement, it was not. But my face didn’t burn! 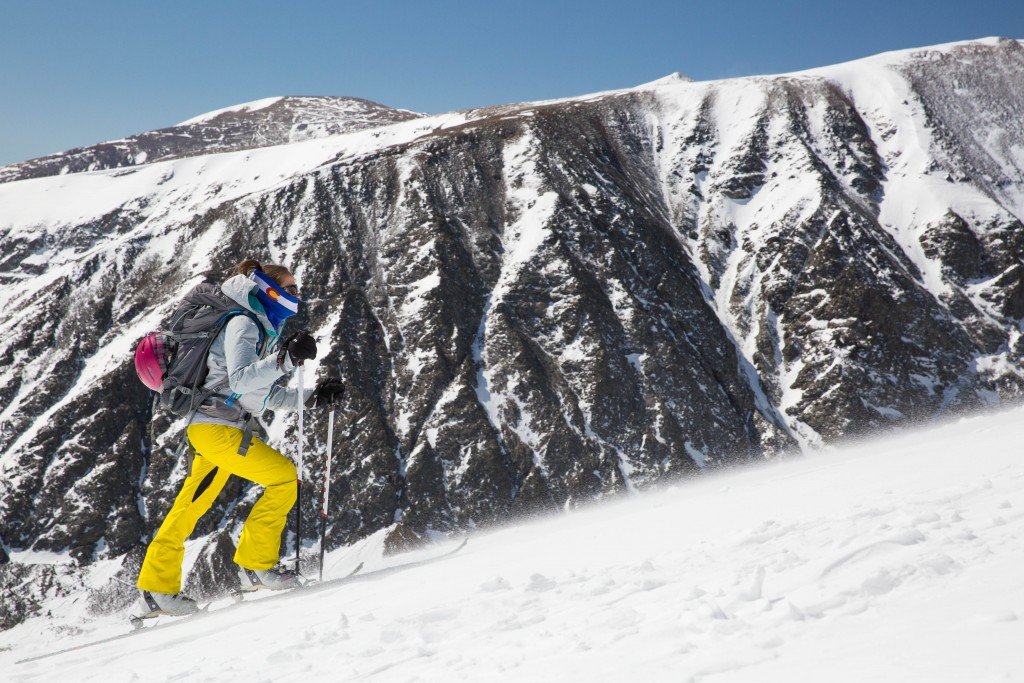 Am I doing this fashion thing correctly?

We continued climbing toward the ridge, battling the winds and hot sunshine. Truthfully, we couldn’t have asked for a better day in regards to weather. Sure, it was windy above treeline but it’s always windy up high! Storm clouds were nonexistent and we realized that we weren’t going to battle afternoon storms: we could hang out on the mountain all day if we wanted!

After a few hours of work, we reached a rock field on the saddle. I sat down on a rock to eat my lunch and reevaluate how I was feeling. And honestly? I hurt. My throat was burning from the heavy breathing and my head was pounding from my congested sinuses. I told Will that I was probably done for the day and he readily agreed. I felt bad for keeping him from the summit– especially when it was so close!–but knew my body didn’t have the last 1,000 feet of climbing. I was tapping out. 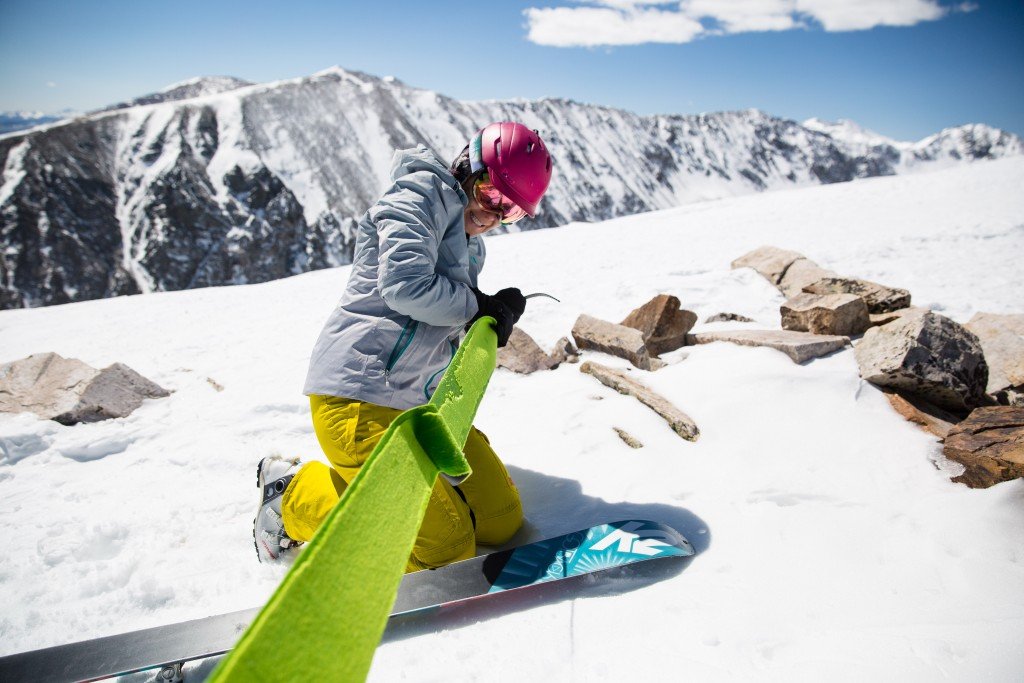 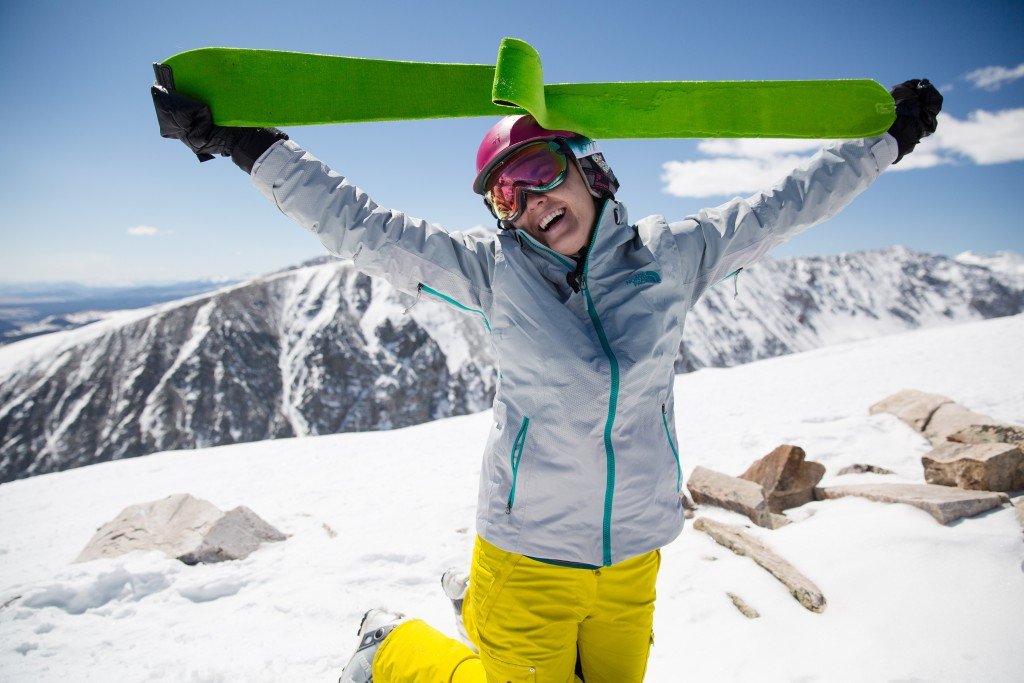 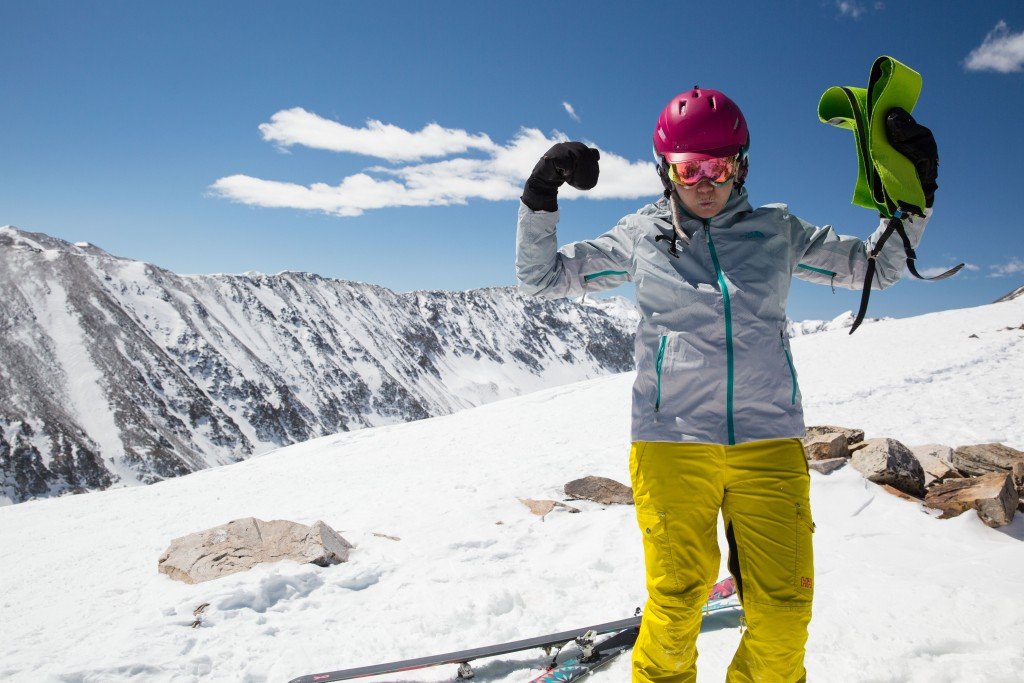 We finished our lunches, enjoyed a bit more sunshine, and ripped our skins off our skis. Although the snow was very stable, we double checked our avy beacons to ensure we weren’t being stupid while skiing the descent. And then, we were off!

There is always a moment of pure terror when I first transition into ski mode from touring mode. My body isn’t used to locking my heels into the ski bindings and I almost feel like a newborn horse, wobbling around on unstable legs. It never takes more than a minute or two, but I definitely had a moment of oh shit when I first started bombing down the ridgeline. In fact, I may have yelled at Will, telling him he couldn’t take any photos of me until I was sure I wasn’t going to eat it! 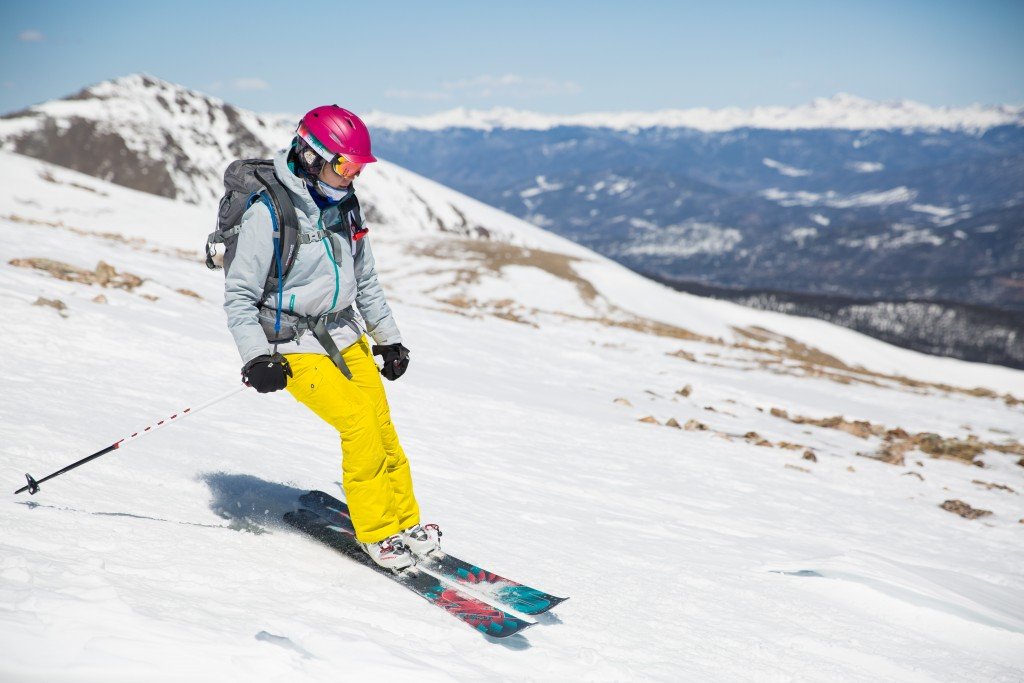 Trying to remember how to ski 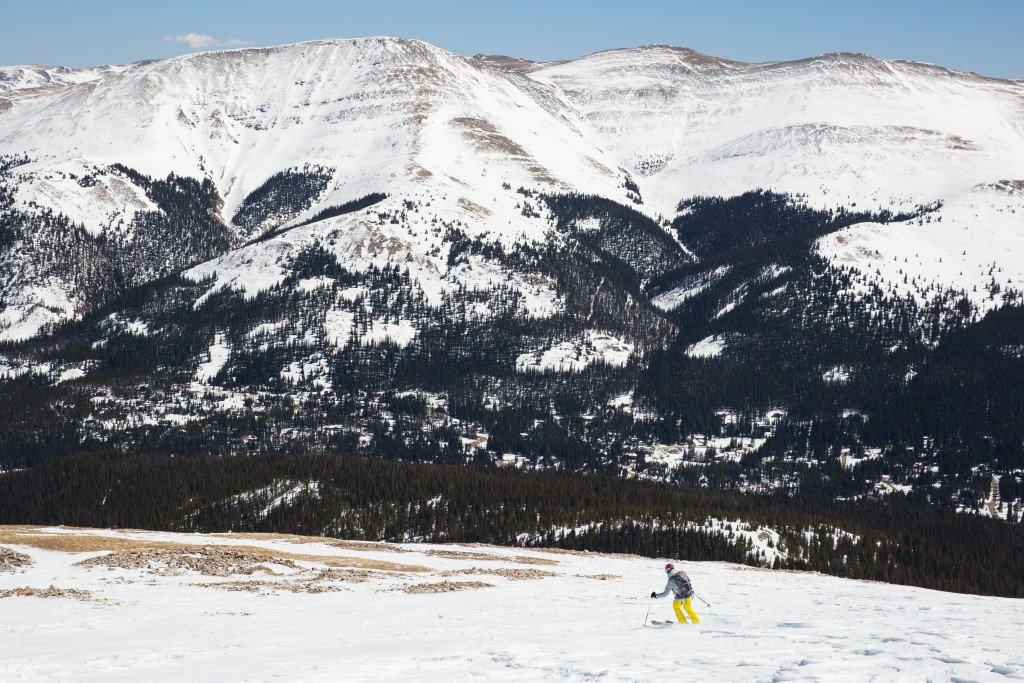 We descended a couple hundred feet before the sun started to soften up. We had ducked over a hill so the surface wasn’t windblown like it had been further up. Instead, it was perfectly soft; ideal spring skiing conditions!

The rest of the ride down was memorable: the snow was soft, the angle of the hillside was fun and fast, and the open bowl was essentially treeless. My ski tails were throwing snow everywhere and I remember laughing with joy as I zipped down the mountain. I don’t know if all 14ers are this fun to ski, but I sure hope so because it was an epic ride! 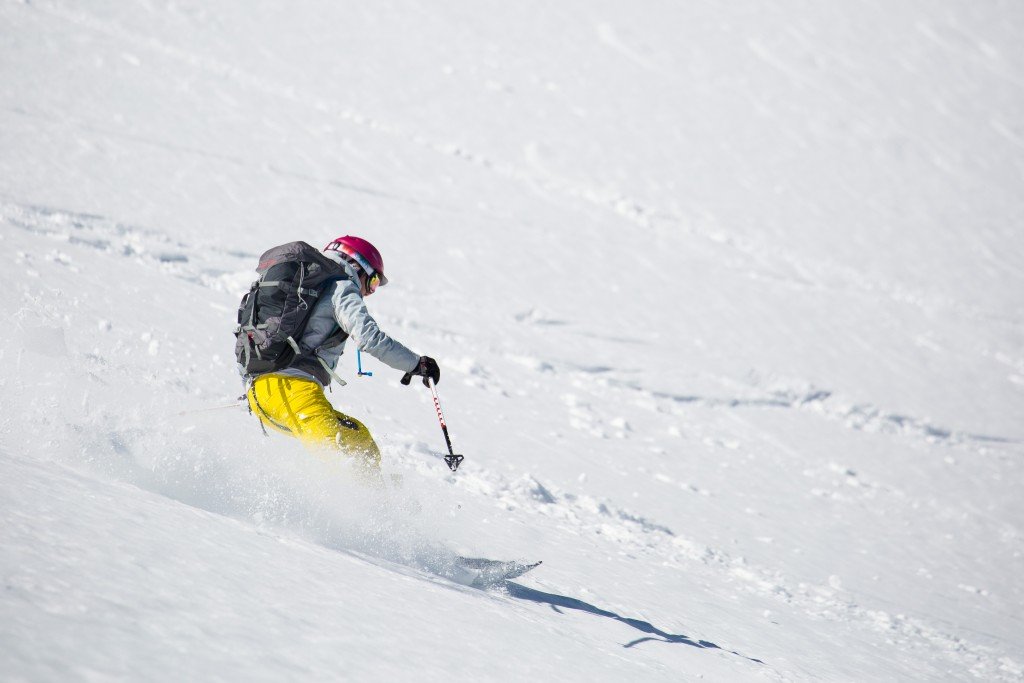 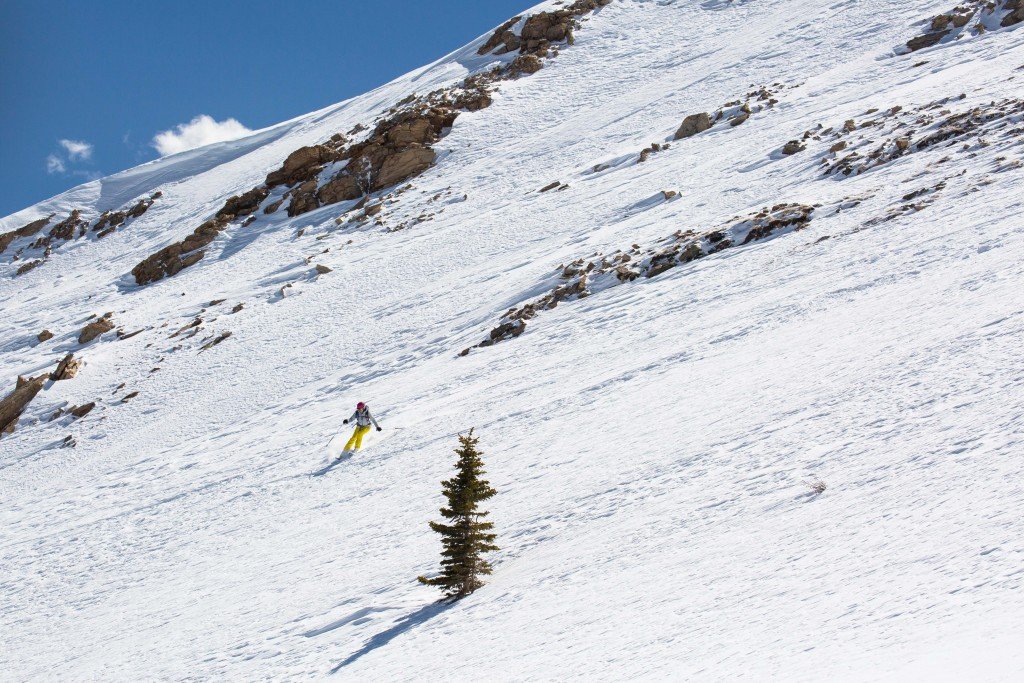 We eventually hit treeline where we slowed our speed to avoid crashing. The snow was too soft down below and it almost felt like we were skiing through wet cement. Fortunately, we only had another thousand feet of descent in the trees so we reached the parking lot without any issues. 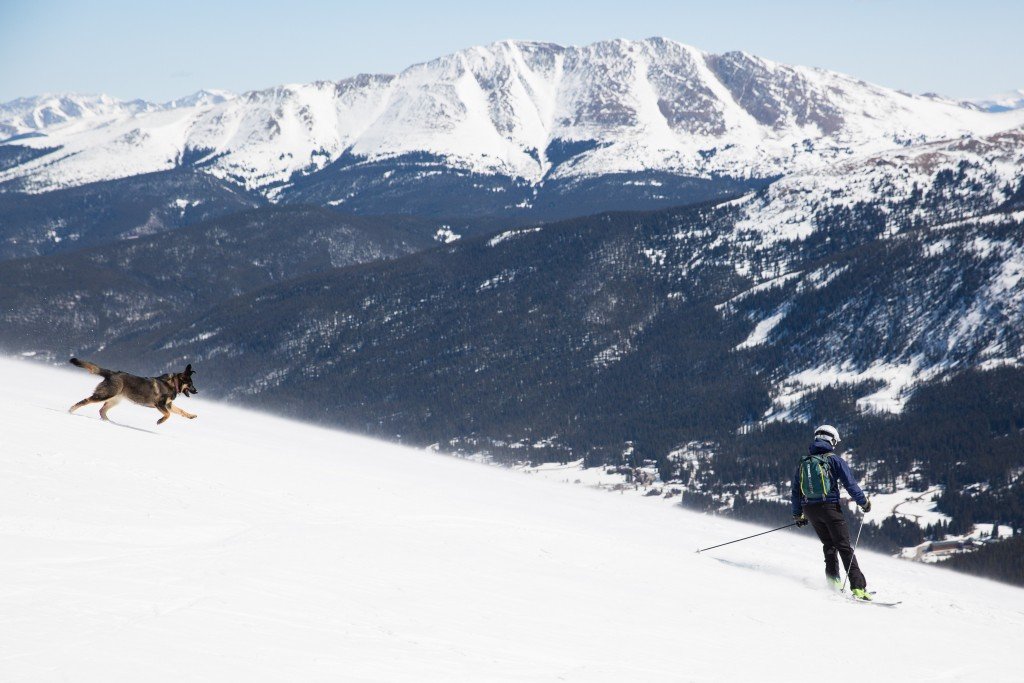 We can’t forget this guy who skied Quandary with his pup!

Y’all, this was a fun adventure! Sure, we didn’t summit but I don’t regret turning around where we did. In fact, our quick descent caused my ears to plug since my sinuses were such a mess. That combined with the drive down to the city wreaked havoc on my ears, and they remained painfully plugged for at least five hours. Not fun! However, I know we’ll be back for another ski day on Colorado’s 14ers– too much fun for a one and done.

As a quick reminder: never tackle any backcountry skiing without the proper safety precautions. Both Will and I have taken our Avy 1 courses, and we always travel with a beacon, probe and avalanche shovel. Additionally, we both carry Mammut ski packs with their Protective Airbag System. It’s fun out there but it can be dangerous!