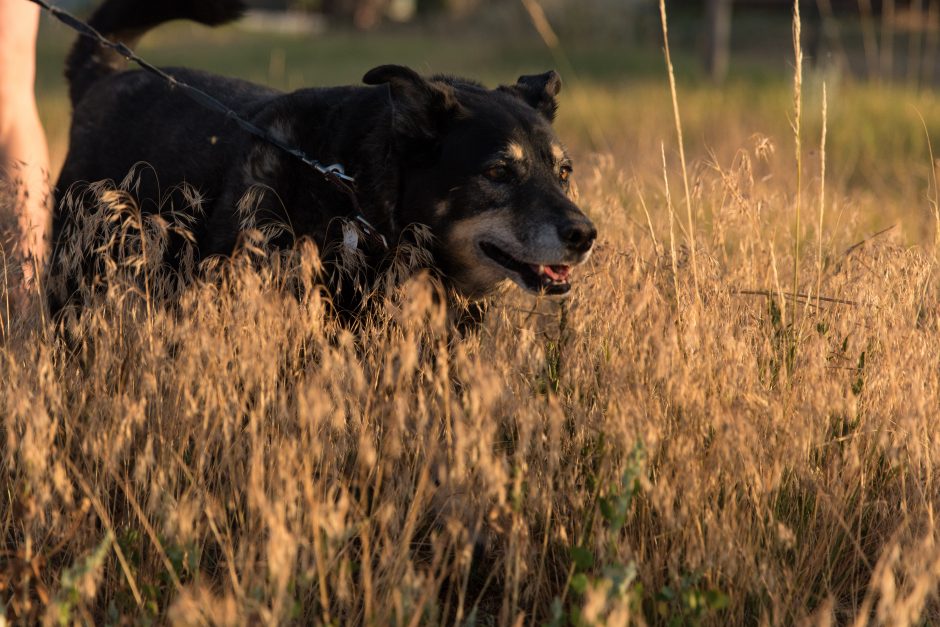 This post is sponsored by Wellness Pet Food. All thoughts and opinions are my own.

Let me tell you one thing about TPLO surgery: it is seriously no joke, and the first two weeks are the most brutal, Man, I’m glad we are through that window of time!

As I detailed last month, Tally tore her ACL and we went in for TPLO surgery on August 9. I was stressed beyond belief! Maybe it was the pregnancy hormones, but in reality, I was just freaked out that my baby girl had to endure such a tough surgery. Up until August, she had never dealt with anything worse than porcupine quills to her face! {Twice. Because apparently it takes two porcupines for my girl to learn her life lessons!}

Regardless, I was freaked out and had no idea what to expect from the recovery process. If you Google TPLO, you’ll see every horror story and graphic image possible…which did nothing for my peace of mind. That said, I’m writing this series in the hopes that others will glean a bit of hope from our story! 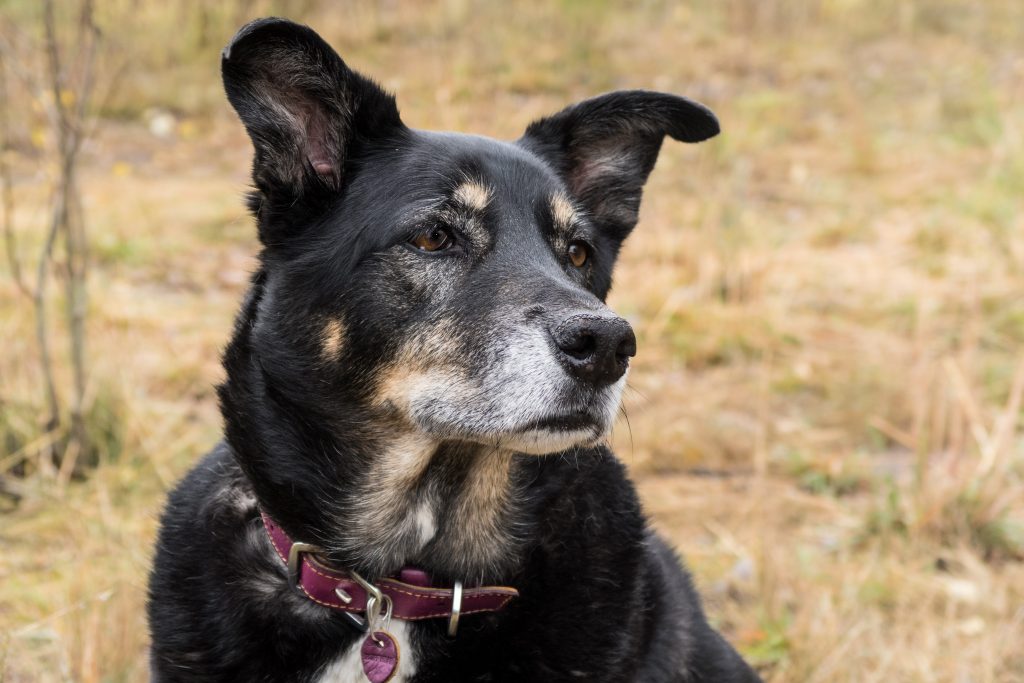 August 9 came far too quickly and the vet requested Tals show up at 7am, sans any food in her stomach. I asked Will if he could take her in because I knew she would be scared and I also knew that I wouldn’t be able to keep it together while dropping her off. Nobody needs a teary pregnant woman causing a scene in the lobby!

The drop-off went well, and Will left knowing that we would see her in 24 hours. As part of the procedure, the vet had told us that she would need to stay overnight for monitoring after the surgery. They wanted to make sure her pain was managed well and that everything went okay during that critical initial period.

I was beyond thrilled with the vet. They called me before the procedure to talk to me about her capabilities with anesthesia. I had concerns that she was too old {11 years} to be put under like this, so they knocked her out and monitored her for a little bit, just to make sure that she would handle it properly. Once they saw that she was coping just fine, they went in for the surgery. This involved a second phone call once they were inside her leg, confirming that her ACL was, in fact, torn {since this doesn’t show up on x-rays.} He also told me that her meniscus was torn and that they would clean that up while they were in there. He promised he would call a third time once they were out of surgery, and I really appreciated his attention to my concern since I was such a basket case.

True to his word, the vet called around lunch to tell me that the surgery had gone as well as expected and that she had handled everything well! There wasn’t much to update at that point but he told me they would monitor her for 24 hours and unless anything went wrong, I could pick her up the following day, as discussed.

Will and headed over the following day and swooped Baby Girl up in the early afternoon. I won’t lie; I almost started crying when I saw her! I was expecting a groggy, scared dog {she was so out of it after her teeth cleaning a few years ago that she literally ran into a pole as we exited the building} but I was psyched to see a happy, WALKING pup come around the corner! Where things got messy were when I clapped eyes on her leg. Sure, I knew it was an invasive procedure and that it would lead to a big-ass scar with lots of bruising, but I wasn’t quite prepared for her leg’s appearance. Truthfully, it looked like chopped liver! 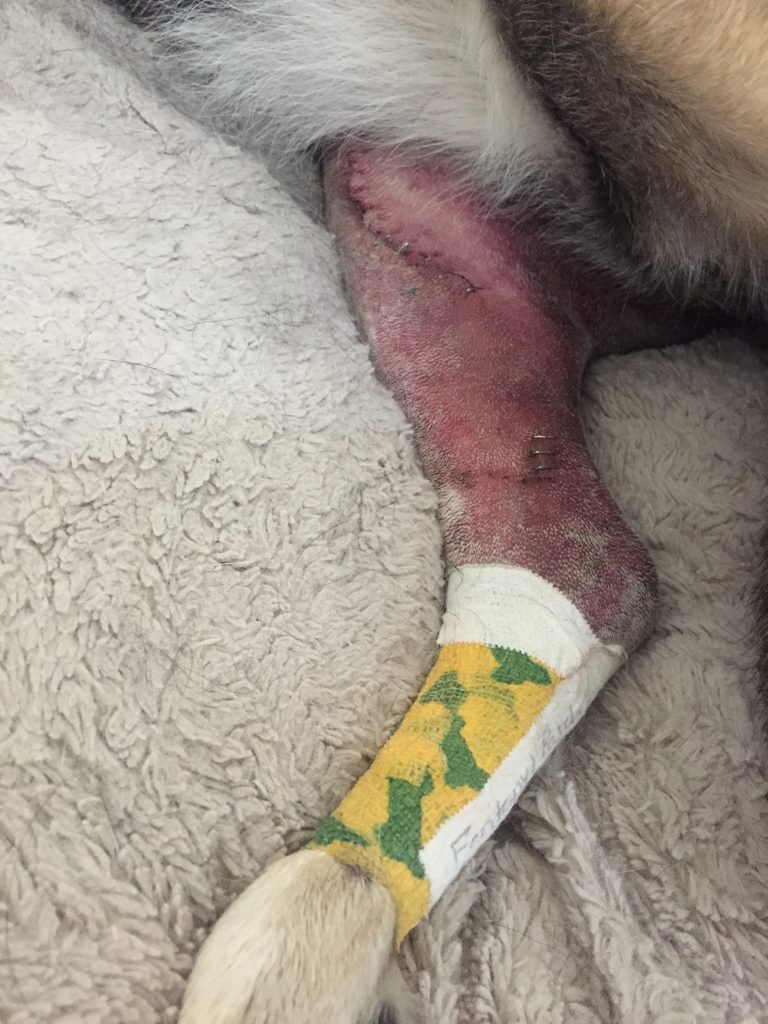 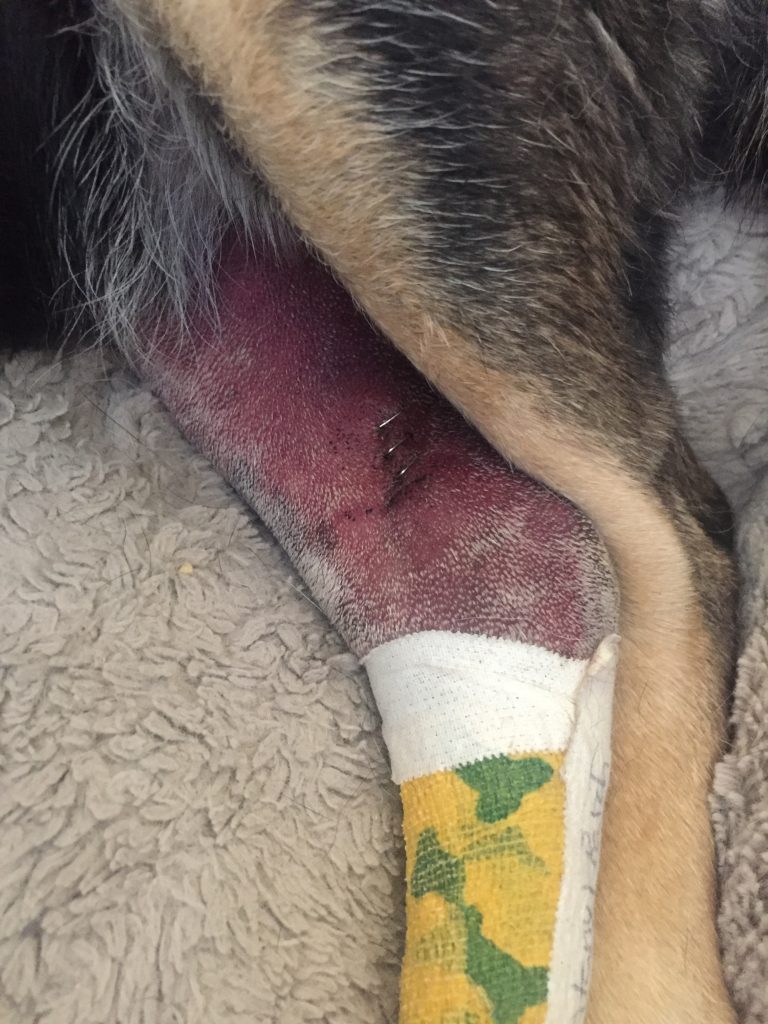 The vet took us back into a room with Tals to walk us through the rehab in the coming weeks. She had two big incisions on the inside of her back leg: a big one along the inside of her thigh and a smaller one inside her ankle. Surprisingly, she didn’t mind if I touched her leg although she was definitely aware of my actions.

In a nutshell, the first two weeks were stressful! Tals was on a cocktail of pain meds and antibiotics for two weeks, to be administered three times per day. This amounted to nine pills per day which was a lot. She also wore a Fentanyl patch for the first five days. As the vet described, Fentanyl is 100 times stronger than Morphine and the patch gradually administered pain relief to her throughout the first couple days. Once the vet saw that I was pregnant, he told me I wasn’t allowed to remove the patch; Will had to do it while wearing gloves. Strong stuff!

At the beginning, I could easily bribe Tals into taking her pills with tasty treats like peanut butter and cheese. But as the initial 14 days went by, she was so sick of pills that she was refusing to swallow them. She and I have such a good relationship that she will usually let me stick them in her throat and she will swallow them simply to make me happy, but that wasn’t the case this time. She started hiding them in her teeth where they wouldn’t dissolve but I couldn’t see them!

Around day 10, she completely rebelled. She would eat the pills with one food but then permanently associate medicine with that food, barring it from the future options list. We went through zillions of wet food options followed by rice, boiled chicken, cooked steak, chicken soup, and peanut butter sandwiches. Nothing worked! I even went so far as to cook her macaroni and cheese which worked for two meals before she nixed it from the list. 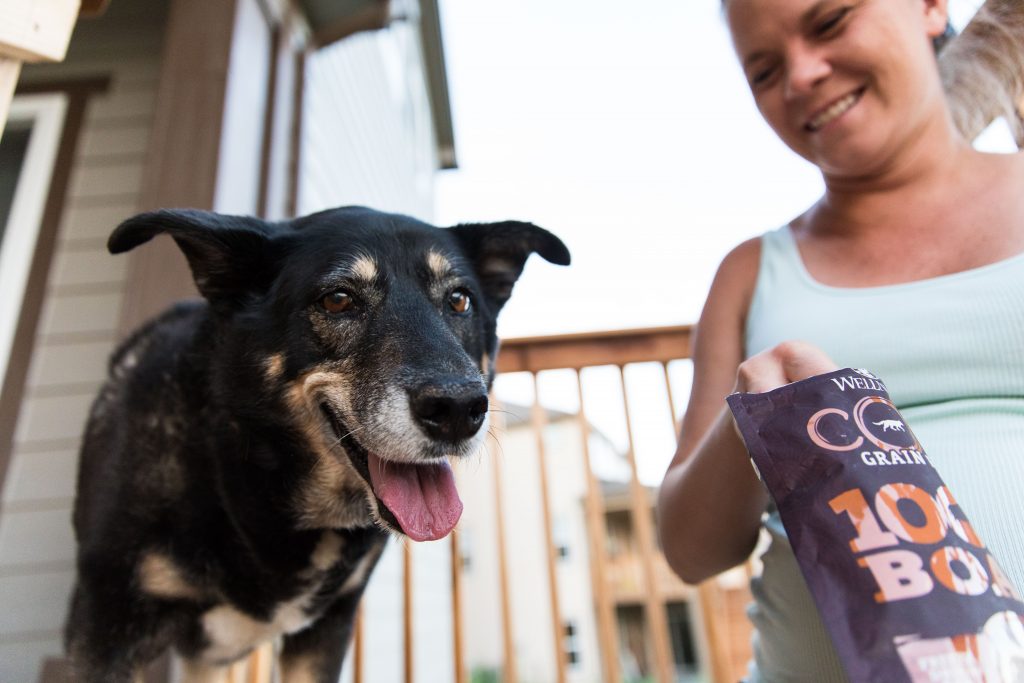 This is the face of a sassy dog who got to eat a lot of her favorite treats!

Dead serious, the only thing I could get Tals to eat were her Wellness Core 100% Freeze-Dried Boar treats {and yes, they had to be boar; she rejected the beef completely!} In the latter days, it got to the point where I was feeding them to her by the handful just so I could get calories into her stomach before the meds went down. Obviously, we went through our stash pretty quickly so I went to the store to buy more, only to realize they hadn’t hit shelves yet. In a panic, I emailed the PR lady for Wellness Pet Food, asking her where I could find more to purchase.

Guys, she overnighted us a massive BOX of the treats and I was beyond grateful! Not only did she send bags of Tally’s coveted treats, but they also packed up a cooling gel pad for Tals to lay on. She said her dog had been through the surgery as well, so she understood what we were dealing with. It was incredibly sweet and Will and I both appreciated the kindness. It was so stressful trying to find *something* for Tals to eat that I almost started crying at the generosity.

Yes, I cried a lot in August.

The other component of Tally’s recovery was the physical therapy. For the first two weeks, Tals was not allowed to walk any farther than our front yard to use the bathroom and then back inside. That’s it. No sudden movements, no unsupervised behavior, no stairs and no prancing around on slippery hardwood floors.

Our entire main floor is hardwood floors so I bought eleventy billion yoga mats to create a walkway to the front door. We penned her onto our rug in the living room so that she would have a bit of traction. In fact, this 20’x20′ rug is where the three of us slept the first ten nights! I slept on the couch while Will slept on a sleeping pad next to Tals with his arm across her body. 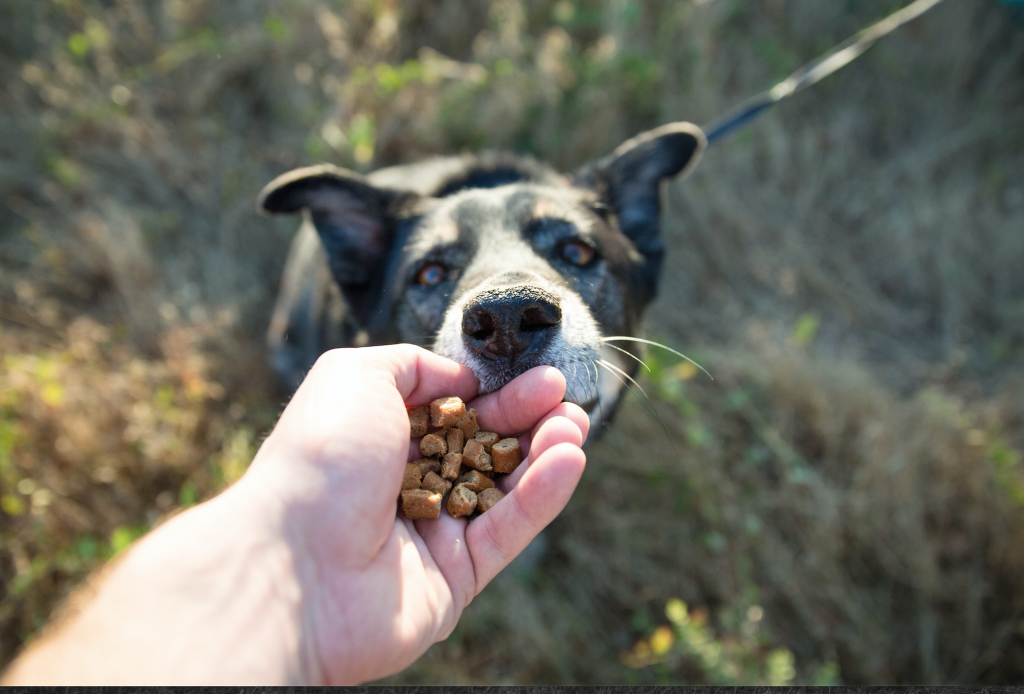 You see, Tals also had to wear the cone of shame for two weeks to keep her from tearing out her staples. She *hated* this thing so we wanted to be able to leave it off her at night so she could actually sleep. We had concerns she would start licking the incision while we slept, but knew she wouldn’t do that if she was monitored. By sleeping with her downstairs and on her level on the floor, we could keep an eye on her all night.

The things you do for your dog.

In addition to minimizing her movement, I had to regularly ice her leg for 10-15 minutes a pop for the first five days. After that time period, I had to alternate the ice with moist heat. For ice, I used frozen bags of peas. For heat, I would just microwave a wet rag and put it on her leg. I would go through this alternating process 3-5 times per day, using the ice after her bathroom breaks. Once I finished with the moist heat, I then had to do a ~10 minute doggy massage on her leg. The massage loosened up her leg enough so that I could then do passive range of motion exercises (PROM).

From what I gather, many dogs won’t allow their owners to do these movements but again, Tals has a lot of trust in her mama and let me move her leg around. I would do these PROM exercises at least three times per day, following them up with ice yet again. Basically, these movements involved bending and stretching her leg to make sure it didn’t tighten up from lack of movement. Tally was always very curious as to what I was doing but I know her well enough that I can read her facial patterns. I would always go very slowly with the movements and if something bothered her, I would immediately see it on her face and stop.

This ridiculously involved routine lasted for 14 days. At that point, we headed back to the vet for him to assess her progress. Everything looked good so her staples came out: no more cone of shame! 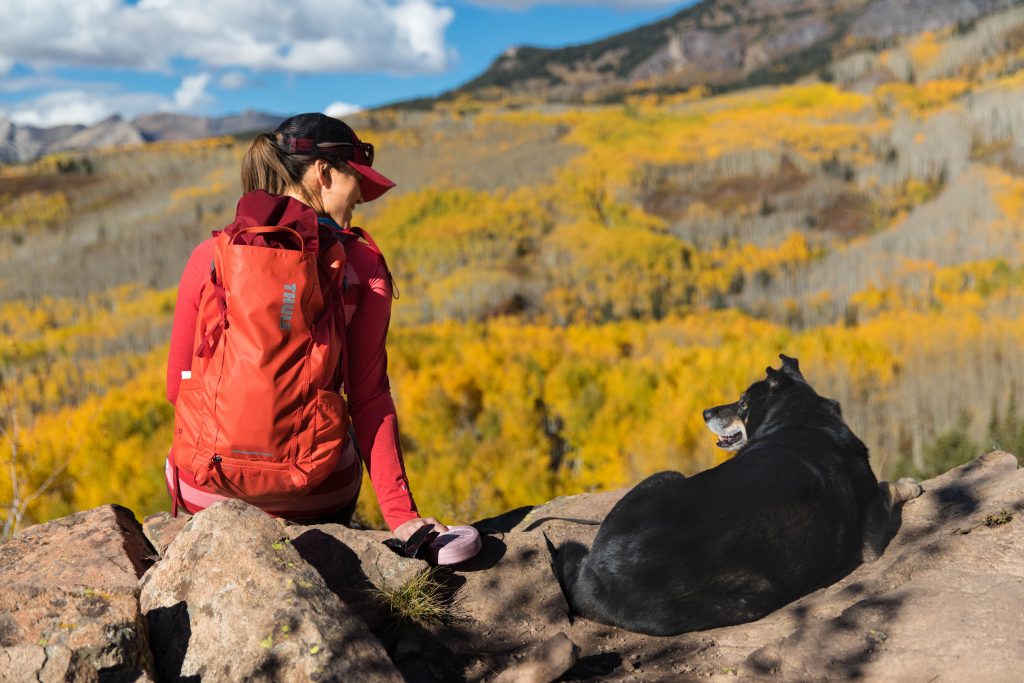 Can’t wait till we are back to this!

The first two weeks were the toughest part, but the recovery process is much longer–but that’s for another post. I do want to extend a huge thank you to the folks at Wellness Pet Food. It’s one thing to have a working relationship with a brand, but it’s entirely different when they go out of their way to let you {and your pup!} know that they are thinking of you. If Tals could speak, I’m pretty sure she would want to give them a big ol’ doggy thank you for the treats, too!

How to Become an Outdoor Writer: My Take