The Run from Hell

It occurred to me recently that the GTIS half marathon is only like 5-6 weeks away and while I have been running, I haven’t exactly been putting in any type of run resembling a long distance. So, I decided to mend that error by doing a nice 7 miler this weekend. I figured it would be a good distance to start with: not crazy long but good enough that it would push my mileage.

I got up and out the door by 7:30 on Saturday morning, feeling proud of myself and ready to put shoe to pavement. The first mile or two felt outstanding, but as the distance crept by, I realized that I was totally starting to suck. My pace was getting slower, my legs were getting heavier, and I became convinced that it was the hottest day of the year (yet the thermometers only reported 71 degrees. Odd!) I was able to mentally berate myself into running 4 miles away from my house, knowing that it would be an out-and-back. This way, I was sure to cover the necessary miles without bailing out halfway. Like that logic? 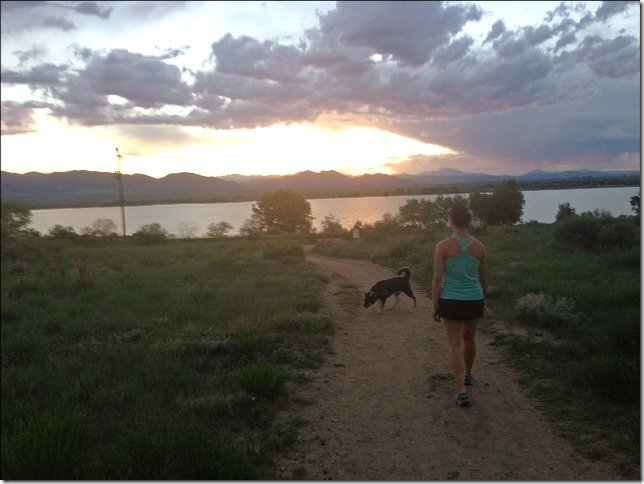 Not the same day, but this is where I was running

I turned around halfway and began my trudge home, contrary to what every fiber in my being was telling me. My legs felt like lead; then it felt like I didn’t have any legs at all. My breathing was bananas; then I was getting goosebumps despite the warmer temps. How could I be dehydrated after only 4 miles?! As all of these thoughts swirled through my brain, I continued to plod along, convinced that I would finish this god-awful run. At least the scenery was beautiful, right? I had chosen to run on the trails at the lake by my house, so the view was pretty astounding. Unfortunately, the combination of beauty plus my wacked out mind led me to make an error in directional judgment. Long story short? The trail forked, I headed right and I should have trotted my merry little legs to the left. Whoops!

This wasn’t a huge disaster of epic proportions by any stretch of the imagination. I knew exactly where I was and as the crow flies, it was only 1.5 miles back to my house. Unfortunately, crows tend to fly in a more direct line than the trail systems in the Denver metro area, so it wasn’t that easy for me! Additionally, I had run into the area directly abutting the dam on the lake. This part of the trail system is filled with steep inclines and descents, all of which are typically fun when I’m running on fresh legs and a positive attitude. However, at this point, I had neither and really just wanted to get home!

The second my Garmin flipped to the 7 mile marker, I quit running and started walking. I had absolutely nothing left in the tank and although I knew I needed to get home quickly, there was no chance I was running all of that extra distance! To make things worse, I started to stress because I had made plans to drop Tally off at my parents’ house so they could take her to the cabin for a week. I wasn’t wearing a watch, but I was pretty positive that I had just blown the timeline. Argh!

I power walked my way up and down the hills until I finally made it back to my neighborhood. I was cursing my way up the last (and largest!) hill when I saw my Pathfinder cruising down the road towards me—turns out, Will had been by and remembered that Tals was supposed to go with my parents. When he heard my phone ring and realized that I wasn’t at my house, he answered the phone and made arrangements to drop Tals off with my parents himself. My hero! Fortunately, he also saved my ass from doing any more hiking, and I thankfully jumped in the car. I was beyond thrilled to be finished with that debacle of a run!

When was your last terrible run or workout?

Capitol Peak To Ring In My Independence