Van Life: What It Looked Like Living in a Van 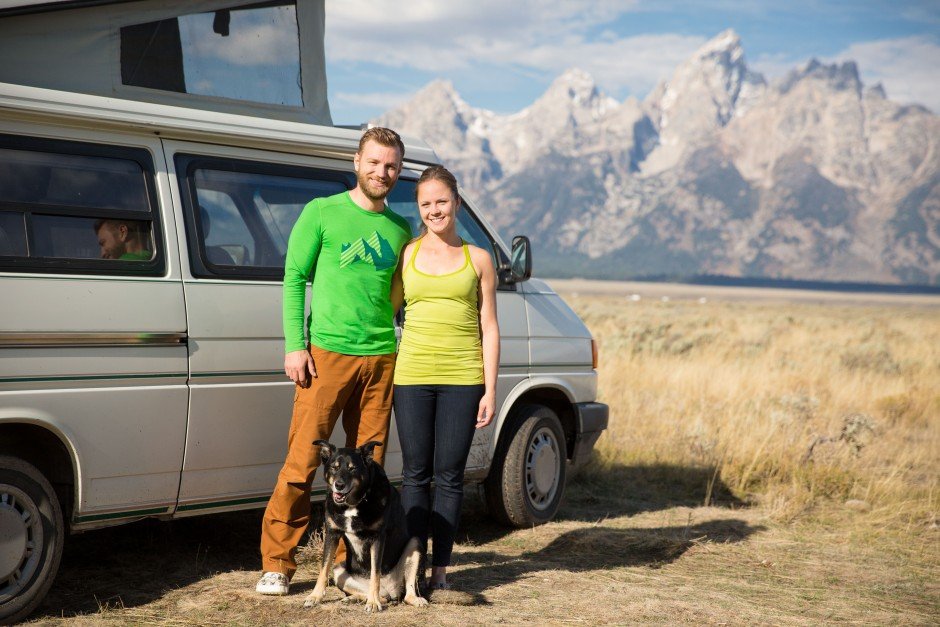 These days, van life is totally a thing. Living in a van is the new black in the outdoor world. Elsewhere? Not so much. I quickly realized this as we embarked on our honeymoon road trip and people were aghast. “What is van life? You’re living in a van?! As in, you’re sleeping and cooking in that thing?!”

{Side note: this reporter was so impressed by the idea that she wrote an entire article about our honeymoon!} 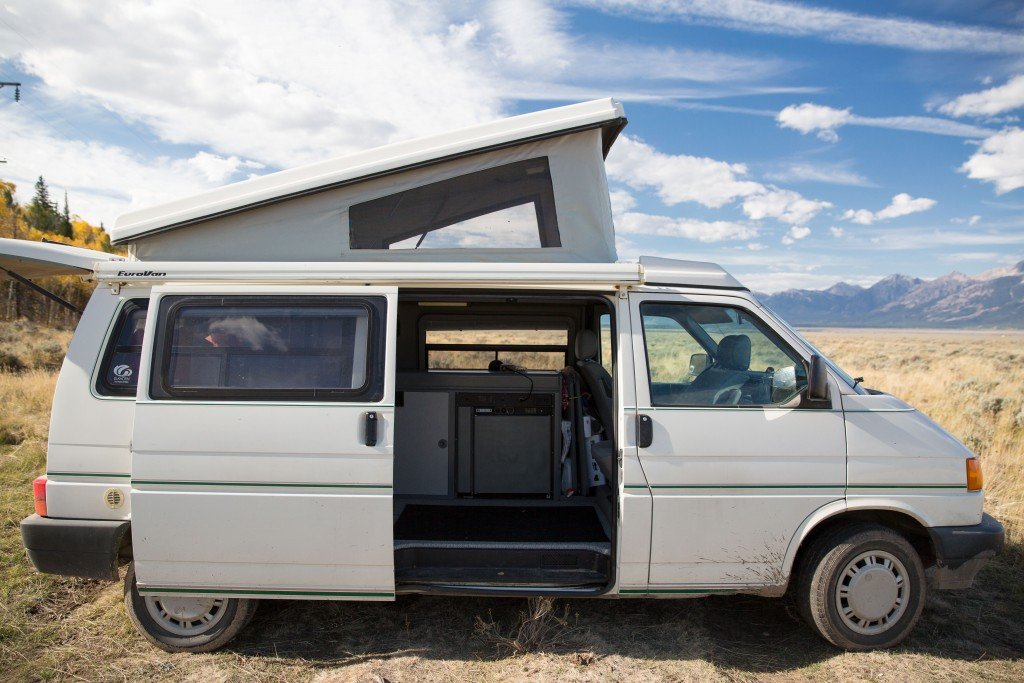 You see, in the outdoor world, everyone from climbers to mountaineers to aspiring athletes is switching over to tiny mobile living and quite a few are opting for van life. It’s not shocking in that small niche of people; rather, it’s the norm. And since this is the world that I largely live in, I was not expecting the range of questions that came along with our van life honeymoon! Of course, we only lived in our rented Eurovan– thanks Rocky Mountain Campervans!–for two weeks compared to others who do it year-round {like this gal who did it for a year!} That said, I’m willing to bet a few of YOU have questions about van living, so I thought I’d outline a normal, van-dwelling 24-hours on our honeymoon. 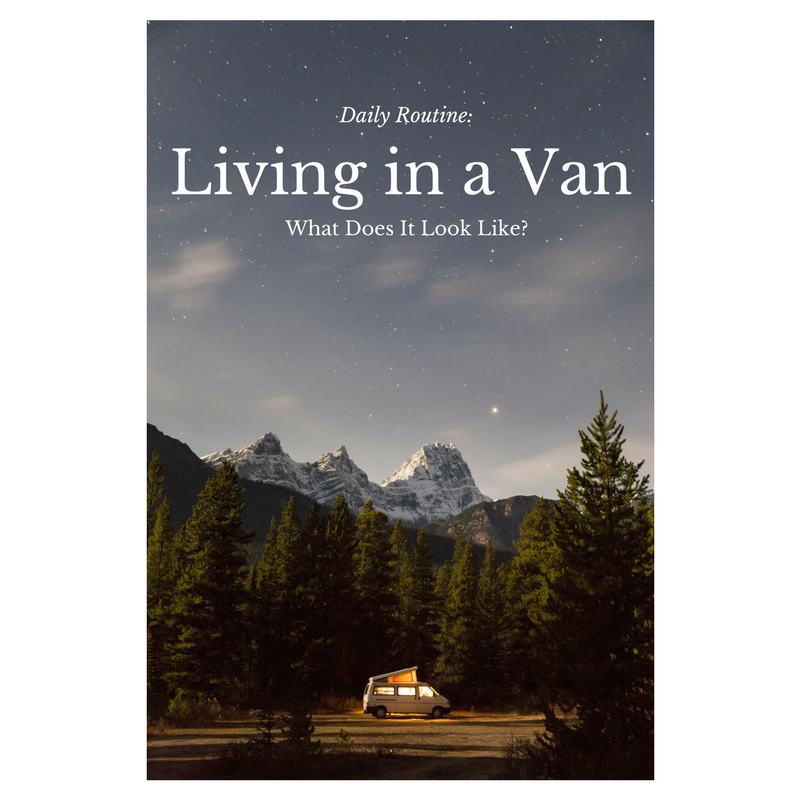 Save for our first morning of van life {where we slept at a rest area in Sheridan, Wyoming}, we were pretty lazy on our morning routines! We’d sleep in until at least 8am, enjoying the quiet of whatever trailhead we parked at. Without fail, Will would wake up first and hop out of bed to turn on the thermostat for me. 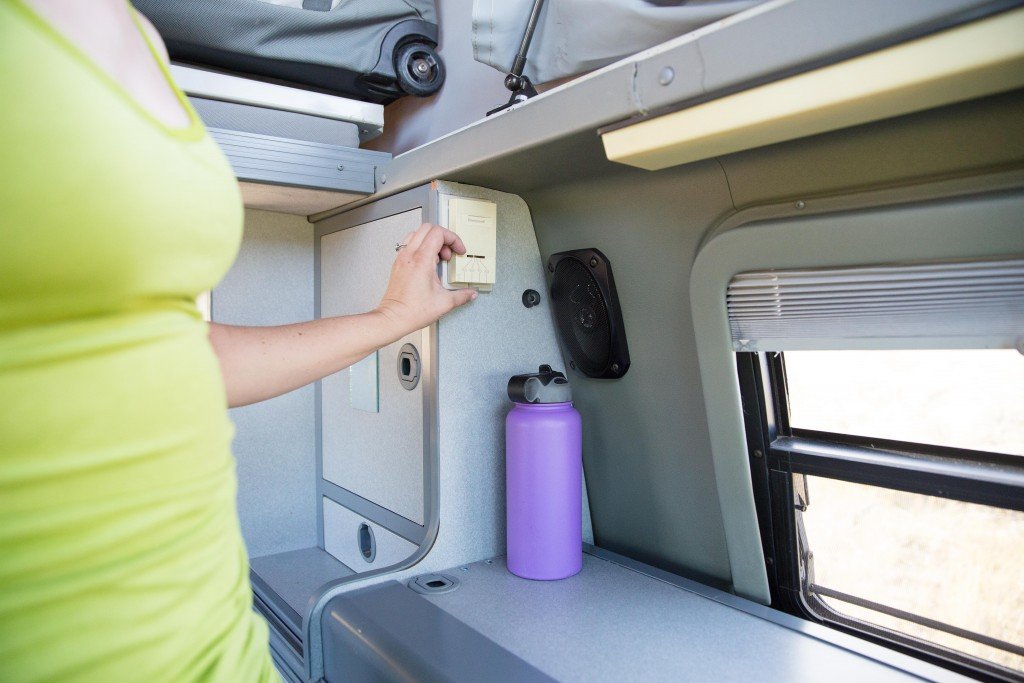 You see, our Eurovan had a separate heater/thermostat just like you have in your home. It was located on the wall by the counter so it was easily reachable from bed. It was hooked to the propane tank underneath the vehicle, so all we had to do was flip the switch and turn it to whatever warm temperature we wanted. I have terrible circulation and always battle feeling cold, so Will would crank it up for ten minutes before I got out of my sleeping bag. He is a keeper!

Once I stirred from my down-filled bag of gloriousness, we’d immediately put away the sleeping bags in the back closet. Then, we’d fold up our bed. You see, the back bench of the vehicle unfolded to our bed. And while we could cook breakfast and get ready with the bed down, it took up a lot of space. It was much easier to take the two minutes to fold it into the sitting position.

After that was sorted, we’d put up the blinds on the windows and take down the front curtain. Each window had built-in blinds for privacy while the windshield had a curtain that attached to the ceiling and hung down, blocking the front windows. This would give us 100% privacy at night which was awesome! 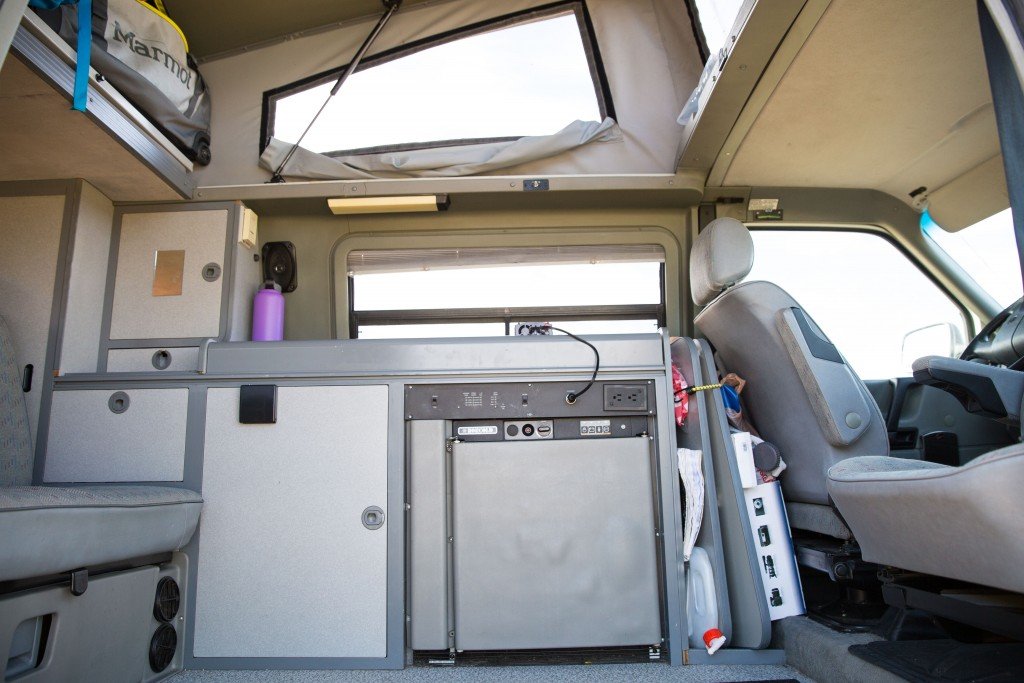 Next came breakfast! A long counter ran along the driver’s side wall of the van. However, when you lifted up the counter top, it would expose both the kitchen sink and the two-burner propane stove. We quickly discovered that it was easier for one person to move around while the other sat, so I took on cooking duties.

All the pots and pans were in a cupboard below the sink, and the two-burner stove worked amazingly well! After making coffee {naturally!}, I would whip up some scrambled eggs on one of the burners while warming tortillas on the other. Then, I’d pull our salsa out of the refrigerator below, and voila! Breakfast burritos. It was so nice to be “camping” but have fresh food!

Below the counter top were the level readings for the vehicle. Their was a switch to turn the water pump on and off, as well as a button that lit up the levels for the gray water, fresh water and propane. For our two week trip, we filled up our fresh water tank twice and emptied our gray water once. We also refilled our propane one time for $20 Canadian {or $15 American.} 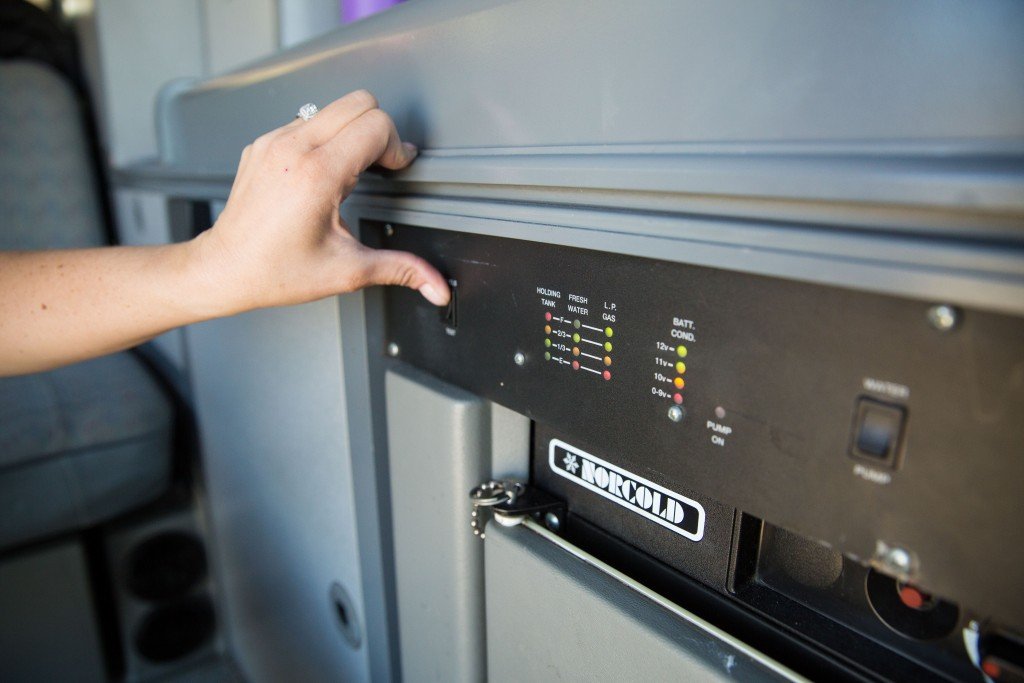 After breakfast, it was time to play! This was the trickiest part about van life but Will quickly got it down to a science. Since the Eurovan has a pop top {that is actually a second bed}, we would use the upper level for storage for our luggage at night. The pop top had to come down before we could drive anywhere, so we’d have to rearrange the luggage. Will liked to joke that he got a ten-minute workout every morning while slinging duffel bags, but that’s largely our fault. We brought WAY too much stuff!

Once the top was down and luggage stored, we’d turn the two front captain seats back around so they were facing front. Then, we were off for a day of hiking! 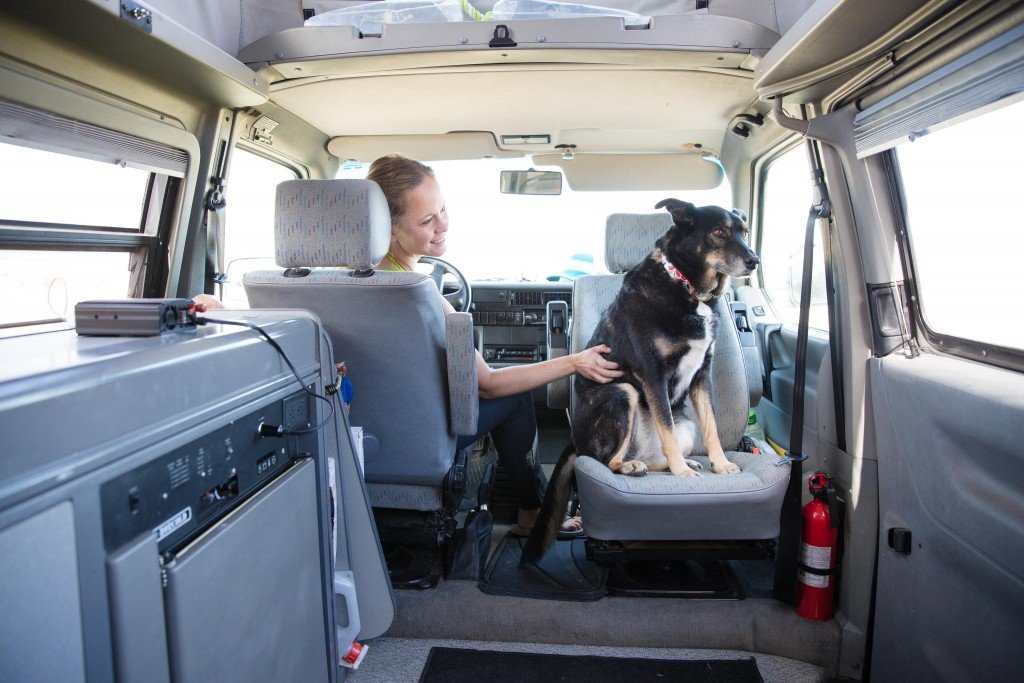 The middle of our days largely existed outside of our Eurovan. Sure, we would drive to trailheads or down scenic routes like the Icefields Parkway, but then Jerry {our van had a name!} would get left behind while we hiked. That said, we both LOVED how easy it was to get into the back while driving! 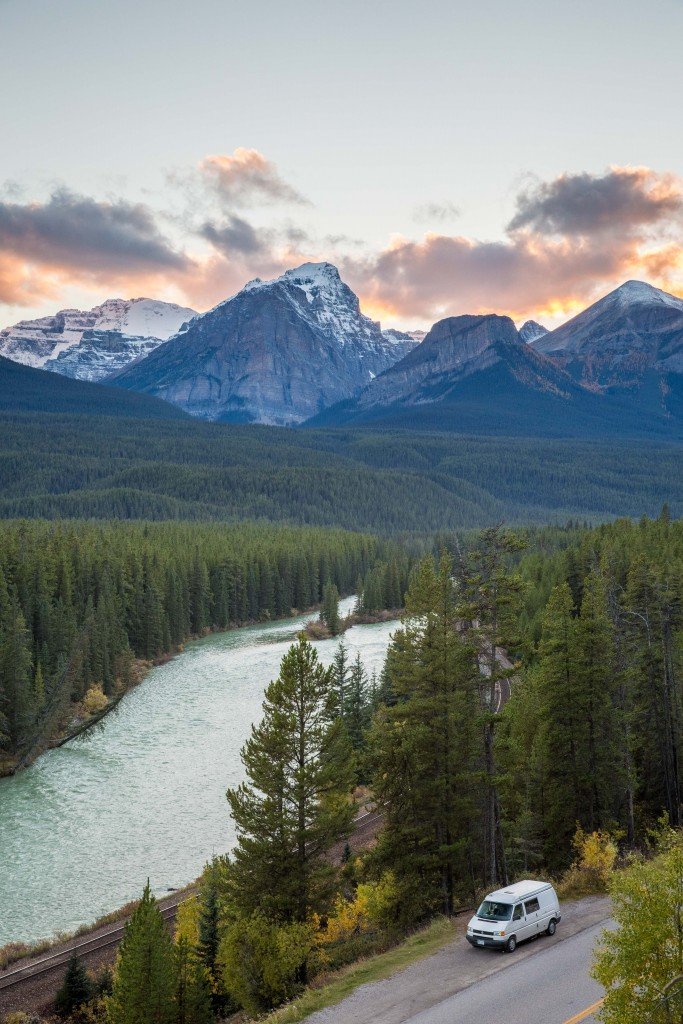 Will did all of the driving {save for three hours} so I would hop in the back and make sandwiches and whatnot on days when we were cranking out the miles. Since we both have Subarus at home, this freedom was a luxury.

Hands down, the best aspect of van life was the freedom! After hiking all day, we would always scout out a beautiful location for sunset photography. Since it would be dark afterwards {duh!}, we’d get back to Jerry in the dark. While most tourists had to get back to their hotels or campgrounds or whatever, we didn’t have to worry about that. Hungry? Not a problem– there was food in the fridge. Tired? No worries, just lay down in the back. Our home truly was with us at all times and it meant we could focus on fun rather than logistics. 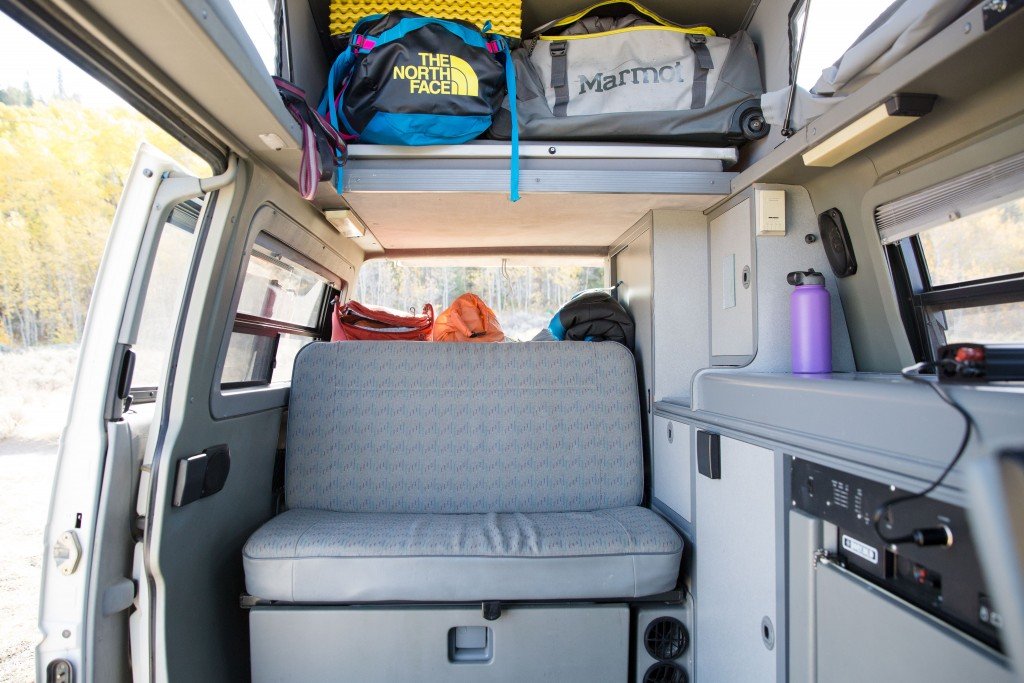 Once we’d return from our sunset viewing, we’d eyeball our hiking trail for the next morning. Then, we’d point the van directly at the trailhead and set up shop. Hands down, this was one of the best parts about van life! You see, cars are allowed to spend the night at trailheads since so many backpackers park cars there for multi-night trips. We were no different and it meant two things: we didn’t have to pay for a campground and we could get up and out the door in the morning with minimal driving. Awesome!

Once settled at a trailhead, we’d set up our home. I’d always swivel around the passenger seat in the front and stay put while Will did the luggage shuffle. He would pop the top on the Eurovan and place our largest duffels up there while I set up the curtains on the windows. At this point, it was always cold so we’d turn the heater on to roughly 70 degrees. Then, we’d cook dinner. Sometimes we’d make fresh food but more often than not, we ate stuff we were testing for various publications. A new favorite? Paleo Meals-To-Go! {If y’all haven’t heard of this backpacking food company, check it out. They supplied us with a whole bunch of flavors for the trip and they’re GOOD! The best part is their lack of processed ingredients, but we’ll chat about that in a later post. Try the Beef Stew or the Chicken Bean Chili!} We would occasionally set up the kitchen table that attached to the counter, but we’d often eat in our laps too. 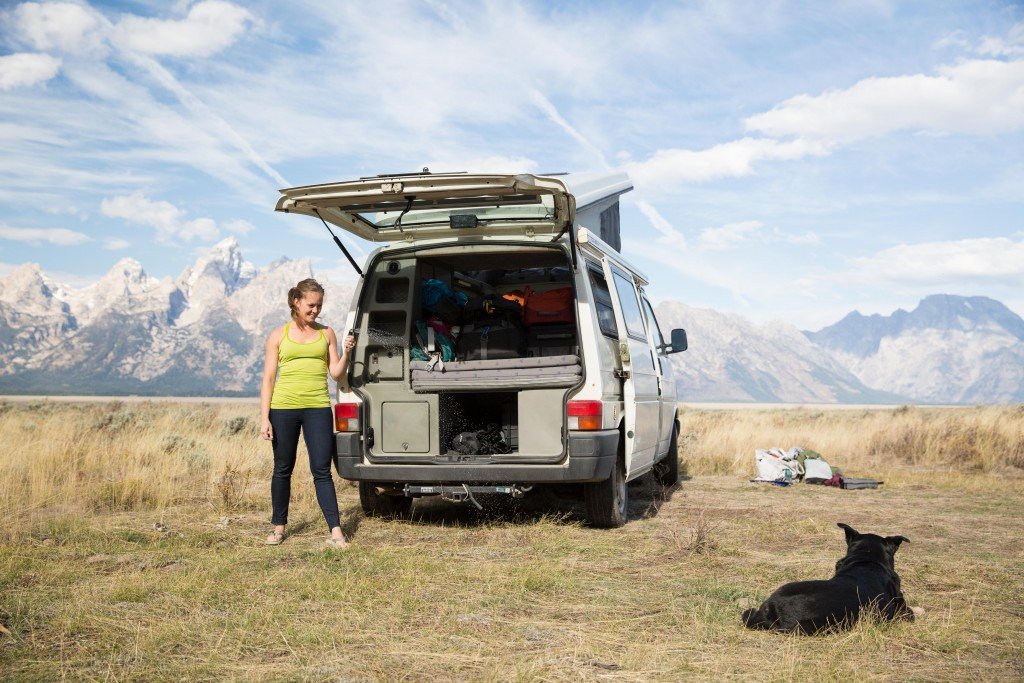 I always stored a bottle of wine to enjoy with dinner and cracking that open was the highlight of the meal. There is nothing like a glass of red wine while cozied up in a van next to your new husband. Tals even loved this part of the night since she had her favorite people within eyesight at all times! 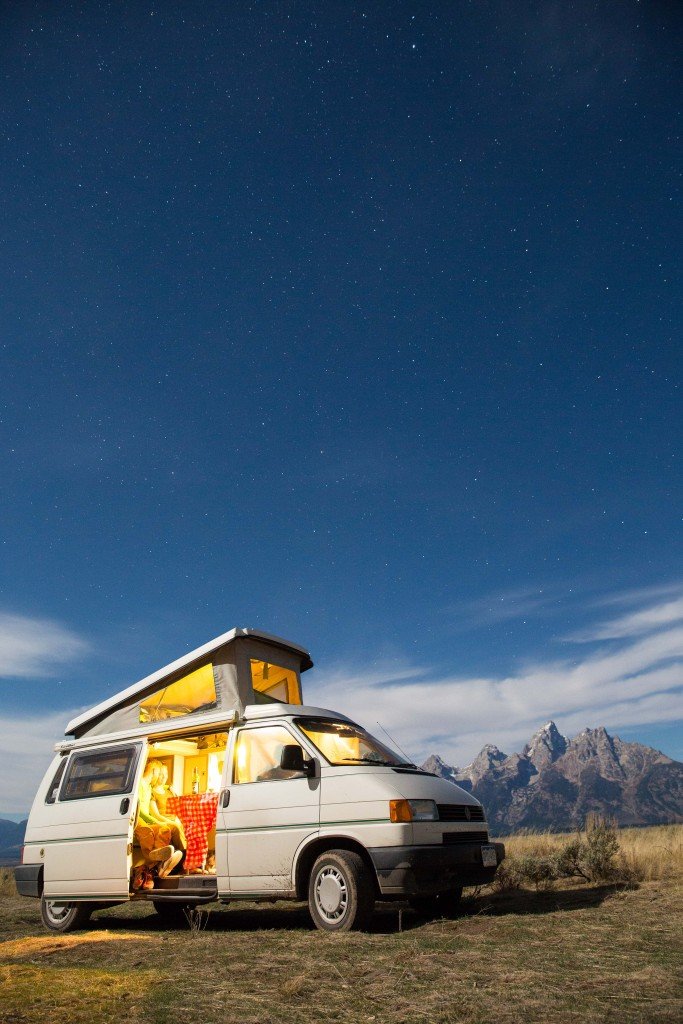 Date night in the van. I even set up the table with the festive tablecloth!

After dinner, we’d hang out and talk. And you know? We both consider those evening conversations to be the best part of the entire trip! When you are living in a van, there is no internet or TV or telephone or people to distract us. Instead, it was the two of us, newly married and talking about anything and everything. It was absolute perfection. We both happily remember our first night at the Lake O’Hara trailhead. It was puking snow outside in that wet and cold kind of way. We simply cozied up in the van, cranked the heat with a bottle of wine, and watched the storm fall around us. It was absolute perfection! 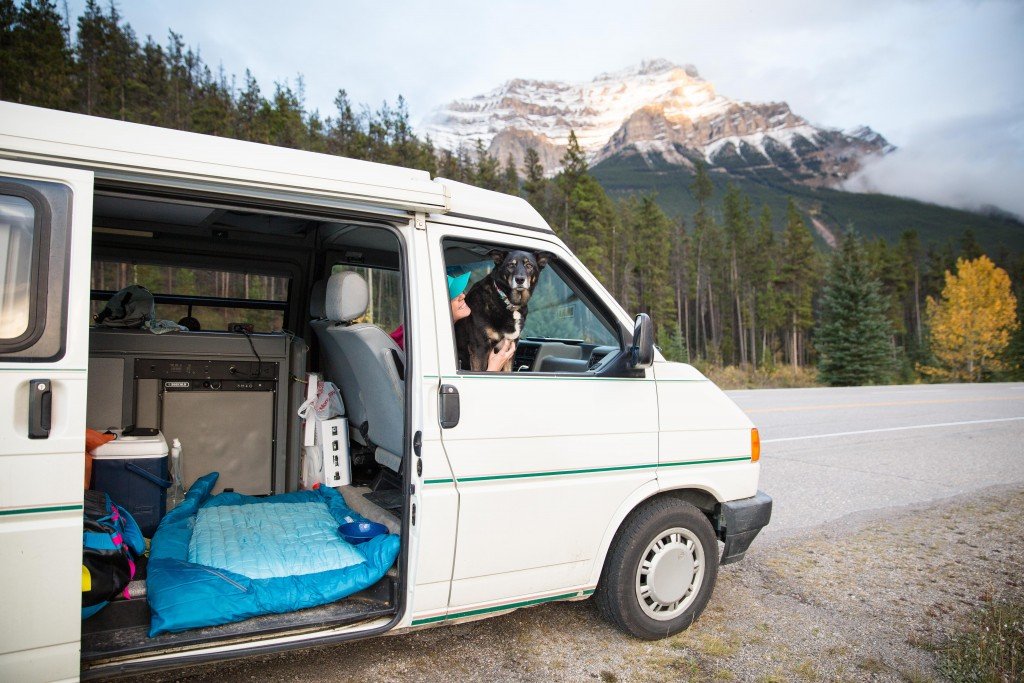 Before bed, we’d fold the bench back down and nestle in for the night. Of course, we had to set up Tally’s bed too since she didn’t exactly fit on ours {although she tried!} We had brought along a foam-celled sleeping pad that we folded in half for a double layer. Then, we put down her Kurgo Loft Wander Bed on top of the pad. More than expected, this bed became a critical part of our van life. It’s waterproof so we found ourselves leaving it on the floor during the day. Tals would run in and out with her muddy paws and rather than thrash the carpeting in the van, we’d let her get the mud on the bed. When it had dried, we’d easily wipe it off. Who knew a dog bed would be so useful?!

Does anyone have additional questions about living in a van?

Our Honeymoon Road Trip: By The Numbers

That Time I Ate the Snacks Before the Sponsored Post