Welcome to Alaska: Part One

I launched myself across Will in his window seat to smear my face up against the window. Our plane was beginning its descent into Anchorage, and although it was almost 10:30pm on Friday night, it was broad daylight outside our window. Guess that’s what happens when you head so far north! 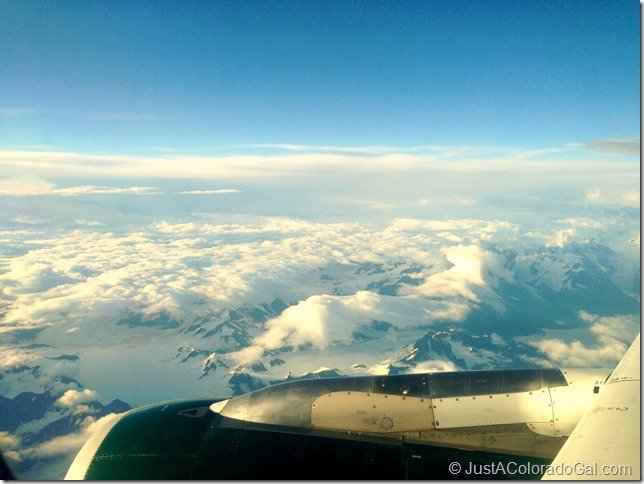 The five of us had coordinated our flights so we were all in the airport at the same time. After gathering up mounds of luggage, we met up with Drew’s sister who lives in Palmer. We had quickly realized no one would allow us to rent a car for the Dalton Highway,  so Drew’s sis had volunteered her (almost) brand new Jeep Patriot….and her home for the night!

The next 12 hours passed in a blur as we drove to Palmer, chatted with Drew’s sister, packed our bags, and prepared to leave in the morning. We wanted to get started bright and early on Saturday morning as we had a 14+ hour drive ahead of us!

The first 7-ish hours were uneventful as we drove through Denali, finally arriving in Fairbanks. Once in town, we swung by the home of Ed, the owner of Northern Alaska Packrafts. Ed and I had communicated via email to arrange the packraft rental so a part of me was pretty nervous that the rafts wouldn’t be there or that something would be wrong with them. Luckily, everything went smoothly and we had some pretty nice packrafts crammed into the back of the Patriot!

While in Fairbanks, we also hit up the grocery store for last minute food and snacks for the drive. I scurried around and grabbed a few last minute things (including coffee for the trip!), before setting out on the additional 7-8 hour drive on the Dalton. 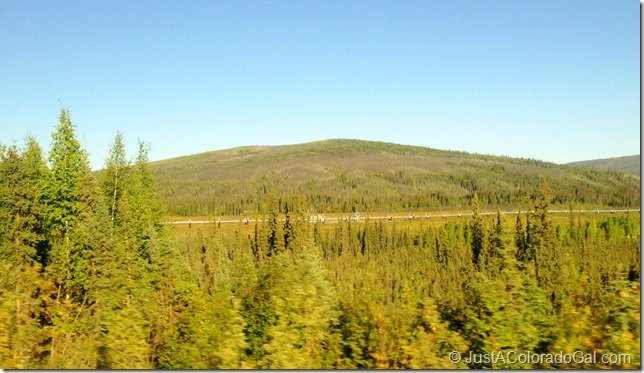 The Trans-Alaskan pipeline that runs along the Dalton Highway, all the way to Deadhorse

Y’all, I have something to tell you: the Dalton is not at all what it’s cracked up to be! From the trip reports and having seen Ice Road Truckers, we were all anticipating the worst with this road and dreading how long it would take us to arrive at the pickup site. Luckily, most of the road is paved now and it truly wasn’t that bad. Yes, the hills were insanely steep to descend and ascend and I imagine it’s a nightmare in the winter when it’s icy, but our largest problem was watching out for flying rocks against the windshield.

Once we realized we could cruise, we settled in for the long ride and just watched the miles tick by as the scenery changed. Naturally, we had to stop and take a photo when we reached this: 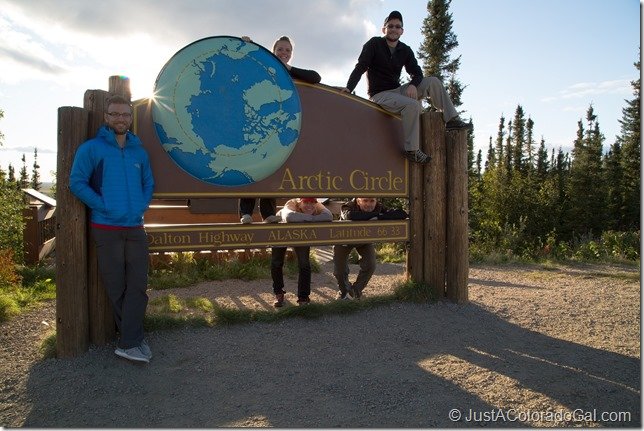 The crazy part was realizing that we were crossing the Arctic Circle and still heading north! After the sign, we still had a few hours of driving in front of us, and I think it was this realization that allowed me to process where in the world we were heading.

We finally located pump station 5, one of many oil stations located along the Trans-Alaskan pipeline that parallels the Dalton. We were told that this was our airstrip, so we set up shop at the pump station for the night. 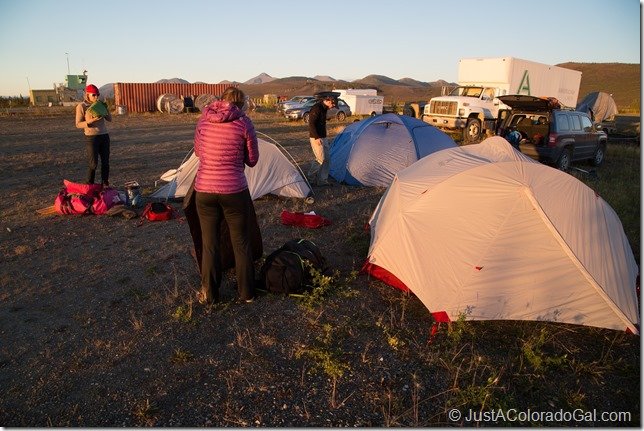 The morning dawned cold, crisp and bright, especially since the five of us hail from the lower 48 where it’s still summer. Darkness was a distant memory but that didn’t mean the temps weren’t chilly! Cold frost covered the top of our tents and we truly felt like we had arrived in the Arctic.

We eagerly warmed our hands and waited in anticipation for our bush plane to arrive. Our first plane of the day was to drop us in Bettles where we would arrange our float plane that would take us into the park. When I finally saw the tiny plane approaching along the horizon, I started to get wicked excited. It was time for the adventure!

To be continued tomorrow!

When was the last time something was totally talked up and turned out to be unlike your expectations (ahem, THE DALTON!)?

Heading into Gates of the Arctic National Park