Way back in September, Will and I busted out our calendars and penciled in a backpacking trip for the weekend of October 19-20. We saw that our weekends were filling up fast and we wanted to grab one last trip before the snow really began to fly! Coincidentally, my friend Ryan came to town that same weekend, so the three of us plus another friend decided to make a weekend out of it.

We debated locations but I finally chose the Willow Lake trail in the Sangre de Cristo range. I love the Sangres since they are so remote and rugged and have very few people—plus, Will had never been there! They are located in the southern part of Colorado so we all piled into our car after Friday’s work day and set out on the four hour journey. 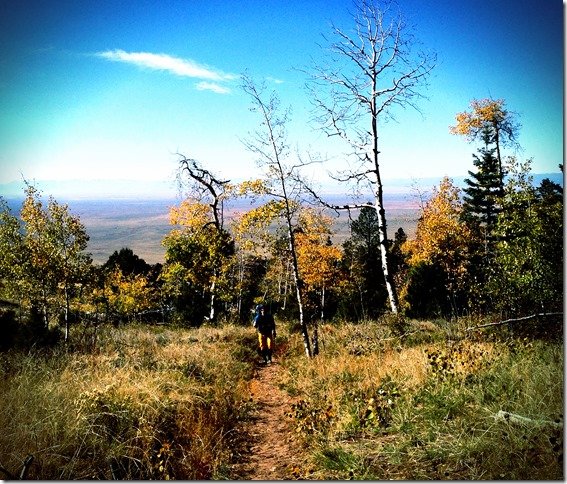 After arriving at the trailhead around midnight, we literally threw our tents in the parking lot and crashed for the night. We knew that we didn’t have to worry about an early start, so we snoozed off and on throughout the morning….or until Tally got antsy, began stomping around our tent, and popped Will’s sleeping pad!

Y’all, this may not seem like a huge deal but it kinda was! Obviously, he hadn’t brought an extra pad with him and we knew that we would likely be camping in snow. Sleeping pads make the nights more comfy, but more importantly, they keep your body off the ground so that you are protected from the cold. I was super concerned that Will would freeze once we reached camp, but he assured me it would be fine since he had a repair kit with him. Freaking Tals and her Velociraptor claws! 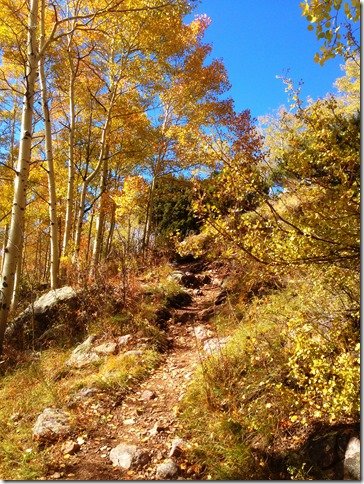 It was a true autumn at lower altitudes!

Out of the gates, the trail began a gradually climb up and over the first ridge. According to trip reports, we were looking at anywhere from 7-9 miles round trip, which really isn’t a lot. However, it turns out that there was TONS of elevation gain, so while the mileage was low, the altitude gained was high! 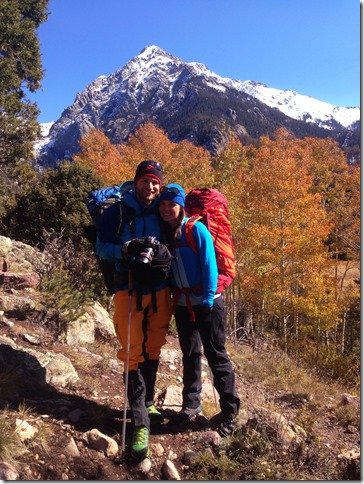 Not too shabby huh? Even though this was barely a mile in, I was tempted to camp in that meadow!

After cresting the first baby ridge, we popped out of the snowy shadows and got a glimpse of the beautiful peaks ahead of us. 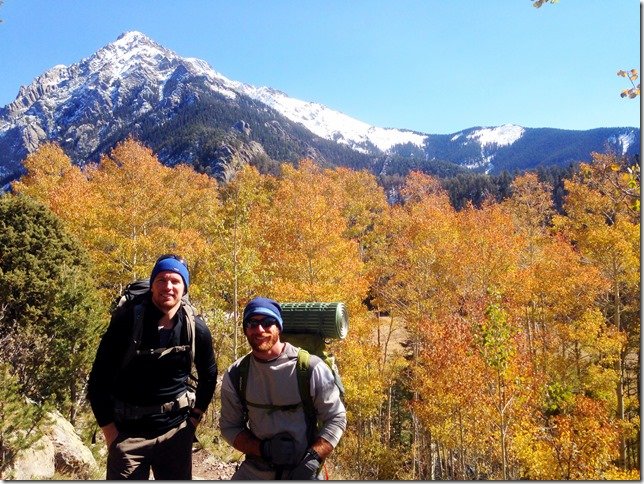 Eventually, we split into two groups with Peter and Ryan up ahead and Will and I poking along slowly. Will and I both have the same mentality when backpacking and we really like to look around and enjoy the scenery. Plus, Will is always stopping to snap photos so I swear we spend more time snapping shots than we do actually hiking. Regardless, the intense climbs didn’t seem bad to me at all because we were going so slow! 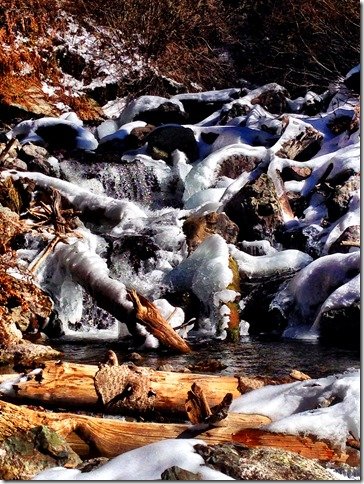 We crossed a few ice-cold rivers, stopped for a brief lunch break, and finally hit that point on the trail where summer/fall was left behind and winter was ahead of us. Literally, as soon as we crossed the stream, the trail switched to snow and it remained wintry for the rest of the hike. 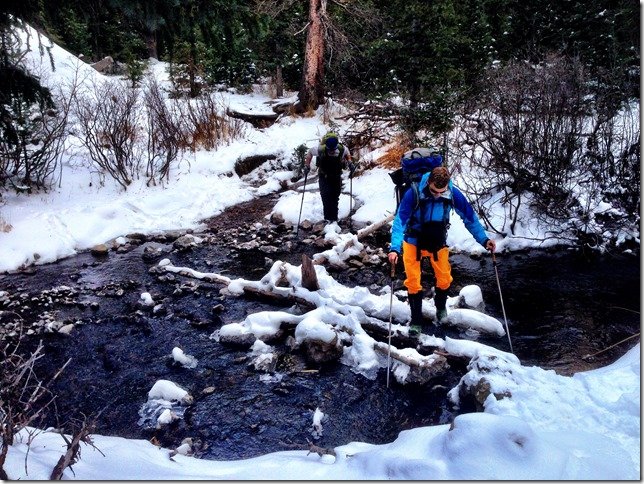 Willow Lake is situated at 11,700 feet and I think the last 1000 feet of gain was in the snow. Luckily, a pair of day hikers and the boys were ahead of us, so we didn’t have to break the trail. Will had been smart enough to put on his gaiters at the base, but I had decided that my Patagonia Gore-Tex pants would be enough. Luckily, they were but I definitely had to tread cautiously so that snow wouldn’t fill my boots. 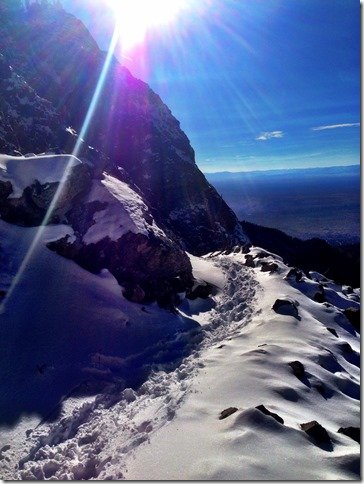 We reached the final ridge around 4pm and I knew we were in for a cold night. Once we plateaued over the ridge, we dropped into the shadows of the surrounding peaks and remained there for the evening. I was a bit worried since it has been years since I have gone winter camping! I used to go in college but I always froze my ass off, and I vowed to never do it again. Will has been gradually convincing me to give it another shot now that I have better gear, but I hadn’t quite planned on my reintroduction happening this soon. Sure, I had brought enough clothes, but we were looking at single digits temps overnight with tons of snow and ice on the ground. I was totally panicked that I would freeze! 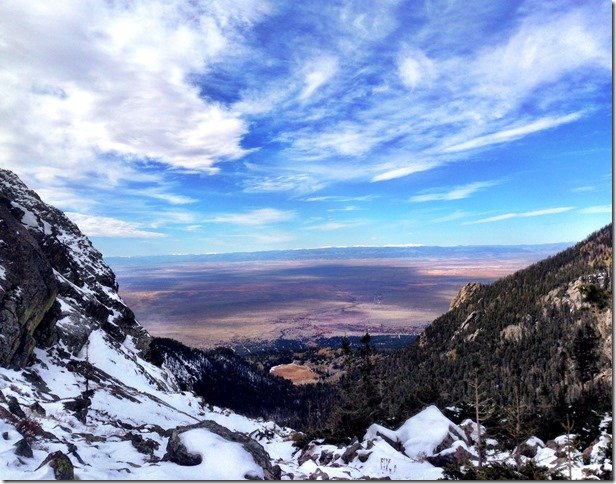 See that meadow way below? That’s the meadow that I originally thought of camping in!

However, whining and worrying doesn’t do much good, so I shut my mouth and finished hiking the 4.6 miles to Willow Lake. Ryan and Peter had already set up a campsite by tromping down the snow, so Will and I were able to quickly set up our tent before the sun dropped behind the mountains. I had originally chosen Willow Lake for the beautiful, 150-foot waterfall, but because of early winter’s arrival, the entire lake and waterfall were already frozen. Regardless, the campsite was absolutely stunning and I took dozens of photos (after putting on every single layer I brought!)

Per usual, a debate over campfires popped up when Will and I broke the bad news to the boys that we couldn’t have one. They had chosen a campsite that was pretty close to the lake, so we knew that we couldn’t really have a fire. And you know what? It sure sucks telling people that when you know that you are all chilly! Granted, we could have moved our campsite farther away from the water and had our fire, but that sounded like a lot of work. In the end, we sucked it up, piled on the clothing, and hung out in our tents in our sleeping bags. 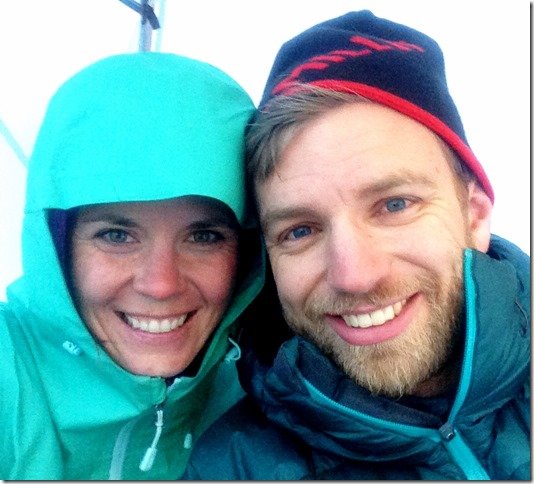 You’d think we were outside because of what we’re wearing…but you’d be wrong. This is in the tent, in our sleeping bags!

Unfortunately, we had one more snag to cap off the evening. Remember how Tally had popped Will’s sleeping pad? We hadn’t read the instructions on the repair kit, but turns out, the glue needed to set for 8 hours before inflating the pad. Obviously, we didn’t have that much time so we tried to repair it with an hour-long wait time while we cooked dinner. No dice. The patch promptly popped off the inch-long tear and Will’s sleeping pad deflated immediately. I felt so bad since it was my crazy pup who had shredded his bed, so I kept trying to give him my pad. Always the gentleman, Will refused to take my mat and insisted on sleeping on the cold, snowy, frozen ground all night. Y’all, I felt terrible! I scooted to the side as far as I could and was able to make enough room so that his hip bone could rest on the pad, which he said helped….but I know he was miserable! 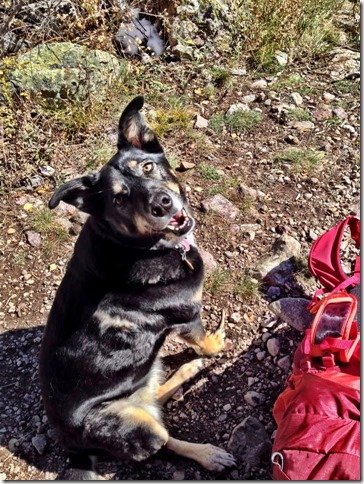 The culprit (Photo credit goes to Ryan for snapping this elusive photo of the sleeping pad-popping ninja!)

The one downside to winter camping is that you have a tendency to climb into your tent early and spend a lot of time in your sleeping bag…and we did just that. Our two tents were close together though, so we were able to chat through the walls, almost like shouting into the next room at home! After a couple hours of chatting, we all dozed off with one of the earliest bedtimes I’ve had in awhile. 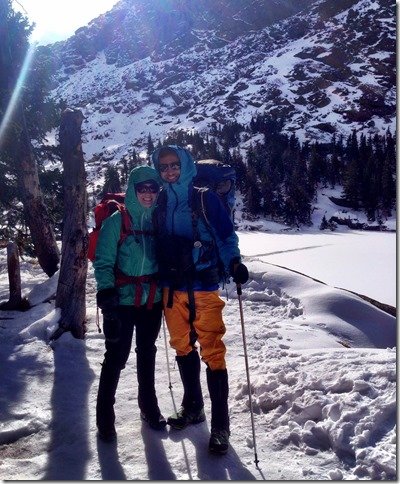 Dressed for the early morning temps

I slept amazing and my Mountain Hardwear Phantasia 15 bag did a spectacular job of keeping me warm. I wasn’t even the slightest bit chilly all night which made me feel awful since I knew Will had suffered. Regardless, dawn broke the following morning and we waited for the sun to hit our tents before packing up and headed back down the mountain. Ryan had flown in from Nashville so I think the cold was a bit of a shock to him: our temps had hit ~5 degrees during the night.

Overall stats for the trip:

Elevation Gain: 3,232 feet of elevation gain on the way in (so over 4.6 miles). Yup, it was a lot of climbing, but coming out was pretty easy!

The first 2.3 miles of the hike

The last half, or the final 2.3 miles

Y’all, this was one of my all-time favorite backpacking trips of this season! We caught some late fall color at the lower elevations, some stunningly white snow up above, and were treated with bluebird skies throughout the entire weekend. Absolutely perfect. Even better? We found an amazing little pizza place in Crestone called Bliss Café. After returning to the trailhead, we were able to cap off the weekend with pizza and beers. FOR THE FREAKING WIN!

Have you ever been winter camping? Would you go?

This wasn’t true winter camping—more like a pre-season attempt—but it’s renewed my faith that I can handle colder temps!