Our Winter Adventure: The Grand Tetons

{But not for long}

I finally cracked open my Live Writer to get this post going and it feels…awkward. It’s been quite awhile since I’ve blogged regularly and it almost feels foreign! I suppose strep throat followed by a winter vacation will do that to you, no?!

Regardless, we returned from our snowy adventure in Wyoming/Idaho on Saturday around midnight….and y’all, I had a fantastic time! The past seven days have been so chock full of outdoor shenanigans that writing about them almost seems mundane. Naturally, I’ll give it my best shot, but let’s go with bullets, mmmmkay? 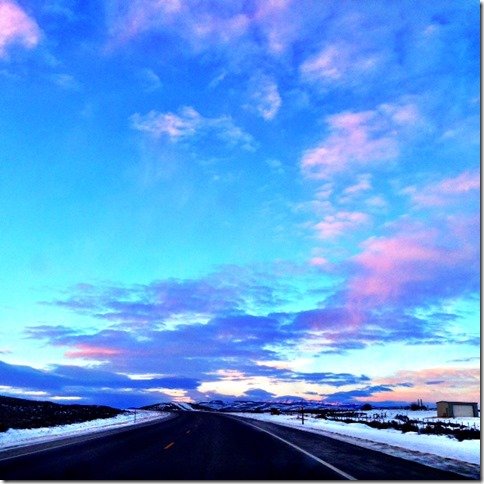 We piled in the cars early Sunday morning to begin the long trek north. Fortunately, I-80 across Wyoming was clear and we didn’t hit any snow or weather problems until we were just outside of Jackson. {However, we did find the world’s worst coffee at the gas station in Buford, a one-person town. As one of us learned, the coffee will make you throw up and feel like hell for hours!} We had looked at a few rental houses in Jackson proper but for the price, we couldn’t justify them. Instead, we drove over the ever-steep Teton Pass into Victor, Idaho and rented this beautiful, million-dollar mansion. We arrived at the house and couldn’t believe our luck; the house was stunning with plenty of space for all seven of us. Our master bedroom even had a massive sunken tub and a fancy, dual-shower! 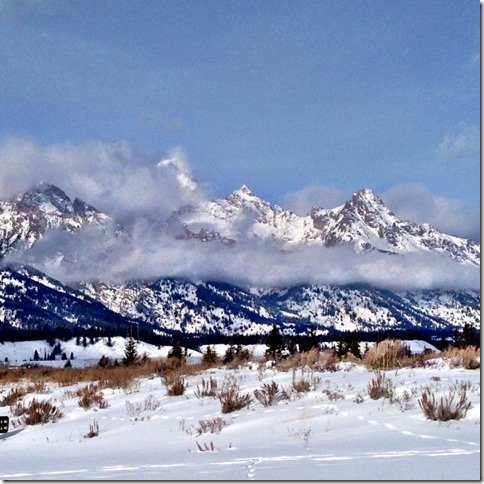 Monday dawned bright and sunny so we decided to head into Grand Teton National Park for a lil’ snowshoeing. We chose the Signal Mountain trail and enjoyed a couple hours of tromping through the fluffy stuff. Most of the trail was tracked and packed down, so it wasn’t my fave type of snowshoeing, but it was still a great way to stretch our legs and check out the park. After all, the Tetons are absolutely beautiful mountains and we were able to snap some good photos. 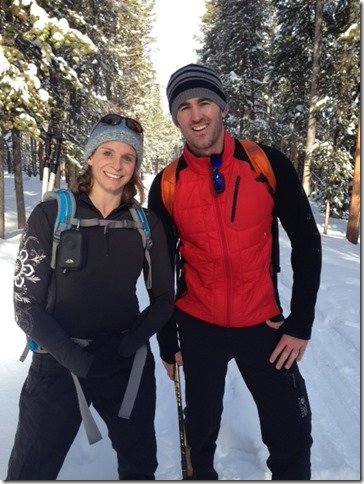 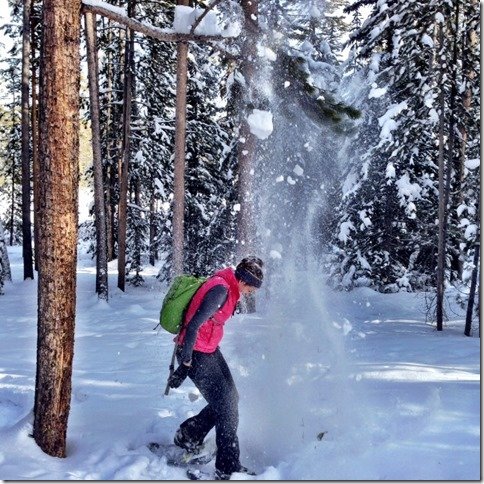 The other Katie, getting a cold surprise from above!

A few of us also chose to do some snowshoeing on New Year’s Day! Katie, Jon, Will and I decided to take in some more views so we got a tip from a local and headed to the Moose Creek area, a trail that was five minutes away from our house on the Idaho side of the border. They don’t plow the roads in the winter, so we essentially snowshoed from the road. Fortunately, not too many people were interested in frolicking on New Year’s Day, so the trail was almost deserted! 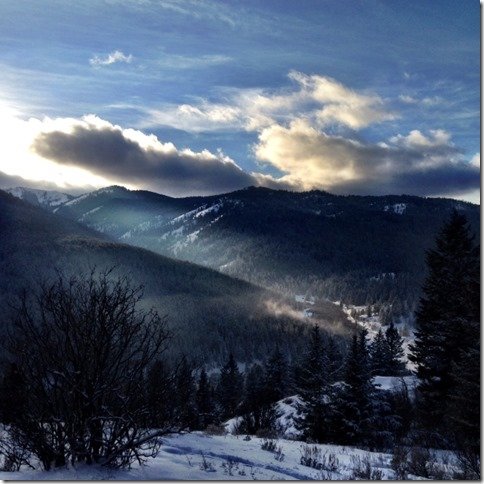 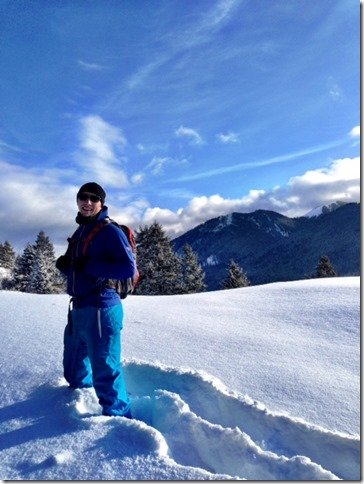 We stayed on the trail for 30 minutes or so, but naturally, our desire for adventure took over. It was time to bush whack our own path! We found the tallest hill in the area, pointed our snowshoes towards the summit, and started the snow-filled trek to the top. Like I mentioned, I don’t love packed-down trails, so this off-the-beaten path route was much more to my liking…and much more exhausting! The snow was knee-to-waist deep and blazing a trail was tough. I was definitely feeling my lungs!

I could cut this one short and just refer to this as “the day I couldn’t see my feet” but where would the fun be in that? 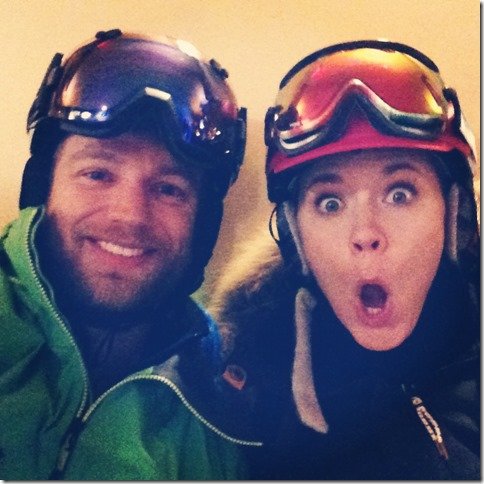 Will and me, waiting for everyone to get their rental skis

On New Year’s Eve, we all decided to head to Grand Targhee, a smaller ski resort north of Jackson. Sure, we could’ve skied at the more known Jackson resorts, but in reality, Targhee is a bomb mountain! They average 500+ inches of snow per season which is pretty awesome, and everyone always says the conditions are great. Plus, a peak season lift ticket cost ~$70 instead of $100+, so how could we pass that up?!

We made the 40 minute drive to the mountain and immediately, I knew the day was going to be interesting. It was puking snow, which was awesome, but the visibility was abysmal, at best. I’m all for tolerating bizarre conditions in the name of a powder day, but honestly, this was downright scary. I have never skied in such blind conditions and at times, it verged on terrifying. The clouds settled on mid-mountain, but since there weren’t any lower mountain lifts, you had to ride to the top in order to ski anything. In essence, this meant that 60% of each run was the equivalent of skiing blind. We couldn’t read signs until we were almost on top of them, and I even skied right off the lip of a run without even seeing it! Fortunately, I’m comfy enough on skis that I was able to save myself from tumbling, but it was pretty scary going unexpectedly airborne! 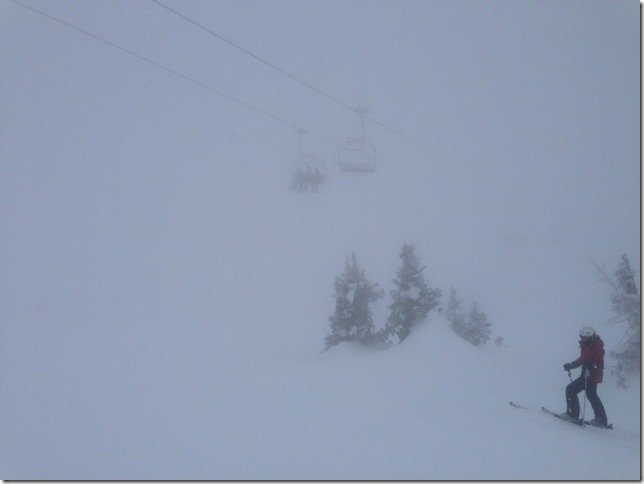 Katie, trying to figure out where the hell she should ski. Word to the wise: stick to the lift lines! 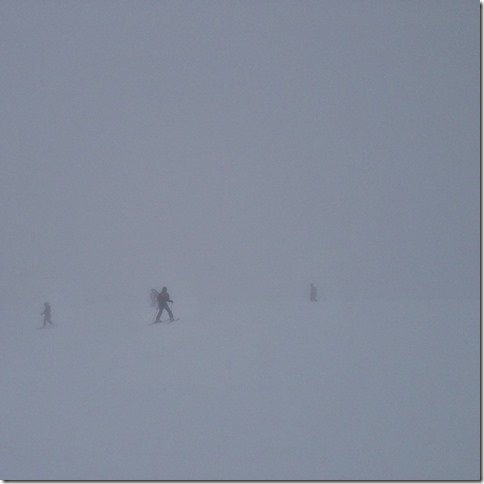 I’ve been a skier for a long time and can ski anywhere, but there were a few in our group who are still learning or had less experience. For them, stumbling onto a black run could cause some serious problems (and potential injuries!) As a result, we literally had to ski a few hundred yards, regroup to make sure we had everyone, and then begin the process again. The insane fog cleared on lower mountain so we loved the last bit of every run, but the upper mountain was so disastrous that it took a chunk of the fun away from the experience. In the afternoon, the clouds eventually thickened to the point where we literally could not see anything, so we decided to call it a day. According to locals, this fog is fairly normal and maybe it would’ve been easier to ski had we known the mountain better, but regardless, we had an awesome time. Definitely check out Targhee if you’re looking for a mountain with crazy snow!

I couldn’t conclude this post without at least mentioning where we rang in the new year! To date, this has to be one of the most random NYE experiences of my life. You see, we originally had plans to return from Targhee, clean up, and then head over the ever-scary Teton Pass to Jackson where we would frolic with locals to celebrate the coming of 2014. However, the puking snow that I mentioned earlier? It made the pass more than we wanted to deal with on a late night drive. 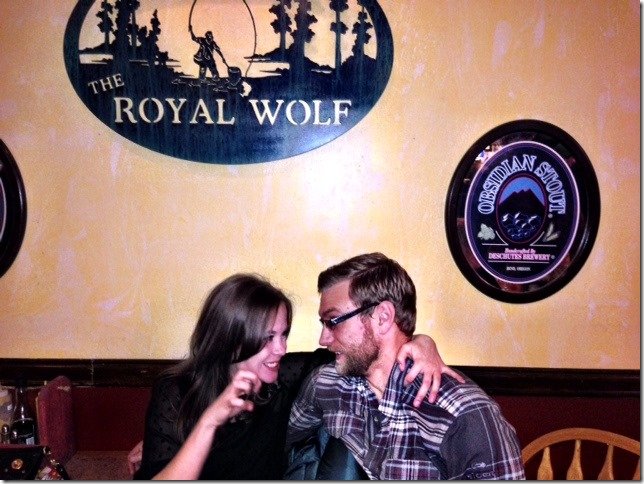 I think I was trying to be a wolf. Will was just scared of me!

Instead, we chose to stay local and drove the 10 minutes into Driggs, Idaho, a small town of roughly 1800 people. Katie called a few places, trying to find the best place celebrate, but it turns out that was unnecessary. There was only one bar in town: The Royal Wolf! (whose website I just found!) 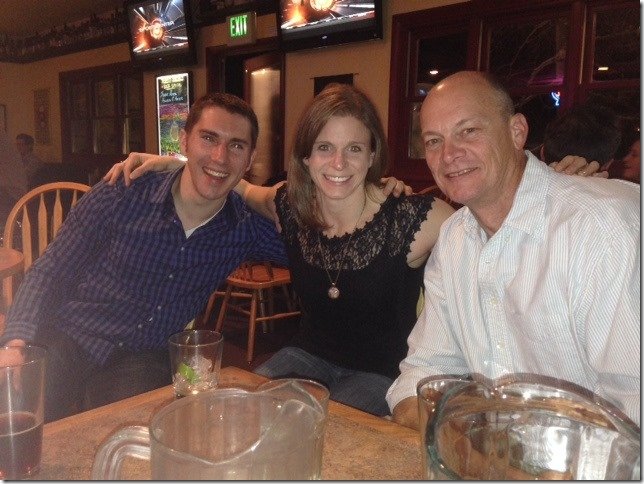 The bar was incredibly small but it had a warm vibe. It was clear that our motley group were the only unknowns in the room, but no one seemed to care. We spent the evening shooting pool (with a man we later discovered may or may not be a Crip!) and had some insanely cheap beers. Brad and Katie are from Los Angeles, and they were beyond shocked at our bar tab. Apparently beverages in Driggs cost significantly less than drinks in LA! Regardless, it was a mellow way to ring in 2014, but it was perfect, and our group had a fantastic time.

What did you do for NYE?

Any adventures that I missed? To be honest, I had a bazillion posts in my BlogLovin’ reader….that I deleted. It was too overwhelming! Catch me up on fun stories!

That Christmas I Spent With Medication

The Columbia OmniGames: They’re On!